Environment
Immerse yourself in a deep, vibrant, cyberpunk style atmosphere.

Freedom
Once the arrival shuttle doors open to the city you're free to do as you please. Remember that every action has it's consequences. It's up to you to determine how to survive.

Survival
Accomplish the daily activities to keep your character strong and healthy. Eat, drink, sleep, and cleanse. Gain knowledge and adapt to your surroundings. Lock your doors.. Hire bodyguards.. Keep a low profile.. there are many strategies that will help keep your character alive and out of danger.

Combat
Engage in hand-to-hand combat or equip various weapons to take down your opponents.

RPG Elements
Practice and enhance your skills to increase the overall effect of your abilities.

Employment System
Combat and violence is not the only way to earn your keep. There are many individuals and organizations alike that are willing to hire. Choose employment that best fits your playstyle as you may increase skills related to your occupation.

Syndicate Management
Create and grow your own syndicate. Hire agents to carry out and execute requests. Take part in the manufacturing and trade business to expand profits. Sabatoge your rivals and take control of territories in order to increase income and expand.

Galactic Exchange
All corporate securities are traded on the Galactic Exchange. Within this market players may buy or sell stocks, given they have the appropriate credits.

Card Game
The most common strategic card game played across the galaxy. Competing for credits is not recommended until the game is properly learned.

Three Main Factions
Each faction has a unique relationship with one another. Doing 'favors' for one faction will have adverse effects on the others.

Citizens are available to recruit into a Player's personal Syndicate Squad. There is only an initial recruitment payment with no periodic maintenance payments thereafter. A squad may consist of 3 of three AI members maximum. Squad members will follow the player and attack upon enemies. Issuing squad orders and member ranking are features to come. 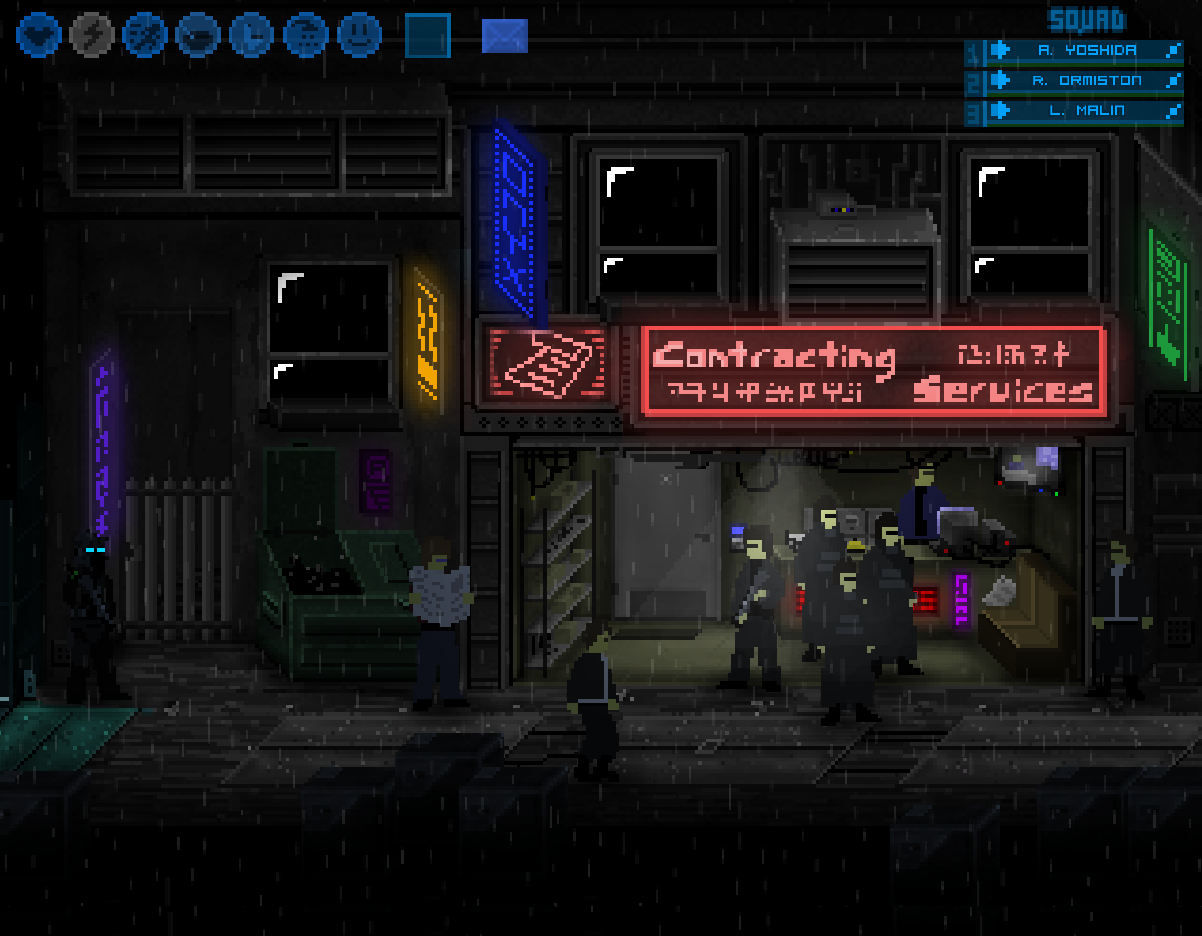 Also known as a scanner implant, the (ONI) allows the user to determine another individual's identity along with other information stored within their personal data chip. This information is then presented visually to the user through the implant's nano interface. The ONI leverages the use of biochemical energy nanotechnology, and neurotechnology to retrieve and transmit data to certain areas of the brain. 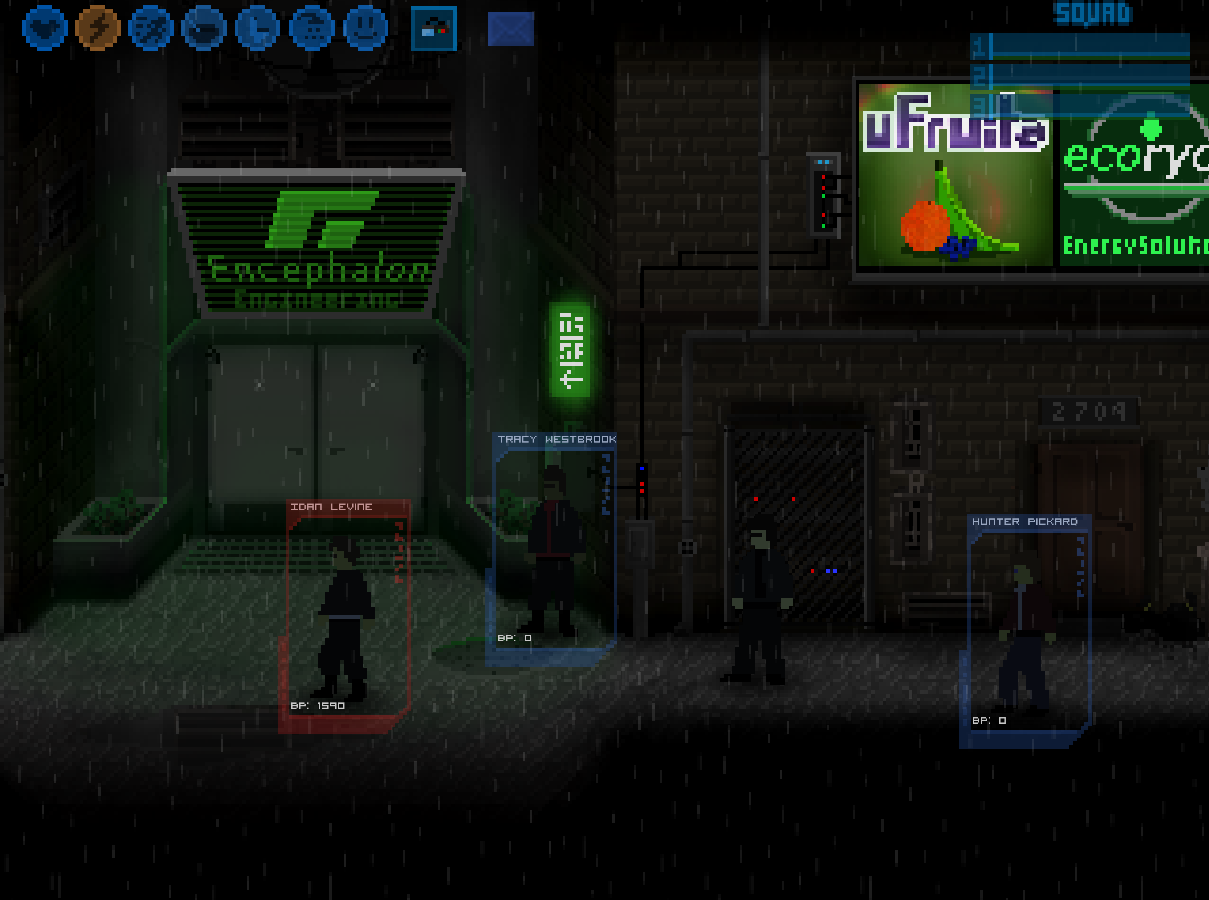 The accumulation of bounty points has been added for citizens. Bounty points are acquired when a Citizen's action breaks local regulation. Attacking different types of individuals will have different impacts on the amount of bounty points received. This opens the possibility for various bounty contract types. Citizens that have accumulated bounty points are fair game for bounty hunters, and may be arrested/killed for contract fulfillment. Citizens who are arrested are transported to 'Redemption', an off-world correctional facility, which functions to house all arrested criminals within the galaxy. The only way to leave Redemption is to either work off the Bounty Points, or attempt escape.

Introduction of Bounty Hunter characters. These individuals, dressed in brown and green, make a living by hunting down individuals who have acquired bounty points. If you have accumulated an amount of bounty points, low or high, they will attempt to arrest you for Credits using the ONI. So, avoid them if necessary. Control nodes are resource database terminals that represent the ownership of a specific area/territory. These nodes can be found throughout key districts of each city. Factions or Syndicates may acquire ownership of a control node by hacking it. The owning faction/syndicate will inherit all the income generated for that specific territory. The revenue stream consists of local property taxes and maintenance fees paid by residents living in that area. Typically a headquarters coexists with a control node. A headquarters can be used as an area of Operations for each syndicate. (More details on AO's will come to light in future updates). 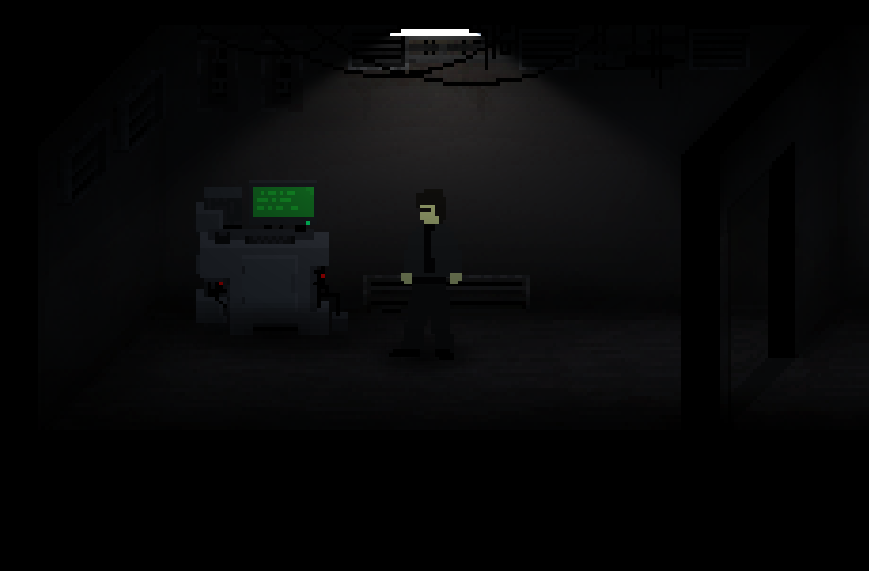 Player damage and death has been implemented along with some visual effects (blood splatter and cinematics). In future updates, Players will be able to save their progress by sleeping at any of their purchased apartments or hotels.

A small yet very enhancing visual. Rain puddles may now be found around certain areas of the city. 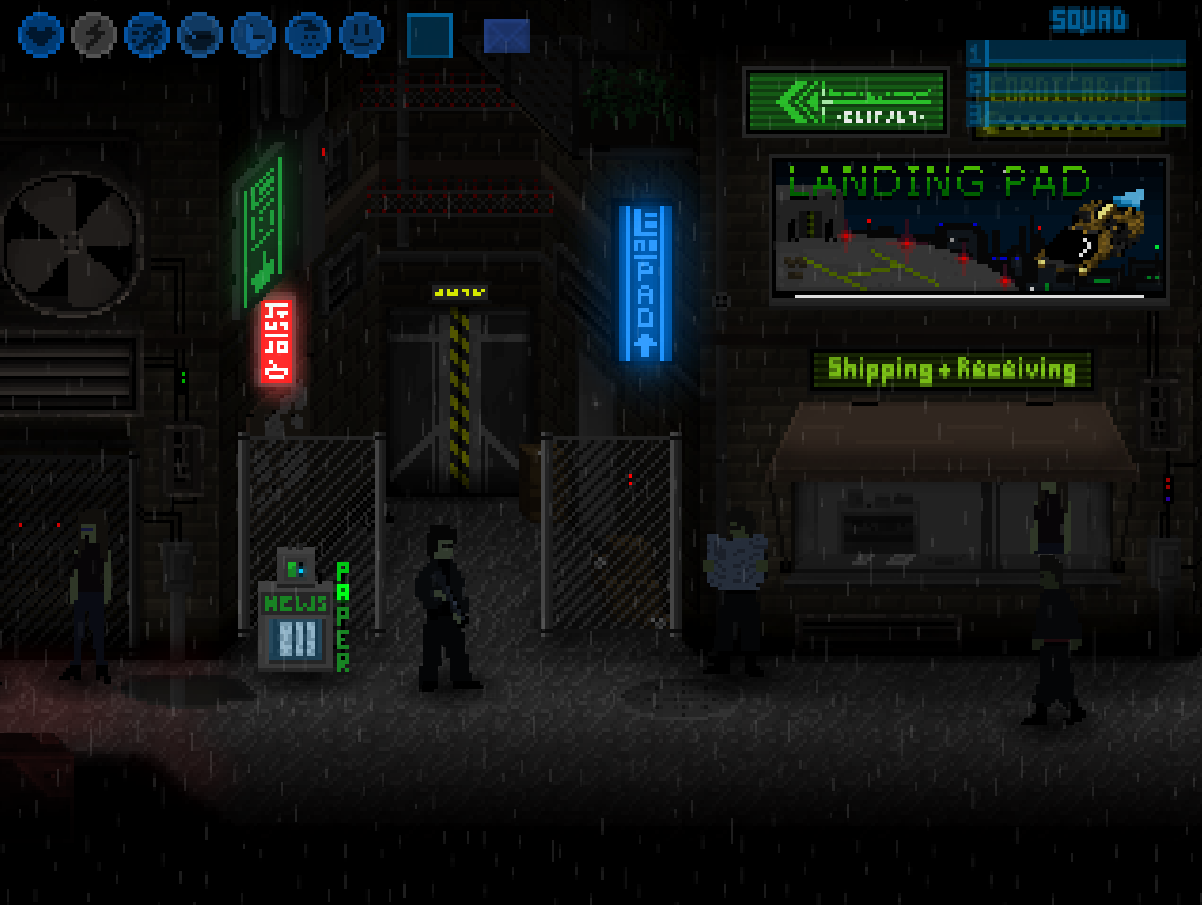 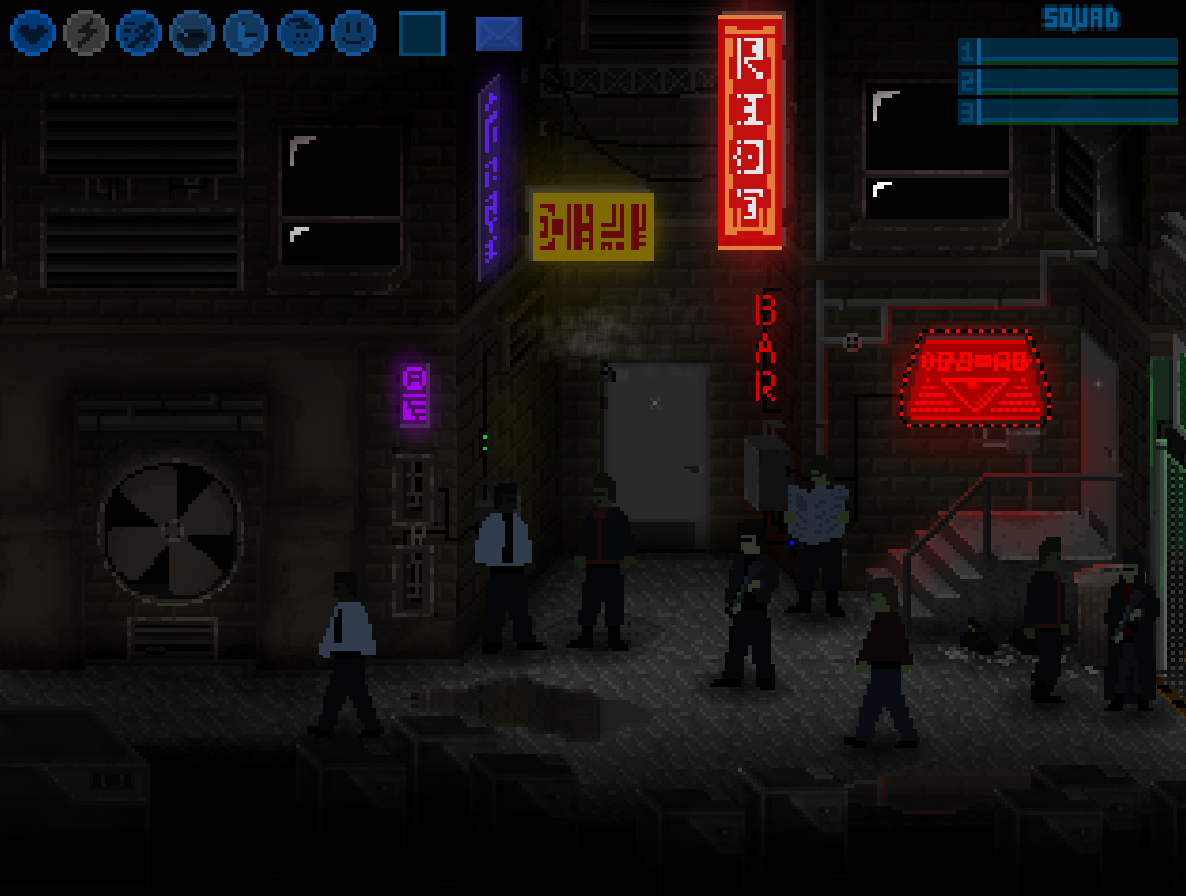 There have been several additions to the in game dictionary which provides more info and lore about the Proxyndic universe. The dictionary can be quickly accessed via an individual's Holographic Data Assistant (HDA).

The Gromada have established their headquarters within the Area 9 Slum District. The territory control node resides inside the headquarters. The building itself is a small abandoned warehouse which the Gromada use as an Area of Operations (AO's) for drug trafficking and recruitment. 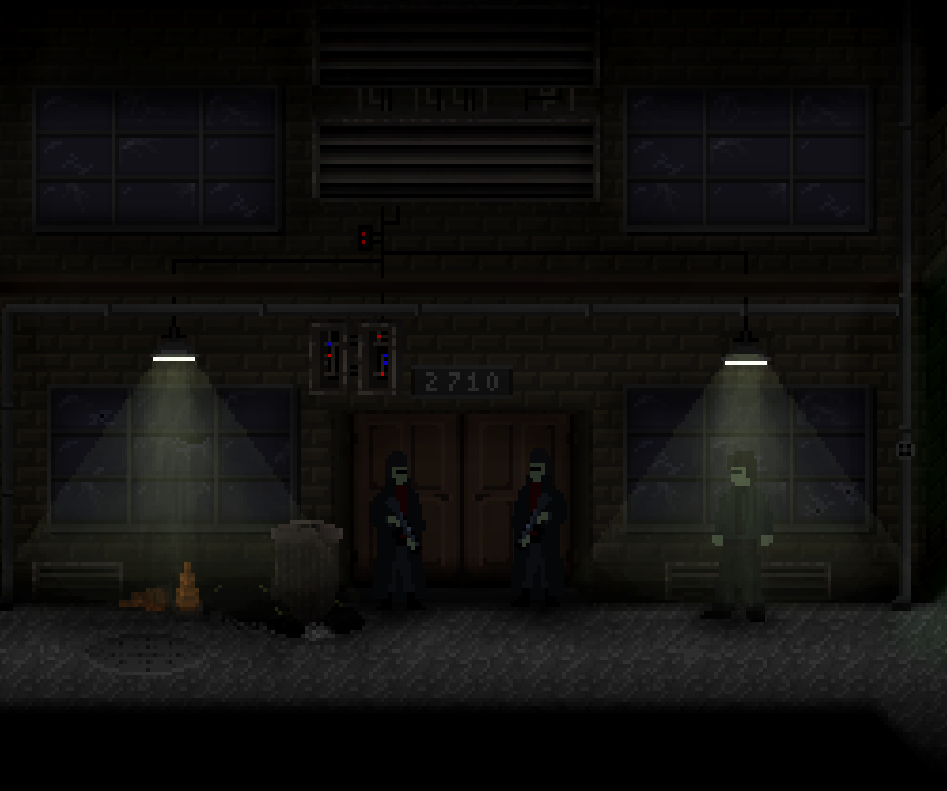 There are now newspaper dispensers and candy vending machines found throughout the city. The food that vending machine dispense act as booster items which will satisfy hunger. 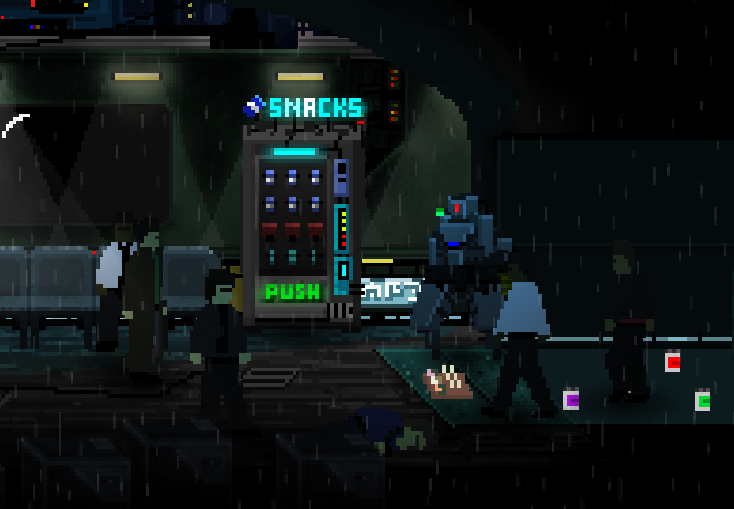 Trade may now fully be conducted through the chat interface with Shopkeepers. The types of products and services these dealers provide are as follows: 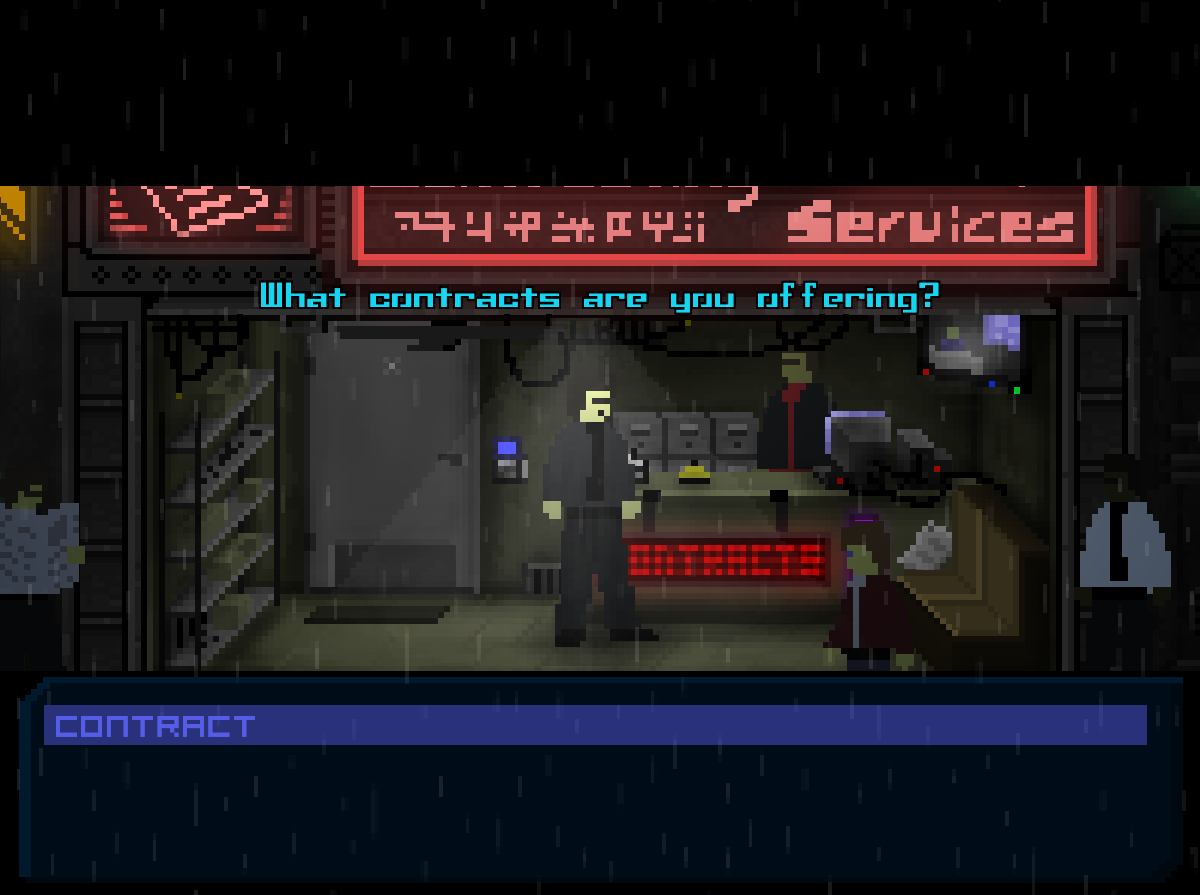 Apartments can now be purchased from Front desk workers at hotels/apartment complexes. After speaking with an apartment rep, they will issue you a key specific to your apartment room.

Placeable Shields function as a traditional item that can be placed on the ground. Once placed, a tall barrier will arise that provides protection from projectiles over a specific period of time. Once the time duration expires, the shield is distinguished. Characters may lean up against the shield, using it as cover at any time. Placeable Shields may be purchased from an Item's Dealer. 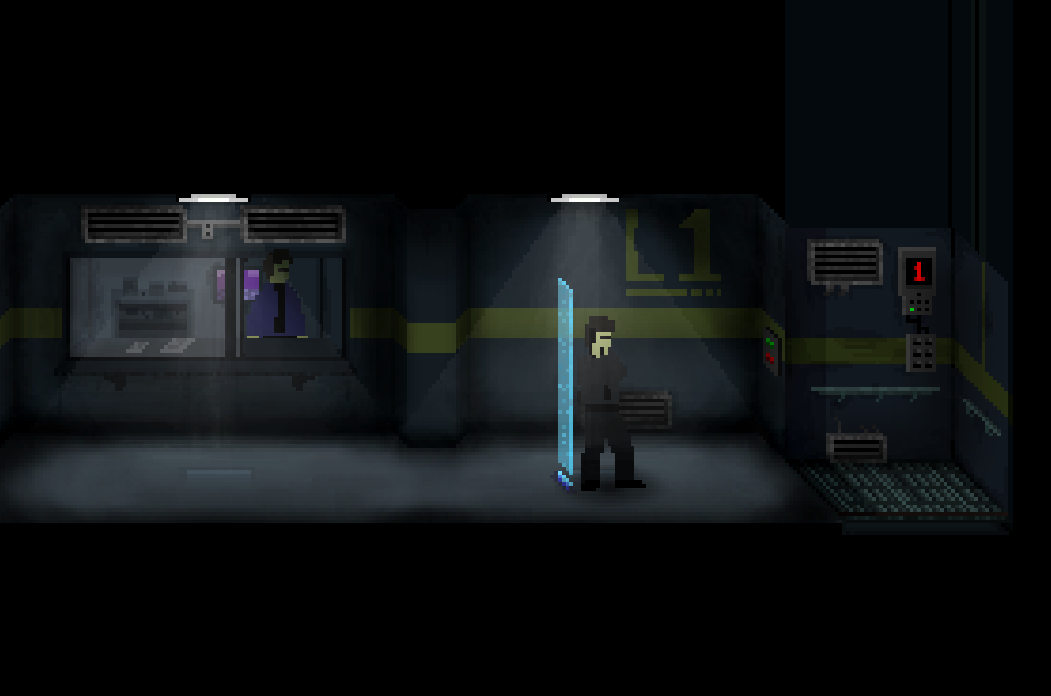 A full list of in-game drug names and stats can be found on the Wiki.

Note: There has been a HUGE number of bugfixes that are not documented in the list below:

The new years update for Proxyndic is here! Below you will find the entire list of changes, additions, tweaks and bugfixes. Dont forget to subscribe and...

Tracking. This reminds me of gunpoint a bit.

hey man i have to ask, the map its hand made or its procedural?

As right now, each city layout is "Hand made" and not procedural. However, things may change in the future as city layouts are not quite finished yet.

yay!! (also how goes the counting in the steam thing i really want to test it >w<)

The Business Men Steam group numbers are relatively low at the moment due to the group being quite new and all. But rest assured, in time I believe we will reach the 1000 member goal for a demo to be released. You may help by simply spreading the word. Tell you're friends about the game and anyone who may be interested. It is entirely up to the community to see that Business Men succeeds.