Master your mounted and on foot combat skills, choosing from a vast arsenal of medieval weaponry including polearms, axes, swords, bows and many more. Serve as a vassal under a powerful king, or raise your own armies and compete for domination of Calradia.

Mount&Blade gives you the ultimate freedom of gameplay. Explore the vast sandbox environment, visiting hundreds of unique locations and characters.

Devblog #2: The Grand Army of the Republic

Progress on the mod is still going strong, we've brought on some more members and our team is bigger than any of us could have anticipated. We now have a 30 member development team, full of very talented people with one goal in mind; make the most ambitious Star Wars mod for Mount and Blade, and make it an unforgettable experience for thousands to enjoy. Now, on to what was mentioned in the title, the Grand Army of the Republic.

The way our mod will handle clones will be different from the other Star Wars mods for Mount and Blade. There will be 3 different types of clone recruits, ranging in rarity and price of ownership, from lowest to highest they're ranked: Clone Cadet, Clone Academy Cadet, and Fett-Trained Clone. Each base clone trooper branches into their own troop trees, exclusive to each base troop. We will have a total of 32 different troops for the Grand Army of the Republic, each playing a role on the battlefield. Whether they're riding into battle on an AT-RT Walker, or eliminating threats from across the field of battle, there is a troop tree for every role the player could want.

As for the uniforms your clones will wear, you have many options to choose from. When you reach the rank required to command your own army of troopers, you will be presented with a choice. You can choose to have all of your clones represent the: 501st Battalion, 104th Battalion, 212th Battalion, 9th Assault Corps, 327th Star Corps, and the 91st Reconnaissance Corps. This decision will not be permanent and can be changed in-game. This change was necessary, as the troopers you had in previous Star Wars mods for Mount and Blade lacked a coherent uniform, and we would like to remedy this through our new system.

Here Are Some Visuals of the Troop Trees: 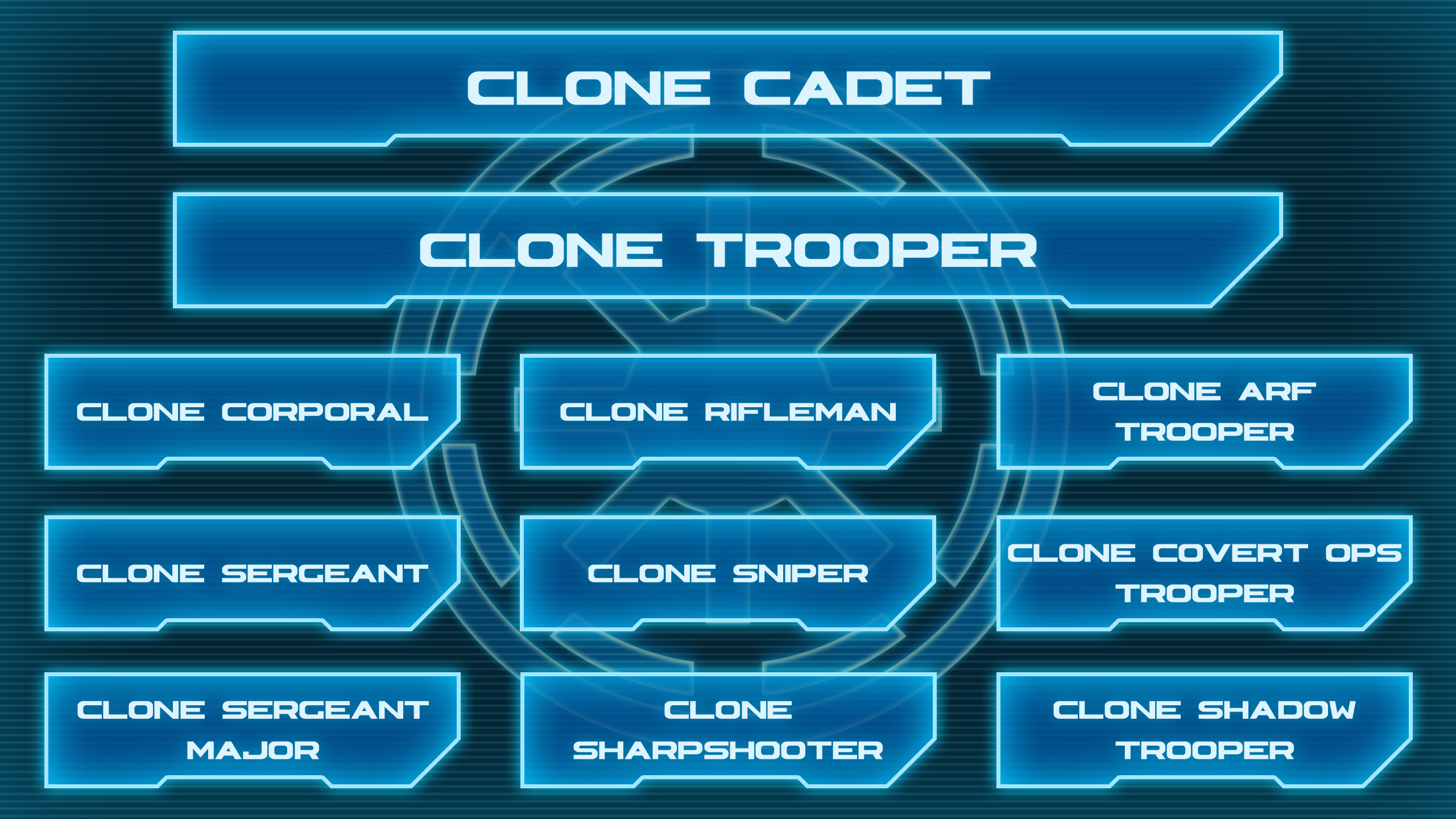 Breakdown: Branch 1 are upgraded versions of the base clone troopers, increasing in all stats the further down the branch they go. Branch 2 are long-range clones, each getting a better weapon than the previous troop. Branch 3 are specialized units, who excel at flanking and taking the enemy by surprise. 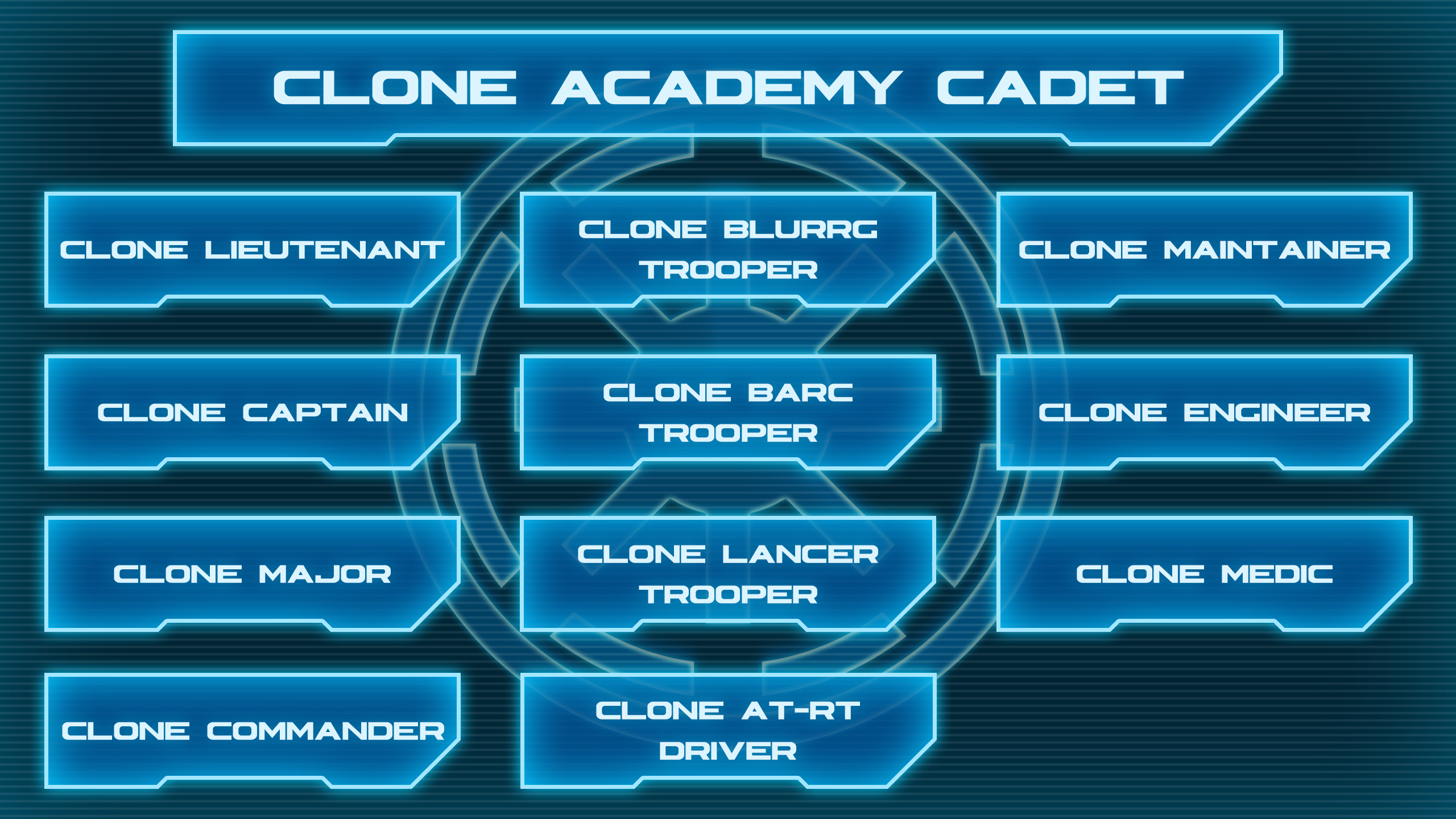 Breakdown: Branch 1 are upgraded academy cadets who grant the player a buff to their leadership skill. Branch 2 are mounted infantry, who dominate the battlefield with their swiftness. Branch 3 are support units, the maintainer and engineer will repair vehicles while the medic heals and buffs nearby units. 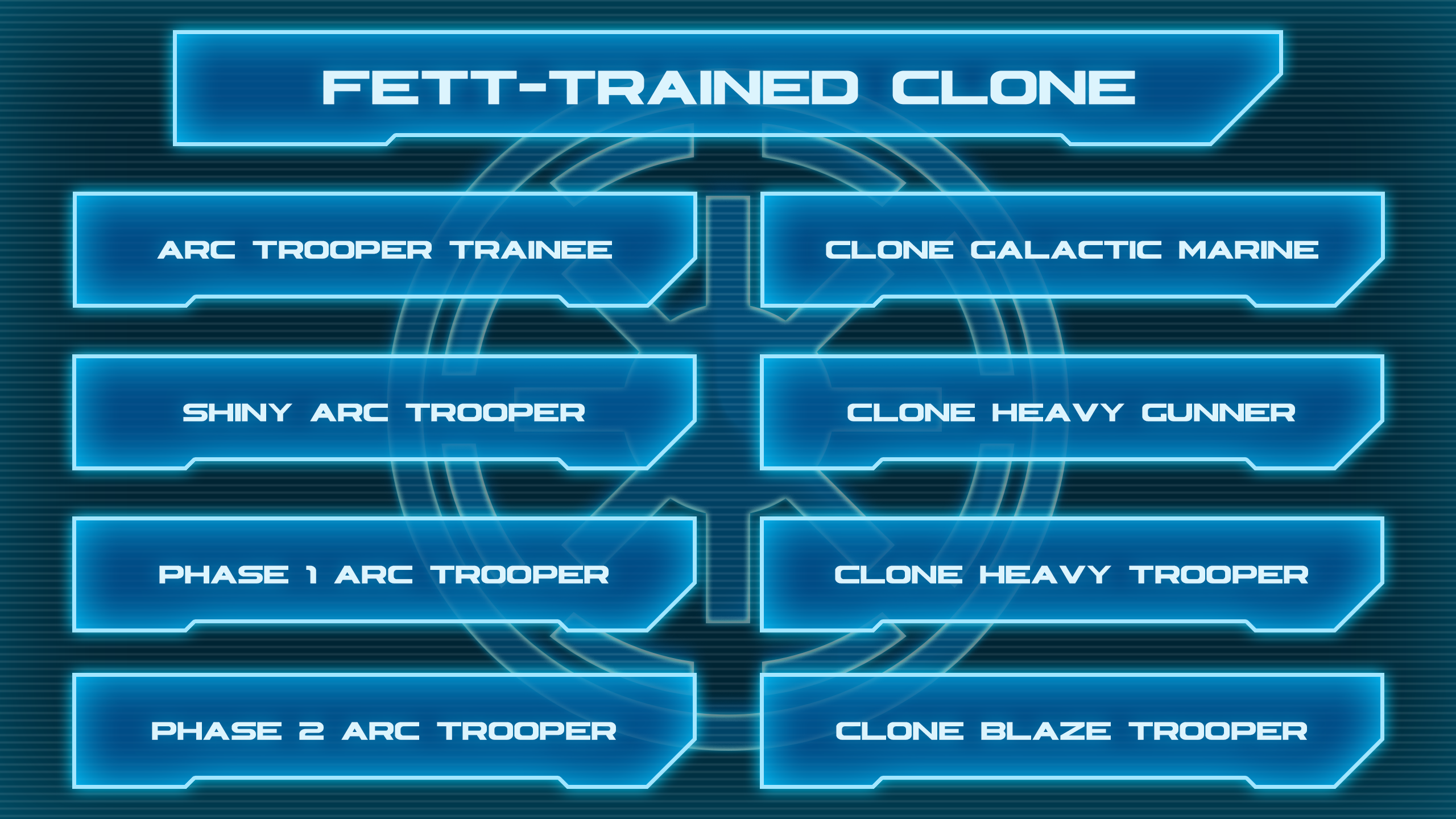 Breakdown: Branch 1 are ARC Troopers, who will best any melee combatants, and other enemies who dare to get close. Branch 2 are crowd-control/tanks, they absorb damage and disperse clusters of enemies with heavy weapons.

*Disclaimer: Advertised Troop Trees are Not Final and May Change*

The keen-eyed among you may notice there are no Clone Commandos on the troop trees, don't worry, we did not forget about them. Clone Commandos, such as Delta Squad, and certain ARC troopers, like Fives and Echo, will be companions rather than basic troops. This move was made to add to the story aspect of the mod. They will all have their own quests that will lead to them joining you on your journey across the galaxy. This will also allow you to have more control over their equipment and training.

I hope you enjoyed this update on the development, know that we are working hard to deliver on all of our promises, but naturally some things will not be possible due to limitations within Bannerlord. But, we will do our best to revamp the game and make it fit our aspirations. We listen to all suggestions made by the community, and if you would like to make a suggestion, please join us on Discord: Discord.gg

Mount & Blade II: Bannerlord will be released in Early Access on March 30th 2020.

a new project for the mount & Blade Warband game we are looking for a few modders to join the team at the moment the most important would be a mapper...

So the biggest modded game on ModDB is free for a limited time on GOG. Grab it while it's hot!

The political system, all vital information off stuff like governers and provinces

This is a Decompiler which you can decompile the MB 1.011 files

Source code for this module, released as i am ending the development and shifting my interests elsewhere, including the Warband version

About to cease development of this mod version, so i am releasing it's final version and source code

My attempt to balance out the infantry in relation to cavalry and make things a bit more realistic. See the description for details.

Is there any mod that adds the Sarranids to the original Mount and Blade?

This is where it all started...

Is there any World of Warcraft mod out there?

what is wrong with warband?

My old pc does preffer the old one too <3

Nothing is wrong with warband but sometimes i prefer the good old Mount&blade.

Now that Warband is out there, i can't just forget the good old M&B.
With it's unique style, this game provided more than five years of the best medieval-style RPG, only to be bested by M&B Warband.
Realistic.
Detailed.
Moddable.
What more can be asked?