Gravity Battles is a java update of the retro classic 'gravity wars' on the Amiga and IBM PC. The game is best experienced through multi-player game-play. Two players or more, can battle it out on one computer in a turn based strategy battle. Unlike other artillery games, all shots fire at once so order of play is not important. The game supports up to 12 players, human or computer controlled, and 16 planets/stars. When I originally wrote the game I called it "Death Star Battles", but I'm simply calling it "Gravity Battles" now. I am working on a sequel, Mammoth Gravity Battles which is a modern 3D version for Mobile and PC, look for it here in IndieDB or visit the website www.mammothgravitybattles.com . Mammoth gravity battles will be released on Android very soon.

When playing: each player uses the sliders at the bottom to select an angle and power with which to fire a projectile at the opponent's death star stations. When the desired angle and power is achieved then press the 'end turn' button to let the next station else aim and fire. When everyone has chosen the angle and power ALL the missiles are fired at once and the resulting chaos can be watched. The projectiles are effected by the gravity of the planets and stars. If you feel you are in a bad location the hyperspace button will randomly teleport you to another location at the end of that turn, this is instead of firing! Click hyperspace, which will change the display from showing your angle and power to "hyperspacing..." and then press the end turn button. 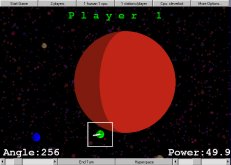 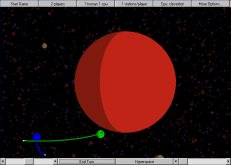 Instead of selecting angle and power with the sliders you can just click in the circle around your station. There are also keyboard controls as follows:

There are a variety of different options to chose from. Click on the buttons at the top to cycle through the options and then press the start game button to begin.

Hints and tips to fighting a better galactic war

While not being a completely educational game, it does have some learning value, teaching a little mathematics, physics and estimation. After a little practice you learn an intuition as to the approximate trajectory of a shot.

I've been working on the single player campaign/story mode for Mammoth Gravity Battles. The story mode guides the player through all the games exciting features one at a time, trying not to bore or overwhelm. Its a balancing act. Each of the 50+ levels is a new challenge, introducing a new kind of battle, target, weapon or environment. Some levels at the start will be very easy to complete and unlock the next one, but achieving the full three star rating will be more of a challenge and will require multiple attempts.

Starting in a quiet backwater, war soon threatens the Mammoths:
The first sector of 12 levels will be as part of the Mammoth Deep Space Mining Corp, a rough bunch of mammoths who spend their time in the planar asteroid fields on the edge of the galaxy. These missions will gently introduce the most important aspects of the game, although they are not training missions, there is a separate "mammoth school" sector for the tutorial. All the mining missions will be on 2D maps and feature one mammoth ship to control and simpler weapons. The first couple of missions are asteroid mining work; tag selected asteroids with markers and crack them with mining explosives. After not long bandit mammoths present a problem that needs resolving and a more sinister plot is discovered, war is likely to result.

When war does break out, things get tricky fast:
The war missions are more demanding, with multiple ships to a squad, tactics become more important and the introduction of fully 3D levels adds another dimension to the game-play (obviously). Further types of environment keep things changing, as do escort and convoy attack missions and rocket turrets and bases. Its here we first meet the deadly cruisers, large armored ships that can fire two shots per turn.

The war extends to other nations:
With blue and yellow mammoths dragged into the conflict, the missions become highly tactical affairs as three or four teams fight together. The war will only be won if suitable alliances can be formed and then one by one the enemy nations defeated. Ending in a suitable boss-style battle, this should feel like a significant achievement.

Mammoth Games:
Following the wars the nations of mammoth decided to hold gladiatorial games to resolve disputes, preventing further conflict. These games are an excuse for pure dual style battles, played over multiple rounds with scoring within the story mode. Expect each level to be harder than the last and the final battles to be extremely tough just to win, let alone score a top rating.

Balance of Power Turn Based Strategy