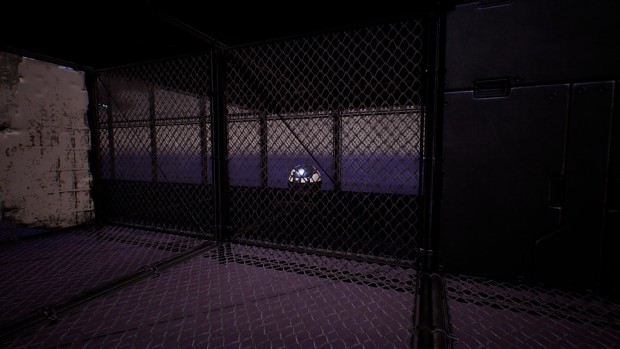 A glimpse of combat in 《Drifting》

As players progress through each level by throwing objects around to unlock the next challenge, at one point, they will face a peculiar challenge - throw an object to where they can see through but cannot aim directly - throw object behind a barbed fence.

It is intuitive to throw an object forward to where the player could aim at, however, the game provides another way of throwing: sidewards and backward throws. These two types of throws although appear similar has different underlying mechanics. Compare to forward throw, sidewards and backward throws are target-oriented throws. As the player throw sidewards or backward, the game will perform a large area box trace and filter out the "appropriate" target to throw the object onto - a complex process involves distance check, angel check, target's tag (type) check, collision check...etc, to ensure the object is thrown to the intended target.

Throw behind fence fully utilize the idea of target-oriented throw, since players cannot aim directly through fences, throwing sidewards or backward seem to be the more appropriate choice here. As I explore this idea, it opens up a wide range of gameplay possibilities - one of them is a puzzle where players need to throw an object onto an elevator; turn on the elevator so it reaches the second floor; from the first floor, throw the object from the elevator to another elevator at the far side; bring that far side elevator down to get to the object - an example that reflects the intricate dynamics between players and the game mechanics.

I hope you enjoy this week's update, have a wonderful weekend! (づ′▽`)づ