Up to four human or AI players

Fight with arbitrary ships or fleets common to all players. Or team up with other people against the AI opponent. 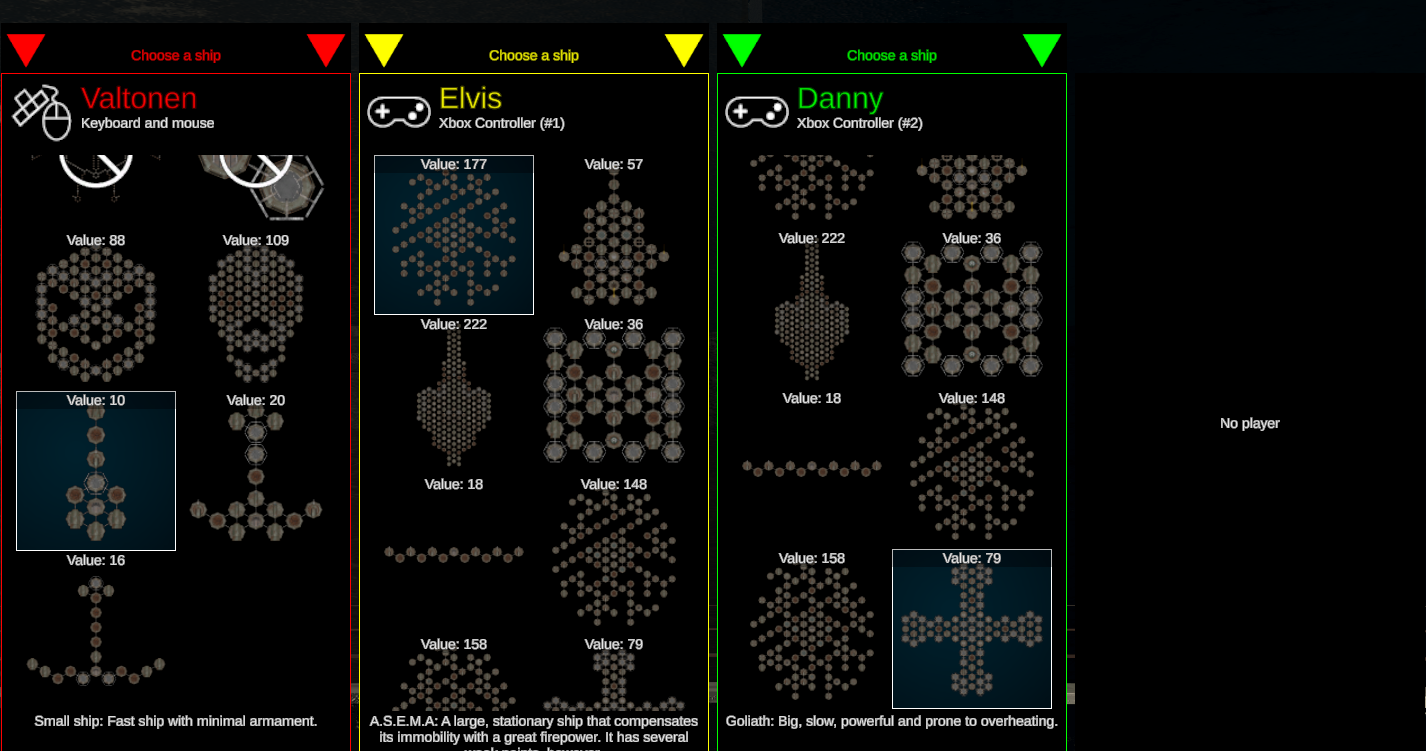 Every system in the arena affects everything. Each part of the ship is simulated individually, which leads to constantly changing maneuverability and game balance as they get detached or destroyed.

Build and share custom ships or test and modify existing ones. Large collection of armors, thrusters, energy sources, weapons and other gadgets to choose from. More coming regularly.

and quantity over clarity -audio. But getting better.

Tons of bugs to explore and exploit

Bug reports and other feedback is welcome.

In a distant future

It's been over half a year since the previous version. My intention was to implement and release things more frequently bit by bit, but this bit got a lot bigger than it was supposed to. Whereas version 0.5.0 concentrated on better 3D models and graphics, 0.5.1 is more about gameplay mechanics, controls and overall usability.

Up to three players can now team up against one AI opponent. Battle ends when either AI or all humans are destroyed. Beware: friendly fire is a thing. 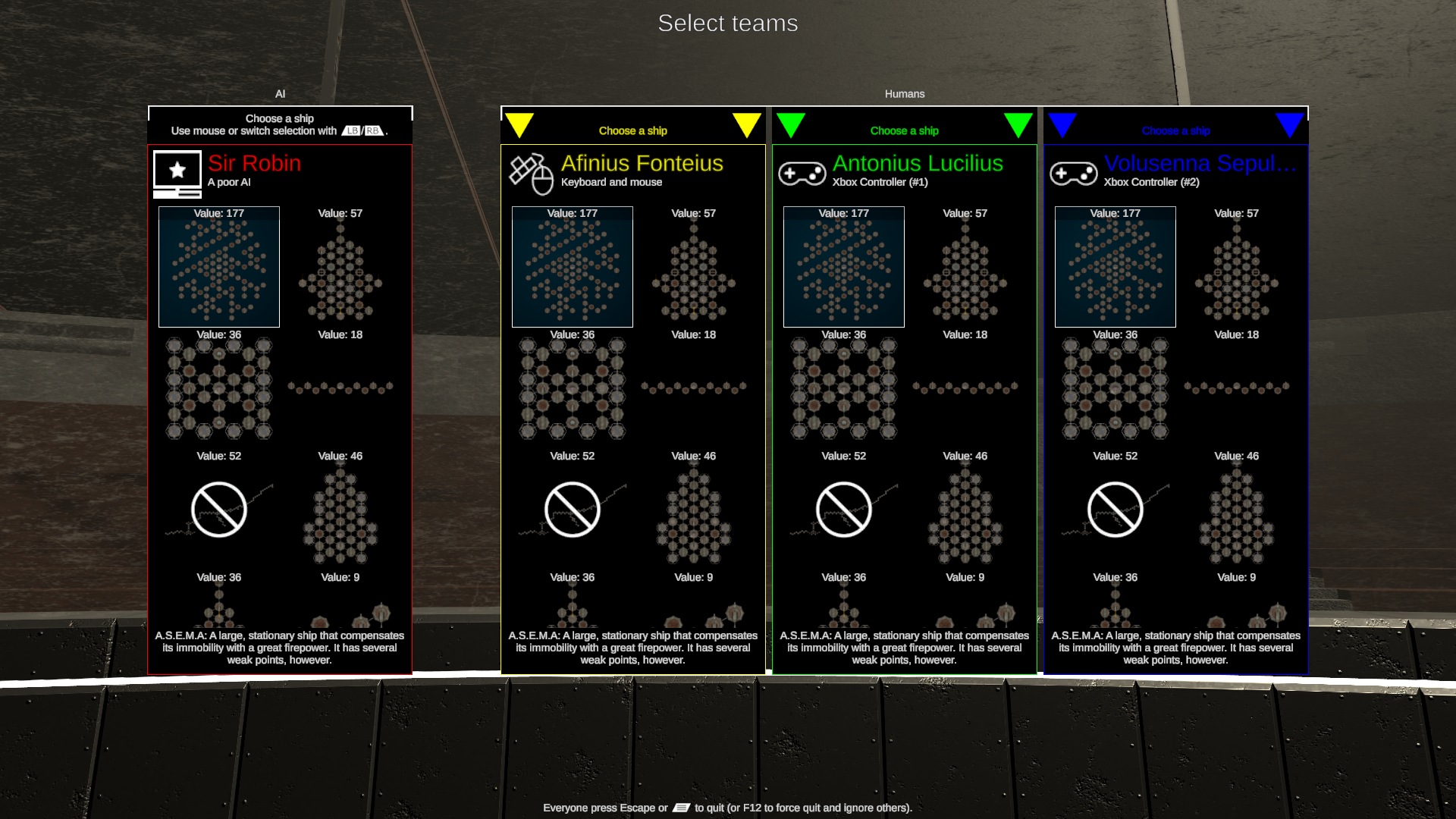 There's not as much new cosmetics as in the previous version, but the arena and space background have been improved a lot. I also fixed tons of small glitches, though many still exist. 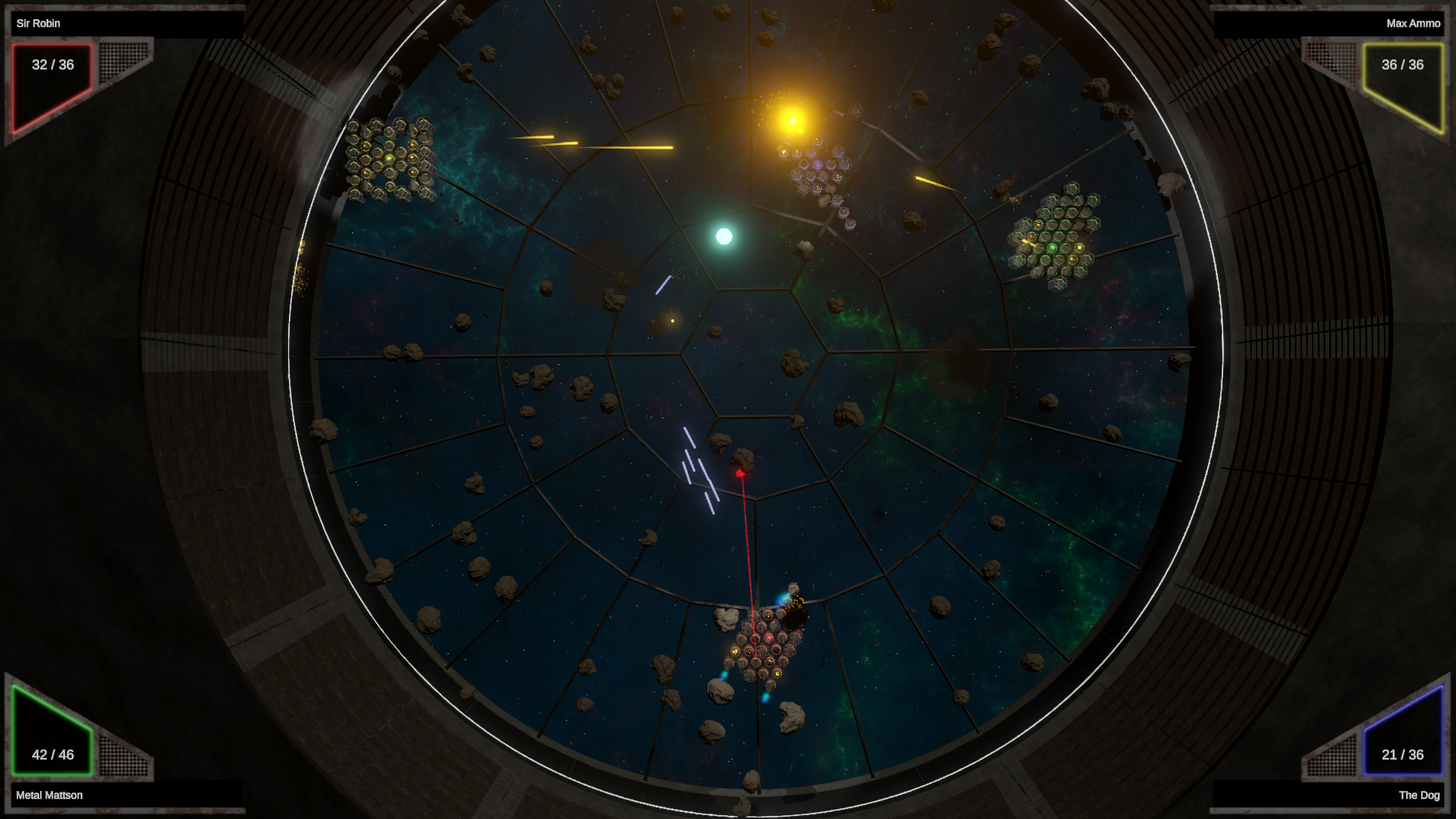 Device handling is completely rewritten using Unity's new input system. Keyboard, mouse and gamepad controls can now be rebind, device (dis)connections are handled in real time and gamepad rumbling is used if it is supported by the device. In menus, gamepads act as a virtual mouse. Instructions should be available where needed.

The game should be fully compatible with Windows and Xbox controllers. Other platforms and devices should work also, but may suffer some deficiencies. Feedback is highly appreciated on this. 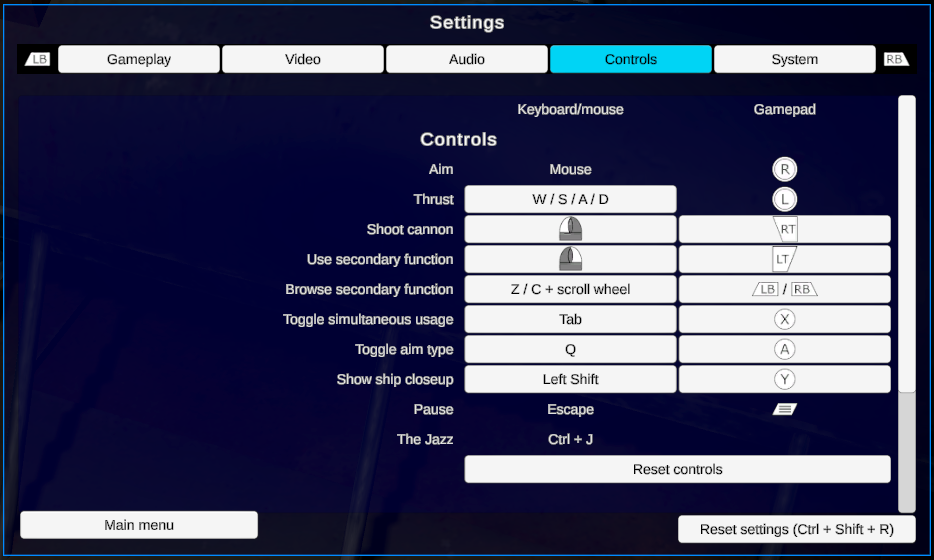 The settings page (shown above) is now also available in pause-screen. In the main menu, a tutorial page is added to explain the core game mechanics (tutorial arena still needs work). Menus should be fully usable with gamepads, although the user experience may be far from perfect. 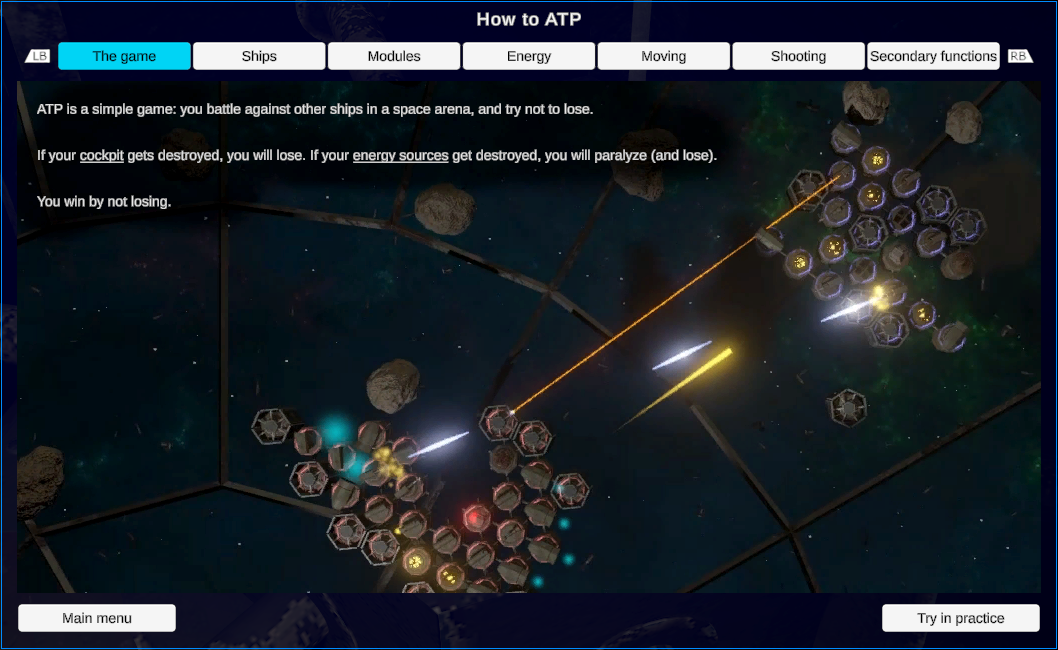 Battle UI is also improved. Player widgets are moved to the corners, which leaves top and bottom of the screen free for info texts.

Additionally there are now gamepad-friendly selection widgets, lots of new instructive texts, more consistent shortcuts for both keyboard and gamepad etc. Code base is refactored to allow future decorations and extensions.

Old build-in ships are replaced with ships that are more balanced, more specialized for their purposes and easier to use. As an extra, there's a big stationary ship that is recommended for the AI in coop-mode.

Modules have more variation in their properties, which offers better balancing and more interesting gameplay. Losing the ship by accident should no longer be a major issue; for instance, exploding reactors don’t necessarily destroy their neighbors anymore, and energy balls only paralyze modules. Many module types have unique specialities that require free text to be explained. 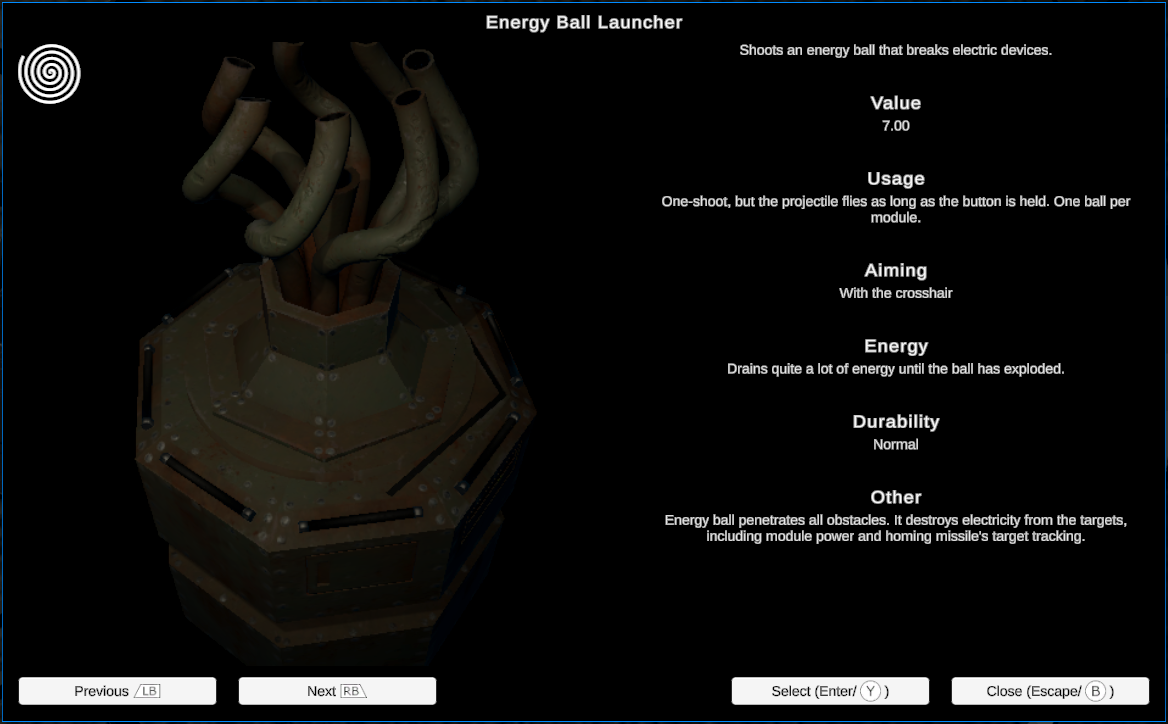 Summer is coming and heat tends to slow down my progress. There are lots of interesting new things to study for the future enhancements, so the next version will probably be out in the autumn. Nowadays I'm writing a weeklyish dev diary where you can follow the development process.

Here are some of the things I'll be concentrating next:

About creating hard-surface models in Blender, texturing them in Substance and animating them in Unity.

How I managed to handle models with transparent and emissive surfaces in Blender, Substance and Unity. We will create grid models, generate translucent...

From The Depths Combat Sim