A Top-Down Strategic Space Exploration Game Of Infinite Proportions where Star Trek Meets Ultima!Pursue combat, quests, and loot in an ever-expanding universe, or set your sights on any of five completely different paths to victory! Trade commodities between sectors, discover schematics to craft powerful items, and hire officers and level up their skills. Befriend alien races, help them reach their goals, or just kill kill kill!

The End Of An April!

I said I'd finish A.I. by April. Then I pushed that back to mid-May. Now it's looking like late May. But progress is happening! I am planning another beta release to existing testers, and toying with the idea of giving all backers a short window of opportunity to download it as well, so you can get any last minute feature requests in!

The racial quest lines are done, and you can win the game 8 different ways!

There are now 18 playable ships in the game, 14 of which need to be unlocked. 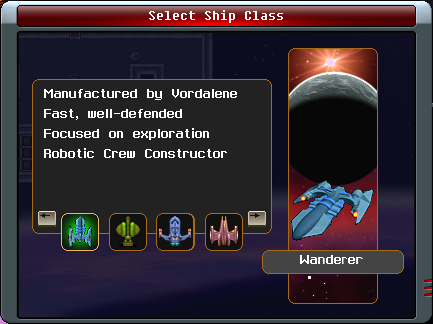 There is a working achievement system, tracking 132 entries!

The soundtrack is almost complete!

There are new monsters, powers, devices, and areas!

So have no fear, Approaching Infinity is coming. Just not quite as soon as I had hoped. But the delay is to make the game better, which I'm sure you can understand.

It's crunch time for Approaching Infinity. Release is about a month away, and my wife and kids are out of town for a few days. So, I'm putting the hammer...

From the very beginning, the development of Approaching Infinity has benefited from positive and detailed play-tester feedback. Many features have come...

Approaching Infinity Beta 04 has been released. The demo is available here on indieDB. The full version is available from itch.io until 04/11/14

I recently added a chance to discover treasure rooms on shipwrecks in Approaching Infinity. They are randomly placed lock and key puzzles, both high risk...

This looks really great, exactly my kind of game! Any news on the next update release?

Final 48 Hours. 4 stretch goals met, but the best ones are still ahead!