It's crunch time for Approaching Infinity. Release is about a month away, and my wife and kids are out of town for a few days. So, I'm putting the hammer down and coding around the clock!

Approaching Infinity Crunch Time, Day 1, Part 1:One month until release. The family is away. TIME TO CODE! I really need to finish this game on time. Kickstarter backers are counting on it, not to mention all the other fans out there. So here I go...

Working on finishing quests today, starting with Tentaculons. I've been working on them for several days now, and I intend to finish today.

In one of their quests, you enter an area that is entirely unique, and not found anywhere else in the game. The area has been created, and so has the accompanying device and power that aid you in getting there. I just need to actually tell the game to take you there at the right time...And after several compiles and adjustments, it works!

Now just need to tie up the loose ends of this race's quests. The Tentaculons are scientists, and they are trying to break the Bankers' technological hold on all the other species in the galaxy. If you can help them achieve this, it activates the "technological victory", and you win the game.

Now that you've provided the Tentaculons with a technological edge that the Bankers don't have, they are ready to move openly against them. So, i needed to design a new banker space station that you could walk around inside. This requires a new map icon first. Then add it to the terrain file. Then actually build the map using the level editor. Create a new kind of monster, "Banker security droid" to populate it with. And finally write it all into the quest file.

I also decided to have the Tentacs give you a new device: The Portable Stealth Field. This will help the away team to infiltrate the Banker base without being caught. Added a device type, effect type, and quick addition to the code.

Testing this quest...Wow, there really are a lot of considerations to make. Lots of little changes...but in the end, it works! Here's a shot of you leading your away team into the Banker Science Relay. You need to find just the right spot to plant the listening device, and then get out. 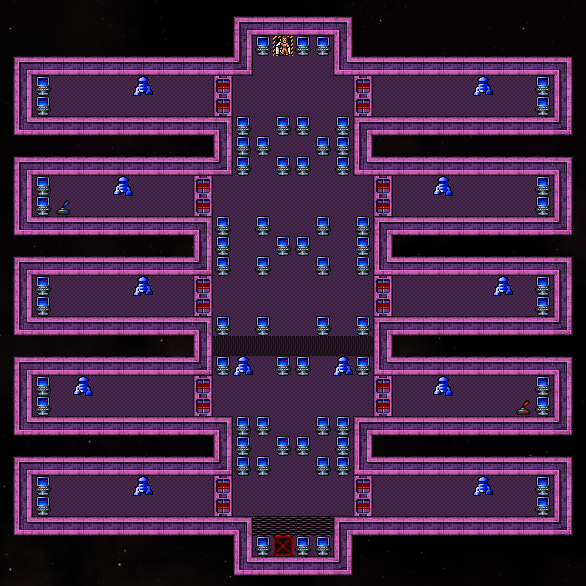