We got Greenlit! How did we do it? Our experience and conclusions in one lengthy blog post.

This week, our delegation is at the Nordic Game Conference in Mälmö, Sweden. While Tuukka, our artist and designer, is off enjoying the Baltic sea breeze, I’ll entertain you with an adventurous tale of highs and lows on our way to Steam. My name is Valeriya and I’m a community manager, a marketing jack-of-all-trades and an occasional playtester for Mushroom Party and Team Jolly Roger.

So, Steam Greenlight, aye? In case you missed it, our biggest news last week was Mushroom Crusher Extreme getting Greenlit after a month and twelve days of hard work and nervous sleep. In this post I’ll talk a bit about our Greenlight campaign, what I observed and learned. Whether you are a fellow game developer, looking for a way to get your game to Steam, or just a game enthusiast, I hope you’ll find something interesting and useful in our story.

From the very beginning, we knew that getting MCE to Steam is essential for finding the game’s audience. And, naturally, Greenlight was a necessary step on the way. Now, to get Greenlit by the community, you need to have a community. Due to all kinds of scheduling mess, we didn’t really start building ours until the very Greenlight launch. Thus, once MCE Greenlight page went live, we had to act fast and efficient. Here I should mention that Mushroom Crusher Extreme wasn’t my first Greenlight experience. I got to work on the Greenlight campaign for Team Jolly Roger’s Interplanetary, back in 2013. 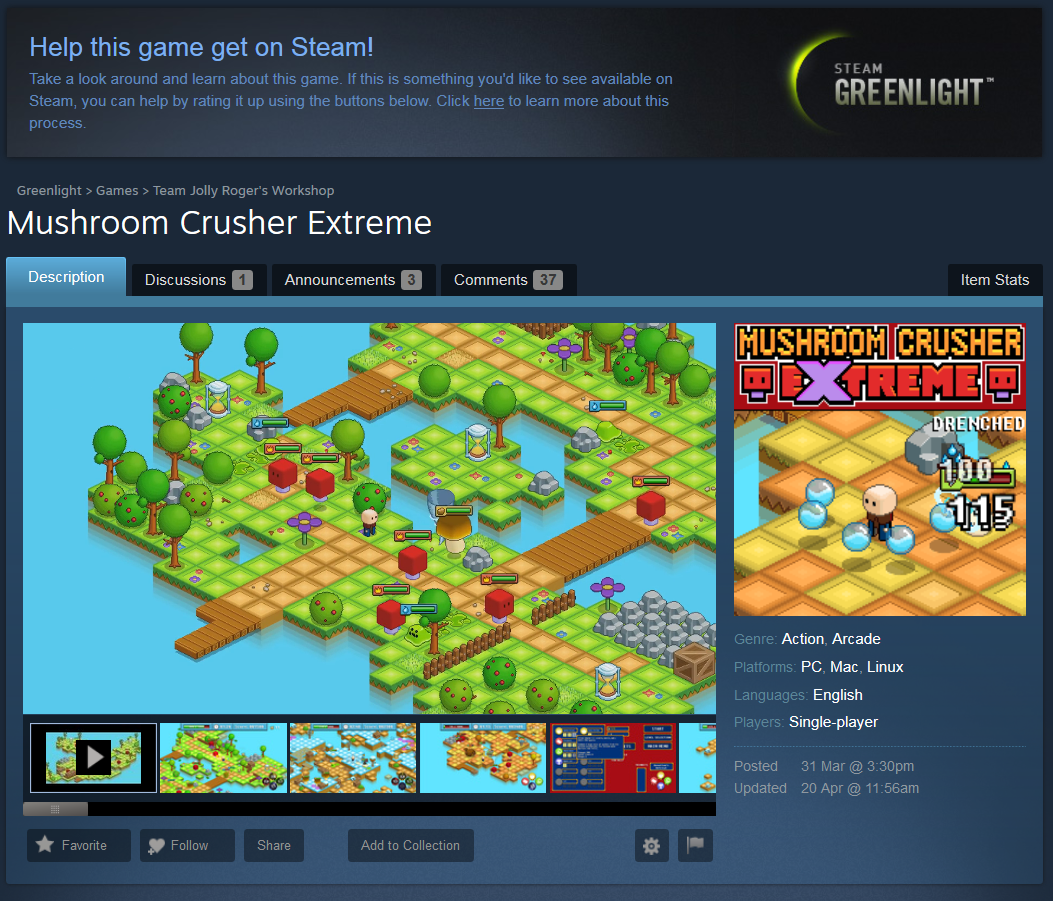 To begin with, MCE was in alpha stage at the time of entering Greenlight. We originally thought about putting out a demo with the game submission, so that all the first-day Greenlight page visitors would have something to play and, hopefully, would get convinced to vote for our mushroom-crushing ordeal. Unfortunately, the demo needed more work than we planned and we decided that it could be released later, and, perhaps, the release would help us revive the traffic to the page with a fresh media push. Thinking about it now, that might have not been the best decision. Perhaps, if we had the demo from the get-go, we would’ve got more visitors to our page and more media attention for both the demo and the Greenlight page. However, we did get Greenlit after all and we got some coverage on the demo, so it didn’t go all wrong. Maybe it went right? Who can tell now.

So, we didn’t have a game to show, but we had to start somewhere. Firstly, we had all the social media necessities set up - you can’t go very far without Facebook and Twitter. Especially Twitter. Not having a public playable build made attracting players very difficult, as you might imagine. Most of the stuff we talked about on social media was the development process. With a previously unknown game, development talk might not be too interesting for players. We needed to connect with someone who could be interested - other game developers and enthusiasts. And Twitter is the perfect platform for engaging with the gamedev community, not only because having a Twitter is considered almost compulsory for any indie dev, but also thanks to all the juicy events like Screenshot Saturday and discoverability opportunities with active hashtags like #gamedev or #indiedev. Here’s a brief list of useful hashtags I made: Goo.gl . Feel free to use and share! 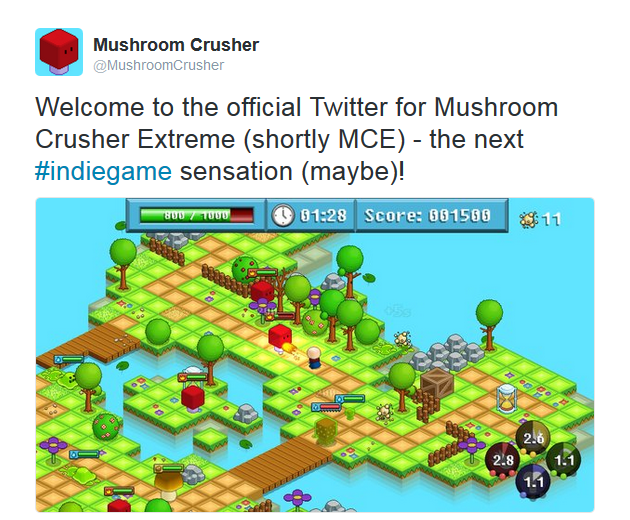 In addition to Twitter and Facebook, we started a devblog. Or, actually, two of them. We share the development insights on our main devblog on Tumblr and on IndieDB. Upon the MCE Greenlight launch, we published a blog post, explaining who we are and what our project is. Since then, every week we’ve been posting articles about the game’s history, key elements and development process, and that’s where you find yourselves now. Also, each article created a nice occasion to post more on Twitter and Facebook!

We didn’t have much of a following on social media at the time, hence, the main source of traffic was whatever Steam could provide us. Which isn’t quite as much as it used to be. The first day on Greenlight brought 621 unique visitors and 249 Yes - votes (that was about half of our final score. We got Greenlit with 491 Yes - votes). Back in 2013, with Interplanetary, our page got 4736 visitors in the first 24 hours. But Greenlight at the time was a great deal less crowded with games and more crowded with people.

Here’s MCE’s page stats about 24 hours after the launch: 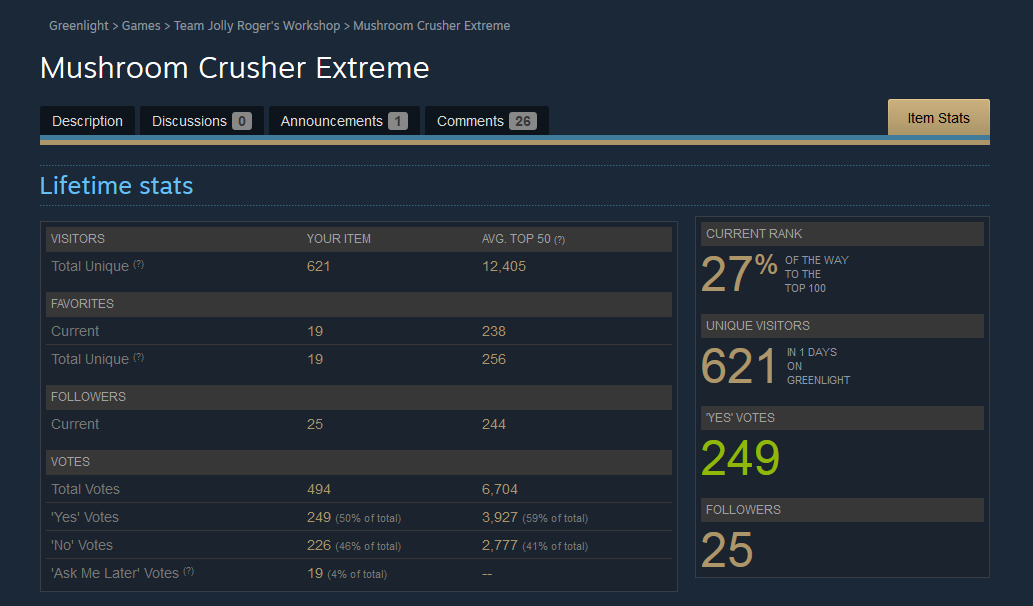 At the same time, we sent out a hefty bunch of emails to game journalists, hoping to get some coverage for our campaign. Though, we didn’t hope for much, having only the game trailer to show. Nevertheless, we did get a couple of mentions in blogs. And the publications always brought a few new votes. Sometimes more and sometimes fewer, but each vote was important to us.

There are plenty of good press lists out there. But make sure you don’t just send emails blindly - make sure that the outlets you’re contacting have some kind of a history writing about games similar to yours. Put some time into it, check the individual writers of each outlet. See if there is someone who frequently writes about games of the same genre as yours, or maybe they have a dedicated indie scene reviewer - write to those people directly. If you already got a publication on some website, reach out and mention they wrote about you before.

Meanwhile, the votes were coming in rarer and rarer. The farther we got from the first page of Greenlight’s Most Recent, the fewer new votes came through. Within the first 12 days we received 420 votes. In the following 17 days we got only 22. 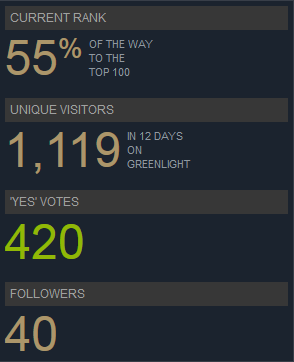 We needed to put out something new in order to get more votes and, luckily, the demo was just getting in shape for going public, so we tried to make the most out of it. First of all, we made sure the demo was making it easy to find our Greenlight page. There was a button in the main menu that sent you straight to Steam. If you missed the button or ignored it (shame on you!), then the first time you quit the game, the Greenlight page would pop up in your browser automatically. To avoid being too intrusive, it only happens once after the first run of the demo and only if you haven't pressed the Greenlight button in the menu. 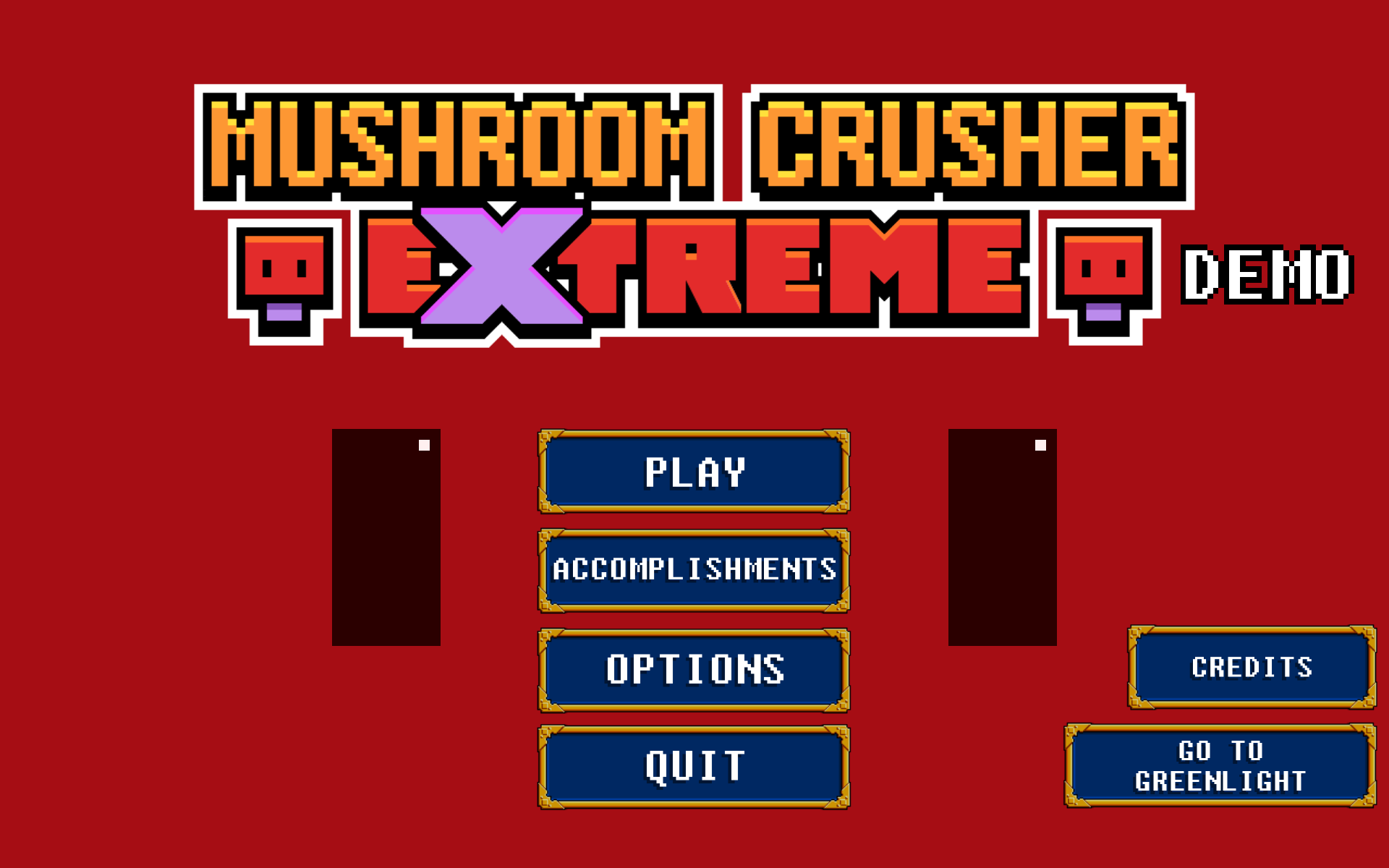 I sent out another round of emails, this time to both journalists and youtubers, since there was something to play. We didn’t really get any Let’s Plays, but some websites I had sent emails to both on the Greenlight entry and on the demo release rounds did post about us. It was very satisfying to see the efforts pay off! Lesson learned: if you don’t get any replies to your pitch emails/press releases, don’t give up! Keep working on the game and reaching out to the journalists, when you have something new to show. They don’t have time to write about every game they get emails about. But if you’re prolific (to a sensible limit, of course) and have something interesting to show, you will get noticed. And if they do find a time to write about the game, I usually send a quick thank-you email back - to be nice and to establish a more personal contact.

It’s not only votes that matter, but also their composition. Our Yes/No votes ratio changed for the better when the demo went public, even though it didn’t happen overnight. The share of Yes - votes increased. Most importantly, a share of those new Yes - votes used to be “Ask Me Later” - votes. Around the times of the demo release we had 31 “Ask Me Later” - votes. Over 2 weeks following the demo release, those votes have been decreasing steadily, until they finally hit zero-mark. Almost all of those votes became “Yes” - votes. “Ask Me later” - votes are not just dead weight. They mean that some people didn’t get enough information about the game to make their decision. We put out more information and people actually did come back to vote.

As for the Yes/No ratio, it’s been about 50/50 throughout our whole Greenlight run. Before the demo there were normally just a tad fewer Yes - votes than No - votes. The difference was always about a couple percent. After the demo, the Yeps overpowered the Nopes, but again, only by a couple of percent. As far as I know, those are quite common proportions. With Interplanetary, at the end we had a 43% - No / 57% - Yes situation.

One last little thing I found very useful - the Greenlight widget. Steam provides you with one (right here) and it’s certainly a good idea to use it, where possible. In blog posts, on your website - anywhere you can embed it! A specifically made button with your game’s name, logo/gif/screen and an encouraging “Vote for this game and help it get on Steam!” is probably more satisfying to click on rather than just a boring ol’ link. I had a bit of trouble getting it to look nice on Tumblr, for some reason, but otherwise it always looks and works well.

That was shortly the story of how we got the people to our Greenlight page and how we encouraged them to vote. There are a lot of details to get into. How do you design your page? How do you contact press? Maybe, sometimes I’ll write about each of the campaign aspects in very grave detail. You can also ask any questions you have and share your own experiences in the comment section or on our Facebook / Twitter (I’ll be the first one to see your messages!). I hope you found my write-up somewhat insightful. Next time, I promise, our devblog we’ll get back to the actual development jibber-jabber. Thank you for reading and thank you for voting and supporting us on Greenlight!