Microsoft XNA is a set of tools with a managed runtime environment provided by Microsoft that facilitates video game development and management. XNA attempts to free game developers from writing "repetitive boilerplate code" and to bring different aspects of game production into a single system.

The name "XNA" originated out of the project's development name, Xbox New Architecture. Instead of being released under the Xbox name, the Xbox 360 was released (2005), and XNA came to stand for "XNA's Not Acronymed".

Fast and universal switching between temples, workshops, cities, factions and merchants is finally possible and revolutionizes the navigation in our game. 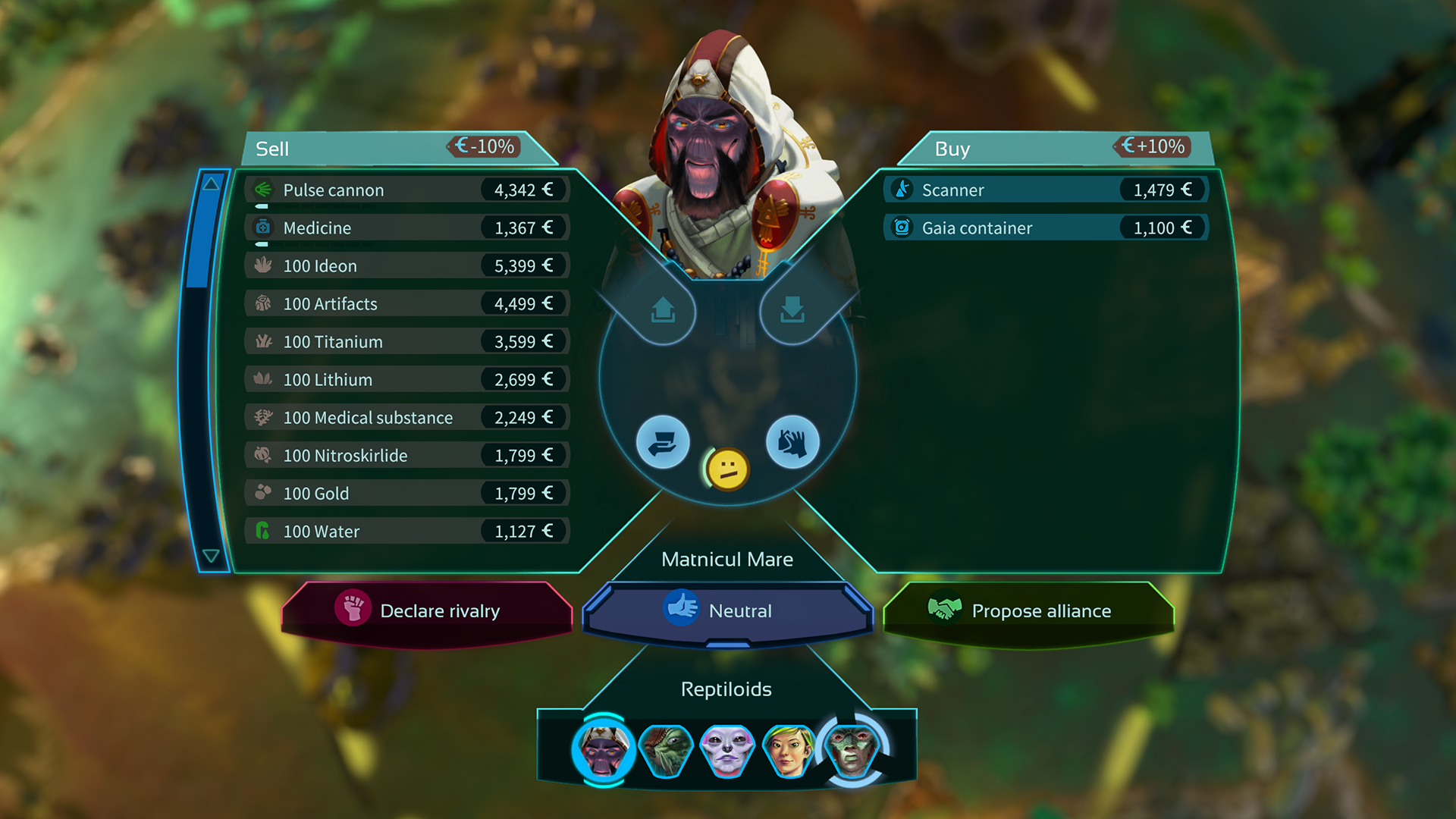 You can now trade and do diplomacy with all sorts of partners through the interface without having to jump to you with the camera. This way, you are not always pulled out of the local action on the planet because of crafting or item acquisition, and you always keep track of what's going on. 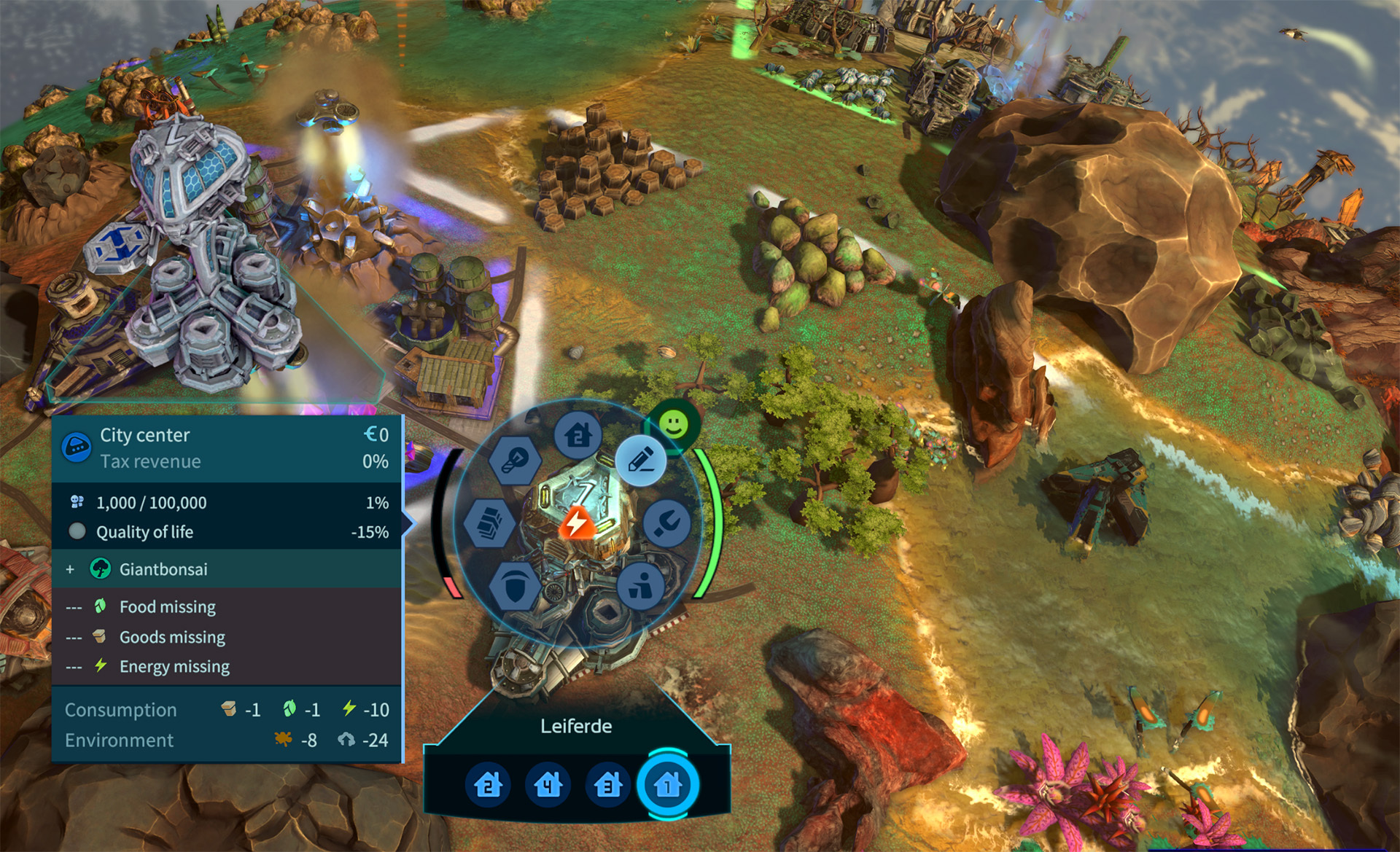 A separate stock panel right at the frasction panel, where you can see all the information about a company's cities and directly buy shares and take over cities. A big button that flashes visibly and visualizes the takeover process. 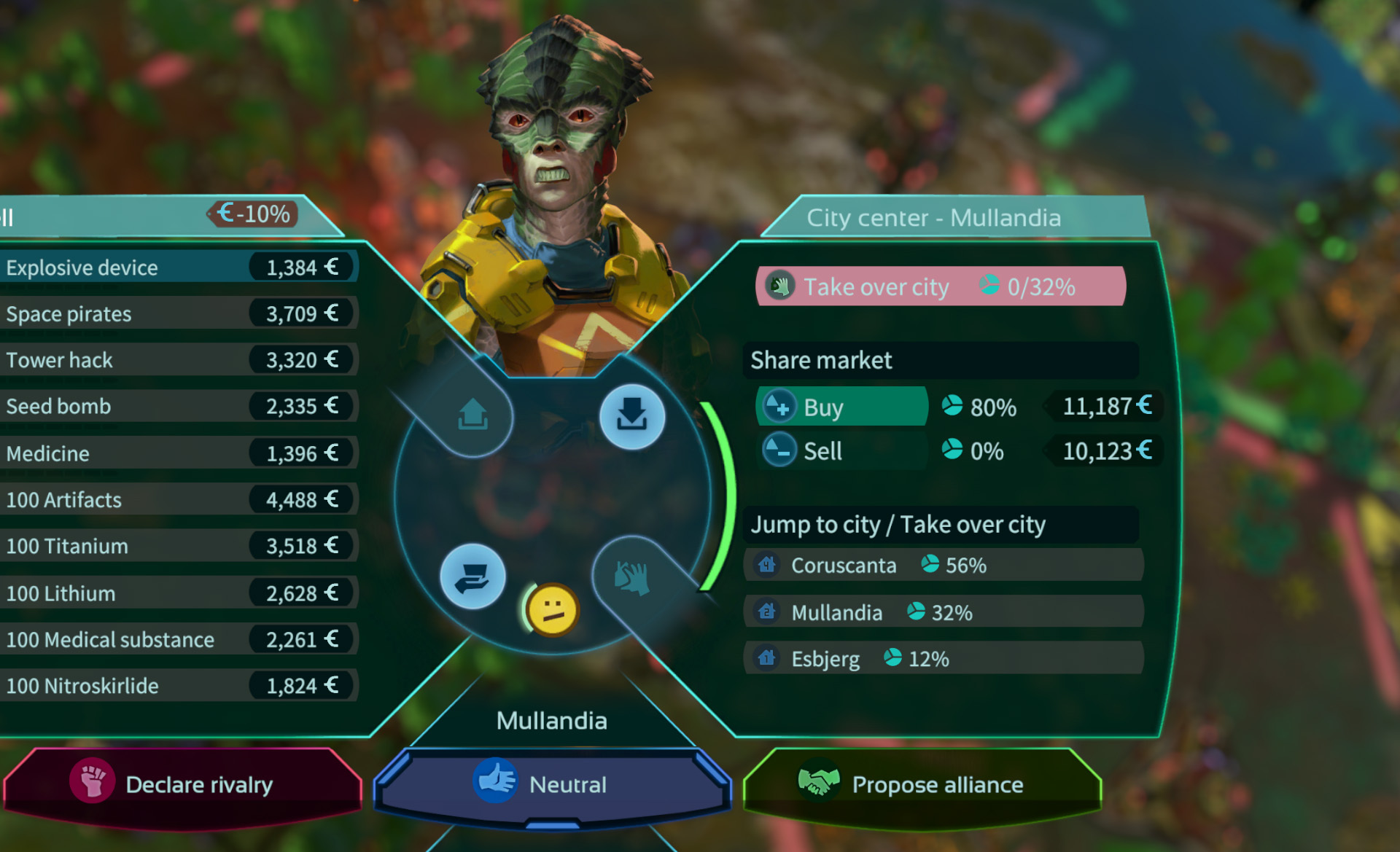 We built a large popup that solemnly announces that you have successfully taken over a city. And also indicates if you have captured equipment in the process, which means you have taken certain items from the enemy. 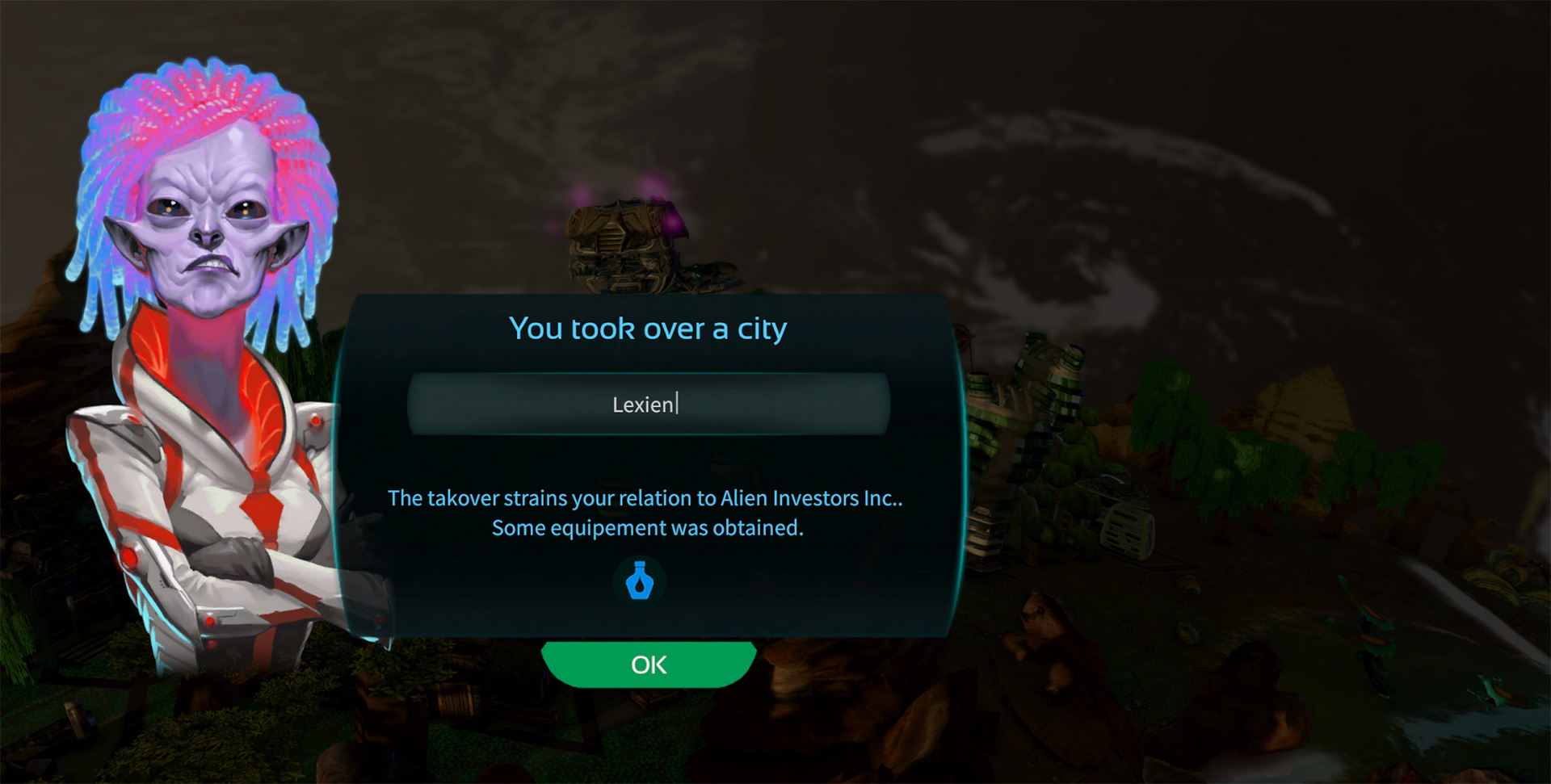 We also restructured the stock trading panel so that the player always automatically starts at himself and can more quickly throw some shares on the market to get new capital.

Also, you can now turn off Gaia Forces and Asteroids in the game for a more realistic gameplay experience that is mainly about global warming and environmental issues rather than futuristic sci-fi elements.

Fossil power plants can now drill and exploit deposits in adjacent fields. This keeps them productive longer and means they need to be moved less often.

In exchange, fossil production buildings have again received a malus. It no longer looks in the game as if there would be no problem at all if a certain resource is not available.

This is especially important in the context of the core message of the game. Fossil buildings that just keep on working, that too is unrealistic.

The taskbar has been made narrower. Options like Research and Technology, which are already positioned in the top left of the interface, are no longer duplicated there.

We didn't spare ourselves and once again tweaked the configuration of the controls. There is a new control pad ring menu with which you can control many things in the game even faster than with a mouse. 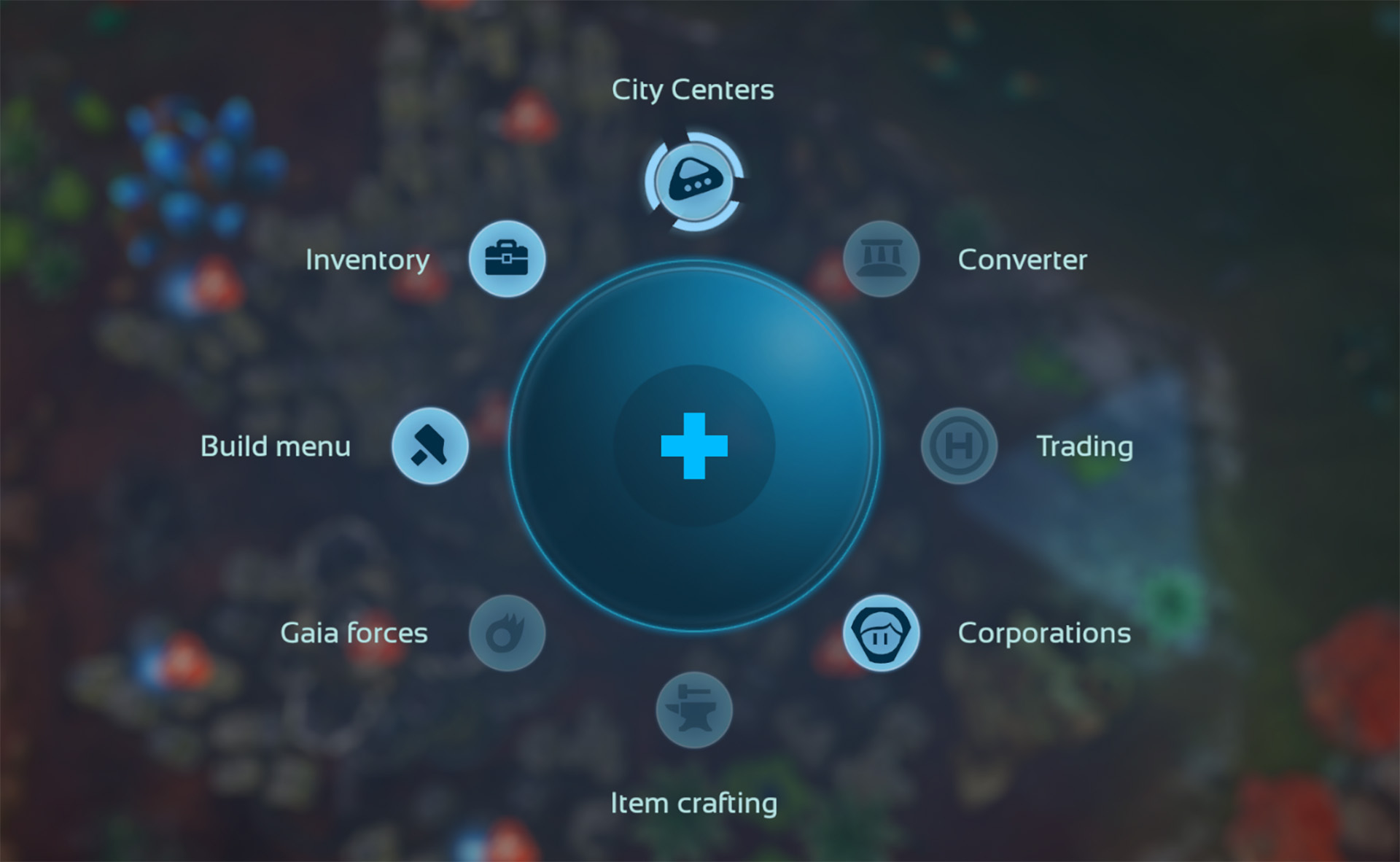 In all ring menus, the D-pad or directional pad can now be used to navigate particularly quickly and directly, select a build option or item.

Jumping to an event or an alarm. Has not worked for a while. Is now, however, on the left stick.

Had literally disappeared from the game. On medium setting, such a vehicle now lands again every 5-10 minutes.

Navigation
We cleaned up the navigation so that too many enemy cities are no longer displayed around the globe at once.

I Am Overburdened, two steps forward, one step back

There's a new mouse control mode in town: teleport! So progress has been made, but I took a really bumpy road to get here.

Greetings, world builders! Recently I had a particularly nice task on the table: To finally give you a complete vision of what we want to accomplish next...

I Am Overburdened, a trail of broken dreams

Not much news on my front, but I'm doing game development (at least some, sort-of) and I'm still alive :) I Am Overburdened - Update 1.2.8.

Greetings, dear world-builders! While we are already working on the next big thing for Imagine Earth we have worked on a lot of usability, balancing and...

Pokémon3D is a recreation of the old Pokémon games Gold/Silver by Nintendo/GameFreak (but, of course this game has nothing to do with them ;) You're...

Planetary Colonization Imagine Earth is a real-time planet simulation and a build up strategy game. Your job as a space colony manager is to explore and...

The first WWII naval game to bring base building and combat on the same map. Build factories, ports and airfields in the Pacific, bring in ships and aircraft...

*** Update 1.2 *** added: Online Leaderboard New puzzle game. Drag the blocks to produce figures. Simple.. and you try Features: - Cubes can be of several...

3D tower defense + strategy. Defend your tech centers from.. people. Features: - You have to place towers on enemy way - You can build Harvester: mining...

You are Sarah, princess of the peaceful realm of Kaleiya. The quiet life of your kingdom was lost the day your father was seduced and then kidnapped by...

Firetry is a fun and enjoyable game. There are more than 50 levels in the game. To play the next level you must first pass the unplayed level. Each level...

I have uploaded some open-source XNA 4.0 projects on my downloads page here: Indiedb.com

I will be uploading more projects there later over time. Happy Coding :-D

Finally! MonoGame is coming to Xbox One. MonoGame implements XNA 4.0 and allows developers to port their games to other platforms besides the default platforms supported already by the XNA 4.0 Framework. Link: Twitter.com

Also, I need to correct myself on an older post. Unity has Mono built into it, not MonoGame. So if you are eager to finish your XNA game, with some work, it is possible to import your XNA or MonoGame project into Unity. Mono is a cross-platform open source implementation of Microsoft's .NET Framework. It is based on the ECMA standards for C# and the Common Language Runtime.

With MonoGame 3.4 (which is the continuation of XNA 4.0) for Visual Studio 2015, it is now possible to create a game for Universal Windows Platform (UWP). This also makes it possible to get your XNA project to run on Windows 10 with UWP. Since the Xbox One dev kit supports UWP, it might also be possible to get a MonoGame project running on it.

If anyone is curious, it is possible to integrate your XNA Game Project into Unity, but it might take a little extra work. This is a proof of concept showing the Platformer XNA starter kit running inside Unity3D. Zero code changes have been made to the original game code. Using a mixture of new code and some code from MonoGame, the author has implemented XNA emulation. They did so by having a game object with a script attached run an XNA game performing updates and drawing.

Check out this link below for the source code:
Github.com

Interesting but what about the performance? I persume it would drop radically under such conditions.

My apologies for replying back so late. Under such conditions, it is possible for the frame-rate to drop. By performance, are you referring to graphics specifically? I sometimes rarely hear people speak of physics performance or audio performance. Honestly it depends how the XNA game was coded prior to being imported into Unity. It would be best to fix garbage collection issues in your XNA game project before importing it into Unity. There are many ways to help increase performance in your XNA project prior to importing it into Unity. Its a question of whether or not you are CPU or GPU bound. Using the CLR Profiler can help you find out. Things like changing foreach loops to for, multi-threading, using StringBuilder instead of String, and using DrawUserPrimitives are just some ways to help the frame-rate. In my game constructor, I set the following to false: IsFixedTimeStep = false; and graphics.Synchr

No problem. Yes, I was referring to the graphics performance.
You mentioned DrawUserPrimitives(). So far I have only used it in 3D with Vector3. Do you use DrawUserPrimitives in 2D as well? If so are you still using a Vector3 and just projecting 3D data on an orthographic view? Do you know if vector2 can be used with vertecies and triangles?
Thanks.

For drawing primitives in 2D, you really just need to know what to tell the system to make it work. Check out this great tutorial for more information. I hope it will further answer your questions as it has helped me.

I checked the link you posted, after seeing it I remembered that I checked the same blog long ago (might be a couple of years ago). Turns out the author is talking about what I was refering in my comment. Projecting Vector3 vertecies on an orthographic view. It was good to read it again. Thanks a lot for the reply and the link.
Cheers!

Mod SDK & Community
Built a game for XNA and want to support mods? Try mod.io, a cross-platform mod SDK created by Indie DB which makes it easy to get a mod community up and running in-game. Currently seeking games to integrate and promote

It's not an engine, its a framework basically a template to directX. I really like it because it allows you to develop for 3 Microsoft platforms and can port them easily.