node-webkit is an app runtime based on Chromium and node.js. You can write native apps in HTML and Javascript with node-webkit. It also lets you to call Node.js modules directly from DOM and enables a new way of writing native applications with all Web technologies. It's created and developed in Intel Open Source Technology Center. Roger Wang is the maintainer of node-webkit on GitHub, the game Mass Control Tycoon by MCT Team is the first game which uses the engine on IndieDB officially.

Welcome to my first ever Blog, not only as an Indie Game Developer but overall, first blog ever. It all started during the Pandemic of 2020. I had just graduated from a Full Stack Coding Bootcamp and needed to find a way to continue sharping my Javascript skills, or lose them. My current employment does not require much of Javascript and it was not a great time to leave that type of work to start fresh as a brand new Junior Dev, so there had to be a way...

Rewind to as far as I can remember, playing The Original Sims when it first came out. I always gravitated more towards creating content vs playing. I had a nice little website dedicated to some new skins and even 3D objects I self taught myself to make for the Sims. That did not go far, but it was the birth of creating content online for me.

Fast forward a few years, during my addiction with Age of Empires 2 and that is where I started creating Custom maps for the game. All my playing was play testing the maps and building a community along with it. Back then, I had started up a Multiplayer community of map makers and it went as far as it was going to go.

From that, I ended up somehow managing a website of a Gaming Network for the newly released Empire Earth. By that point, life changed, I found a fulltime job in Data Entry and no longer had time to keep up with the gaming or website admin side of things.

Years later, I found myself downloading Age of Empires 2 HD on Steam and found an amazing map based on Game of Thrones, which was in its peak at the time. I played it a ton and thought of things I could add to improve upon it. Since the map was no longer being updated, I reached out to the original creator and asked if I could start adding to it unofficially. That was a couple of wasted years of map making but eventually it got pretty big at least in terms of the small community in Age of Empires 2 HD and even blew up with a youtube video created about it by the infamous Spirit of the Law:
Youtube.com

From there, I went on to make another map famous but this time in my favorite genre, the RPG. Lord of the Rings the Fellowship RPG:
Youtube.com

Anyways, I digress. The point of the intro above was that I have always wanted to somehow design/build games, yet never found a way into that profession as I navigated through the chores of work, live, work. Not that I had much time during the beginning of the pandemic either, starting a new job. However, somehow I got caught up in the world of Discord, something I knew nothing about as a Boomer, and ended up building a Custom Bot for a Game of Thrones Server. This essentially became my hobby to destress about the pandemic, the new job, the changes in remote work etc...

What started out as a ton of googling and watching of youtube videos to create a bot, from one giant file full of code, has now grown into a more efficient file system, hosted on Heroku, with a Mongdb cloud account with close to 200 members and on a good day, about 70 active.

The Theme of the Server is Game of Thrones, and the idea is to work your way up to become the King, or any other power role such as Hand, Priestess, Lord Commander, Lord of a Great House and many more. It provides a way to play against the AI (Bot Embeds with reaction collectors), to also be able to play member vs member in a real time RPG. This is one of the very few Discord RPG's you can find out there, guided by a Custom bot. In my next blog, I will get into the details of the server and how it is setup. If you would like to see first hand what a Discord RPG looks like, visit it here:
Server Link: Discord.gg

My hope is to continue building up coding skills by working on something I am passionate about, and eventually end up on the Unity platform to build an actual graphical game.

In Game Screenshots of the Discord RPG:

Full text/image/choice based Quests to gain powerful roles that come with their own actions. 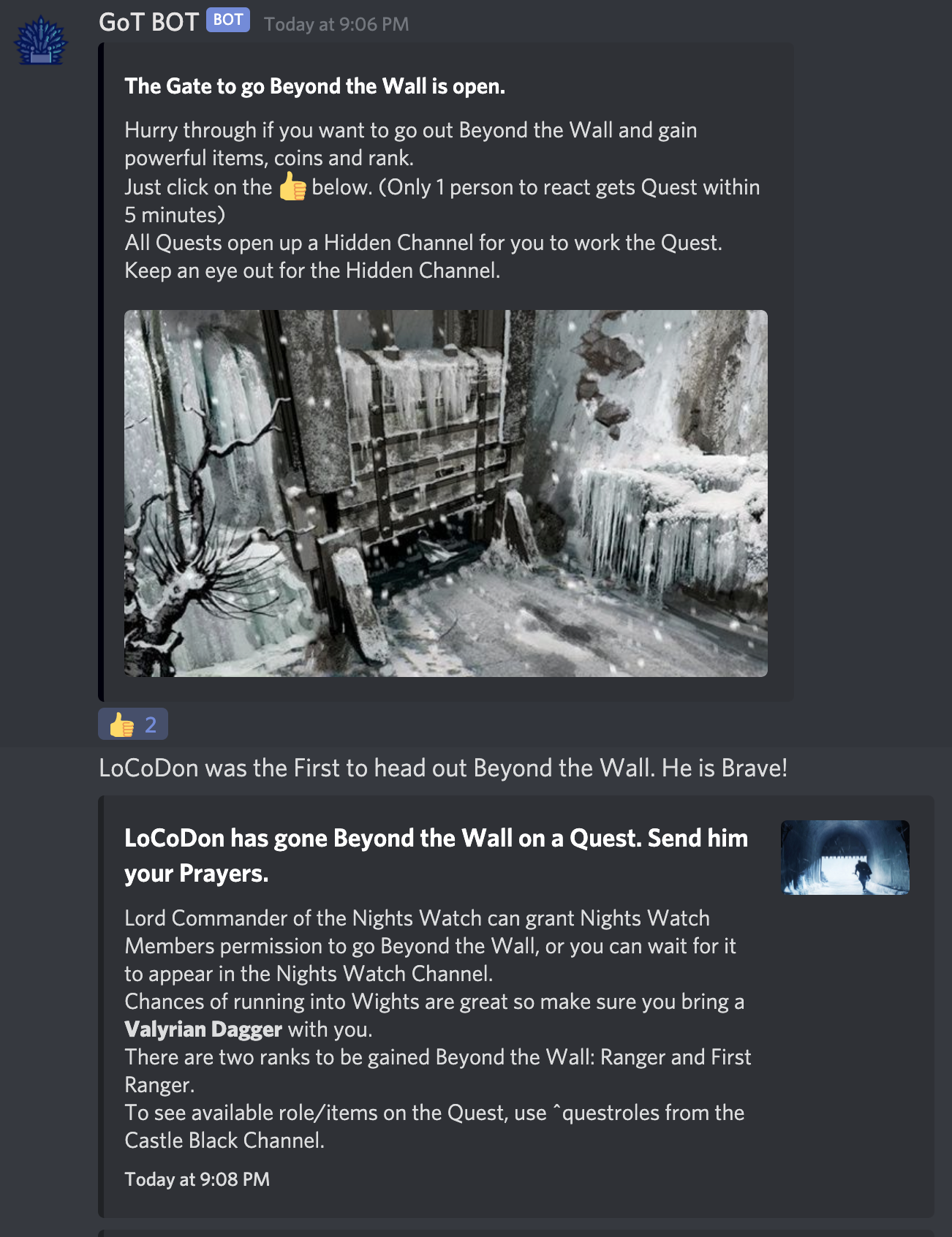 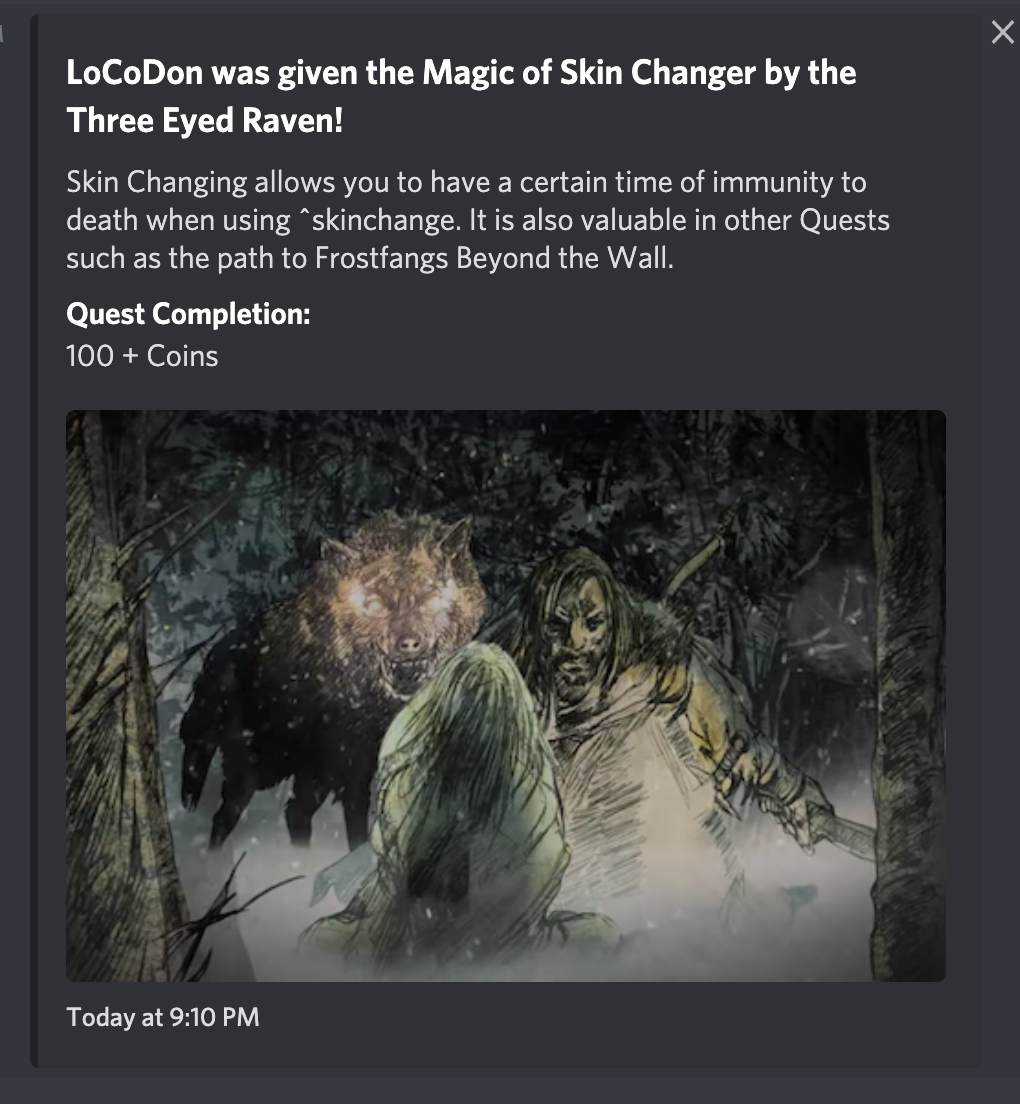 Member vs Member Actions - Execution (Member ends up in a dead channel where they can no longer participate until revived. 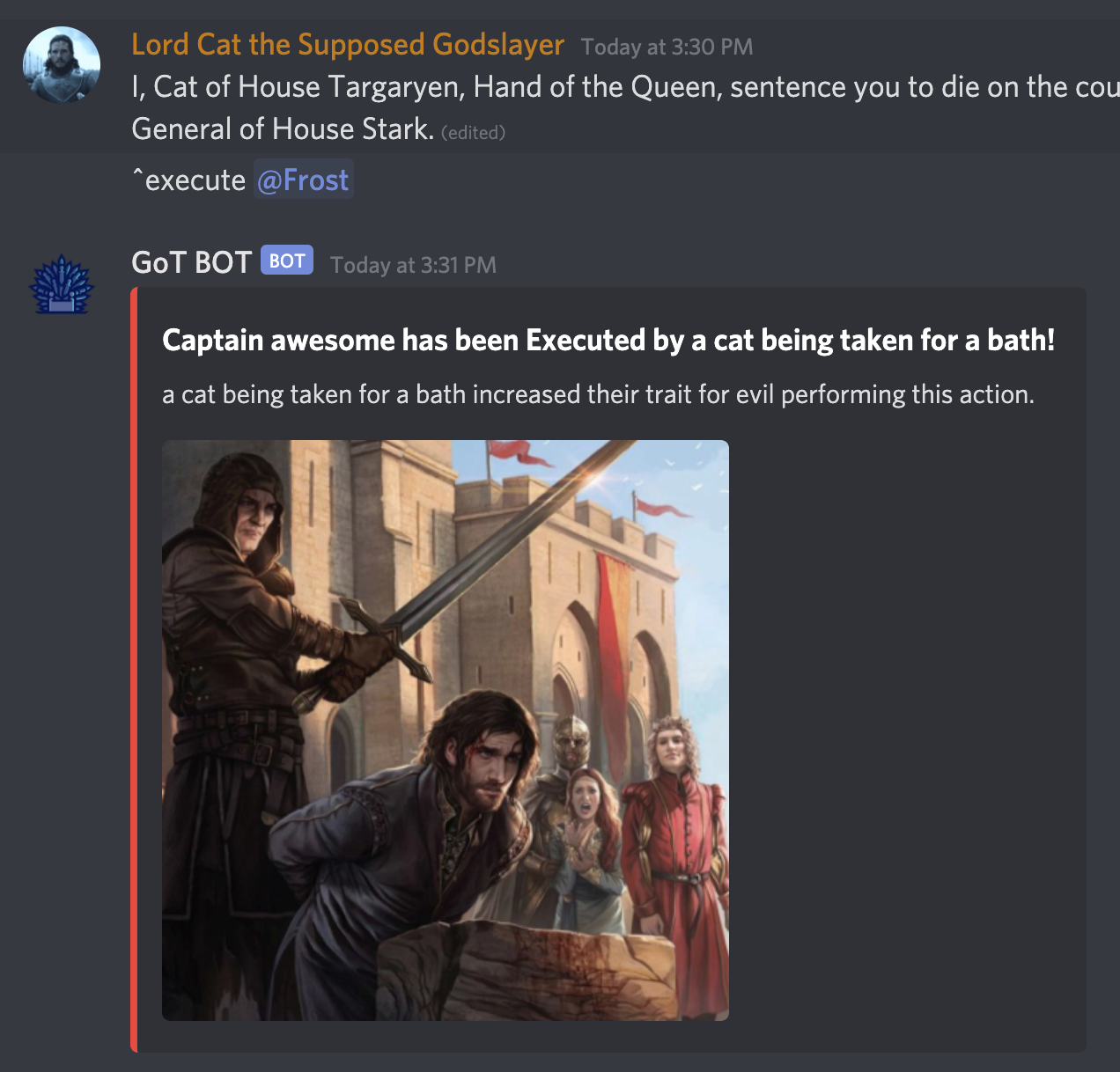 You should update to get the best performance and newest features ...

A node-webkit benchmark for the comparison between HTTP and TCP PVP data transfers.

If you want to develop a framework in node-webkit you should use prototyping!!!

The software spine in combination with pixi.js makes it possible to create/use complex animations in node-webkit. yokumo has developed a better support...

node-webkit contains two engines, V8 for JavaScript and WebKit for HTML, so you can make dynamic HTML5 game applications.

Can this really be classified as a game engine?

Mod SDK & Community
Built a game for node-webkit and want to support mods? Try mod.io, a cross-platform mod SDK created by Indie DB which makes it easy to get a mod community up and running in-game. Currently seeking games to integrate and promote