Pixel & Vertex Shader Support NVIDIA and ATI's powerful new graphics cards have inspired us to support both Pixel and Vertex shaders. You have full and direct control of these awesome hardware effects from within DarkBASIC Professional. Pixel Shaders are used to alter lighting and surface effects that replace artificial, computerized looks with materials and surfaces that mimic reality.

Vertex Shaders are used to breathe life and personality into characters and environments. For example, through vertex shading you can create true-to-life dimples or wrinkles that appear when a character smiles or you can ripple shockwaves through a land matrix. The illustration above shows 6 different DarkBASIC Professional shaders in action.


Features All games created with DarkBASIC Professional are License and Royalty free.
All games can be distributed as a stand alone executable.

After release the XBOX ONE and Windows 10 version the last year on Microsoft Store. I've been working on the game to improve with the feedback of the community and I've been preparing the game to be published on Steam this year 2019. 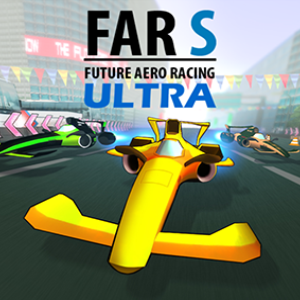 During the last four mounth, I've improved the gameplay and balanced the A.I. for each track. All the UI/UX has been prepared for multiples resolutions, because on this new version you can select the game resolution, window mode (fullscreen of windowed) and choose the game FPS (30fps or 60fps).

All these new options are now in the options menu. 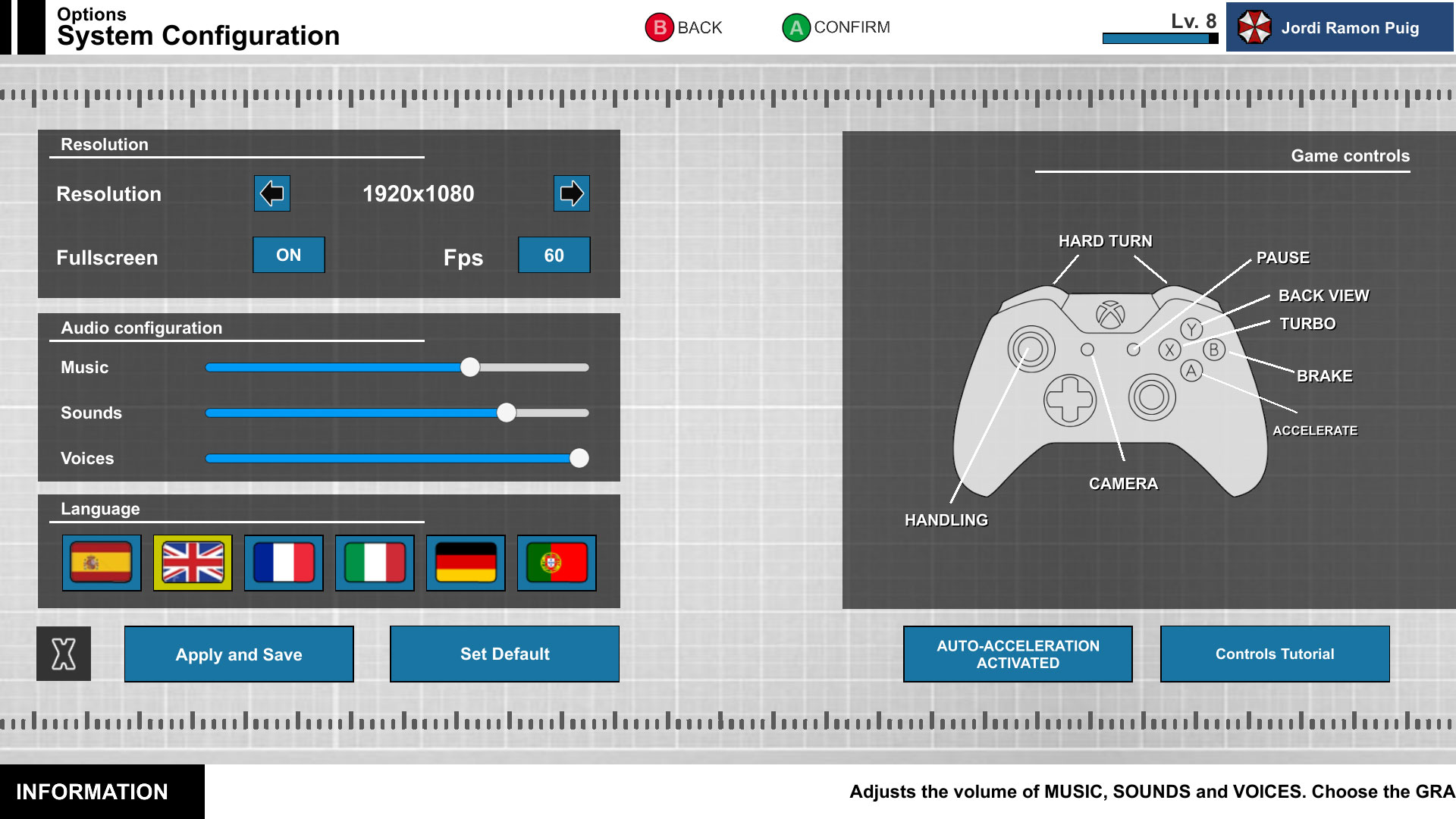 An other big change is on the post-processing effects. Now it's better in some important aspect, the sahder have better performance and definition and I added a post-processing filter (vignetting and color filter) to make the final image more beautiful. 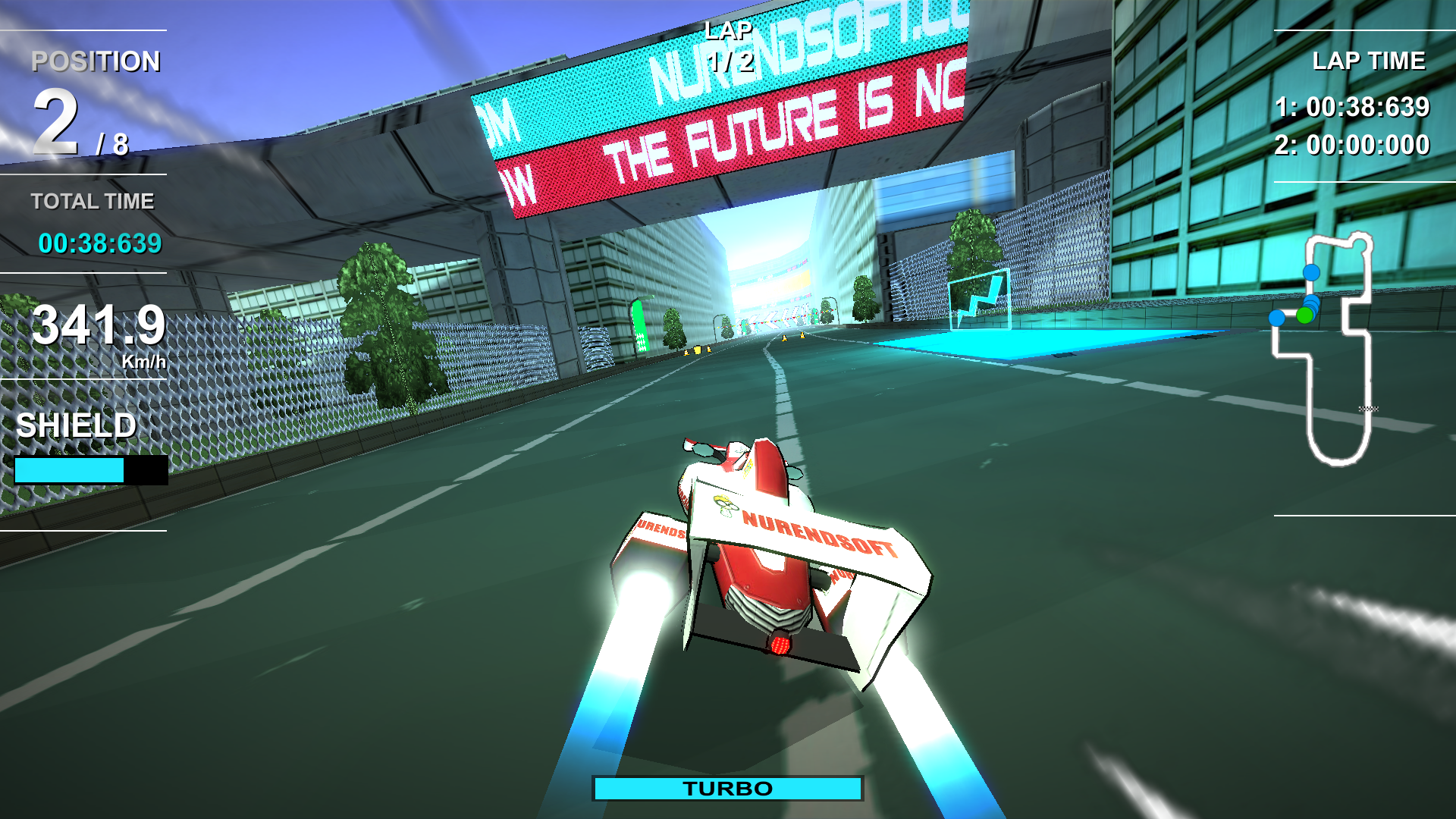 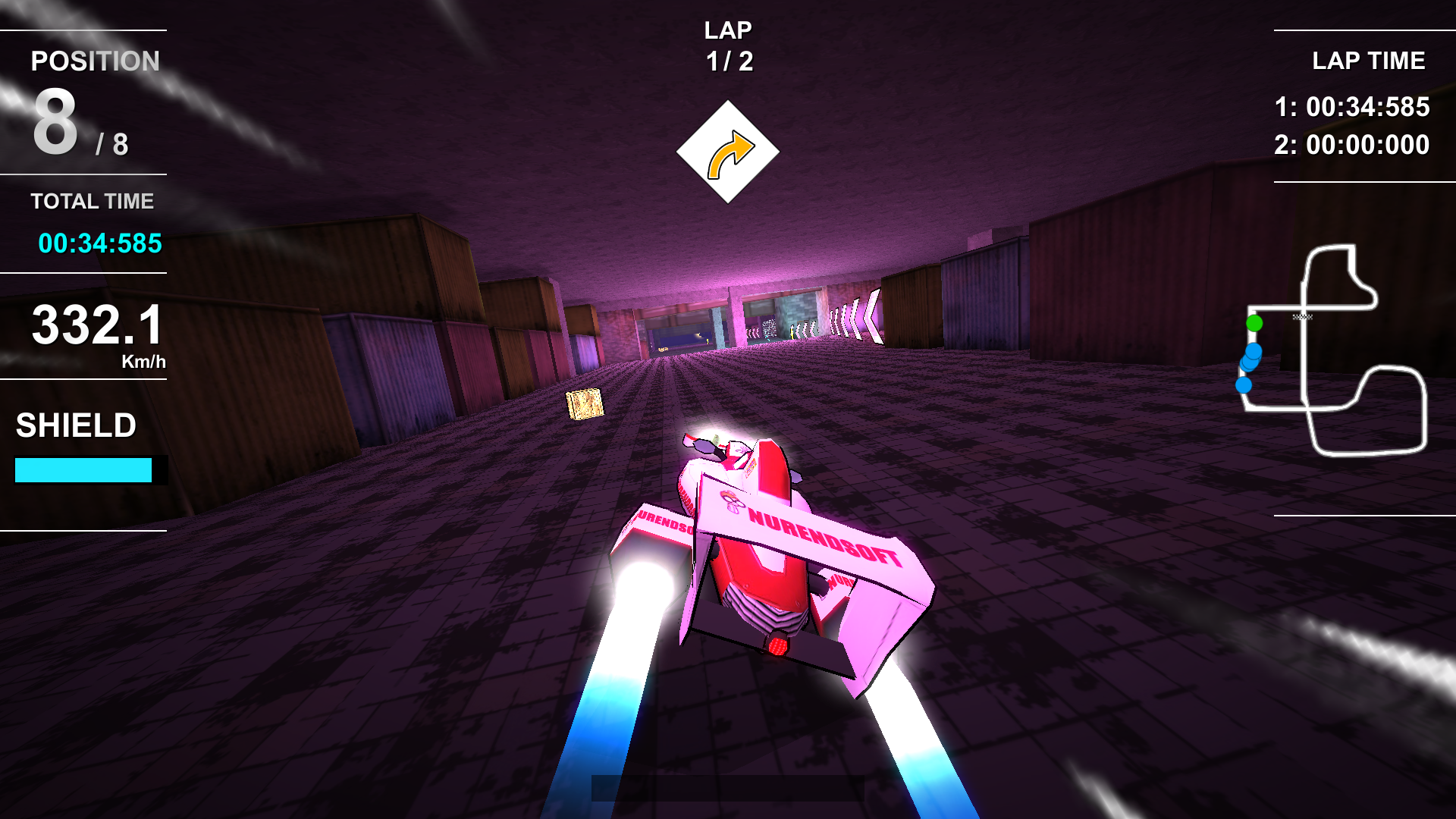 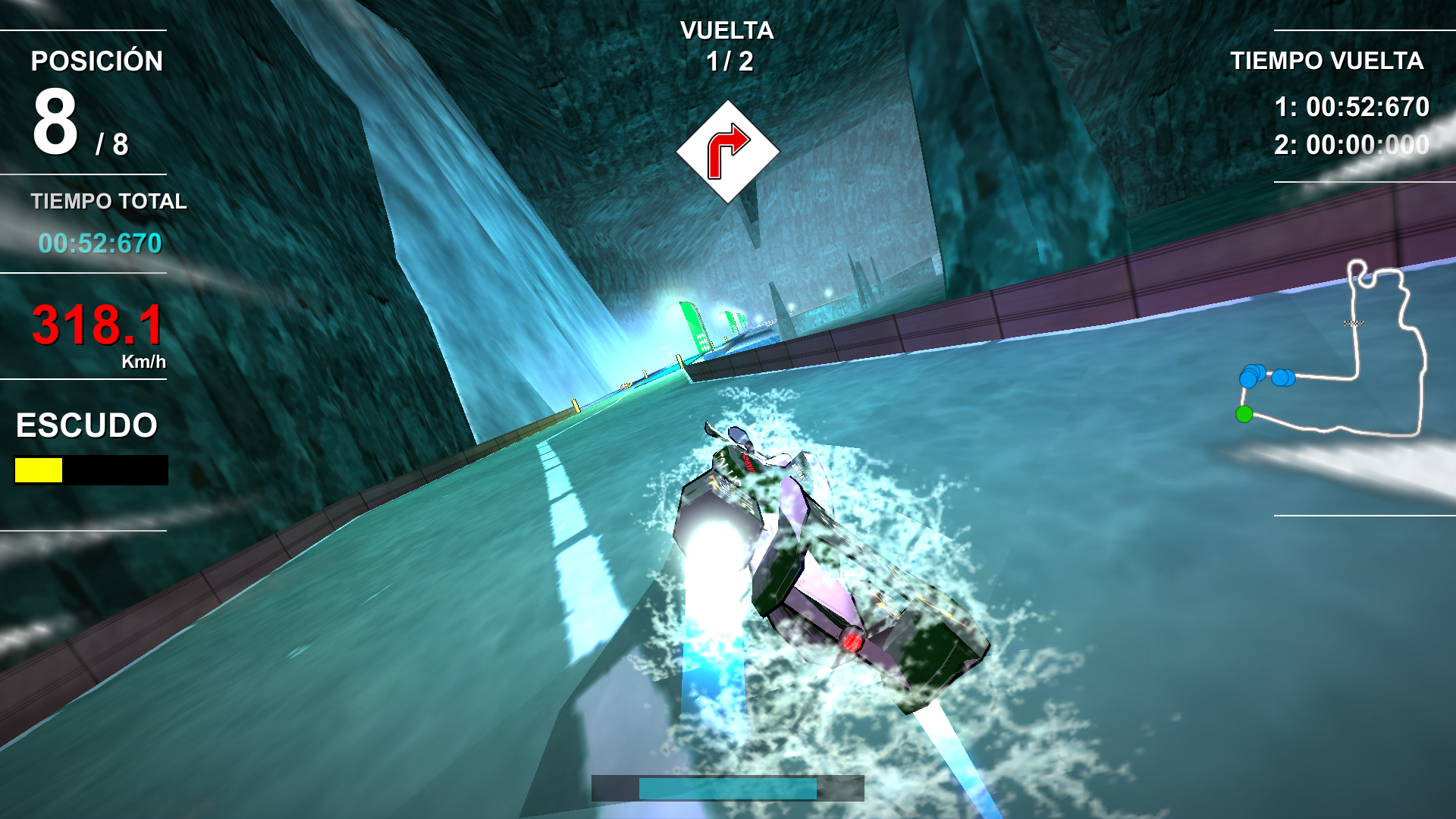 This improved version of Future Aero RAcing S Ultra for Steam have some cool and exclusive features. Each track have is own online leaderboard for the best time, you can show who is the best driver to all your friends on Steam. Also, the game includes 12 Steam achievements and the Cloud Save feature that allow you to play the game where you want without lose your progress. 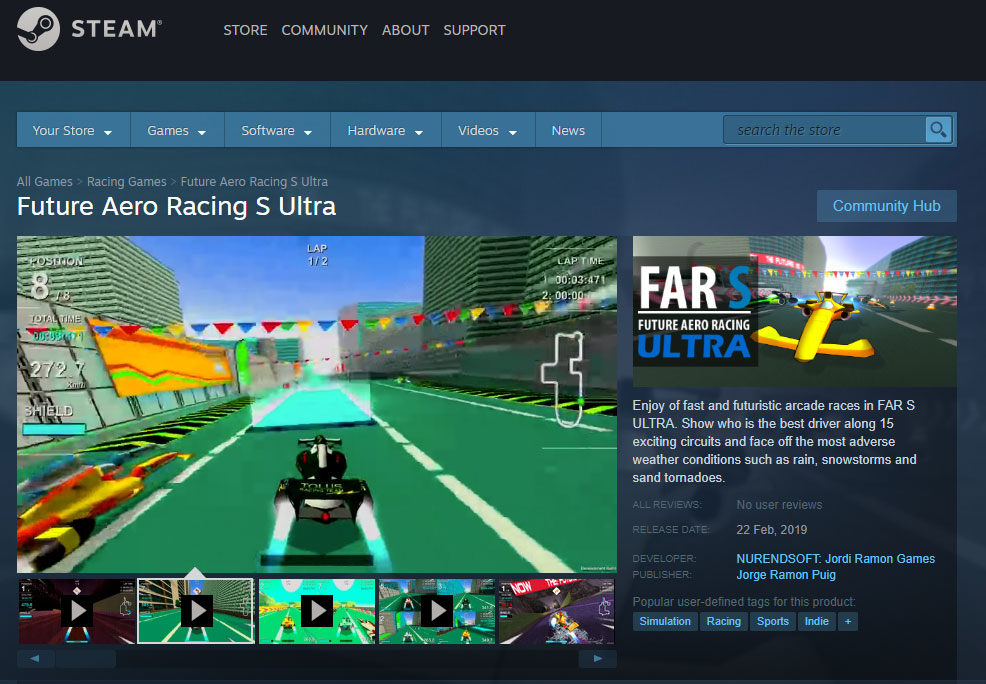 Add now Future Aero Racing S Ultra on your wish list of Steam and be aware of the release date!

Thanks to everyone for your support!

Here is Weekly Update #3. To bring you up to date of the development there is one major update per week.

What is better than a free demo on Steam? A free full game, of course! Join to win one of 100 Steam keys!

Father's Island gets lot of praise in reviews and articles - much more than we expected. "Try before you buy" and get our demo from Steam!

We are proud to announce our new game. ZombLabs! ZombLabs is an action packed Horror-Survival FPS. Fight your way through an epic battle against endless...

A friend and I are developing a 2D-style Beat 'em Up called "Beat 'em Up". We've worked on the game since about October, and we've gotten fairly far (if...

In a distant future, where humanity is extinct and forgotten, ten thousand worlds had been taken over by the SENTINELS, intelligent machines with energy...

Feel the speed as you've never done before with this amazing arcade racing. Be the best pilot and drive at máximum speed for get the glory in the 4 F.A.R...

Welcome to the career officer, and was promoted to Admiral! This is an unusual, dynamic Tower Defense, a lot of levels. The towers have a different shooting...

Welcome to ZombLabs! ZombLabs is an action packed Horror-Survival FPS. Fight your way through an epic battle against endless waves of zombies. Get ready...

Physigons is a physics sandbox game. You are in a simple world in which you build whatever you like. With 15 primitives, custom objects, RGB color with...

3 Coins at School is a simple and funny game that can be played in both single and multiplayer mode.

GalleonMate is a cool multiplayer game where you and your mate will fight against other galleons! 16 Galleons for a total of 32 players that will be part...

GlaZ is a psychedelic arcade game where player controls a spherical "body", looking for keys, opening doors and solving puzzles while trying to understand...

If a 3D Mahjong is the best they can showcase for professional project, then that's pretty sad. I remember when DB first came out, it tantalized me as a kid because it offered a way to make games within one neat package. It has "professional" in it's name so it must be good right? I don't doubt you could make a great game with it but after trying it off and on for years I would have to say skip this language. FPS creator was one such abomination created by this same group. It was a great idea but the end result was quite poor. Try DB and any games made with it and see for yourself.

I think the help files are pretty useful -.-
Not bad but needs to be cleaned up, some commands don't really work.

Had potential , but it's less popular than the other big engines which now sadly even become free or very cheap but are more supported with tutorials , help and such .

but DBP is free now

Mod SDK & Community
Built a game for DarkBASIC Professional and want to support mods? Try mod.io, a cross-platform mod SDK created by Indie DB which makes it easy to get a mod community up and running in-game. Currently seeking games to integrate and promote