Cause It’s been 3 months since the last update and many of You requested another one, it’s here

Before we will start We would like to invite You to our DISCORD server where You will have more direct contact With us and You could also chat with otter supporters and players. :)

The End Of The Sun DISCORD CHANNEL 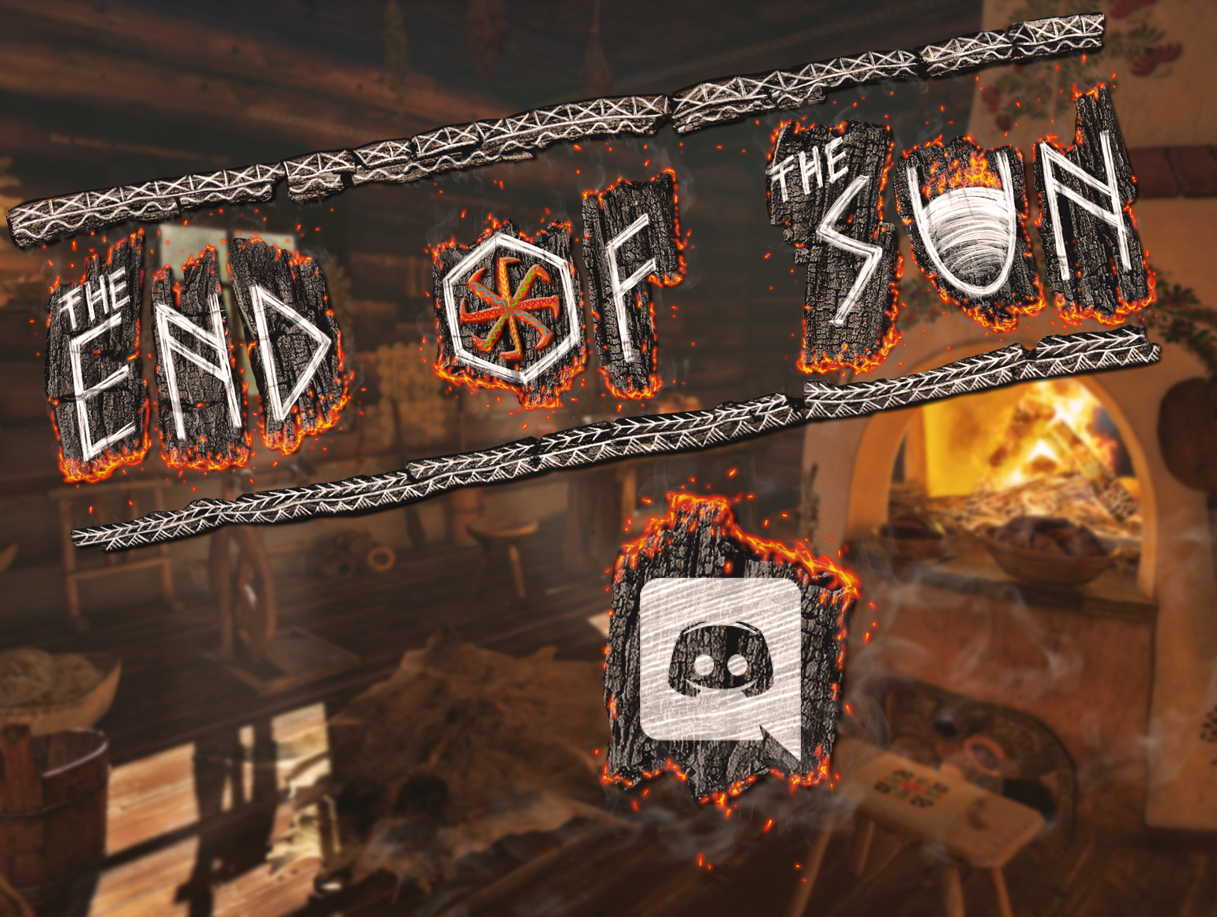 We are really close to 7000 wishlists! It Is Really Important for better steam positioning for a small indie team like ours to have as much as possible wishlists before Release.

INFO: Keep in mind that there is a lot of GIfs on that post, We optimized gif for faster loading, This is why gif don’t represent full colours or quality of the game.

What was the progress of game development since the last update?

First of all, we would like to note here that even if some of the following elements may seem very basic, their implementation, testing and connection with other gameplay systems is very laborious. Only 2 people in our team work full time on developing The End of The Sun, so our efforts are limited. (Our programmer [Third person in the team] is working a part-time job)

We assure you that we are currently working at least 10 hours a day producing the game to refine it as much as possible. :)

In this update, we will try to describe and show as many completed elements of the game production as possible without revealing too much of storyline, which is really hard when talking about adventure game. Additionally very soon you can expect another update presenting one of the fantasy characters you will encounter in The End of The Sun. :)

Why we put elements that are not exactly related to fun and gameplay into the “Done” list?

Some elements that we described below (on which we have just finished work) will make the further development of the game faster. It’s hard to describe some of these changes as something that makes the gameplay more fun. For example, preparing a better time travel management system in the game, or a significant improvement of the Cutscene system will shorten further production time and increase the quality of the final game. (We can’t say that it will add next cool mechanics into the game) We added it to the list to show that game development is not always working on next great feature… very often we need to make long hard work that will have a small impact on gameplay. Sometimes these are systems that every game have nowadays so it just needs to be done. – the game save system is a good example of it. Developers spend sometimes long moths to implement it and for players, it should be basically invisible :)

Probably You never saw a review like: “that game has great save system!”

Let’s get to the point. What we have achieved since the last 3 months? 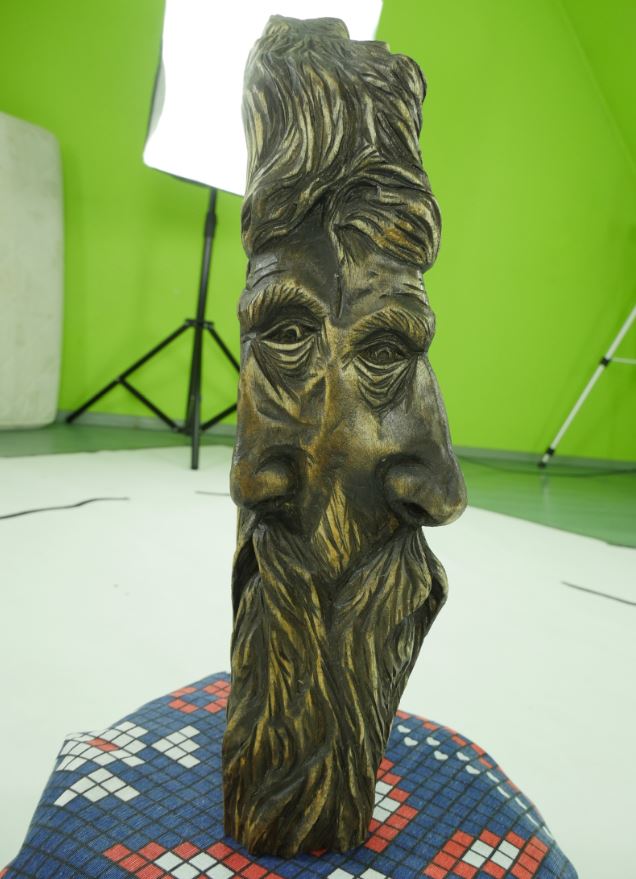 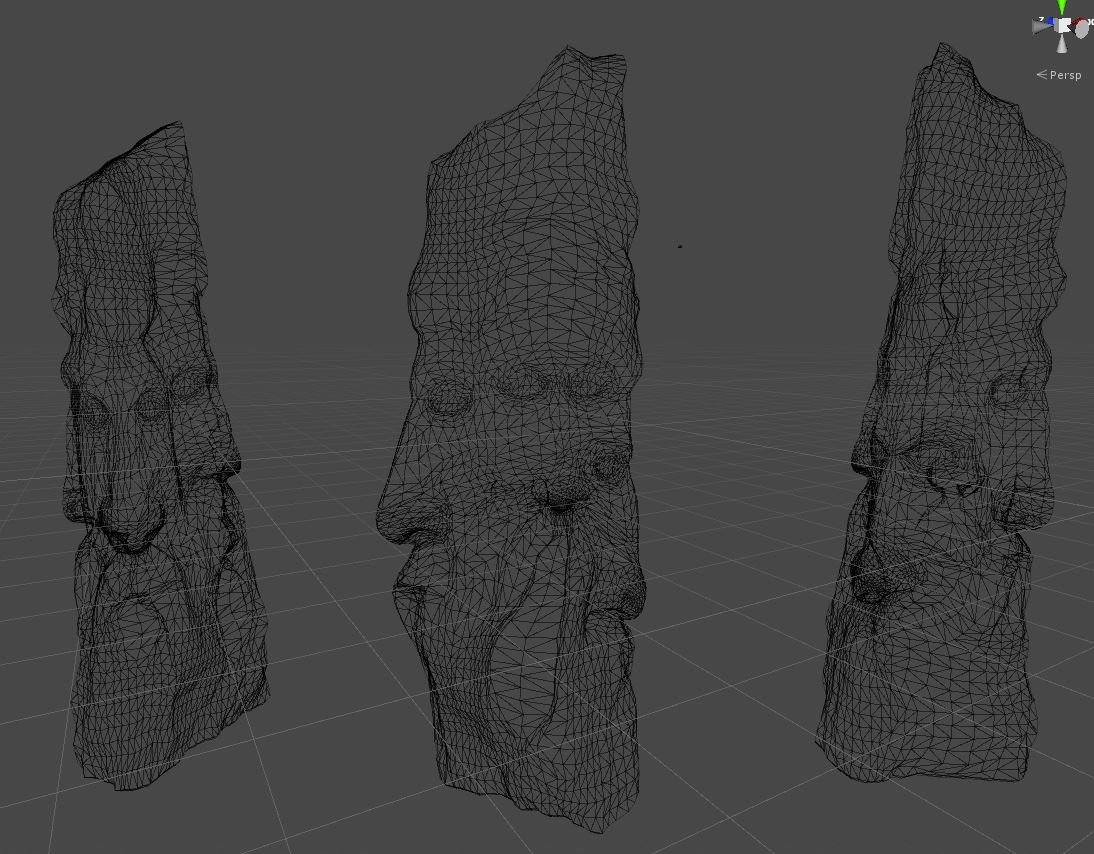 Svetovid wireframe of the 3d model. 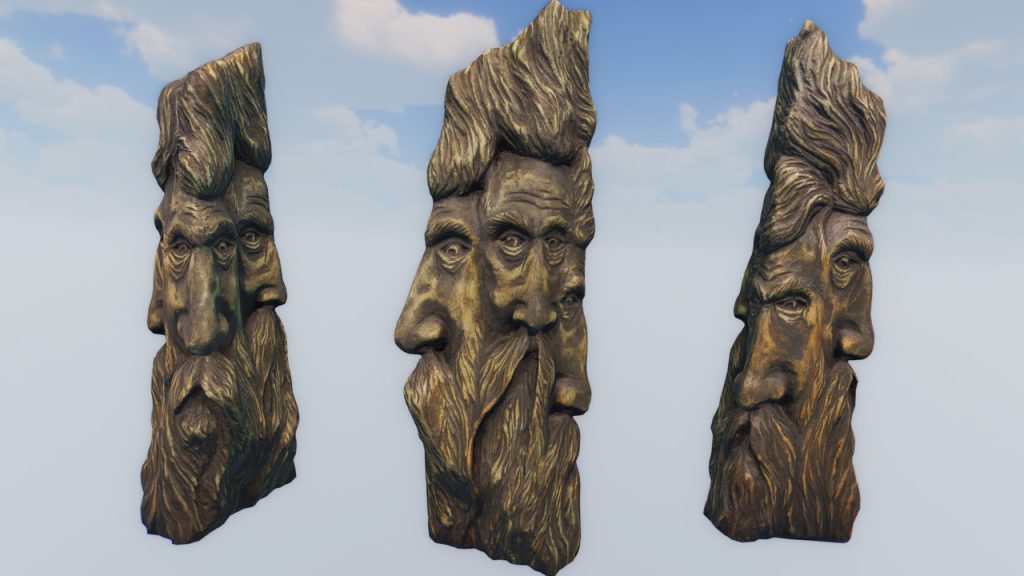 “Swiatowid” ( Svetovid ) Sculpture (3d model inside the game engine) – the sculpture made by Bartosz Machura and scanned into our game as 3d model. Svetovid is the Slavic god know from mythology. He was shown with 3 or 4 faces (one for each direction of the world / 4 seasons of the year/ or sometimes connected with 3 main bodies of human – physical Body, Soul and Spirit ) We will for sure make some update about it too :) 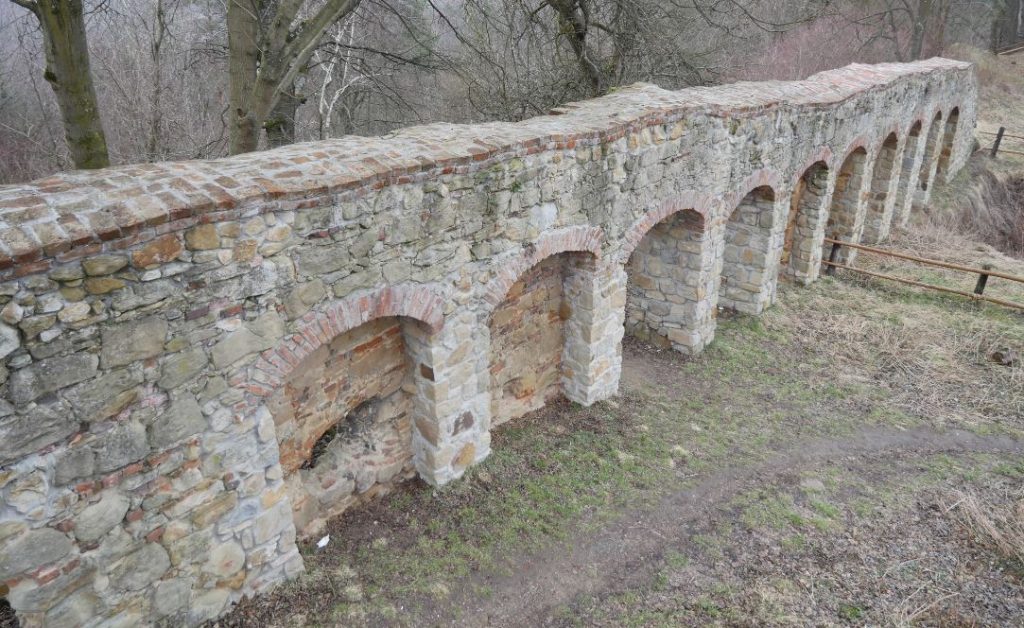 One of many old arcades ruins photos that we used to make 3d model. The Final Result You could see below. 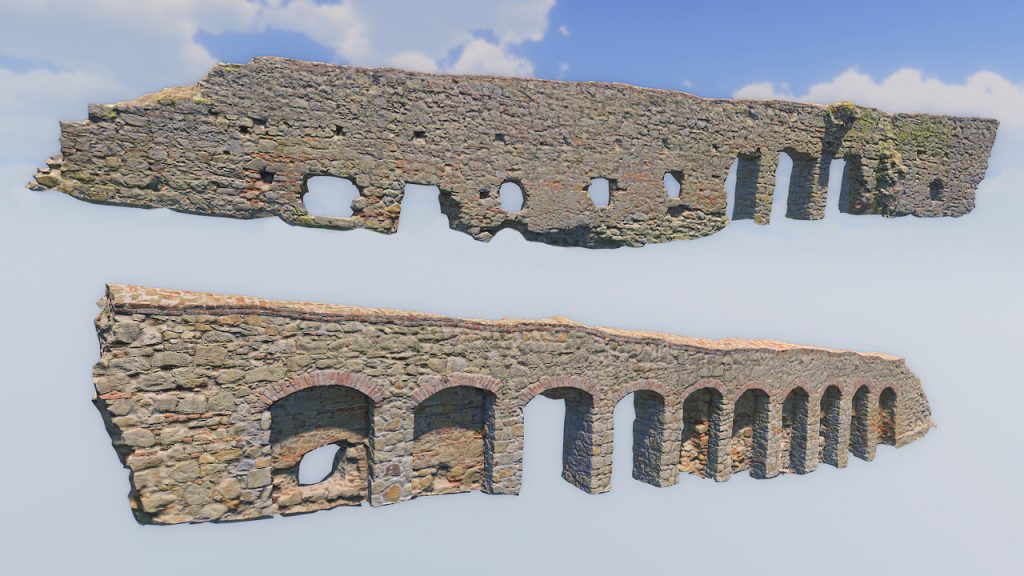 Old Castle ruins Arcades (in Melsztyn) scanned into our game – We visited some castle ruins to scan it whats more interesting after our scan the ruins were renovated so The End of The Sun world is the last place when You will be able to see that castle ruins state from before renovation.

Test of Physical beaded necklace. Every bead is the independent physical body that reacts to physic forces like gravity or friction. We will share more about it in-game dev post Connected to Cutscene Creation. 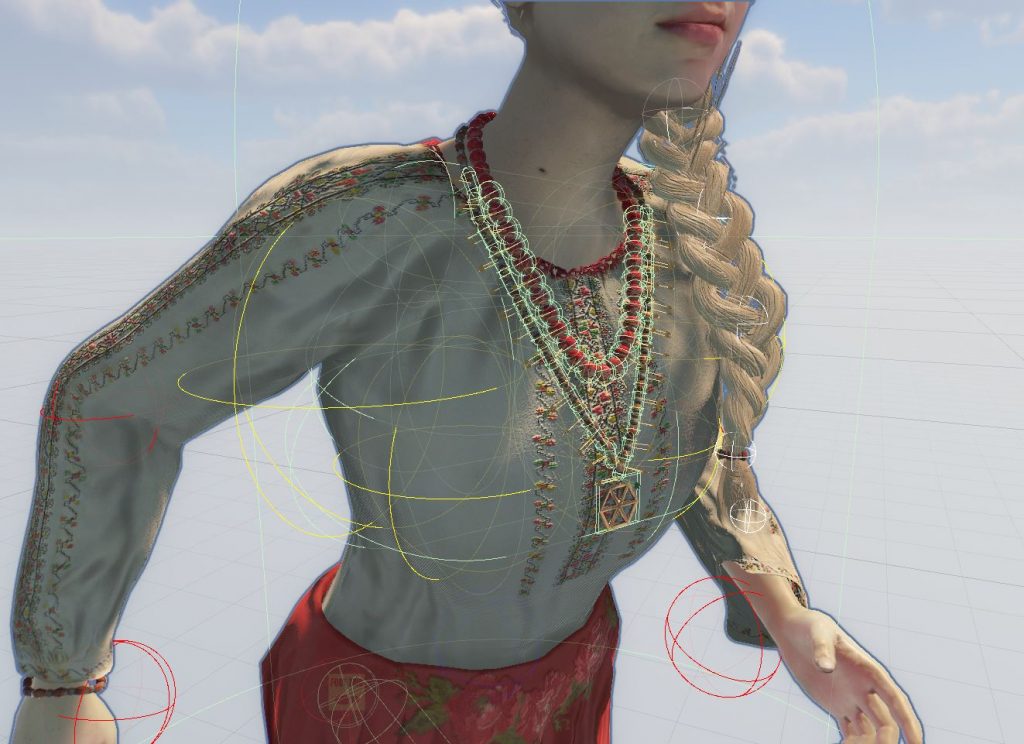 This is how rigid body physics chain looks on that necklace

CUTSCENE BEFORE improvements. We know its hard to see the difference on small GIF, but look how Sophie Eyes are wide open She looks like scared (This is because lack of eyelid movement) also The hair and clothes of characters are very stiff. Of course, this improvement is applied to all cutscenes, this is only an example.

CUTSCENE AFTER actual improvements – Eyelids follows eyes’ look target + added physics of clothes (You could notice it especially near Sofie’s hand when She hugs Nadimir + Hair have also some more dynamics behaviour + face talk and emotions are much smoother + New shader that takes Ambient occlusion – Sophie have melancholy emotion than Scared like before improvements. (Hands are still something that would need improvement but please notice that even huge triple-A studios have problems with that)

The small thing that adds some immersion – Pickup up and Take animation for interactive objects.

Folders inside of unity Engine – We are using Rainbow Folders 2 asset which gives some colours into folders for better organization.

In a big corporation, this kind of job is made by the whole teams of people, We do it on our own, this is why sharing our posts and Your support is so great for us! We are incredibly grateful for that!

Marketing and updating our webpage, steam store and social media could take 2-8% of our workday. Of course, it depends on the situation.

1.Continuation and finish of work on main storyline missions, cutscenes and puzzles – Now when we have already finished all needed storyline asset and scripts as well as finished all in-game characters We can finally focus totally on work connected with main gameplay.

2.Improving and changing some story-line elements connected with gameplay – When making video games it’s impossible to predict every small thing in the game design document. Story and gameplay design that we wrote need some minor improvements. Why? Some gameplay systems that we created during the game production guide the shape of certain plot details to the slightly different track. It’s not about changing the main storyline but changing some details basing on new possibilities connected to developed gameplay mechanics.

3.Creating Additional puzzles – that we collected funds for on Kickstarter.

4.Polishing game world Locations – Assets are finished but some location needs some improvements and level design, especially that every location has it 4 versions (for every season of the year)

5. Finalizing Work on “Beyond Reality” – It’s just a special location When You change the season of the year. It needs just a typical graphical design. We have few ideas, but we leave as one of the last elements cause it has elements connected to gameplay too.

6.Recording all voiceovers and preparing localisation of the game – This 2 elements will be made partially in a simultaneous way. It’s also worth to mentions that we will firstly record voice-overs with our local actors to be able to make beta tests of the game.

The End Of The Sun DISCORD CHANNEL