The End of the Sun

The End of the Sun Team | TBD

We are very small team with even smaller budget so – soon we will start Kickstarter crowdfunding campaign where you will be able to get the game and help us finish the project: Kickstarter.com

The End of the Sun is a first-person exploration and adventure game, where the story has the most important meaning, as it is set in the world of Slavic rites, beliefs, legends, and their everyday life. It is a series of mysterious events that ordinary people dealt with, as they were living in a small village where the line between myth and reality began to fade perilously.

As the Volhv who is gifted with the ability to travel in time and knowledge about Navia (the space where human fates shape), you come to a mysterious village to find your friend, but you cannot find anyone there, at least not in a way you wanted to. All you can see are smothered fires around.

A story inspired by Slavic mythology and legends. It presents the events occurring during the 4 major Slavic festivals during the 4 seasons far away from each other in time. Recreates mystical events, culture and people’s habits in an unusual way. The game is inspired by both adventure and exploration games with unorthodox riddles to solve, but the story-line is in the first place here.

>Ethnographic museums scanned via photogrammetry – To get top-class graphics, we visited ethnographic museums where we scanned hundreds of objects and entire buildings, so you can admire them in the game the way they actually are. We also scanned the elements of the natural environment in order to get the most European Slavonic climate possible. 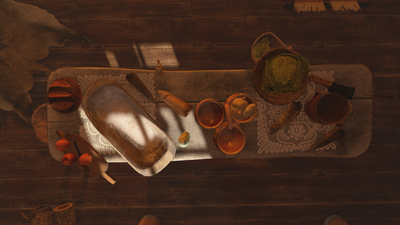 >Travel in time – teleport between four periods far away from each other by many years, set in four main seasons (Spring, Summer, Autumn, Winter). Get to know the stories of the same heroes at different stages of their lives. 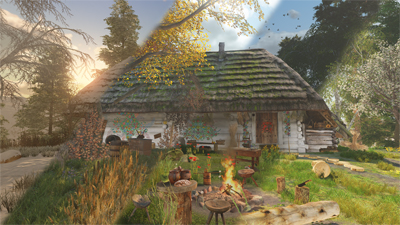 >Dynamic world, weather conditions, lighting – the time of day, weather and lighting change smoothly and dynamically within one day in front of your eyes as you discover other parts of the mystery. 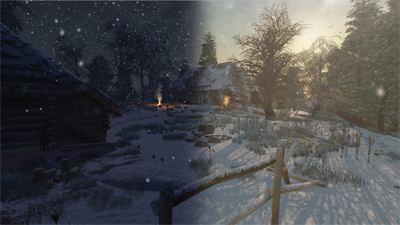 >Consequences of time travelling – certain elements of history and the world around you will open up to you only when you set the paths of fate and influence the future. Events from the past have an impact on the future. 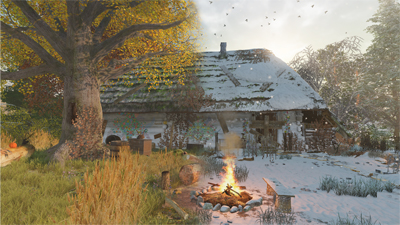 >Slavic World, its culture and daily activities – While experiencing the story, you will be able to enjoy not only the immersive history, but also look at the long-forgotten everyday activities and objects that are no longer used today. 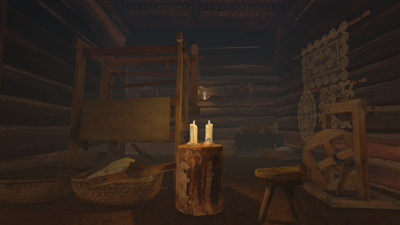 >Exploration – Travel between the homesteads and surroundings of the village, finding out the details of the mystery that lies somewhere there. 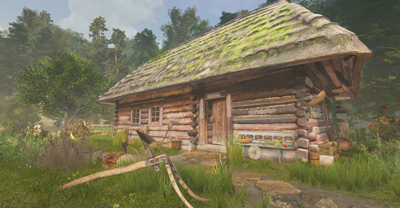 >Non-linear and engaging story – You can experience particular immersive stories at your own pace and at the moment you feel like it. 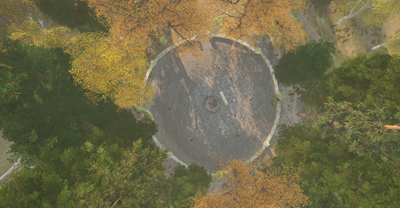 Tree of Veles –– Making of – Full 3d model on Sketchfab

We posted it on Facebook too so your friends could watch It directly there. Here is that post. But If You would like to share it on Your own profile not share from our fanpage. You could Download that image and that depth map image and just drag and drop to Your Facebook. It will automatically create 3d photo from that. 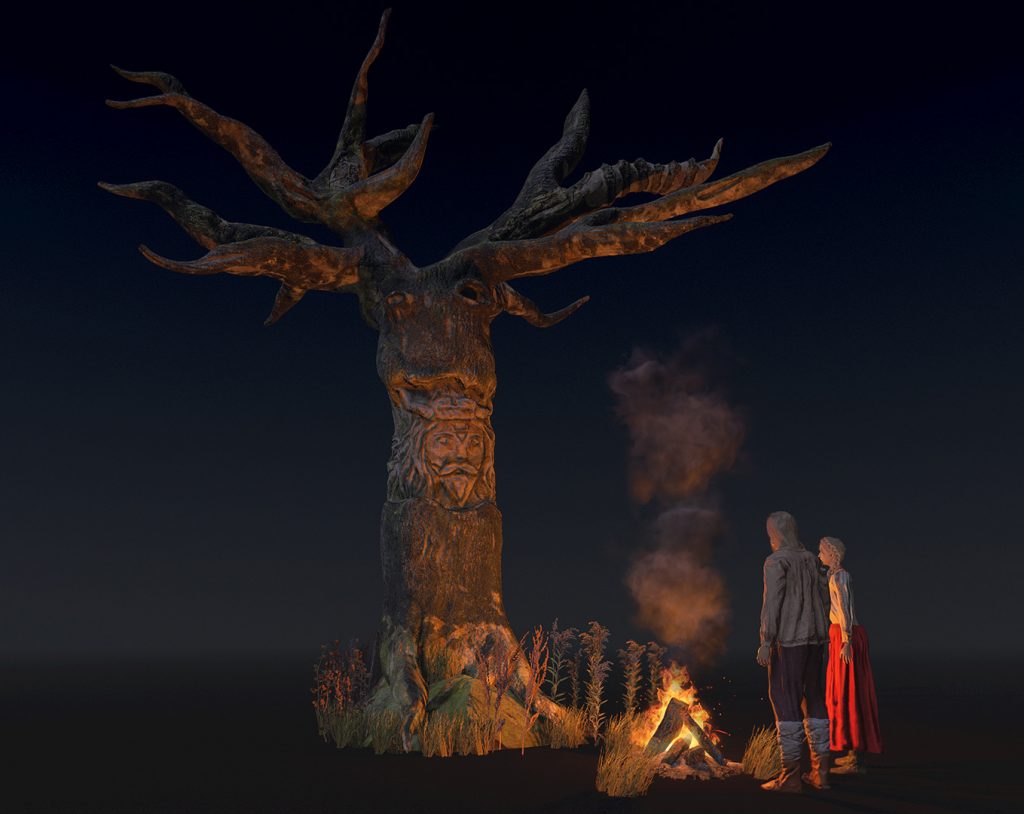 …How Halloween is connected to Slavic culture?

In the Slavic tradition the festival called “Forefathers’ Eve” ( Polish: Dziady ) was celebrated at the same time. (In old days it was celebrated on autumn equinox) It is a series of rituals and ceremonies celebrated in honor of the ancestors. It’s a day in which souls returned to this world in order to visit their family. It was celebrated in very Happy way. People were feasting, dancing around bonfires and drinking of course.

Veles is Slavic God of underworld (or more correct god of afterlife). His attributes are wet, wooly, hairy (bearded), dark and he was associated with cattle, the harvest, wealth, music, magic and trickery. Overall in Slavic culture, Veles God wasn’t seen as pure evil. He was worshiped like a power who care about ancestors in Navia (the afterlife world) 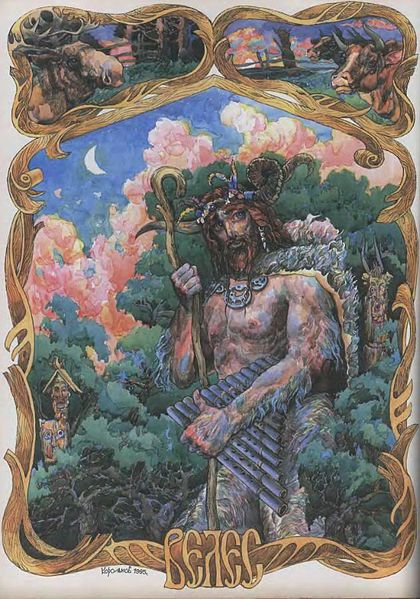 Other legends say that He was evil god. But probably because that legends were created in later days when catholic church change its meaning into Devil (Maybe Because of Veles horns they created devil image basing on Veles appearance to show pagan’s Gods as something bad, but it’s just guesswork) This is why We had some dilemma. Overall we think he was both. It depends on point of view. Bad people that were afraid of punishment showed him as evil, but for good people Veles was some kind of road to the other side.

Idea of sculpted tree – Why we put into the game tree with Veles sculpture on it ?

The End of The Sun story is placed in four seasons of the year far away in time from each other – “Forefathers’ Eve” takes place in Autumn. This is why in The End of The Sun You will be able to take a part in that festival ( In some way of course) :) Slavic culture is highly connected to nature, so We decided to show it also on that part of the game world. 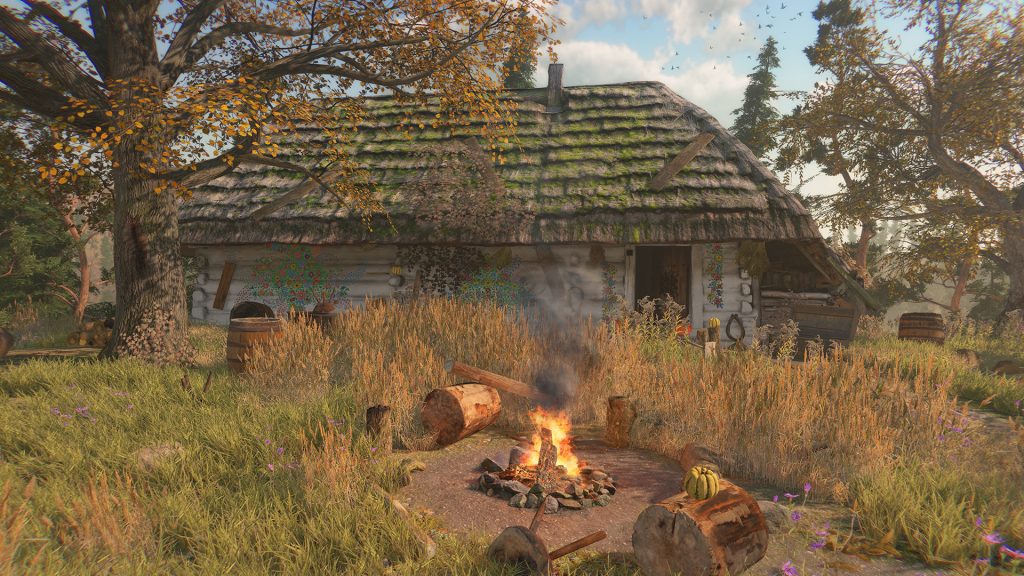 Old destroyed tree that is already dead but still standing is perfect place for sculptor to make some great art on it. That situations of using rest of old trees are very often in Slavic countries. We decided to get that idea and connect it with old believes and some dark mystery and create tree that will be center point of The End of The Sun village cemetery (but don’t expect typical cemetery that You know nowadays It will be something totally different but it is topic for different post) :) 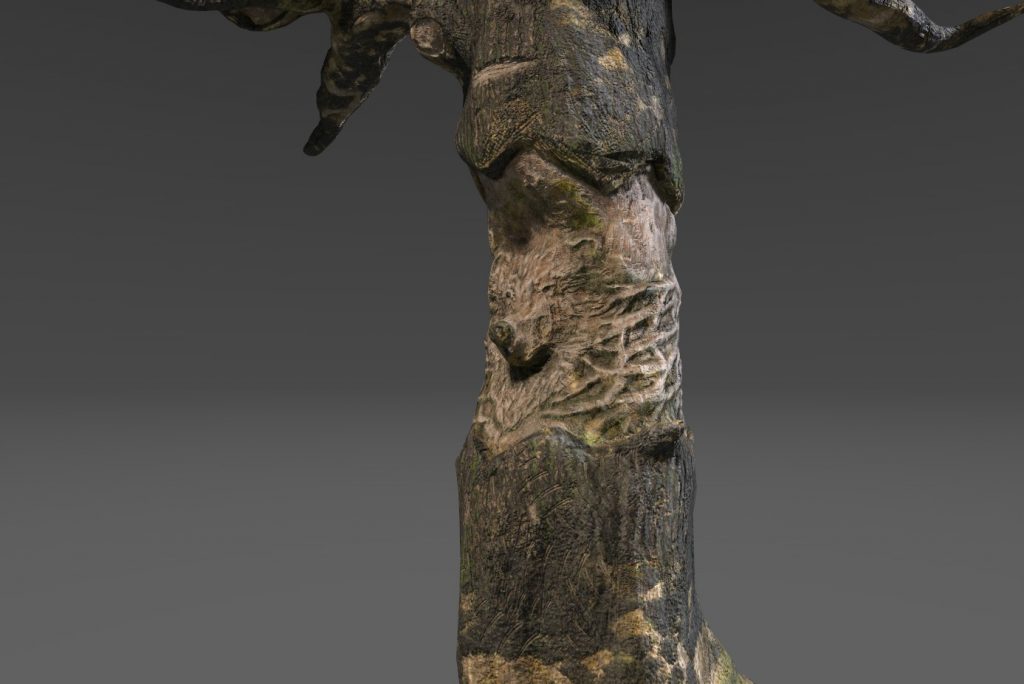 The Veles Tree desing & Making Of:

We would like to share with You some effects of our work as well as Full 3d Model of Veles Tree + 3d Depth Screen that also could be shared on Facebook :)

As some of You know we are using photogrammetry to prepare most of 3d models in our game but Not everything could be scanned from different reasons. This time reason is that old Slavic sculptures just don’t exist nowadays . Most of them were destroyed by time or people etc. This is why many elements of the game needs to be manually created in software. This is the process that we will show right now.

Because Technical process of creation was rather standard way of creation that many graphic designer use, We just mention that at first we sculpted 3D high poly model. W didn’t make Concept Art Here, our concept was our High Poly Mesh. Many Indie studio work this way to make workflow faster. 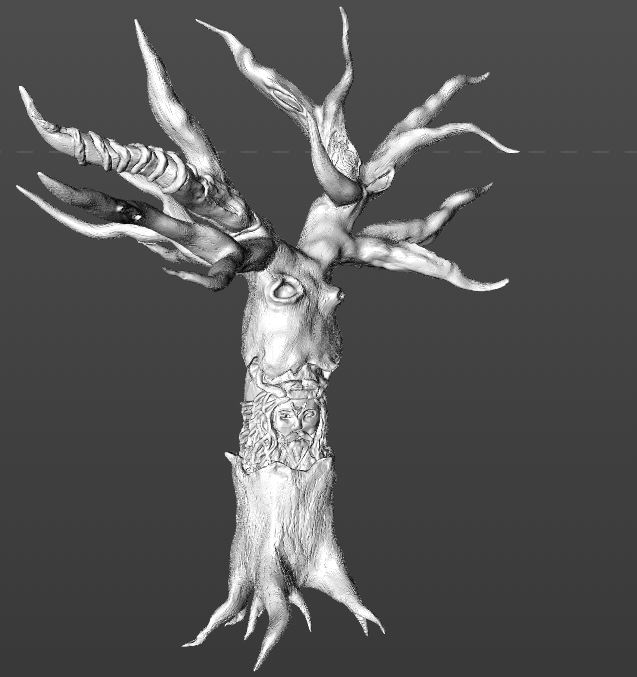 High Poly Model with almost 20 Millions of triangles. For nowadays PC it is limit for whole game not only 1 model. So we had to optimize it.

Then we made optimized version of that model that Unity 3d game engine and any PC could handle. 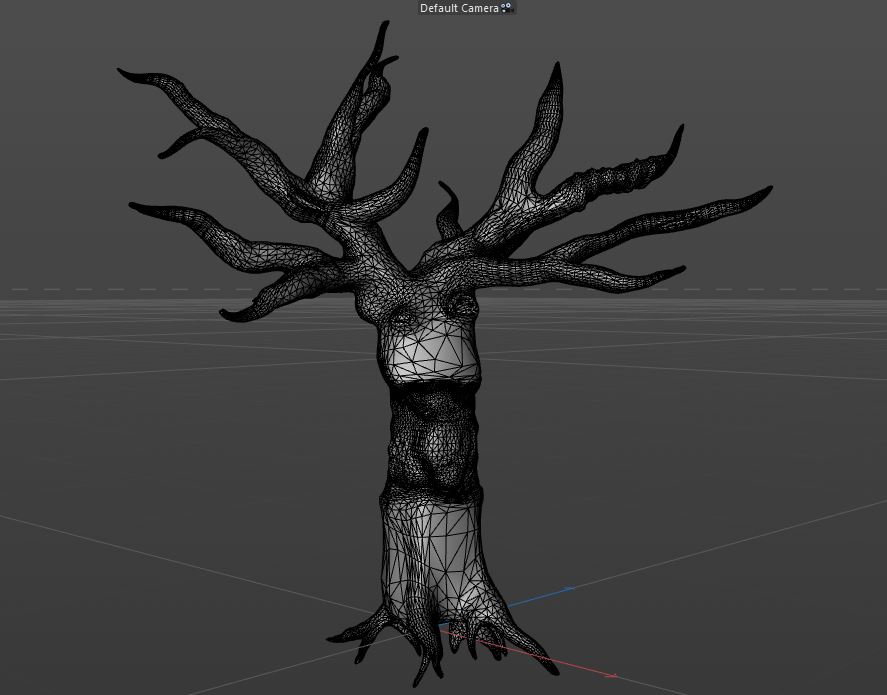 And then we baked details from high poly model to simpler low poly model. 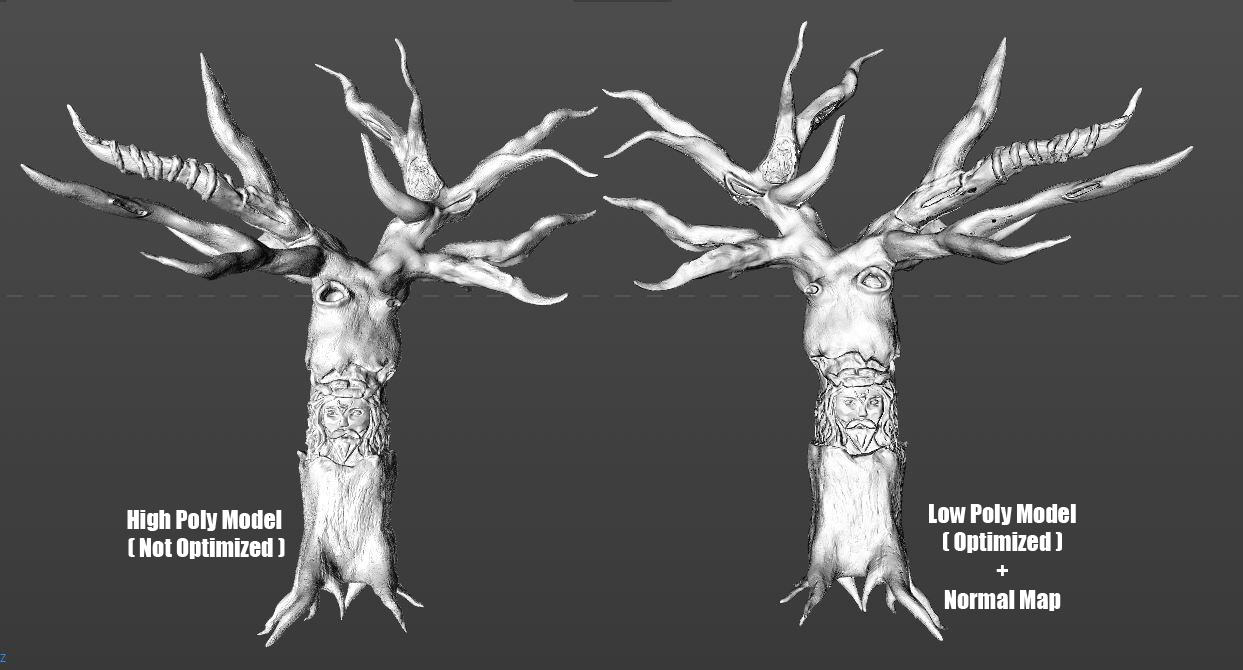 We write a lot about 3d models optimizations in our earlier gamedev blog posts so You could read about It HERE.

We didn’t make it with Photogrammetry so we have to create whole texture manually. We did it in Substance Painter that is a software that allows to work on many layer of textures in the same time.

On Gif below We recorded layers that we used when making the tree. Simple bark is not enough to give tree natural look. We painted some places with pure wood texture without a bark. This is old Tree so there is also additional layer with some devastation, moss etc.

You could see some layers on Gif. It could looks easy to do but it is complicated process. We needed a day of work ( about 10 hours ) to Prepare that textures.

We decided also to add some claws marks on the tree to give some more mystery here. Bear was animal highly connected to Veles God – this is why bear sculpture is on the other side of the tree.

Whole Model Is Created From Many Textures as:

-Color – that is Base Color of Mesh (without any light shadow, specular etc.)

-Normal Map – that We mentioned earlier. It give illusion of details and depth.

-Metallic / Roughness map – It gives information where model should be shiny as metal, and where rough as wood. Different places on Tree have Different roughness.

-Ambient Occlusion – That generates ambient shadows when model is already in the shadow. Notice that in real world even objects that are already covered by shadow, still create some darker areas/shadows.

Below you could see some of that textures presented on 3d model as well as Final Result (You could see all of it on your own in Full 3D preview on Sketchfab model. 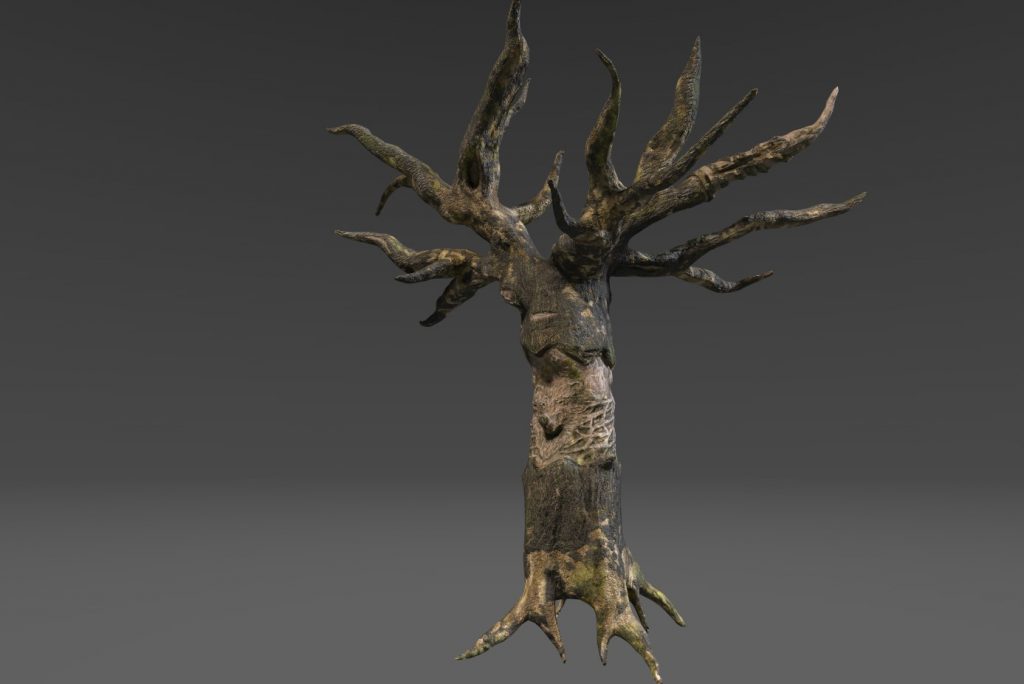 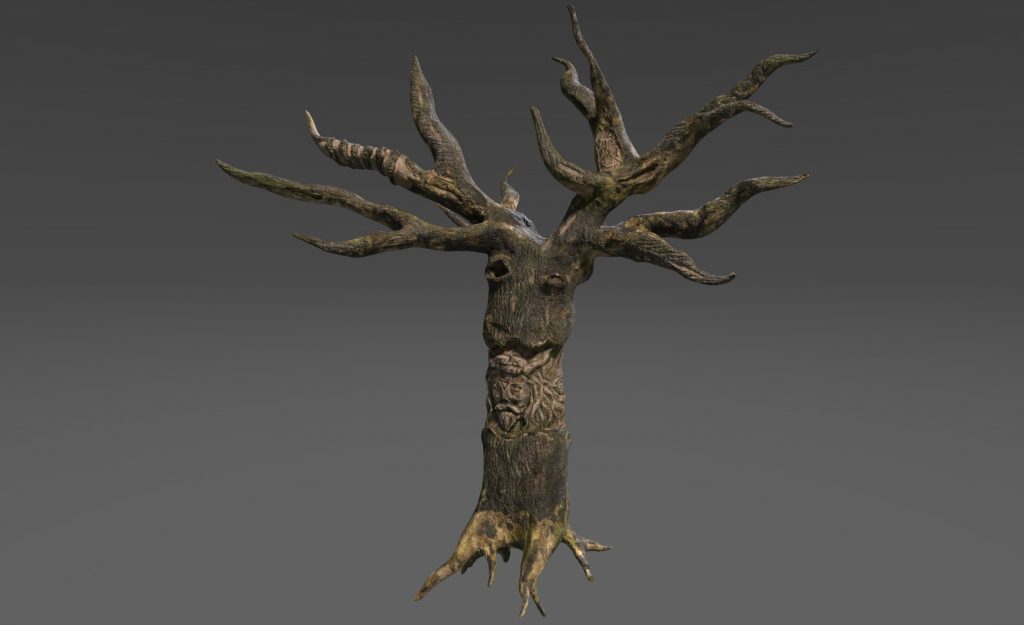 And Here is Full 3d Model On Sketchfab That You could play with!

Can You Help Us With Marketing?

It’s just few Minutes . Please Remember That We are very small Indie Team and We are making marketing on Our own. So It would be great If You could share that post, Connect to our social Media or share info about our game to Your friends :)

You could also still support us by PayPal & grab some rewards as digital copy of the game, T-shirt or limited box edition here:

Thank You for support!

What About Progress in game development? We are still working on last 2 locations and We are improving Characters look. We're changing things like Size...

Thank you <3 Great that you like it! Please if you are interested in our project follow us on kickstarter or add your e-mail to our notify list so we let you know when our crowdfunding will start :) It will give us More traffic boost on start :)
Endofsun.com

Indie
Tags
Embed Buttons
Link to The End of the Sun by selecting a button and using the embed code provided more...