In the 14th devlog of Ardenfall, the Open World RPG, read about all of the new exciting features coming to the project! New weapons, locations, monsters, and features are all found in this fantastic update!

Hello! Welcome to the 14th devlog for Ardenfall, the open ended RPG. This devlog is full of a lot of simple features and additions that add up in a very nice way! If you haven’t already, be sure to join our Discord to ask any questions and share your thoughts!

Toshi has modeled some new shacks for the wetlands 🙂 These are simple buildings for the impoverished wetlanders of Ardenfall, and yet have enough complexity to give it charm and interest.

New weapons were modeled by Toshi! These are a “genre” of weapons usually carried by Imperial Guards (The Golden Gaard) and other people of the same classification. Stats wise, they are slightly higher class than normal silver weapons. 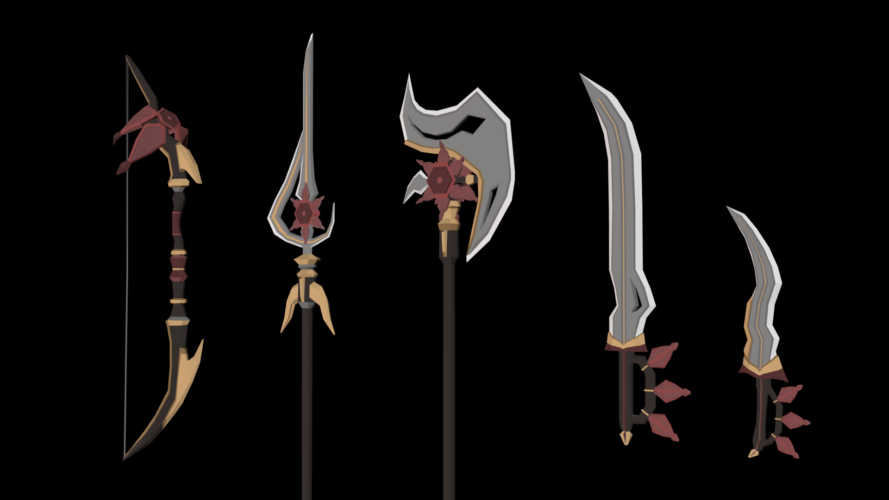 When killing a target, there’s a chance there will be a “slow-mo kill”, with time slowing down to allow you to see the destruction you’ve done. This clip also shows another small addition: all hits do a small amount of knockback, making combat feel a bit more dynamic!

Lockpicking is great for stealthy characters, but what about heavy characters with huge axes? Well, now they can join in the fun as well. Doors now have a ‘destructible’ option, which essentially gives it a health bar. These doors also have a ‘minimum damage value’, which ensures a certain amount of damage is applied to the door per hit – in other words, a small dagger won’t affect it, but an axe will!

Destroying doors is quite loud however, and will cause enemies to detect you quite easily. So be careful! Different doors will have different health levels to ensure leveling is fair and I also plan on adding destructible containers in the future. 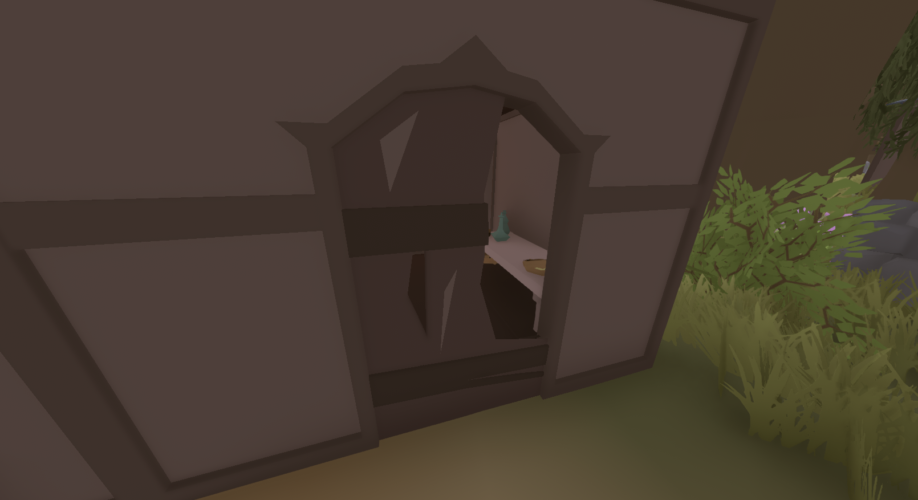 Merchants finally sell and buy items using dynamic prices – they buy low and sell high. Each merchant gets a list of “accepted item categories”, and any items that are not in these categories will have heavily lowered purchase prices for the merchant. The player’s speech also plays a part in both how high they can sell to merchants, and how low the prices will be for themselves. In the future I also plan on implementing the player’s reputation into the calculations as well!

Other small additions were added to the merchant menu, such as a special section for traded items as well as a helpful box that shows who’s paying what. It’s a start to getting the trade interface less confusing!

Equipped items now have a helpful arrow next to them, after realizing most players don’t realize the darker items are in fact equipped items.

I’ve also made it so hovering over an armor piece in the player menu will show what the armor looks like. I still need to make weapons appear on this character screen, but this is a good start. I’d also like to make it so when the player hovers over a generic item, such as a cup, it shows that on the screen, and if they hover over a note, it shows the actual writing.

I redesigned the quickslot system to be a lot more useful and friendly. It looks good, and makes life a lot easier! 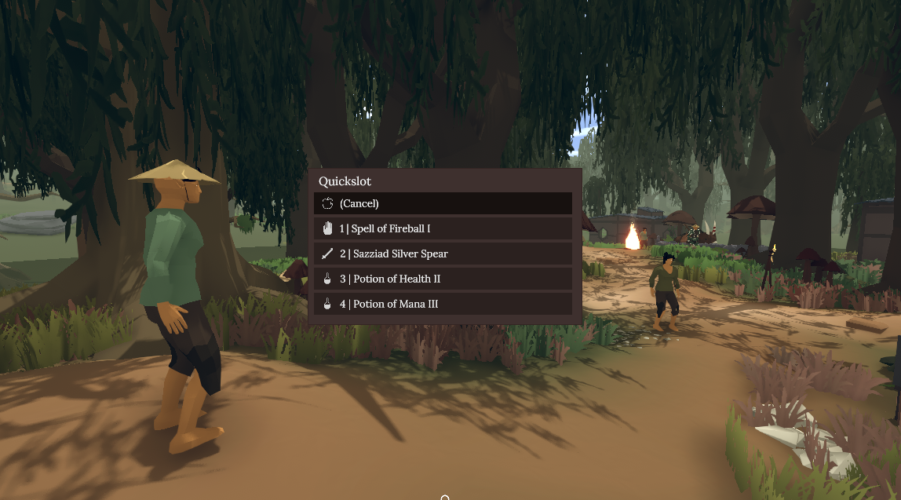 I’ve added a very simple form of fog of war onto the ingame map. I plan on making it prettier later on, but it’s a good start! At first I was worried that saving this information would result in bloat, but I added some nice optimizations that makes it basically not affect the save size at all. Huzzah! 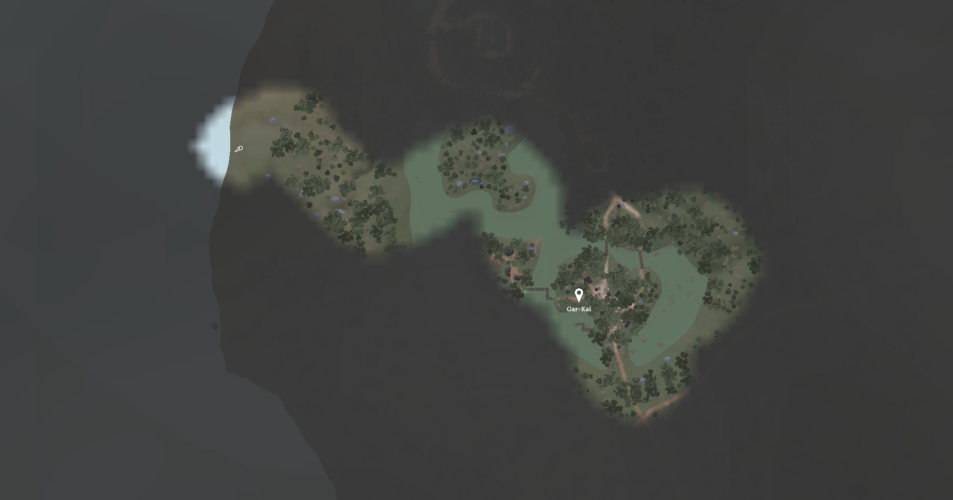 Work has begun on a dungeon generator! The goal is to build a tool that can generate a nice dungeon base, which will then allow the developer to jump in and edit it to their wishes. This fits perfectly into Ardenfall’s take on procedural generation – no procgen at runtime, and instead using it as a tool to aid us in building our large world. 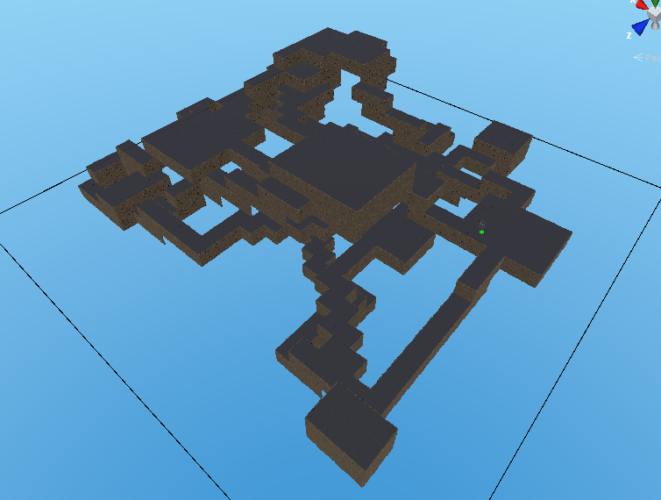 The Sapper, a character who illegally farms Moonsap for it to be produced into various drugs, is currently being concepted by AJ! I also modeled the characters quickly, quite temporary, but it’s coming along. 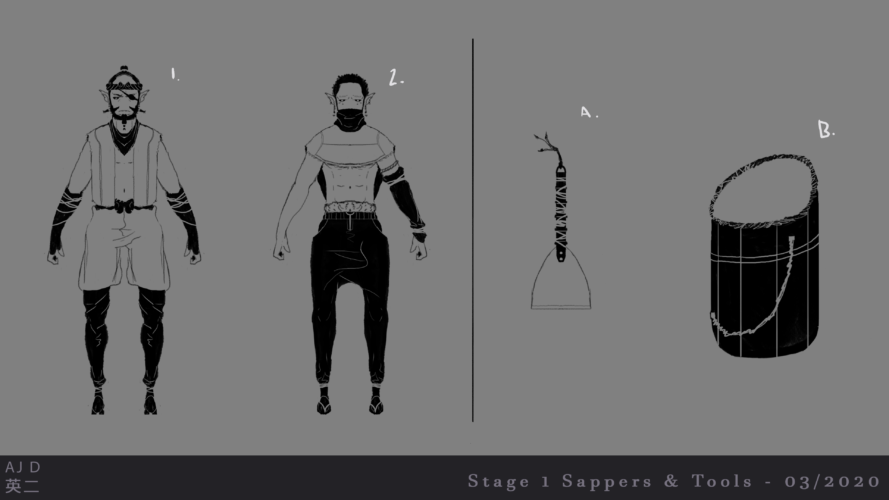 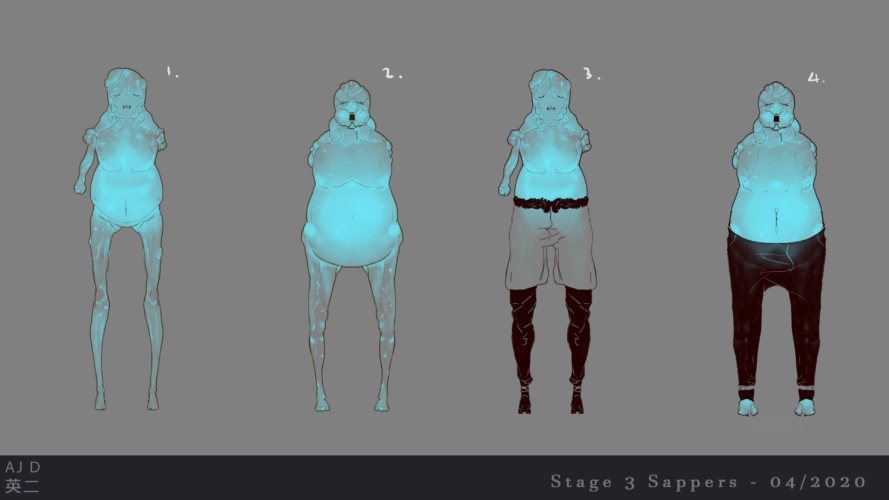 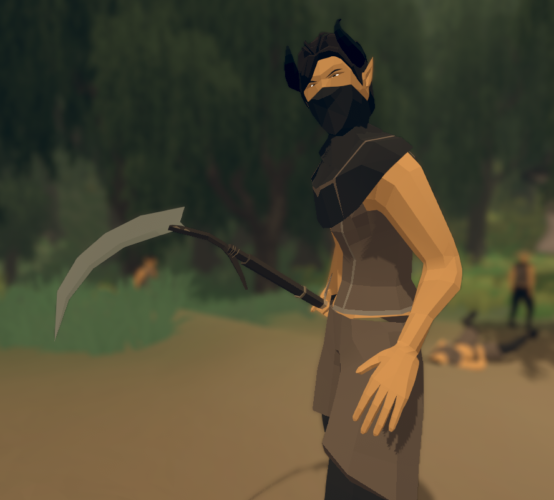 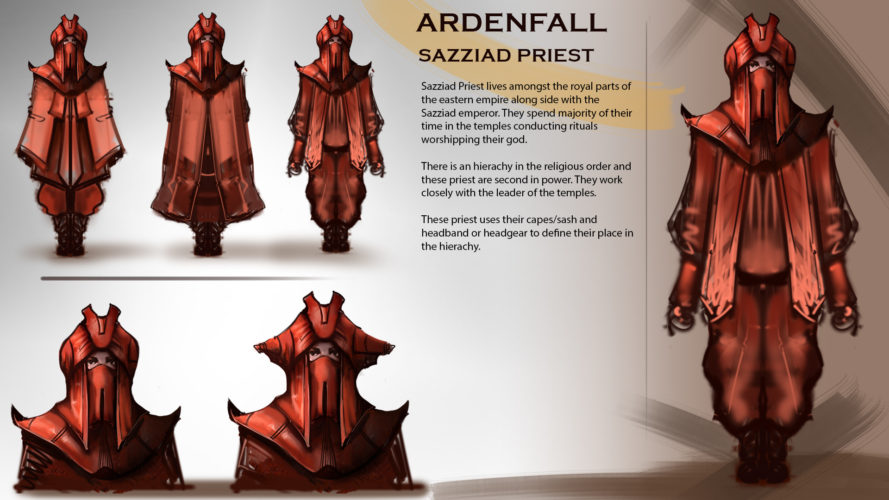 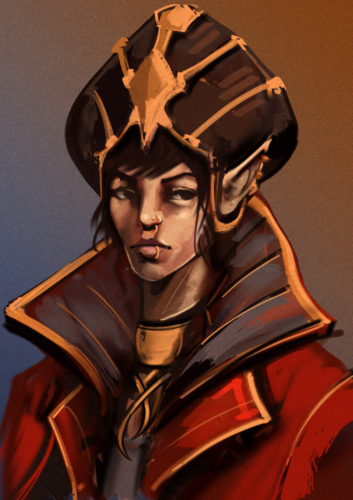 I’ve finally added better debugging tools ingame, which allows for various utility actions, such as changing the time of day or spawning a monster, as well as debugging quests and characters. 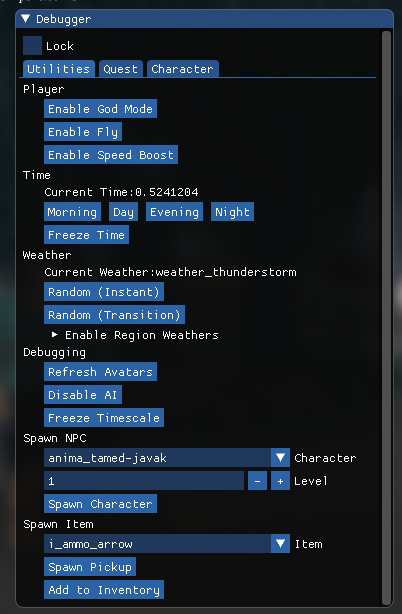 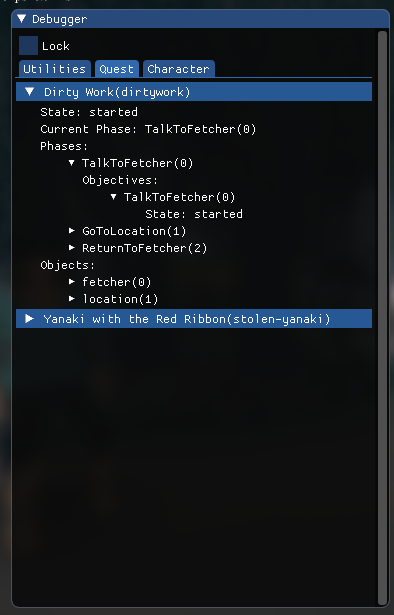 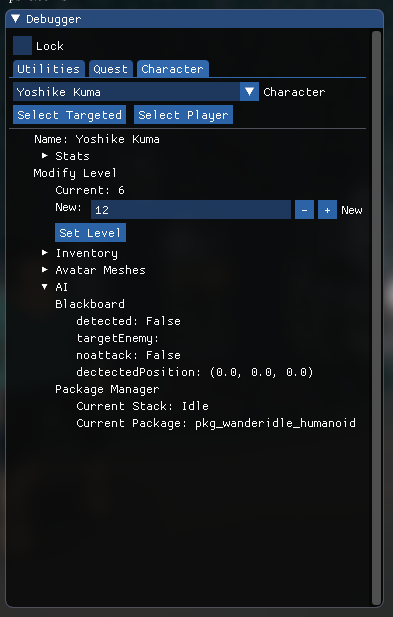 Other Changes and Additions

Faster Avatar Creation: The avatar system, which is what generates npc visuals, as well as handles merging of skinned meshes and atlas generation, has had some major speedups that make npcs over 200% faster to spawn!

Smarter NPC Spawn Distance: NPC’s used to spawn whenever their owning chunk loaded. This resulted in NPC’s spawning at a maximum distance of 450 meters (1.5 chunks), which is absolutely absurd. Now I’ve redesigned the spawning system to allow NPC’s to spawn whenever the camera is within a certain distance. I’ve found a distance of 80 works nicely! Eventually I plan on adding support for custom render distances per race, which will let larger npcs spawn farther away, and smaller npcs spawn closer. I also may end up needing some npcs to spawn SUPER far, farther than the cell spawning, which would require some redesigns. This would be mainly for large flying monsters, which often end up needing very far render distances.

Save File Compression: Before, my save files ended up being around 300 KB for an area of 2 dozen NPCs, a few items, and a few chests. Not the best. However, after throwing GZIP compression at it, the save file size went down to 30 KB! I may end up adding more save file optimizations later, but for now that’s completely passable.

Interior Weather Lowpass: Rain and other weather sounds now receive a low pass filter when the camera enters interiors. This adds a wonderful “rain on roof” effect! It’s amazing how small features like this really add to the experience.

And that is it, wowee 2 months of content! I hope to start doing video devlogs soon, so we’ll see where that goes. For now, be sure to join our Discord! Have a wonderful day, friends.

The weapons look great! Don't know if we can turn off slow-mo tho, it may get annoying after a while

Thanks! And it only happens sometimes, not every time. If that was the case, would it not be annoying? I could easily add an option to disable it regardless :))

I think adding an option to disable slo-mo is a good idea, after hours of the game sometimes you'd rather just get to the kill.
Just as well, is it alright to give feedback on combat this early on? I think one of the failings of something like Elder Scrolls was melee combat being the most punishing. I think adding some more ways to interact in combat without magic could be neat (disabling, berserking, crippling etc). The combat is really speedy though, and I like the movement. I just kind of hope enemies could keep up in a way.
Ignore me, I think this is looking great.