Hello!
It's been a while since I made a proper update. The previous few weeks have been very hectic overall, and on top of that most of the game progress has been on fixing bugs and making minor tweaks here and there, so not really update worthy.

But now there's been some visible progress! Vactrains are now a thing. They're not quite functional yet, but I've managed to get building them down, and added the station building into the game. Vactrains are used to connect remote parts of the city. 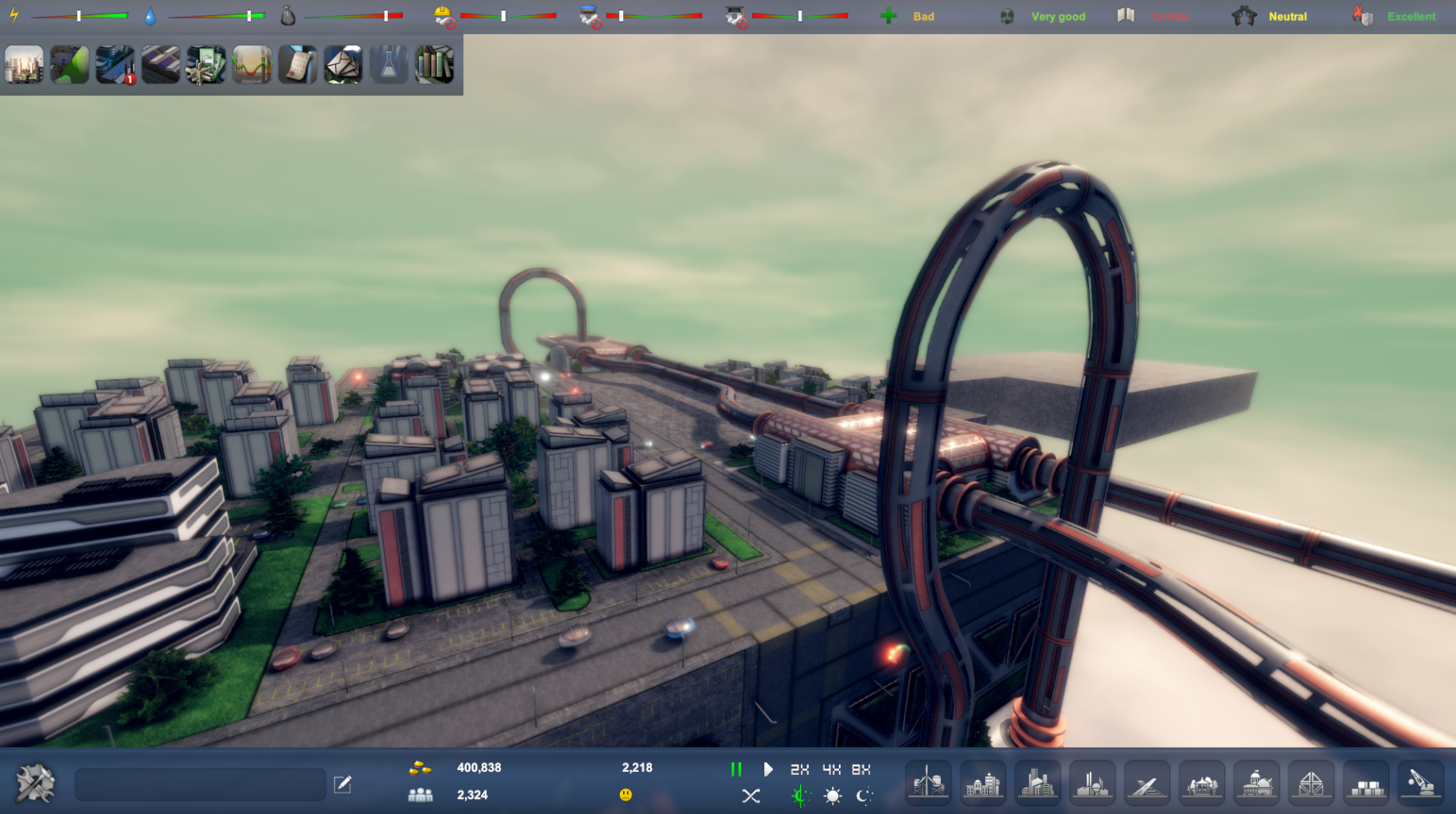 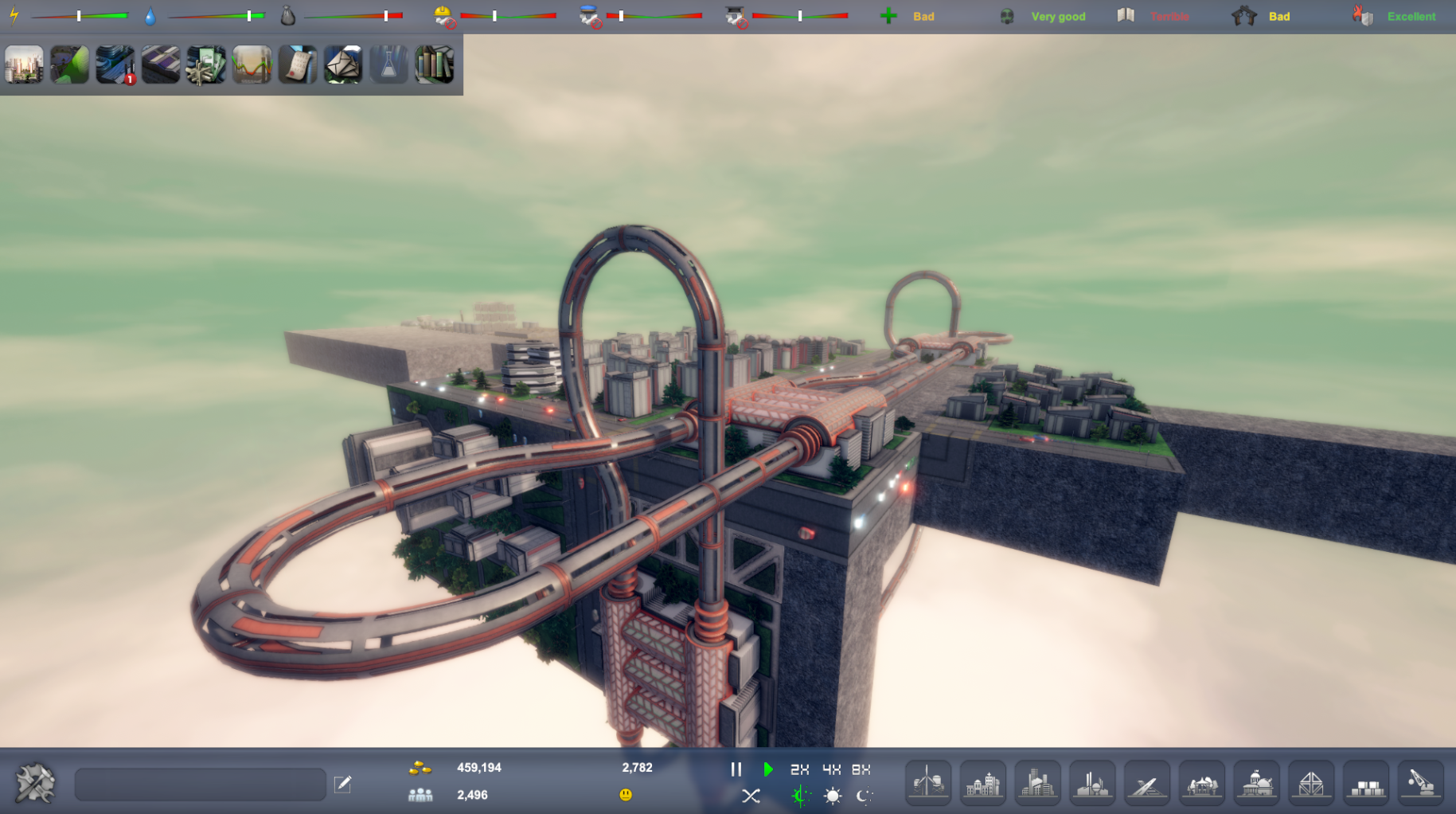 I've rebalanced the entire set of buildings changing pricing the resource requirements as well as some of the output levels. The next step in building management will be to add in the availability conditions. Some buildings will be locked from start, requiring a specific population for example, or that the building is first researched in a lab (which is a building that itself requires a specific population). Given that the vactrainstation has now been finished, only one building remains to be made for the early access release (atmoport). The atmoport will be a building placed when you enter a new city. This building will be the place where goods and citizens can travel to and from your city. 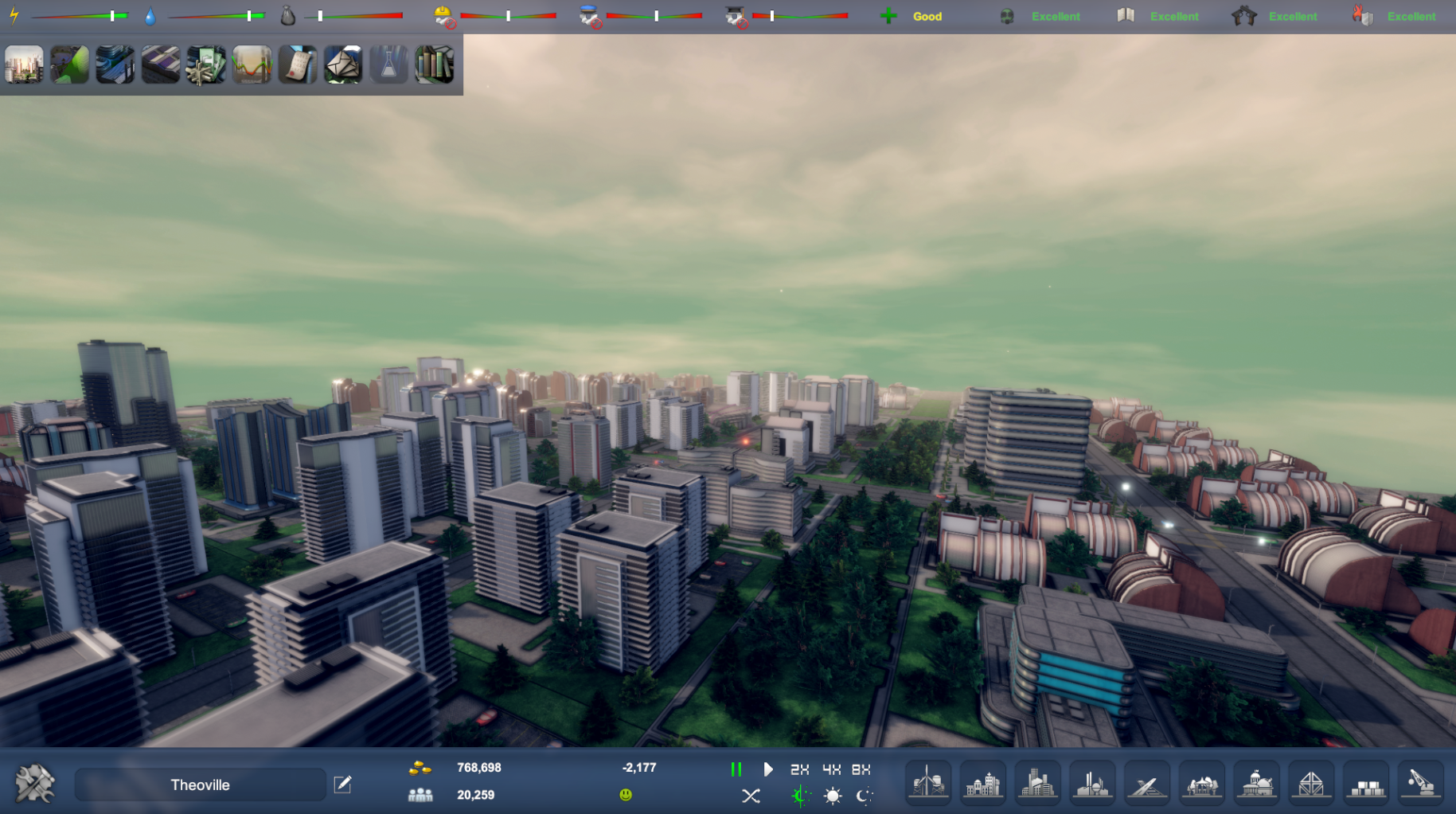 Another thing I'm working on, that has been prototyped earlier, is being able to set different skies. This won't affect gameplay, but can be used to add variation. Each theme comes with it's own skybox, and sun color temperature etc. 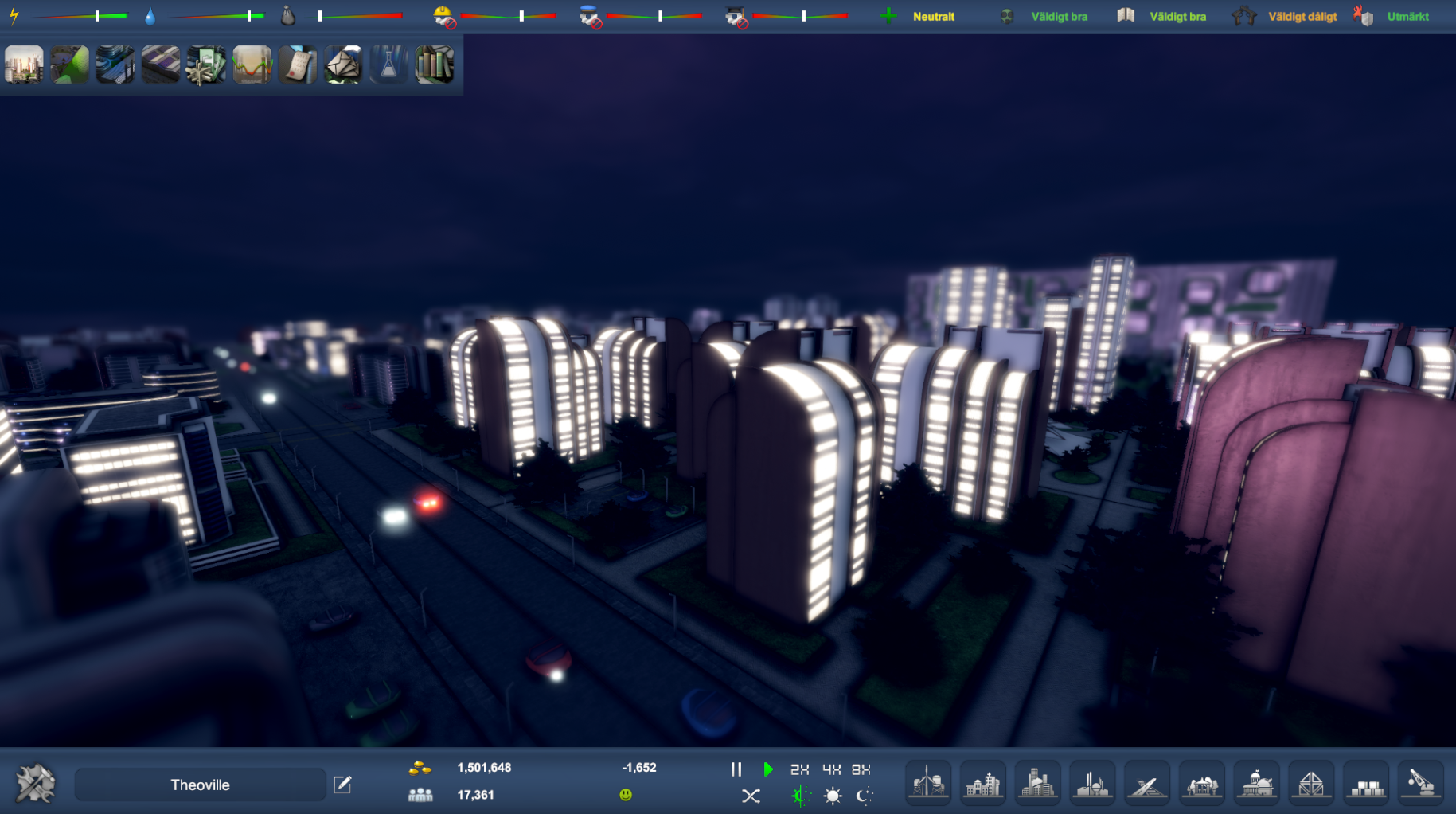 One thing that I've noticed will be important is to convey when things are missing or going poorly in the city. Currently, I've added specific songs from the soundtrack to play only when things a recession occurs. I've added a feature that the city doesn't light up at nighttime when there's no electricity. When you're low on electricity, a set of buildings will randomly not light up at night time. That way you get a visual queue that you need to expand power production. Once I add cop cars, ambulances and fire trucks, these will be more prominent on the streets when crime is high, health is poor or when fire safety coverage is low. 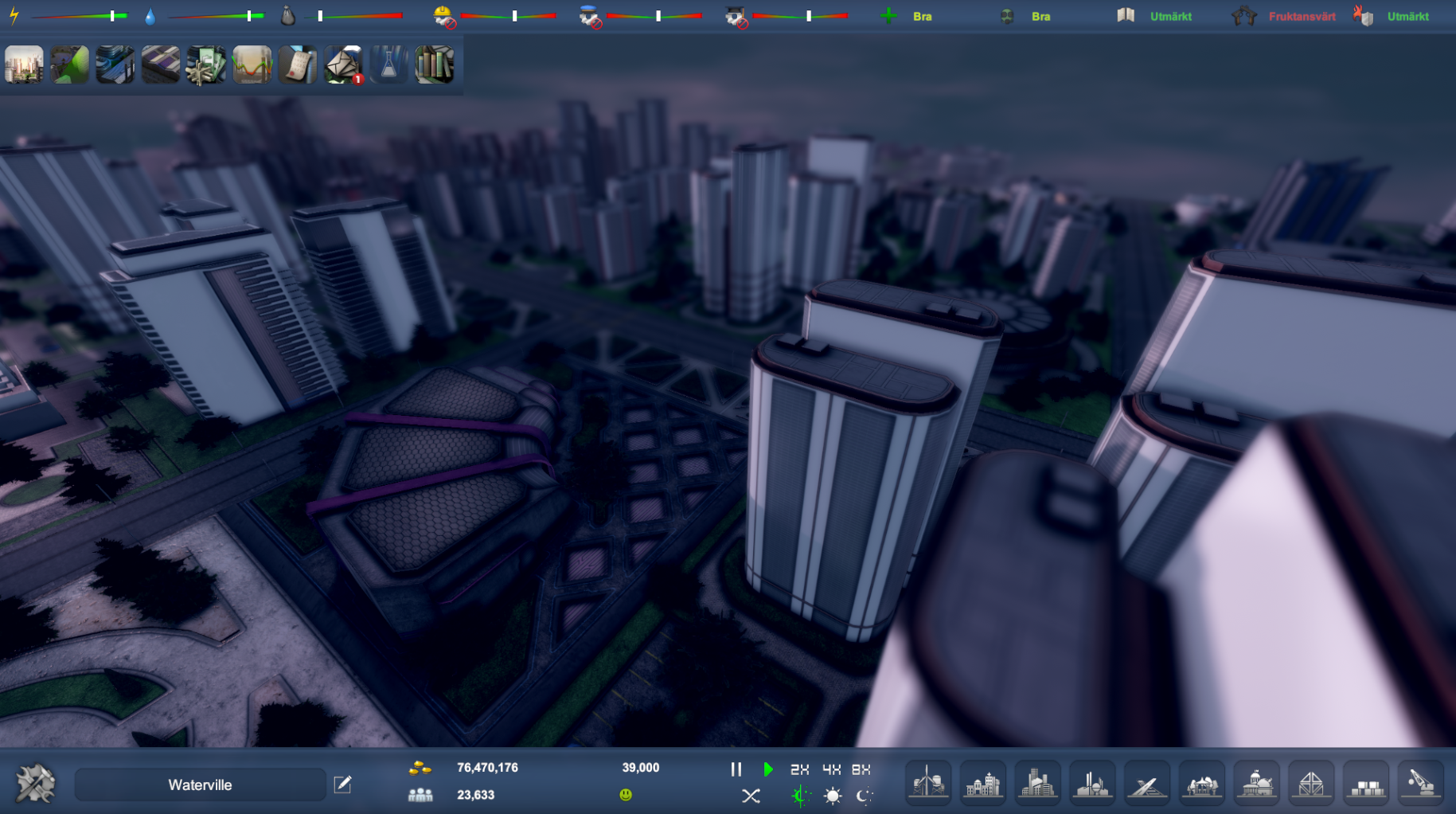 I've continued tweaking the economic system, changing costs and effects of policies and how long it takes for policies to reach full effect. Messages sent from the board of citizens and from conglomerates are now also saved.

Next week, vactrains should hopefully be finished completely. I also count on having most of the translations added into the game as well. I'm also adding some quality of life improvements like auto benchmark and some more options.