New devlog entry for #steampunkratgame. I'm rambling about gameplay mechanics, but the gifs are there.

As the release of the tech demo approaches and me being mostly busy with some dirty work (setting up the steam page, updating the presskit, etc.), I'd like to share my favorite game design patters (which I also am trying to put in the game):

Ah, I love this one and I use it a lot in the game. Nothing is better than allowing the player to make a decision - assuming that this decision really matters. I despise games that only give you a fake feeling of choice (like when during a conversation the only options are "go on" and "I'm listening"). But, if the player is aware that they can take the easy way or perform a riskier action which will yield a better reward, that's a good dilemma to have. There are quite a few places in my game where I'm using the risk/reward system:

Using explosives. It helps you to clear a lot of enemies quickly, but greatly speeds up the process of new enemies popping up.

Staying longer on the map. The longer the player decides to stay in combat, the more resources they can gather. On the other hand, staying longer exposes your characters to more enemies so they might die/get injured. 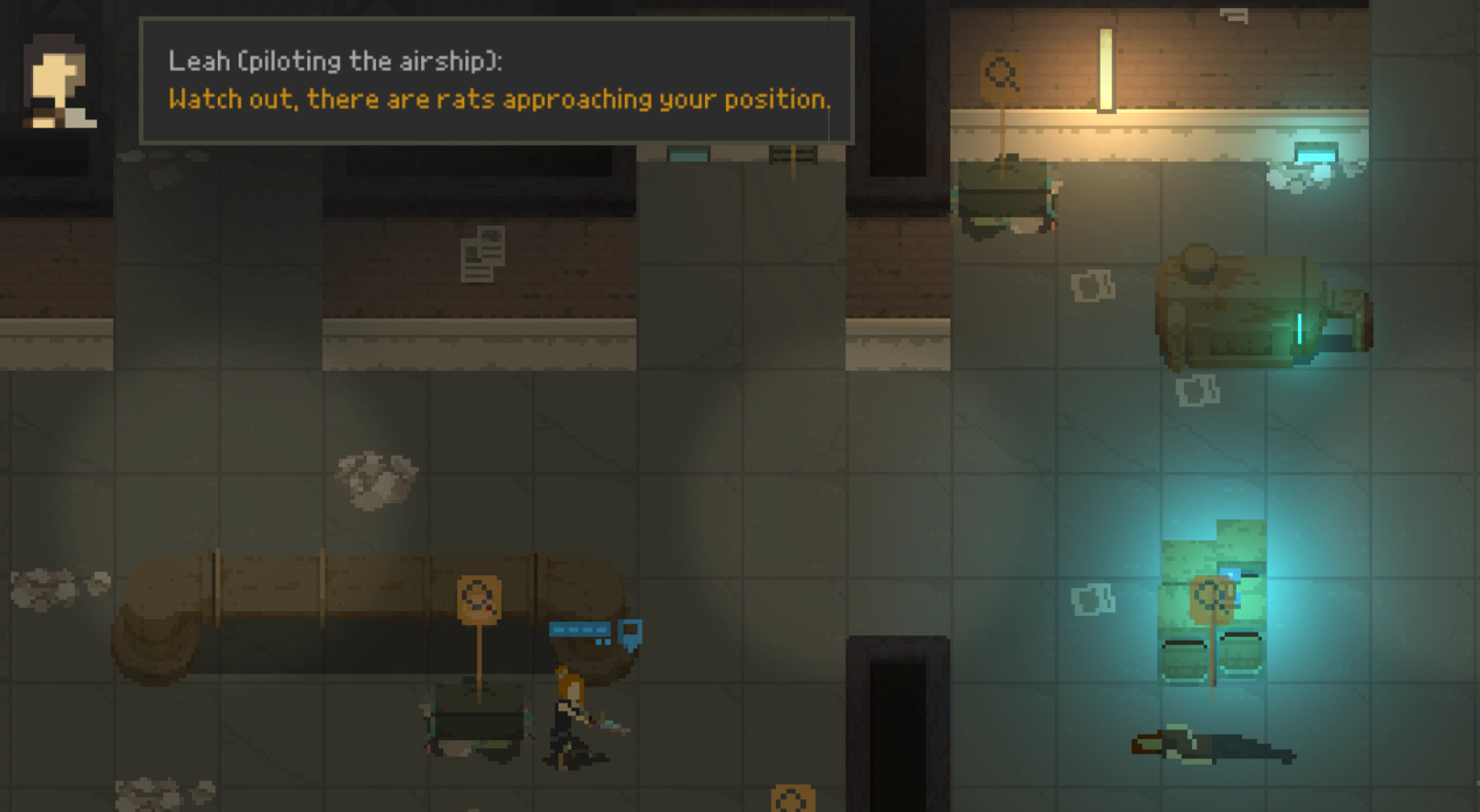 Note: this mechanic is not fully exploited in the tech demo of the game, as there is nothing besides the combat layer present at the moment - so gathering more resources does not grant you any tangible rewards.

Weapon overheat. Characters do not have to reload their weapons - they can continue shooting them. This even causes more damage to enemies but can damage the person who makes the shot.

Melee and other close-range attacks. Some characters can move extremely close to enemies and try to kill them from close range. If this is not successful, they risk taking damage during enemy turn.

When playing a turn-based game, I like having a plan. What I like even more is when the game screws my plan over and forces me to figure out a new way to get out of a bad situation. That's where the negative traits of characters come in - they do not get triggered very often (though the exact probability value is hidden from the player) but when they do, you need to improvise.

Emergent gameplay, allowing the player to create their own story

I am not into making games with linear narrative. Sure, the main storyline might be linear (XCOM 2 has only one happy ending, no plot branching or stuff) - but if the player can experience stories (and then even tell them to others!) during the gameplay, that's very satisfying. Think of any gameplay session of Civilization, XCOM, Alpha Centauri or such - I was always building the story myself as I go, and the game mechanics were helping me out in doing it.

I love when one has to re-visit the same location in the game, but the location itself has changed and holds different challenges or experiences. This is not present in the game but I am trying hard to find a good way of applying it somewhere.

As I mentioned, I don't like it when things are going smoothly during gameplay. That is one of the main reasons I dislike the late game in XCOM 2 - your soldiers are very overpowered and basically nothing can harm them. Still, XCOM has mission timers to make sure that you don't get too comfortable but in the late game you don't really feel pressured at all.

Again, my game forces the player to evac out from combat as soon as possible to avoid unnecessary damage. More pressure-like mechanics will come when the strategy layer will be introduced and the player would have to keep the squad alive and the airship running between missions.

Alright, I believe these are the main design pillars that I especially like. Note that this was purely about game mechanics. Stuff like visuals, audio or accessibility are also EXTREMELY important.

That's it for now. Note that there won't be a devlog entry next week, as I'll be at Poznan Game Arena. I won't be showcasing the game there - I'm simply visiting. I hope to meet a lot of indie developers, playtest their games and gather some experience for my future adventures with game development.

Also, do tell others about the game - it needs to gain more exposure. Thanks in advance!

Been looking forward to this game for a while. The art style is cool and turn-based is a favorite genre. Wishlisted a while back. ^^

Thanks! I am very excited to be sharing the tech demo of the game soon!

P.S. Since ModDB does not provide the ability to like updates and media content, I will do it my way.