Today I'll show you the progress on the new Equipment System 2.0, coming up with new gameplay changing objects.

Hi! It's been a while since the last devblog. Lots of things happened since (and not only development: family stuffs, administration, my cat need serious health cares, I was sick too, and many many time consuming things).

Today I'll talk a little bit about the new Equipment System 2.0 teased previously. It is not done yet, and there is absolutly no interface making it unplayable right now, but the part I've done is working great and I'm confident about the new features added.

For thoses that don't follow the small updates on our blog, this is a recap of what was done until now:

I have revamped the spaceship scripts for a better and smoothier gameplay that work better in the new 3D environnments, I also added brake/backward movements for more controls and sense of driving.

I also added a camera control for zooming in/out and changing a little bit of the perspective for your eyes sweetness and fixed several controls issues for mouse, keyboard and gamepad that came with the new camera angles.

You can control the angle and the height of the camera

You can go backward and also store acceleration for a better start!

I added a respawn mechanic (for when a spaceship fall in a pit or off the tracks), and also started tweaking the AI behaviours. Right now the competitors are still a little dumb but at least they follow the tracks much more efficiently!

I made a pass on the textures and I think I got something. It's definitely not final, but it's a good step toward what I want it to be in the final game (well, until a game artist joins the project) (if) (maybe) (don't count on it actually I'm too broke to get a professionnal artist). 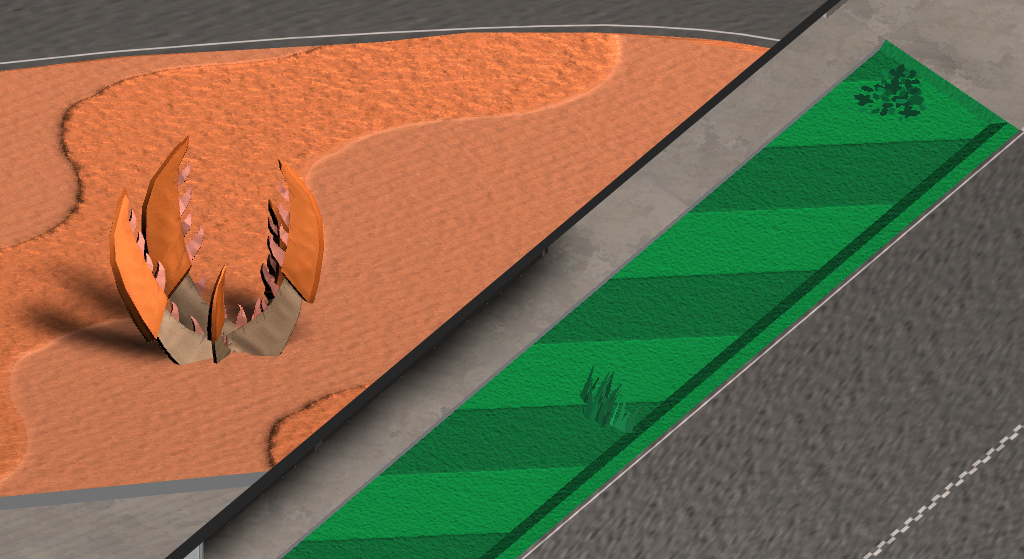 I tried myself on 3D rendering, and added some small details like 2D grass and stuff

In the previous system (or current in the alpha 1.0.1 build), there was 6 pieces of equipments, each altering the ship stats or enabling a certain gameplay element (like the Shield or the Turbo). There was two to three differents equipments for each with various stats changes to equip, or you could go stock with nothing on your ship.

The issue with this system was balancing. I want the game to be balanced for every pieces of equipments and that every spaceship is equal to one another, the win/lose ratio should be only a matter of playstyle. So with this system it felt like either I had to make unlockable better equipments, ruining the balancing of the game, or make only one or two pieces of each, making the entire system useless.

I asked my fellow game designer friends about that and one design stood up during the conversation: skill trees! Nice in paper, but wasn't really compatible with the game.

So I thought outside the box: why not simply cut off the current equipments and make something more object driven?

I cam up with two differents style of equipments: {Actives} and {Support}.

{Actives} equipments are objects that can enable a certain gameplay feature, just like the Turbo in the current build.

The Turbo gauge in Alpha 1.0.1 changed to an equipment gauge. You can start filling the gauge with the [equipment] key ([space] by default). The filling time requirement depends on the equipment you have. Then, you let the key and the equipment is triggered. There is then a cooldown time before you can use your equipment again.

Each {Active} equipments have now 4 variables: two personnal variables (eg: Turbo has a MaxSpeed variable and a TurboTime one), and two general variables that are ChargeTime and CooldownTime.

I wanted to tie the races (in Free mode) and the Story mode, where you can unlock new equipments, spaceships and earn money; I thought it would be nice to have some sort of "Star" money you could spent on improve certains pieces of equipments. 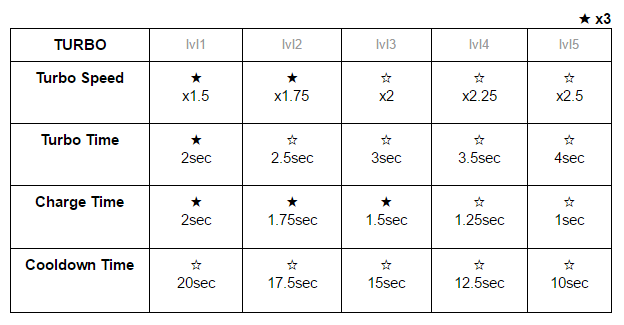 Example mockup of the Turbo variables table and 'star' levels

Now I know, I said I wanted the entire game to be equal for every spaceship by not doing betters unlockable equipmens. But I feel that new system is much more rewarding concerning the Story mode and add a sense of achievement and improvement for the player. It also add a little bit of replayability and who knows, maybe you could discover new ways to play or enjoy the circuits with a more powerful piece of equipment!

I already started implementing some of the new gameplay changing equipments. Thoses are a few I've done, and more are down the line:

There are more coming in the future. Stay tuned!

Previously we had the Shield and the Armor, and some stats changing equipments. I have combined them in one equipment type: the {Support} equipment.

They are passive objects that alter your stats, fuel and health. Some activate special features during specifics situations. Just like the {active} equiments, they have two main variables, but no chargeTime & CooldownTime since they are passive.

This is a non exhaustive list of the support (passive) equipments:

Some visuals of the passive {Support} equipments

The other part of the {Support} equipments are the stat changing:

Now that we know what we can get in the races, how do we equip them?

It was also a tough question, but I finally found a system that can work: Slots.

Basically, each spaceship have a set amount of slots. There will be always one {Active} equipment (remember it is enabled with the [SPACE] key. I don't want to over complicate things by adding multiple keys or ingame micromanagement).

The remaining slots are filled with {support} equipments. It's up to you to build your perfect loadout! But keep in mind that every circuit is different, so if the Turbo may be a good idea for a circuit that have long straight lines, it could be a nightmare on a curved and slanted roads.

That's it for today! In the next Devblog I will show you the progress on Health System 2.0. I didn't do it first because it is tied with the {Support} equipments, and I wanted to finish that first. When all thoses systems are done, the AIs will get some love, then I'll finish the basic circuit, textures, props and lighting pass and stuff, and we'll be in the right track for the Alpha 2.0!