Manage your speed, torque and handle, stay in the tracks! The real challenge is keeping your ship from drifting off road. Wheelless has tracks with jump pads, interactive scenery, and even hyperspace!

There are six differents equipments to attach to your ship : Armor, Shield, Main Thrusters, Manoevring Thrusters, Colling System and Fuel Tank. Every equipment changes the stats and unlock certain features!

Eleven competitors race against you on alien planets, derelict factories or even in deep space!

Wheelless also features a multi layered scenario splitted in six paths.
Each faction’s campain shows their own version of the main story, of course centered around racing.

This is the third millena, and the Milky Way is dying. The biggest factions refused to found their legacy on genocide: they, instead, established a fair way for every individual to win the remaining healthy stars.
The Race for Glory was suggested to settle the conflict: six factions will compete near-deadly races for the control of the whole new galaxy. Each faction has its own champion, and a second freelance competitor under contract. That is where you intervene!

The campaign will feature a lot of different characters, dialogues, choices and even 2D cutscenes!

The game is currently in early Alpha. During this development period, all builds are free to download! The current build features 7 spaceships, 2 to 3 pieces of equipments of each and 1 circuit.

What is the near and far future for this game? As the first Alpha iteration rolls out, we have started working on Alpha 2.0. It will contain more contents (new spaceships and circuits), some gameplay features (hyperspace, scenery interactions, NPCs) and a lot of bugfixes and reworks (espetially new AIs behaviors). Player customisation, shops and competitors conversation system should be in as the development of the campain starts.

Then: Alpha 3.0. It will have a lot more content and bugfixe. We will focus on the campain and work on a test campain path. It should be feature complete and have a lot of unpolished contents.

We will then aim for to Beta 1.0 where bugs are smashed and things polished, producing cutscenes, final graphics, audio and scenario lines.

Beta 2.0 will be near completion state. Then GOLD.

Greenligh entry should start in the near future. Stay tuned!

I take the opportunity of that new 3D spaceship model to make a quick devblog about the changes it cames with.

Let me introduce you to 3DEFAULT, our new test spaceship completely handmade by myself!

For those who just came onboard, Wheelless was in full 2D last year, and it was around June I found out about ProBuilder, making it easy for anyone to model something in 3D directly in Unity. Previous spaceships were in 2D, as pictured:

So, after some testing, learning and die & retry, here it is, the first spaceship in full 3D!

As you can see in the first gif, I've modeled the Hull and the Armor separately so I can BURN IT when damaged.

After some considerations, the chassis might not be included in the final game as it wasn't worth the time building it VS the time you'll watch it in action.

Catching up with already included features from the 2D versions, I've made some animations for the exhausts vents for when you use an {active} equipment:

On the new stuffs side, I added two sets of active lights along with 'burning' animation for the thrusters:

Rear lights are enabled when you hit the Brakes button/key. The burn animation from the thrusters activates when you are moving.

When entering a dark area, you'll need some lights for revealing the path in front of you: Headlights!

Headlights will automatically be enabled when entering a low luminosity area, or at night.

Obviously, all these features won't be the same for each spaceship manufacturers. For example, alien style spaceships would have some bioluminescent organic lights, robots would have neons and humans some LED-like lights. Same with the read lights.

I've also updated the shields to a 3D model: 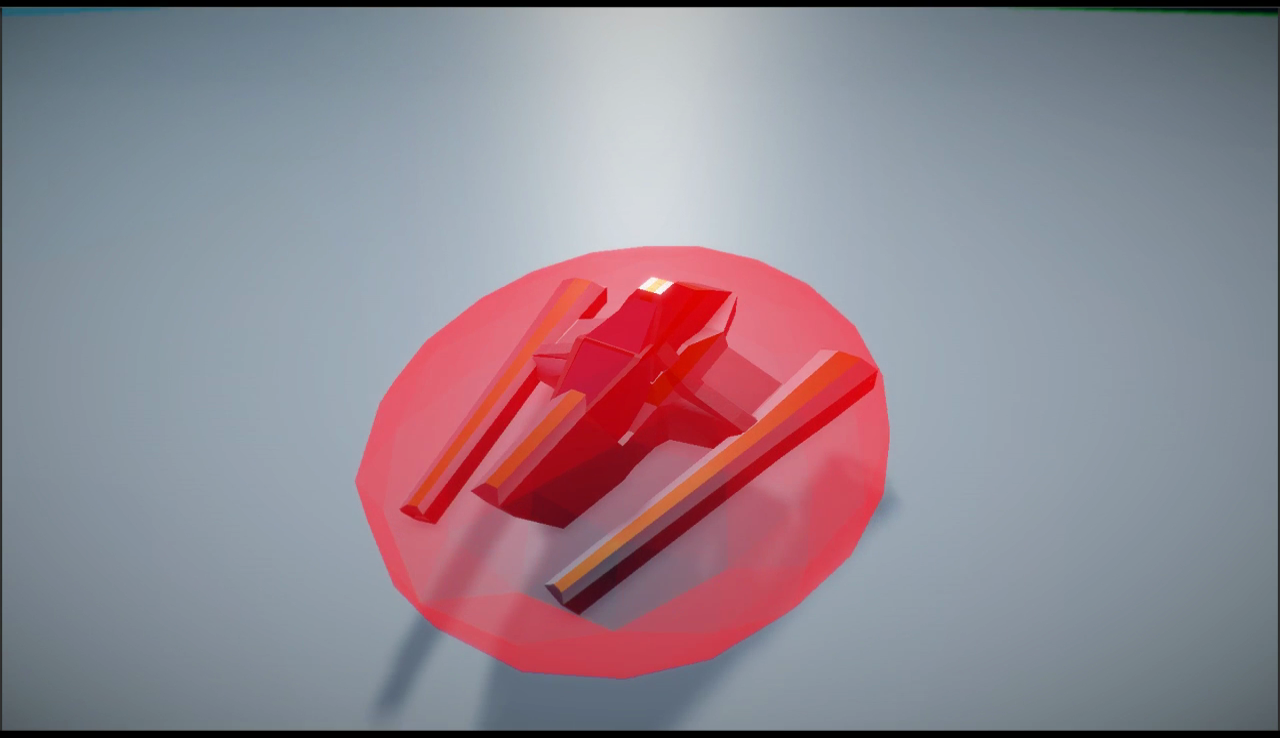 Gameplay wise, the Shield is exactly the same as described in the previous devblog, it is more of a graphical update than anything.

Finally, customised decals are easier than ever with the new materials settings I used for this version (vs the horrible multiple sprite layers nightmare from the 2D system), so color swap is a one-line code change! 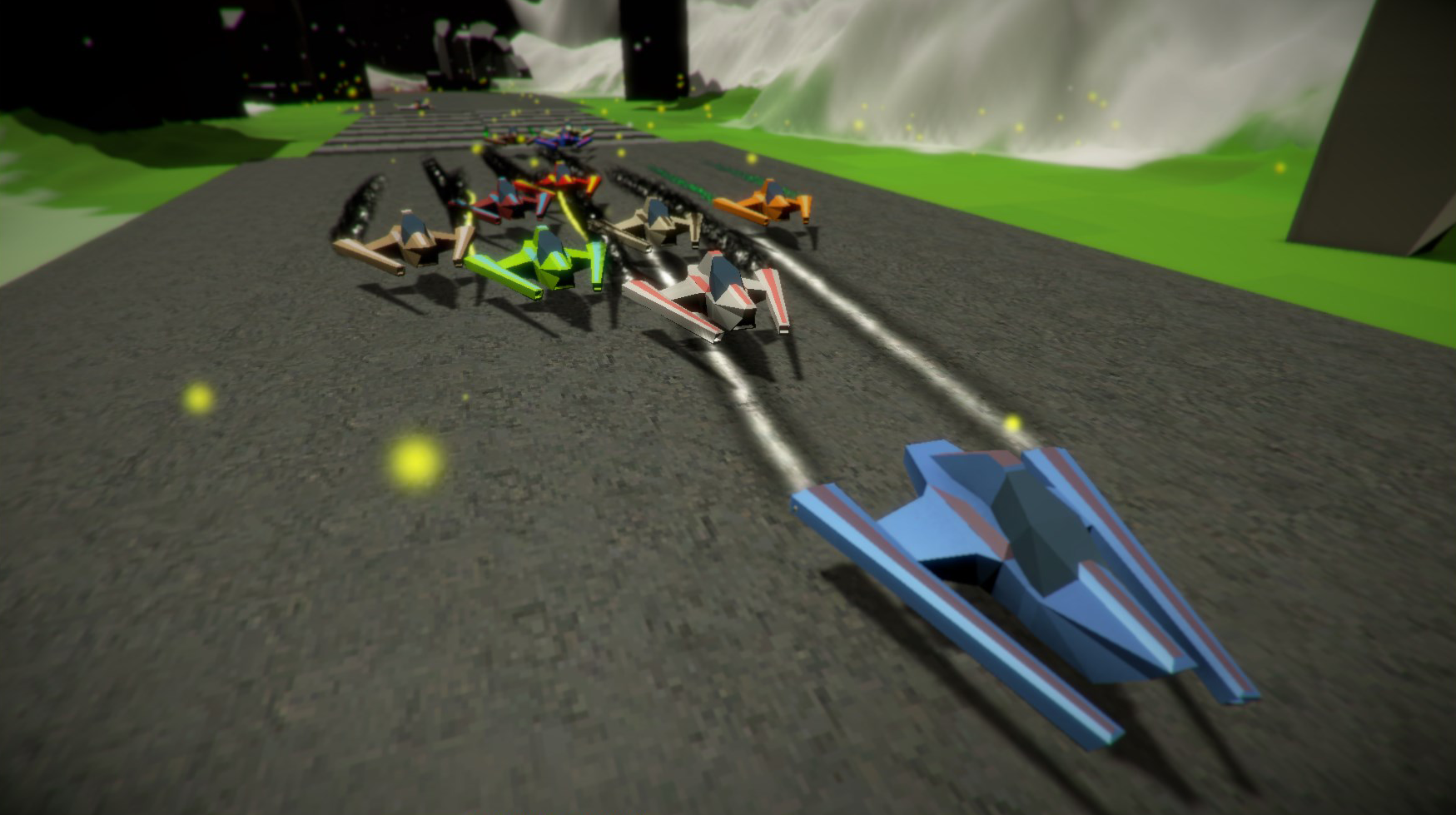 This is the first step toward new spaceships for the game. As you well know, the first one always takes the most time and effort, but as my 3D skills improves and more and more ship parts are created, more and more spaceship will come online.

We're still concepting and revamping all the spaceships designs with the new 3D modeling in mind with Yuubae. Until we have locked up all designs, I still have to finish the main menu and have to start one final circuit to play seriously on, along with the last part of the Health System 2.0, aka damages states.

We're nearer the Alpha 2.0 each week, so bear with me!

Also, special shoutout to the /r/NintendoSwitch subreddit for the nice feedback and comments about this project. I wouldn't have dreamed for so much positiveness from randoms on the internet and that really warmed my heart!

So thank you all for reading my posts and following this project. Don't forget you can join our discord channel and follow us on twitter!

The HUD got an update, and the Health System 2.0 is finally done! Also: VIDEO!

Today I'll show you the progress on the new Equipment System 2.0, coming up with new gameplay changing objects.

This is a quick update on the 2D to 3D architecture translation.

Small presentation of the main circuit scheduled for Alpha 2.0 and small announcement about the architecture of Wheelless.

Wow! This game looks awesome! I love the style and the fresh ideas for such a sci fi racer!