DIALOGUE SYSTEM UPDATE AND NEW DEMO - Luckless Seven is the story of Mark Vesco’s journey from a listless existence to competitive glory. Blending a fast-paced card battle system with conversations and stories that respond to your choices, we offer one of the first card games with a story exciting enough to match it. Ready to play?

Absolutely Massive Dialogue UI Upgrade! Now in dialogs, players can hover and click the words or the hexagon buttons. More on this below.

Wow, it’s been an absolutely hectic week! In case you missed it, we’ve recently launched Luckless Seven on itch.io and Gamejolt, created a new Discord server, published one of our biggest blog posts yet (so big that we had to split it up into multiple parts!), as well as released a massive update to the public demo build. Thank you so much for the wonderful response we’ve gotten on our new platforms!

If you haven't done so already, Follow and Wishlist Luckless Seven on Steam!

Ekosi last time got a big upgrade with the transparent card indicator to let you know if the opponent is going for another green card or standing.

We’ve been meaning to put the game on itch.io and Gamejolt for the longest time. We wanted the launch to coincide with a big update to the game, so we held off until we were ready to showcase everything we’ve been working on for the past several months. Good things come to those who wait, but we want to deliver a little bit faster going forward. 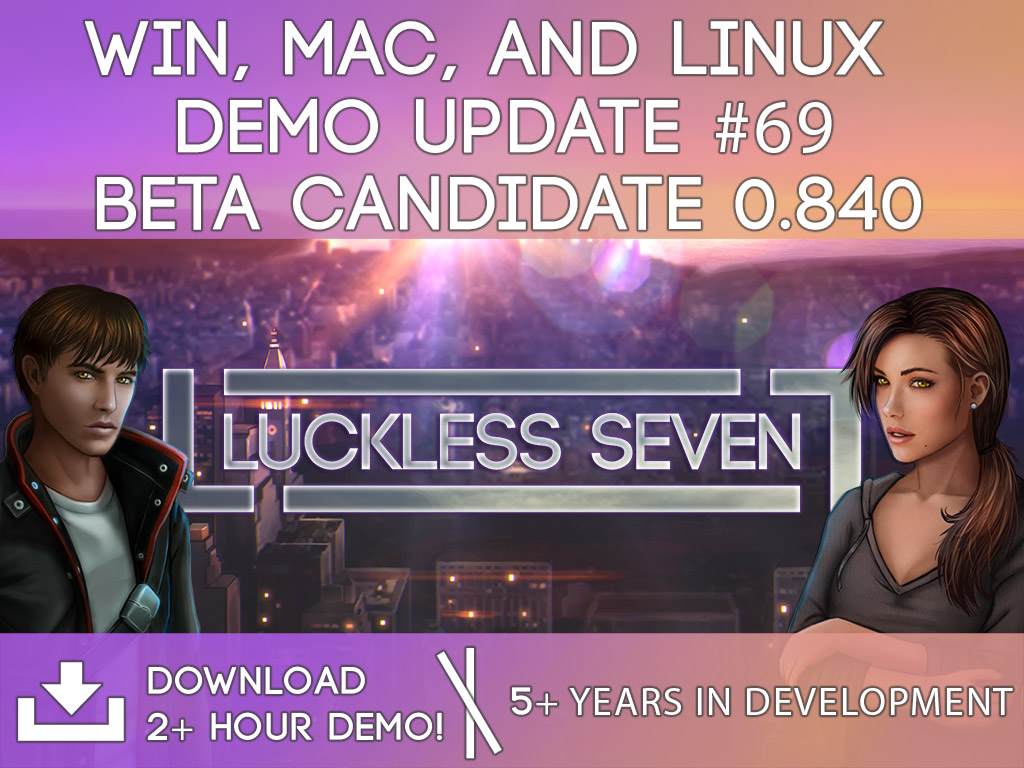 New Demo with many many bug fixes and a giant UI upgrade to the dialogue system. This approximately 2.5-8 hour demo can be downloaded and played on Steam, IndieDB, GameJolt, and Itch.io! For Windows 32-bit & 64-bit, MacOSX (Universal), and Linux (Universal).

Speaking of good things, we’re very happy to showcase a quality-of-life change that almost everyone has been asking for the past few years. Yes, that’s right! You can now click on the text button directly -- not just the colored hexagon -- to select a dialogue option. This was a change we wanted to make for a long time, but we knew it was going to be very time-consuming due to the way our dialogue system was built. Play this earth-shattering change in our newly released demo build!

Hover over different dialogue choices. Choices affect the outcome of quests, how much people like you, and ultimately the story.

We’re also including a heap of smaller quality of life changes in the next demo build. Over on the itch.io subreddit, u/nestedradical gave us some great suggestions including the recommendation to slow down the text speed. Message received, and we plan to add a variable speed slider in the near future. Then, we recently received some fantastic suggestions on our Discord server from @MegaMan regarding Arcade Mode: buggy AI, grammar fixes, and more. (Thanks, James!) Most feedback we receive is on Story Mode, so this was especially helpful input. If you have any questions or just want to chat, be sure to join the conversation there.

Working on the Sunset Water for Neropolis City. Accidentally made a river of some tasty Kool-Aid.

Here is the Sunset Water for Neropolis City with a little less red.

Last but certainly not least, we have a new Victory Theme from our composer Brandon Ledbetter! He’s been cranking new songs out at a blazing pace, so if you haven’t checked him out recently, there are probably several songs you need to catch up on.

Our blog posts are usually super gigantic, but we actually get a lot of feedback to make them smaller. And we agree! So, we’ll be splitting them up and making them much more frequent. Expect to hear from us again soon!

Join our mailing list to stay up-to-date! We will send out emails once a month with a summary of our weekly devlogs.

I’ll see you next time,