About one month has passed since the preview post I made on the 8th of May - and I am really sorry for all delays. Now the big update I announced back then is finally online - and comes with awesome new features! In this article I want to show you the newly added Main Menu system and the Skirmish menu - which finally works so far -, the AI assistance called AIA, Shield Effects as well as introducing the Pandora Forces support unit to the game and, most importantly, new gameplay mechanics provided by the cloaking system.


Sure this not something to celebrate, but still I wanted to leave a few words on it. First of all, I wanted to make a video blog about the interface instead of hitting you with a wall of text, yet I failed because I realized I am horrible at speaking freely in english. So to move on: the Menu system is not complete, but can now navigate to the skirmish menu with just 2 clicks and setup a Skirmish game like you are used to in other RTS games. 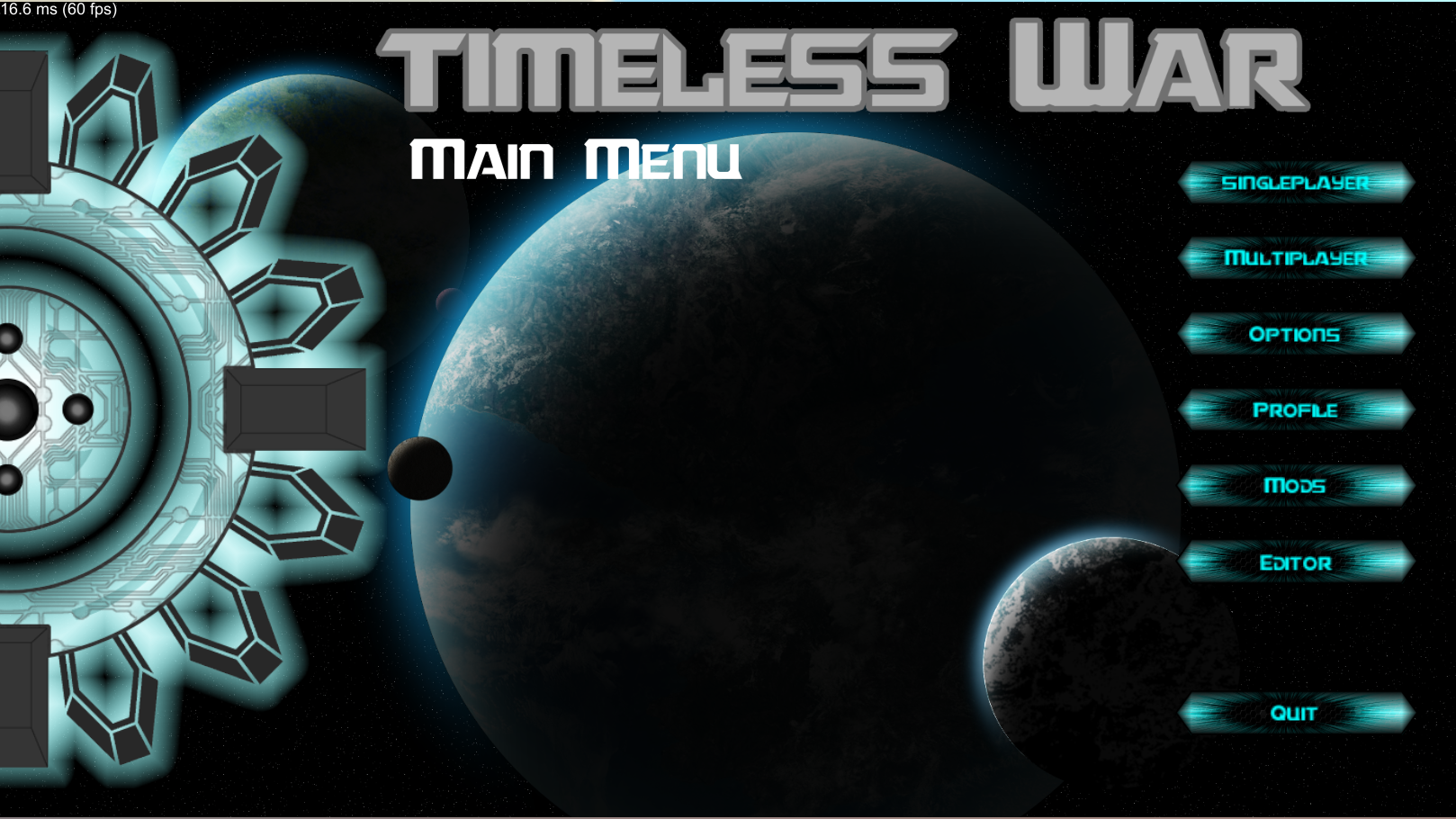 The static background image is just a placeholder. It will be replaced with ingame sequences you know from C&C Generals. On the left you find the randomized faction logo (on the screenshot above its the one from the Pandora Forces). On the right side you find all the menu buttons.
"Editor", "Mods", "Profile", "Options and "Multiplayer" are non-functional right now, but they will be extended later. "Singleplayer" leads to the Singleplayer menu with the button for the Skirmish Menu.

The Skirmish Menu allows you to easily adjust a singleplayer match with AI allies / opponents as you like. For now there is only 1 gamemode and 1 map available, with limited settings. Also after all this I didn't have the time to create more Commanders, so there is only Ragnarok for all factions. I promise to bring more once I have more time to create new models and stuff.

The only skirmish map you can play for now is my former "Asgardian Hills" map. I decorated it with trees and rocks, swapped a few textures and shaders and I also placed 4 Mineral Fields in the center.


Support units are an essential part of Timeless Wars gameplay. They boost allied and your own units attributes like Attack Damage, Rate-of-Fire, Speed and much more. In case of the Kubus, the resilience of nearby allies is increased.

The Kubus emits a shield to all units in close proximity: 50% of the units health will be added, while it regenerates. Currently the Kubus allows you to tank 100 DPS of damage which is roundabout the damage output of a standard infantry unit. However this buff can have a massive impact on a battles outcome. Even if you are outnumbered, the right use of the Kubus will ensure your victory. At least if the enemy isn't smart enough to destroy it first which is the case for the AI right now... I will work on that. After all, I promised a challenging AI and I want to keep it. ;)

Besides, the shield effects are just for show even though I personally like how projectiles crash on it with an awesome sound while it glows as result of the impact. Once the options menu is available, you can turn that effect on or off any time in the graphic settings.


AIA, the most important feature if you are controlling your Commander directly, just want to watch AI-Only players tare each others apart or just an RTS noob like me. :P AIA is like a regular AI player - thats why you can set the difficult level for the player in Skirmish Menu -, but you can always turn it on / off during the game and always make your own decisions: you can control your commander, build and control units and order AIA to do whatever you want. Ok, the latter is not available yet, but it will be once a working Chat-System is implemented.

At the moment, only a fat line of text in the bottom center of the screen indicates that AIA is active. Later it will be replaced with a small button in the command bar that can also (de)active AIA.


Unlike most RTS Timeless War has no Fog-of-War (FOW) system, despite what I said on previous updates. I had one before, but it didn't felt right. I mean you can see thousands of meters into the far, but the terrain infront of your nose is unknown? Also how does FOW fit with high-tech factions that are letting Gods look like amateurs? However, removing FOW without a proper replacement would leave almost no room for sneak attacks if the player can always see what you are doing.

Since I wanted to implement a cloaking system anyway, I figured that this could be the solution to this dilemma, while integrating level objects to the gameplay. The premiss: EVERY unit can cloak!

How does it work? Once a unit like the Striker tank is close to props - like trees, bushes, rocks, rubble, trash, wrecks ect. - an attribute determines whether if and how fast a unit can enter cloaking increases. Small units can cloak even if they are hidden in a bush, larger units like Ragnarok or aircrafts need a much larger value until they are invisble to your enemies. The size of the unit also decides what decloak condition a unit has. Infantry for example will only be decloaked when they fire their weapons. Most vehicles on the other hand already decloak when they move and have longer timers in general. Most structures cannot hide themselves, but there is an exception. More on that later. ;)

With this gameplay mechanic cloaking becomes a really powerful tool and the right use of the terrain can change the outcome of a battle drastically. To counter it I decided that all units can detect cloaked units as well by using an attribute called "Perception". The perception attribute allows you to see hidden enemies. Commanders and Turrets usually have a high perception range, but will be scouting units and sensor arrays specialized in finding cloaked units on a large distance.

Just a side note: There is a method I call Remote-Cloaking. Technically it is already in the game, but I had no time to configure and test a Stealth Generator, so I leave it for one of the next update.


For the next update I planned to overhaul the animation system. It currently is way to complex and performance intense. Also I want to implement more units and structures for humans, Asen and Pandoras as well as finishing the CFA Dropship. In short: I will hammer up increase the Eye-Candy factor. :3 You may can expect victory conditions so you are able to win a match whether its against bots or humans.

Finally all important points are done, so lets finish with the changelog. Just click on the following LINK. The next build will be online within a few days, because I have a few things that still need some work and I want to deliver you a product of high quality.

Thank you guys for reading and I hope you like the new features. Stay tuned!

Thanks. It was alot of work as well, but Im glad that its done now so I can soley focus on finding and eliminating bugs before the next release. :)