Welcome back to another log entry of Demox! Today I’m going to talk about the work I’ve done for water interaction.

My previous projects have contained water however, I’ve never put any effort into making it behave like water would. In LBKR for instance the water was purely a decoration, it would not react to objects colliding with it’s surface nor would said objects be manipulated by the water in any way- this made it feel very artificial and, in lack of a better word, un-watery… ( Please excuse my word-slaughtering, keep in mind that english is not my native language ;P )

For Demox I aim to make the water less of an illusion, and have it actually react to collisions and affect objects that enter the ”water volume”. This actually involves multiple object behaviours considering the code, and a whole lot of different particle effects among other things.

So what did I actually want to happend when something collides with the water? That depends on what type of object actually hit the water of course, but let’s have a look at the goals I had set in mind.

Starting with the water volume itself, there were some important properties to keep in mind. For starters, the depth of the volume which is required to determine what ripple effect to use, small water puddles would for obvious reasons create smaller splashes than if an object fell into a large pond or river. I simply set this property to be the height of the water volumes bounds, and then adjust the volume size in the editor to fit the terrain or water container.
The next property required is the world position along the y-axis that the volume’s surface is located at, this is required when calculating the depth of the volume at a specific location. (Which is done to determine current speed penalty for avatars moving in the volume.)

As you can see I simply determine the penalty by calculating how far along the way to the bottom of the volume the avatar has reached. Since this return a value in the range from 0 to 1 I also multiply it by a constant value ”DepthDragMultiplier”, in order to get a value suitable for actual speed reduction.

As can be seen in the code, the depth will also determine what type of water ripple effects to play while the avatar is moving around. This also ensures that the correct effect is played if the terrain under the water is sloped and the character is moving from deep to shallow waters or vice verca.

For ripple and water trail effects there are constant depth values as limits of when to select each type of effect, and each effect has three base variations. There are more variations aswell but for other purposes, such as larger objects or projectiles hitting the surface etc. 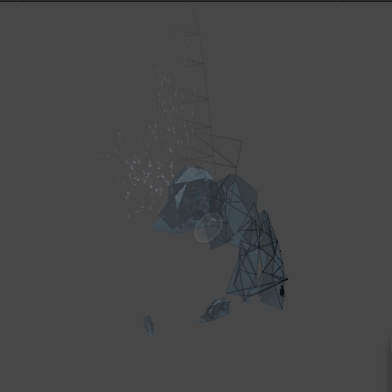 What impact / splash effect to use when a collision with the surface occur is determined within the water volume’s code, unlike the ripple effects as described above. It’s a really simple setup of checking the tag of the object hitting the surface, for now this works nice since most objects with the same tag are of similar sizes (ie. characters, items, etc). I already know now that some monsters will be alot larger than average though so in the near future I’ll need to adjust this to scale the splash effect to look good if the large monsters fall in the water aswell.

One of the most important things in my own opinion are that bodies and some objects should float in water, as they do in reality. I don’t think I’ll go into detail of exactly how this is done since I’m quite certain there are a whole lot of information to gather on the subject out there in Google-land, but to cover some basics- everything that floats will require multiple properties to determine their behaviour in water. 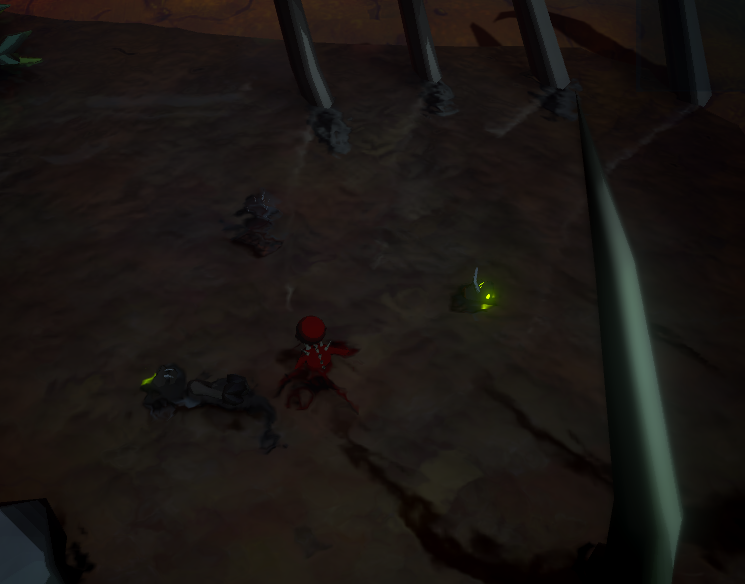 First, the buoyancy of the object, how well does it float in water?
Each object also required values to limit their movement in the water volume, my first iteration of the floating behaviour had the objects jump out of the water over and over again, as if displaying their acrobatic grace- to adress this issue I added two limiters / thresholds. ”Float Pivot”, and ”Surface Range”, the float pivot is a Vector3 that describes a point relative to the object’s position that symbolizes the most buoyant part, eg. objects that contain air compartments tend to be most buoyant in the compartment where the air is located. The surface range will be used to compare how much beneath or above the surface the object is and adapt force applied in an appropriate manner.

I also added a property of ”water drag”, this property is modified by the current submergence of the object and the end product will be used to manipulate the power of the force or gravity applied to the Rigidbody of the object, objects in water usually have alot more velocity if floating up from the bottom but when at the surface the velocity is no longer as agressive- this was the behaviour that I intended to simulate with the help of this property.

Additionally, a reference to the water volume affecting the object was also required since the depth at the object’s position is compared alot.

While creating effects for the water system, one of the assets created was a waterfall- it looked really stupid though to have a waterfall but when looking at the source, or volume from which the water came from there was no movement. For obvious reasons I decided to create some assets for moving water. This could be achieved by writing a shader to handle I guess, but for example, rivers or streams can often bend and turn alot, and I don’t know how to make a really adaptable shader for this so I decided to try using particle systems for the moving water instead. I’ve only created a prototype effect this far but I like the result, with some more experimenting it could turn out quite nice I believe.

Bodies and objects beeing swept away by a river, using ‘Constant Force‘-triggers

The particles are rendered as simple 3D meshes instead of 2D billboards, and currently use Unity’s refractive water material. As I liked the style of this effect I modified all other water effects to use a similar technique. 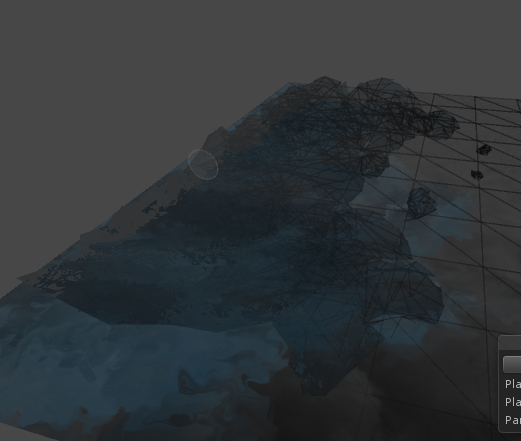 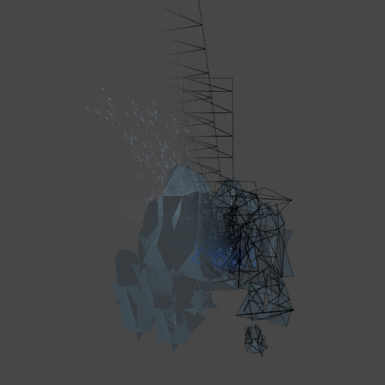 But back on track, the moving water presented an obstacle that I hadn’t thought of, objects floating in the water volume would not follow the water flow, but instead just float near the same position. This was easily fixed though by creating triggers that apply constant force to objects within it’s bounds if those objects are in a floating state, and then positioning those triggers along the water’s path.

Example of the ConstantForce script can be seen below: 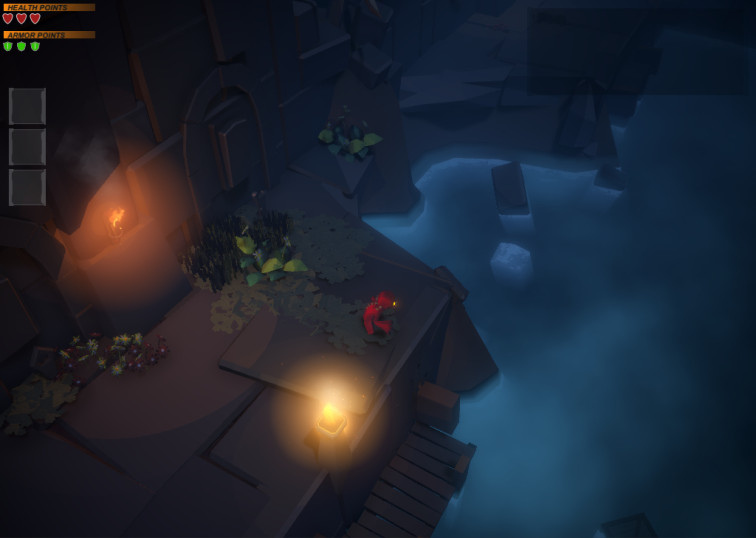 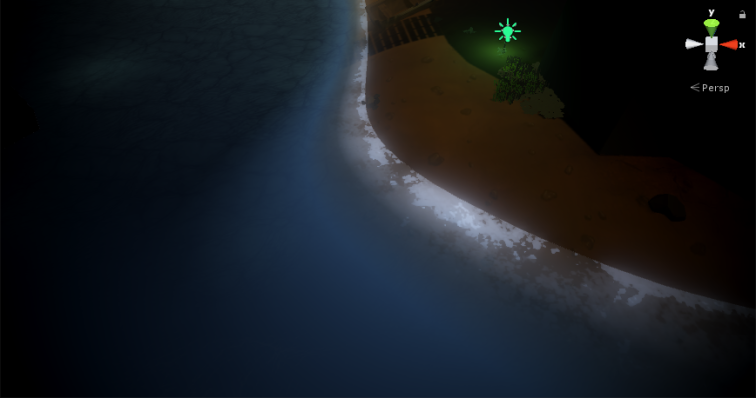 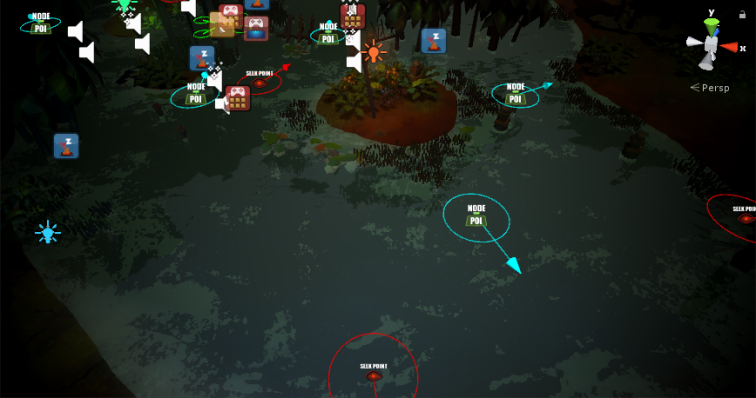 Among the final touches for the water interactions I made it possible for characters to swim in deep water, I were able to make use of alot of the code I had already written for the other aspects concerning water interaction behaviour, only some minor adjustments and tweaks had to be made to implement it for the character classes. I did consider some possible obstacles before putting it all together though.

The first obstacle was easy (actually, all obstacles were easy to solve…) to sort out by using a similar technique to what I did for retrieving FX as included in a code snippet earlier in this post.

If the avatar is a defined distance beneath the surface I can thereby either flag the avatar as swimming, or if not able to swim have the avatar drown from within the if() block.

To stop the player from swimming into infinity, or reaching areas far away that were not intended to reach I added a stamina vital to the player character’s statistics. While swimming the stamina will drain and when out of stamina the avatar will drown. This obviously help when limiting the player’s swim range.

Since the avatar is not allowed to jump when swimming, it was critical to find a way to leave water volumes if there were no ramps or shallow water within the volume that would allow the avatar to start walking on the bottom of the water volume.
I’m making use of the code for mounting obstacles while not in water, by casting a ray in front of the player I can detect if there are any climbable geometry, and if so allow the player to mount said geometry and leave the volume by climbing.

An obstacle I had not anticipated were with floating platforms, as the player jumped or climbed on them they would not make any motion at all, this made it look like they were actually static objects just positioned above a water volume. I weren’t satisfied with this.

By the way, since I'm also posting these logs to describe to other developers who read my website or twitter you might've noticed that I add alot of nonsense and code-excerpts about the game, and perhaps geeking a bit too much about how certain aspects have been developed and designed. Is this appreciated by you as a reader or should I strip this content and stick to less developer-geeky information about my progress? Let me know what you think by dropping a comment! :)

And to end this lengthy article, feel free to follow me on Twitter @CrumblinGames, if you feel that the time between my updates here on IndieDB are too long I do post more images, videos and smaller info regarding the development on Twitter!

-One question boys, if this happens in one step all, or we are all dead.

I'm sorry, I don't quite understand what you're saying. What's your question?

I mean "switch" command is better then "if", gives performance boost if widen in several steps. At end you will get highly optimized game as result.

That's true, although with todays computers the difference between if and switch is quite negligible, especially for small cases. Profiling to make a comparison between the two methods show that making an if-elseif-else block with 50 cases vs a switch block with 50 cases saves about 0.1ms. It's faster but this is often a micro-optimization, it's better to focus optimizations where it's actually needed.
I usually use switch when I have 4 or more cases as it becomes easier to manage or when I involve cpu-heavy operations in the cases, otherwise I use if-blocks. I find <=3 cased switch blocks bulky and makes the code hard to read. :)