In which aesthetic work continues; the game's to-do list is attended to; some tutorialisation is addressed; the jigsaw minigame gets an internal reworking; the jigsaw minigame's accessibility option is changed; and the environment, logic, and writing for level four is (hopefully) complete.

This week's screenshot shows a change in the functionality of the "jigsaw" minigame, as depicted in its editor: 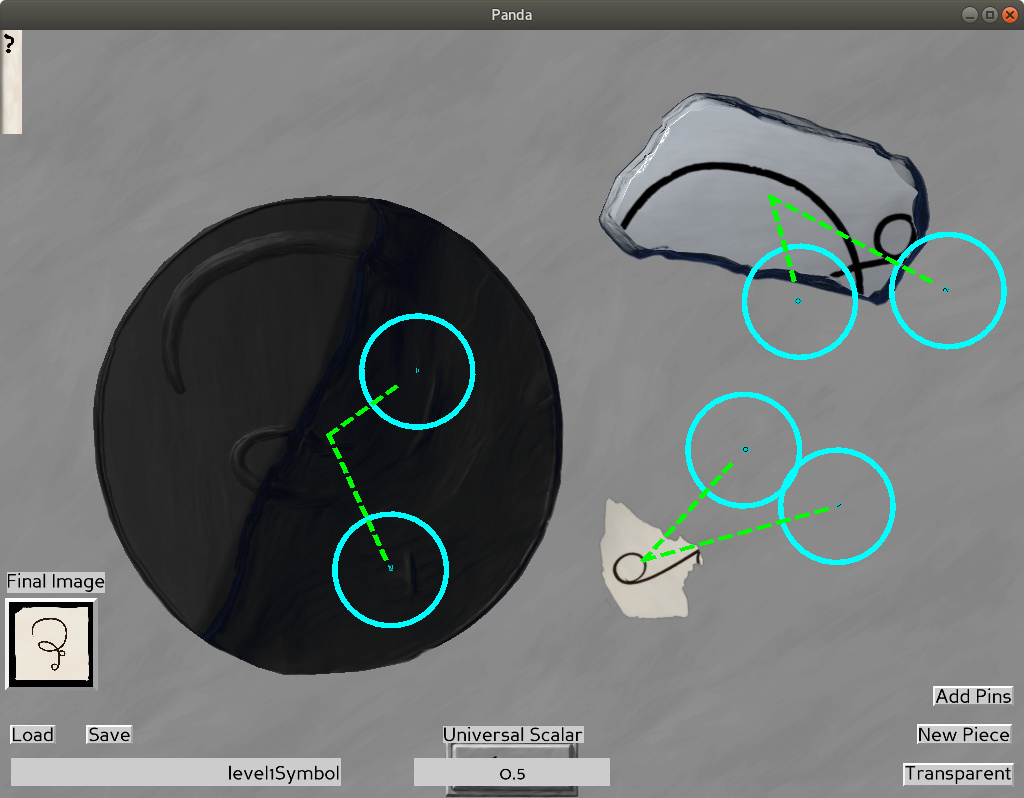 The week just past was primarily a week of addressing issues:

As I've described in recent blog-posts, I believe, of late I've been doing a lot of work on the aesthetics of the game. And indeed, that did continue in the week just past.

However, I've also had a number of issues extending my to-do list, many of them points raised in feedback on the demo. And, perhaps with my desire to move forward with the game, having so extensive a list seemed to have become a stressor for me.

So, in the week just past, I determined to clear out my list somewhat. A few issues were triaged away, moved to various sub-lists that are intended either for some later point or as "nice-to-have" features. But many were attended to directly.

And indeed, I've managed to significantly reduce my to-do list, and I think that I do feel the better for it!

Most of the things done are likely not worth covering in detail: a fix (I hope) to a culling issue; touch-ups to the tunnel in the barrow-tomb; some reworking of the new enemy's death-animation; and so on.

First is the matter of tutorialisation.

The general question of tutorialisation is one that I still haven't answered: at least some feedback has indicated problems with my current implementation, but I don't yet see a way of improving it that I find palatable.

However, there is one element of tutorialisation that I do have at least an answer for--testing may tell whether it's a good answer, of course.

That element is the issue of tutorialising the minigames.

Thus far, the minigames have been tutorialised via a scroll at the top-left, that can be opened to find detailed information on how to interact with the minigame. However, these scrolls, being detailed, are somewhat text-heavy--perhaps even for A Door to the Mists.

In the week just past, then, the idea came to me to introduce players to the minigames through briefer, less-detailed "quick-start" instructions. The more-detailed scrolls would be retained for a deeper description, but now as optional instruction.

I initially wanted these "quick-start" instructions to not block play--but I realised that some of the minigames seemed to use too much screen-space for that to be likely feasible. So, alas, they're dialogue boxes.

Each gives very basic instruction on the minigame's goal and interaction--just a few sentences each. I'm hoping that players will be more inclined to read these than with the longer instructions, and so will gain at least some guidance on how to play.

Here are the new popups: 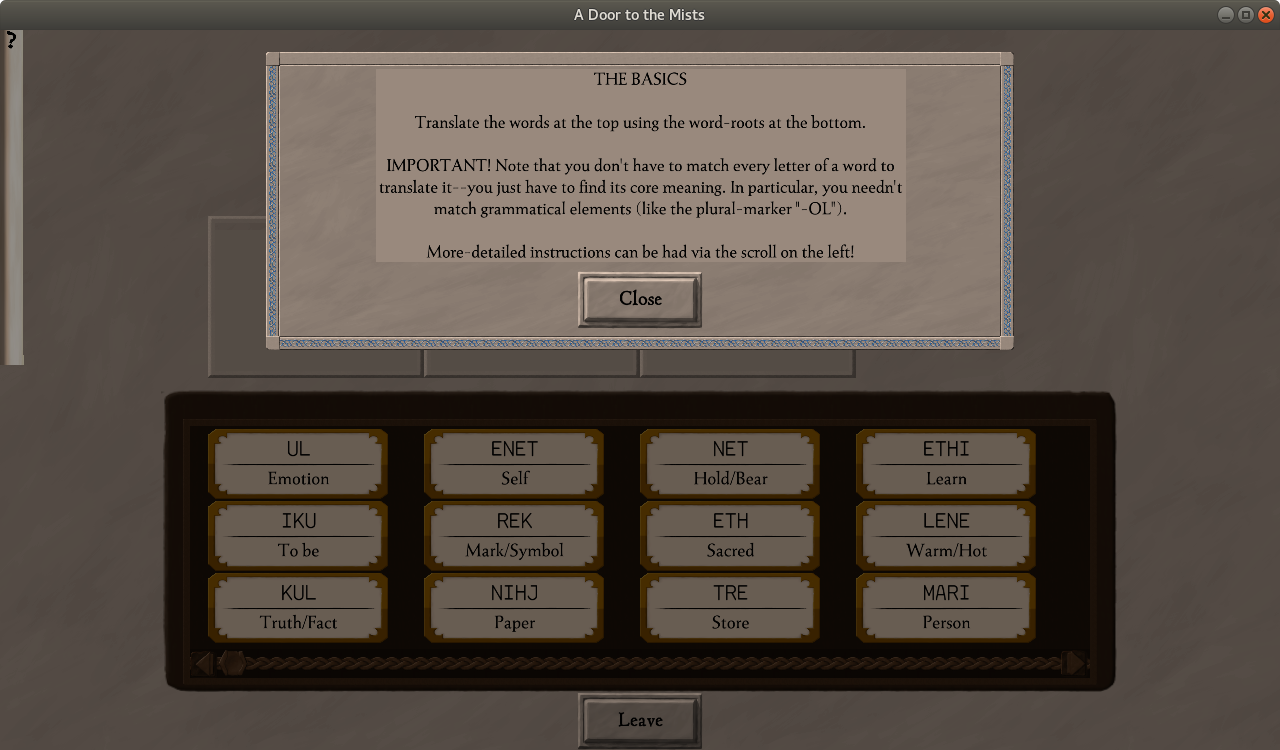 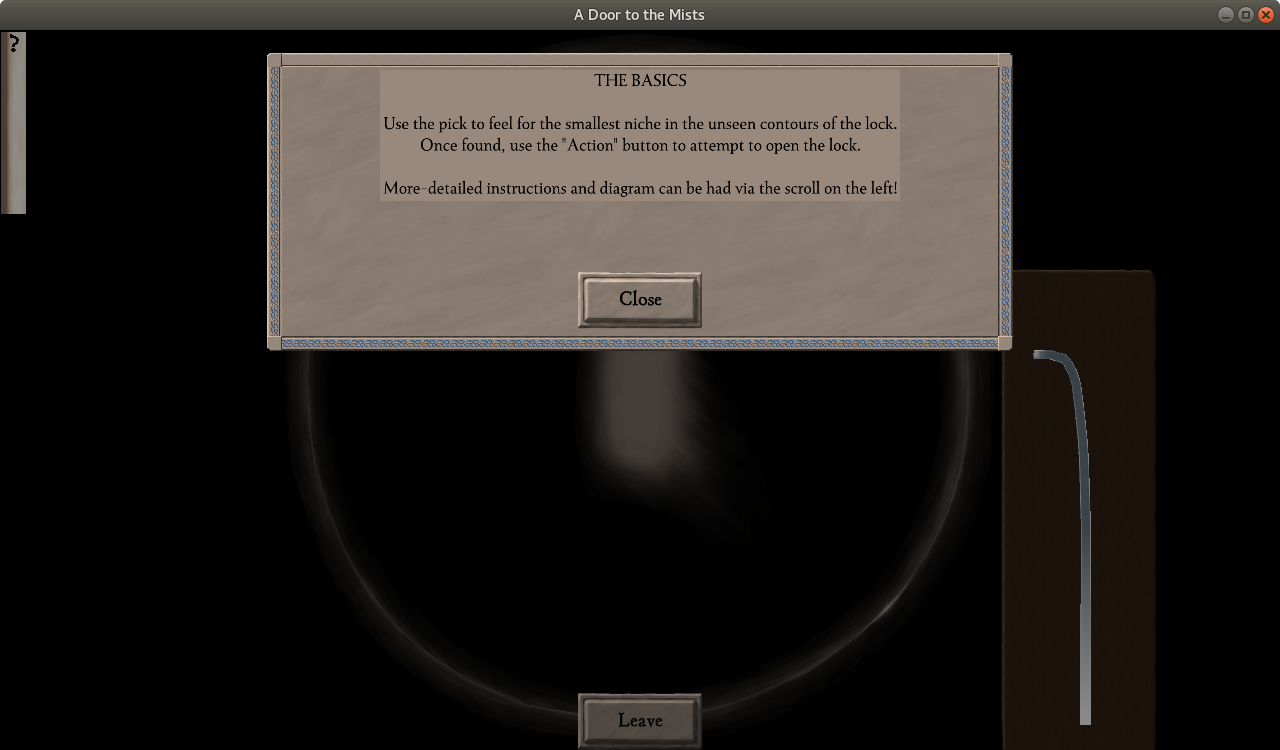 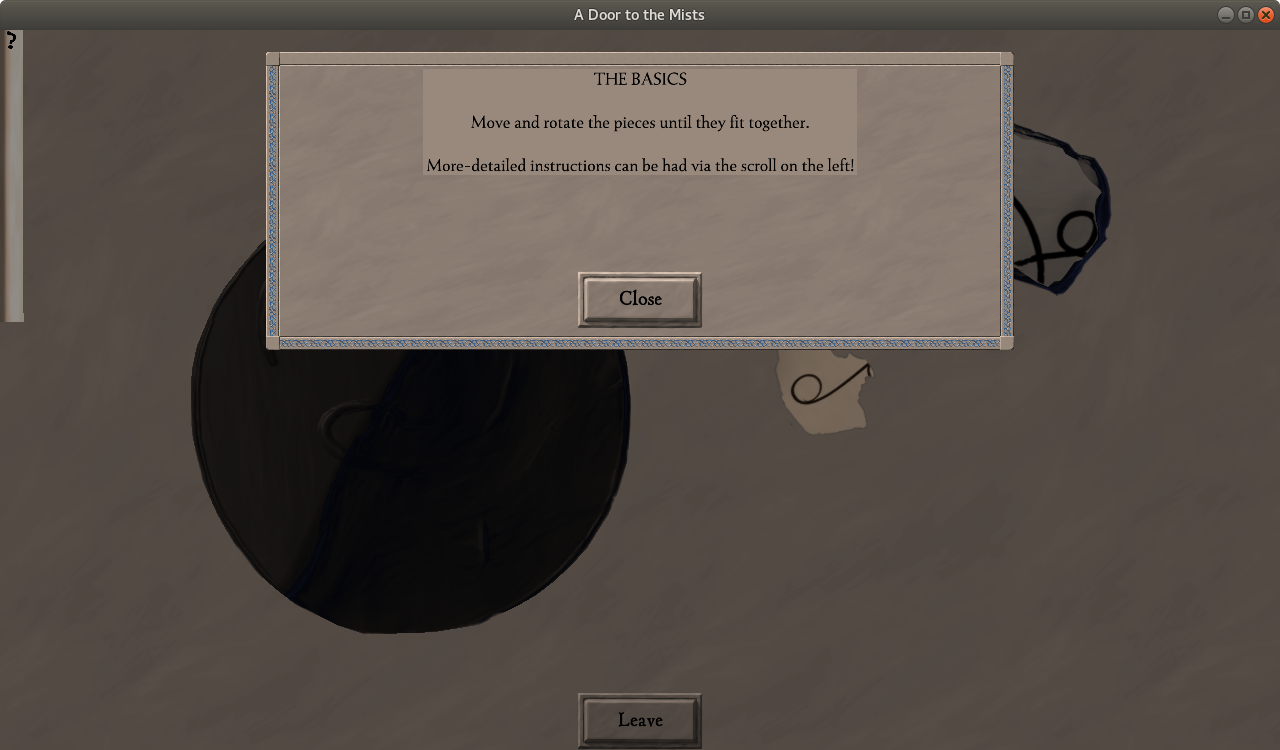 Sticking with minigames, the second matter is that of the jigsaw puzzle minigame, as shown in the first screenshot of this post.

I've had feedback that this puzzle is a bit over-finicky about what constitutes a correct arrangement of the pieces. And indeed, I think that I agree: it was a bit particular.

So, in the week just past I reworked its method of determining whether a piece is correctly placed.

Instead of using offset points on each piece (which I called "pins") that have to match positions with their counterparts, pieces now have "neighbour pieces", and positions relative to themselves at which they expect their neighbours' origins to be located. Furthermore, the further apart the origins of two pieces are, the more leeway the puzzle gives in their relative positioning.

I'm hopeful that this will prove a little more forgiving!

This new mechanism does, however, remove the basis that had served for the jigsaw puzzle's accessibility option. Thus I've replaced that option: instead of adding guide-points, it now simplifies things by removing piece-rotation from the minigame (and then giving all pieces in their correct orientations from the start, of course).

And finally, I finished off (I think, at least!) work on level four (aside from certain matters regarding the enemy found there). The level now has a finished sledgehammer and sleeping-bag, as well as relevant logic for the items found there, and the related writing. 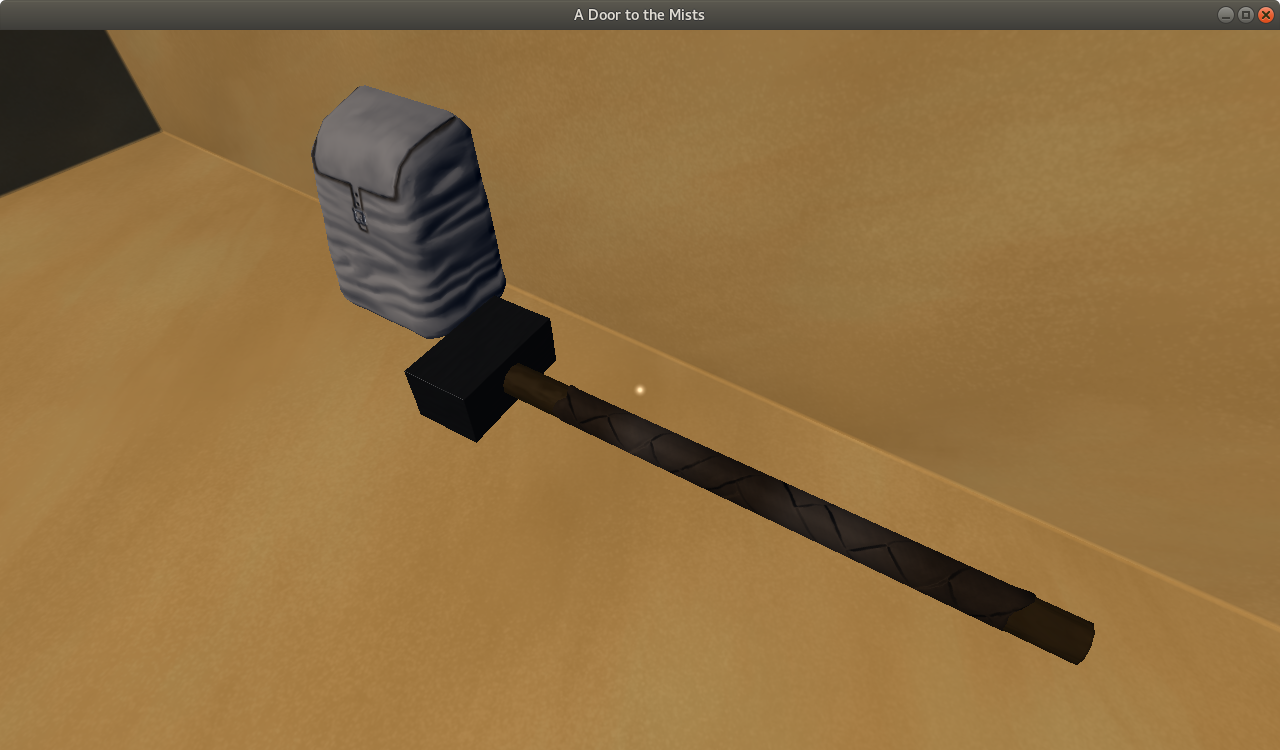 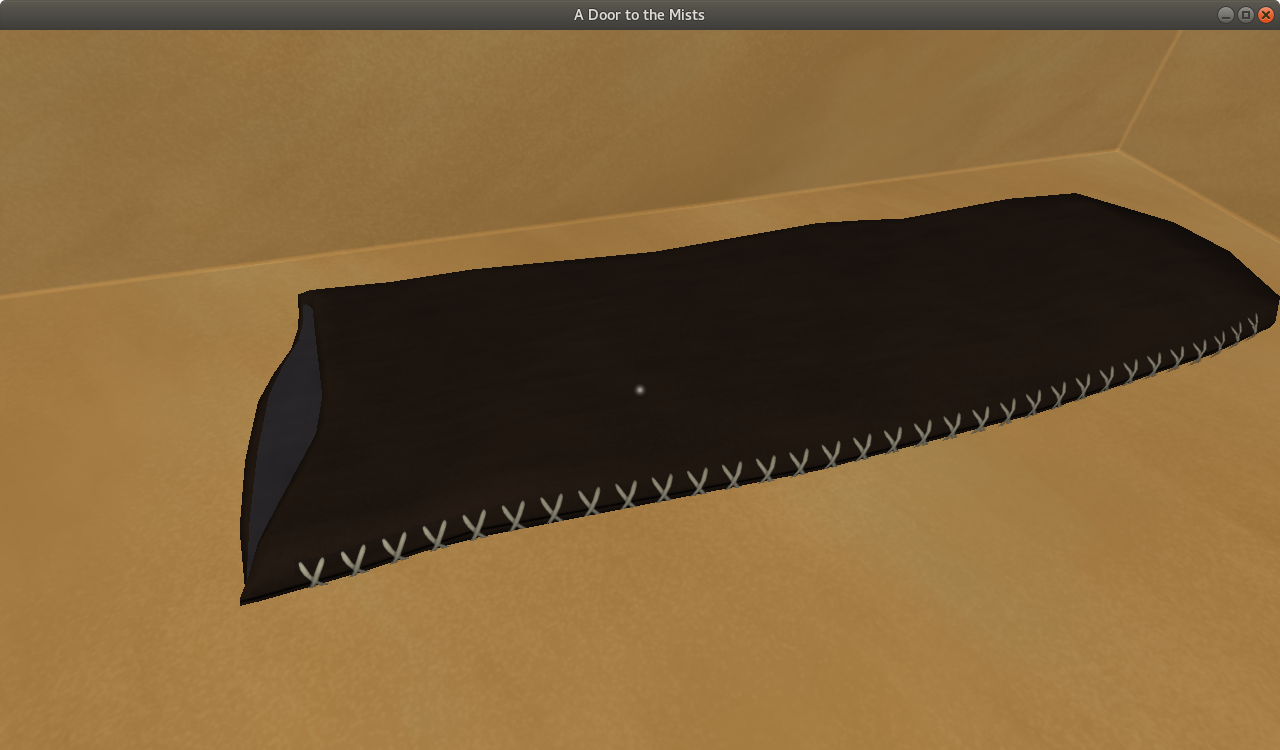