Lots and lots of visual updates and some gameplay polish.

TL;DR - I'm putting much effort into polishing the game. It may seem somewhat chaotic in these article but i follow the overall dev plan i have.

Some people told be that it would be awesome if dying player will be knocked back a bit. I think that's a good idea so i've implemented that.

Coming up next - enemies knocked back by a charged bash now break thru glass in a correct way. It was working in the prototype stage, but was bugged out later. Now it back on.

Broken cars and street junk got a facelift to fit the art style. All those papers and tin on the floor are something that noone will pay attention to, but it's important for the look and feel of the game. 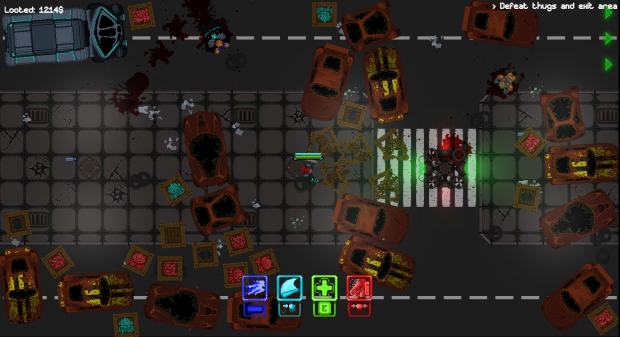 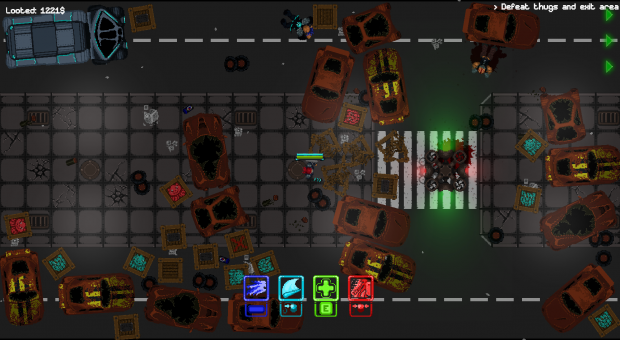 Another screenshot of the updated cars, to check. 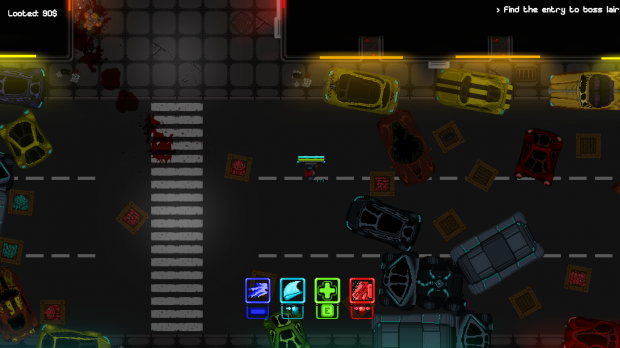 For a more cyberpunk look i am giving a try to neon ads banners placed on the streets. It's still wip and doesn't look as good as it should be, but anyways, take a look.

Conditioners on the walls are updated aswell. The animation was a bit buggy on the first try) It's already fixed, but it looked fun enough to share:

Musicbox is remade, now with animation to draw attention. It's a mission objective, so it should be visible at all times. The sound waves are synchronized with animation.

It was a busy month for me. Apart from lots of tweaks to the game i got a job change quitting my previous office and finding a new one. It sure helps to keep my bills paid and my family afloat, but it was sort of daunting to get through. Thing are brighten up a bit now and i keep moving ahead.

Howdy, this game looks great. The combat looks like it's going to be fun, that should be your focus, since I assume it's what the player will be doing a lot of, hopefully! But knocking people through things, is just so much fun and makes you feel like a real badbutt. lol

I like that you shared the goofy air conditioner animation, :D that made me laugh.

Guess my only nit pick would be the screen that has a lot of junked cars in it. They all seem like the same model. I noticed in the image below there where some different models, that's give it some good variance, of course if you're nailing people throughout who cares...lol :D

Are you working on this project alone?

Thank you for the kind words :D

I'm putting lots of effort into combat gameplay and cyberpunk~ish atmosphere. As for junked cars - well i have limits of possible resources, please bear with me :)

I'm doing the code stuff, tweeting and posting articles here on IndieDB. My mate is working on art. We are doing it off hours, after full time work days.

I feel ya, ya bro. I figured it’s something you already noticed, hopefully I didn’t come across as disrespectful. Here’s to finishing games!! 🍺

Wow! I stopped at the cat post and you've made a lot of new ones (posts)! Congrats mate!

Thank you a lot for following me this far mate! Glad to hear from you!
Lots of stuff happened - i've lost an artist, found a new one, visited DevGAMM conference in Belarus.. That's to scratch the surface :)
I am updating the visuals and adding shiny new gameplay features for several months now :)

Oouhh! Yeah I read about the artist lost post. I actually read every one of your post from when I stopped (At the cat post) and it's really nice! Good luck for the future man!

Also, when can we play the latest demo? The demo on indiedb is outdated from your updated things and features.

Thank you mate :)
About the demo - in fact, I'm now working entirely on the new demo. Hopefully i will summ up an article on first boss update soon, then (maybe in a month) i will make a new demo version and upload it here.
Demo will have (i mean stuff already developed and in game) updated art, some new gameplay features, and updated boss battle.