In which level-geometry sees touch-ups and fixes; a superfluous tomb-chamber is sealed off; a crown is worked on; logic for taking and replacing said crown is implemented; a mural is begun; some text-strings are written; one more pitch is made; and an engine-tutorial is updated.

This week's screenshot shows the half-crown that rests with the king entombed in level eight. 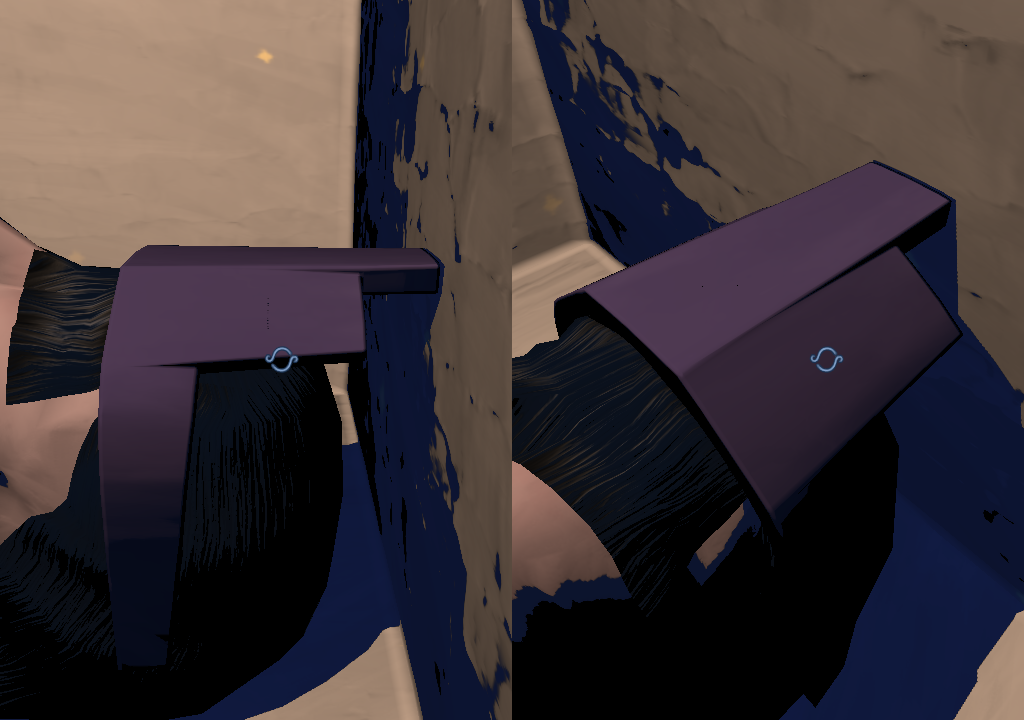 The week just past was perhaps a bit of a short one, in part likely due to both a personal issue and some disruption from minor changes being made to the building in which I live. Still, some things did get done!

To start with, a few changes were made to the geometry of level eight.

On the perhaps-less-notable side, I enacted some touch-ups to the cleft between the tombs, including some improvements to its shadow-casting via hidden "interior walls".

I also performed some minor cleanup of various bits of geometry-parentage and drawing-order, and deleted some superfluously-duplicated objects.

On the perhaps-more-significant side, I sealed off the second king's chamber, the one that would theoretically be found in the second tomb. While this blockage is not canonical to the story, so blocking allows me to omit a figure that's not really relevant to the level, and avoid the potential issue of having a second crown be available. 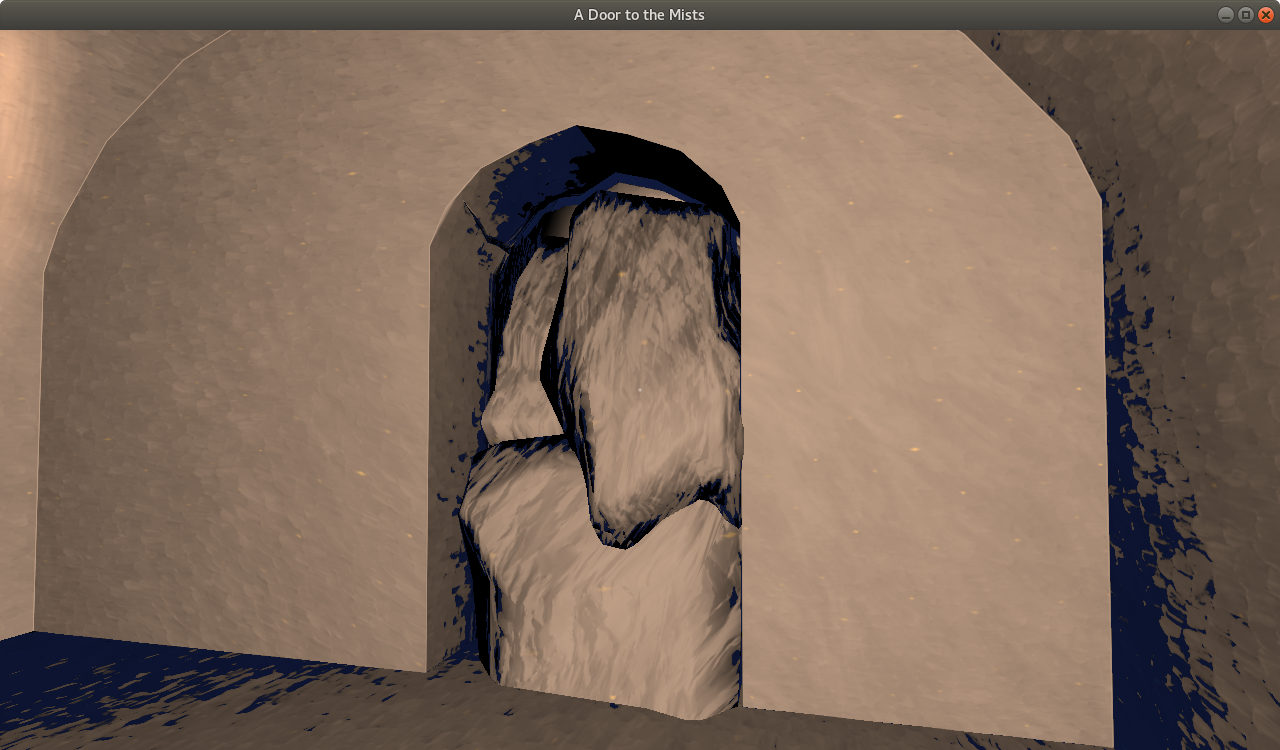 Returning to the first tomb, and as shown in the main screenshot above, in the week just past I polished off the model for the king's half-crown, or at least this draft of it. This includes the addition of a pair of inscriptions on its inside face. 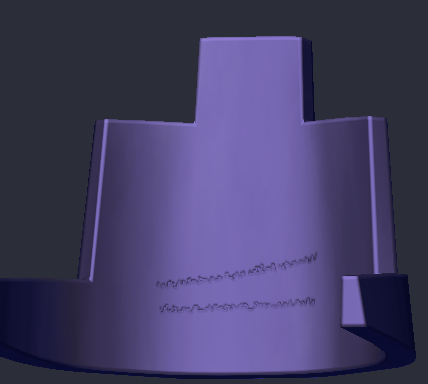 Now, said crown is interactive--it can be taken by the player. Furthermore, it can be put back, and taken again, and so on.

There is, however, no built-in logic for the purpose of having the player put down an object; for the most part objects in A Door to the Mists are picked up, possibly used, and then disappear when done with. What's more, objects that can be taken are destroyed on being picked up, with only their inventory counterparts remaining.

Enabling the taking-and-replacing of the crown thus called for some implementation.

Specifically, and after some thought, what I ended up doing was this:

I created a "stand-in" object that had the crown's model and in-level position, and that had the "take" action-icon specified for it--but that wasn't actually collectible.

Instead, "taking" the object just called a script-method. That script-method constructed an inventory object and gave it to the player, then shifted the "stand-in" object downwards, out of sight below the floor of the level.

Said new inventory object was set to be single-use, thus causing it to disappear on a successful interaction.

Finally, when the king is interacted with another script-method is called. This method was altered to check whether the inventory-object was used in the interaction, and if so, to move the "stand-in" object back up into place.

The effect, then, is the appearance of taking the crown, having it, then using it on the king to put it back in place--potentially to be taken again.

Remaining in the first tomb, in the week just past I started in on a major element that should, I hope, add some character to this level--and in this specific case, provide a major plot-point.

That element is the first of a set of murals found within the kings' tombs, depicting actions of those kings.

This is by no means done, however! There's work to be done on the form, I daresay, but also on the colour and the shininess of it at the least, I think. 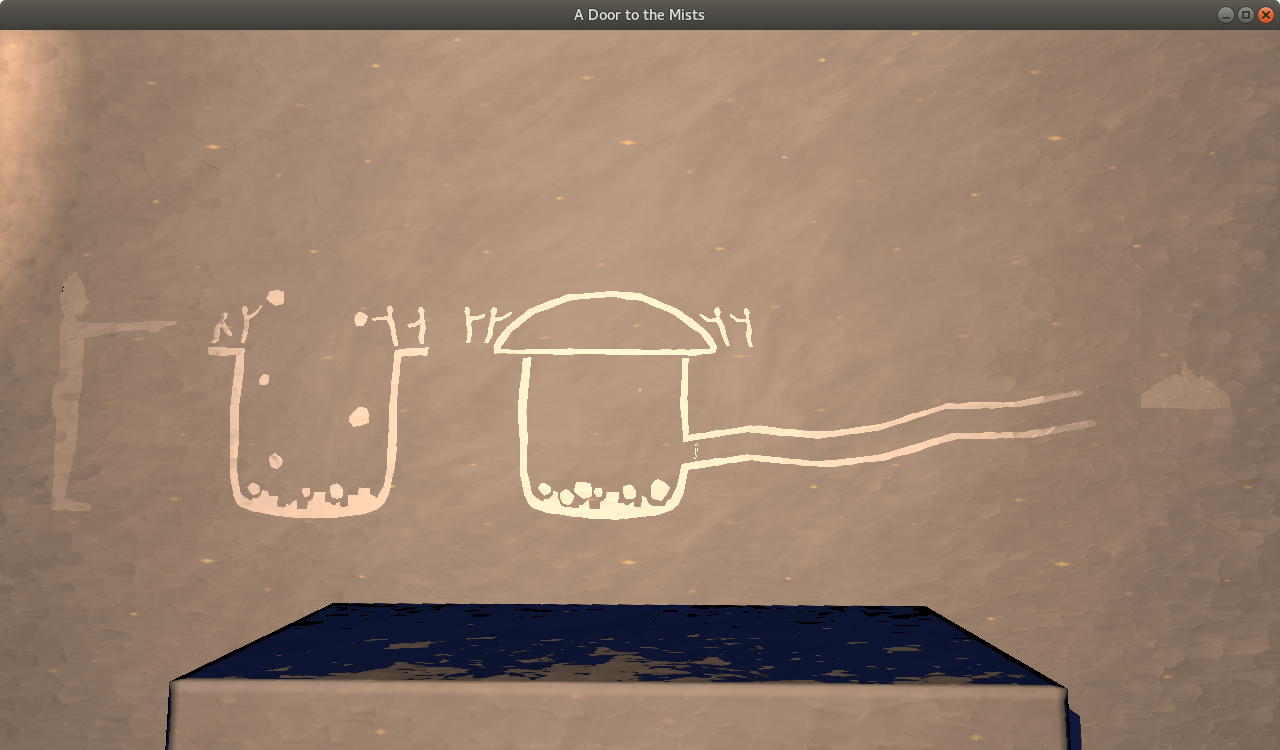 Moving to writing, in the week just past I set down various strings for level eight, or a first draft of them, at least.

On the "business" side of things, I mentioned in last week's blog-post, I believe, that I had finished my second wave of publisher-pitches. However, in the week just past Apogee returned as an indie publisher! I thus made one more pitch, to Apogee!

And finally, some issues with my Panda3D "Beginner's Tutorial" had come or been brought to my attention, and in the week just past I attended to those.