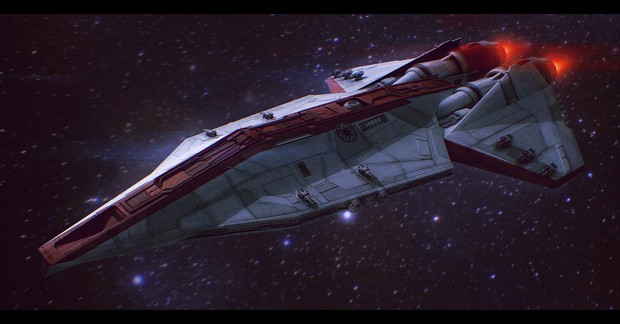 What does its name mean and is it correct to believe you have discovered AdamKop's art?

The Lacterus, while looking similar in appearance to a corvette is actually the personal star cruiser of Supreme Commander Jester, secretly ordered and built by the people he once sworn to protect, the Corellians. The ship yard company sought to make something completely different and radical, while maintaining speed and armour, while sacrificing a heavy armament the Lacterus can perform what it was originally built to do, protect the supreme commander in diplomatic missions and in the middle of battle. Built with two large but somewhat concealed engines the ship can reach speeds much faster than other cruisers, easily out manoeuvring star destroyers and larger vessels. If Jester manages to free the people of his home world of Corellia, this ship may go into full scale production, while the actual ship does not have a name as it was supposed to be a one-time build, although Jester has named his personal variant of the type the Lacterus.

OOC: If any one has any problems with it, please comment or bring it up with the GM.