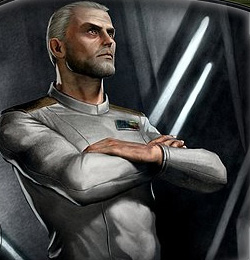 Killton is a human male and a by the books admiral, using many different fleet tactics to out maneuver enemies using his fast response fleet, he resides on his flagship, the 'Punisher' a Praetor II-Class Battle cruiser and leader of the Aggressor Fleet, used for emergencies and guarding certain things.

During his military career he started off as a simple captain of a corvette tasked with guarding freighters later in his career he moved to a captain of a Star Destroyer, were he served in many battles with, being recognised by the Supreme Commander he was put in charge of Aggressor Fleet, following a strict code, the Admiral will make sure if his fleet goes down the enemy will suffer heavy loses.

Killton likes to observe the battle closely through the view port of his flagship by doing this Killton can understand what is happening easier and tell his men what happens next.

Armed with a PT-1 Heavy Plaster Pistol and guarded by two Guardian Commandos.