Zombie Grinder is the debut game of TwinDrills, an indie game development duo made up of Tim 'Infini' Leonard and Jordan 'Jordizzle' Chewning.

It's a multi-platform (windows, mac, linux!) (also Free!) cooperative multiplayer arcade game, reminiscent in style and gameplay of retro games like 'Zombies Ate My Neighbors' and 'Super Smash TV!', but with the added benefit of some newer game mechanics - achievements, ranking, player-customization, rpg style stats and so forth.

The game sports a varietyof different game modes, from co-operative 'campaign' style levels, to wave maps and even the classic 'pvp' style game modes - deathmatch, capture the 'bag' and so forth. All of these mods are bristling with a variety of weapons and items, all lovingly displayed in Jordan's classic quirky pixel-art style. 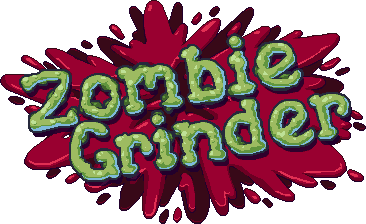 Hi everybody! Jordan here with a little bit of a news break for Zombie Grinder! I know it's been like 4,000 years since I've posted news, as Tim and I have been incredibly busy at our 9-5's, but I've got some fabulous news!

That's right! After an over-a-year-long campaign, your support has helped us catch Valve's attention enough to justify a release on Steam! I know I speak for everybody who has contributed content to the game when I say that we thank ALL of your for your relentless support through the good times, and the bad!

With this unprecedented event comes some pretty amazing news! More updates than I had actually thought we would do! To be honest Tim and I were roadmapping an over-all end-of-the-line update that would introduce a single-player mode and the online side of things would be Peer-to-Peer. We still have other games we want to eventually work on, but with Zombie Grinder being released on Steam, we have a newfound vigor to polish it up and make sure it's a complete experience in and of itself!

Since finding this news out, I've completed 8 new hats, and 6 new weapons. This next content patch which may be a ways off should be very interesting!!

I'm still trying to wrap my head around this whole situation, as I honestly never expected it to happen, and I know Tim's in an even crazier spot, but I just thought I'd let y'all know that we appreciate everything you've all done! From just playing the game, to pitching ideas for new weapons.

Obviously a bunch of stuff is coming, and while I can't exactly put a date on it, Tim and I are shooting for a full release before Summer of next year to co-incide with our Steam debut :)

Thanks again for all your support!

We've got a ton of new stuff we plan to add, but aren't 100% sure if we should trickle it in over time, or make one humongous content update once it's...

Holiday greetings from Tim and Jordan! A small update announcing our upcoming holiday sale, as well as some info on a rapidly approaching sale! WOO!!!!

Shame this is dead. I had a lot of fond memories of ZG. RIP

It's sad that the game with potenthial is dead...:(

Hey Infinitus, whats the current state of the project if you don't mind me asking? Are we likely to see it arrive on Steam because I could see that seriously boosting the popularity of the game and seriously increasing the player base

I hope the update goes well!

The base game is working on Steam :D! There's a ton more functions we can add to the game, so those are being implemented which is adding a bit more dev time than previously expected, but news will be posted once we get closer to release :)

It is :) Details will be posted once we're in a comfortable enough position to share :D

Will Glow the Wisp Arcade