We are offering a stylistically fresh and visually engaging experience in a collaborative multi-player environment. The player will feel the excitement and challenge of strategic military management at the same time as the intensity of interpersonal combat. We will aim for a cinematic, artistically stylized environment and user experience. To imprint on the player the lore and history of the gaming universe that is developed in pre the production phase.

We have completed the creature part of the 2d asset stage and are in discussions with talented 3D artists. The game is currently in the early production phase. So far 2 illustrators, an animator, 2 orchestral composers a storyboard artist and myself the concept originator/ coordinator have come together to form the collective. Plus concept art contribution from artist Darksabata. 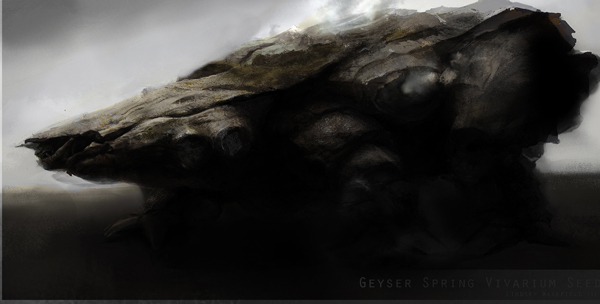 Update 001
We have completed a range of 5 fully rendered 2d creature concepts (which are the the level/playing environments) who's development we mentioned in the post below. We have decided on the two strongest designs to use for the demo. We are now in contact with a number of 3D artist and will continue to the next process as soon as we can. In the mean time I have integrated a forum into the website where team members can discuss and share progress www.wix.com/vivariumseed/home . A kickstarter action plan has been developed for when we reach that stage. The story-boarding for the kickstarter video will commence soon.

Assets Developed so far
At this point we have produced 2 sets of silhouette studies, a grand concept illustration and the 2 accompanying draft sketches. A completed creature concept and one work in progress. We have 10 sketched versions of the 38 silhouette studies made by our concept artists. We have now deliberated on the strongest submissions from this batch and have one orthographic turn produced. A further orthographic turn will be produced by the second artist in the coming weeks, however the artists are currently concentrating on developing final render versions of the illustrations, and have provided Work-in-Progress versions for feedback. The next phase will be the conceptualisation of clansmen/ settlement dwellers. One of the composers has two exceptional compositions which will be uploaded shortly.

We also have one preliminary/ placeholder 3D model in development.

Conceptual framework in the form of

Basic Overview
Influenced by Shadow of the Colossus and and the Black and White series, the game is a 3rd person real time strategy game that is synthesised with clamouring combat elements. The player will feel the excitement and challenge of strategic military management at the same time as the intensity of interpersonal combat. We will imprint on the player the ancient lore and history of the gaming universe that is developed in pre the production phase via subtle hints and iconography, instead of handing the player long winded exposition.

Two plus players collaboratively direct and interface with the creature in an abstract way in order to control combative movement, however the creature also acts as a base of strategic unit deployment. The clansmen migrate to and from opposing Vivarium for the purpose of acquiring Mana.

This means the deity is both an avatar and a dynamic combat environment that players use to deploy units from anatomical locations.

Use your creatures strength to gradually render the opponent prone. Whilst in an advantageous position pin the enemy to one place. This means military units can more successfully migrate to collect Mana from opponent civilians or they might set up counter-defences.

We are putting players in a situation where avatar combat management is shared and impacts the success of military unit management, each members ability to control the two aspects are entwined and affect overall mission success.

Influence
The game is influenced by The Shadow Of the Colossus in as far as the mission and gamplay environment's are located on sapient ecological creature's that create a dynamic transient world for its inhabitants.

Vivarium Seed presents strategic real time micro management of military units, combined melee combat. As opposed to Shadow of the Colossus, which has a human avatar interfaces with the colossi who behave as the puzzle to be defeated.

Other influences would be the Black and White series of games. Where you controlled the development of a pet like God whom reigns over settlements of people: No building development is involved in Vivarium Seed, instead we will have creature evolution that allows more settlement locations/ providing tactical deployment locations.

APPLICANT PREFERENCE Must be experienced and able to produce hi resolution textures and/or produce detailed models with hi poly normal maps low mid to hi models for rigging and animation. You will be joining a up and coming group of industry standard creative's that are either about to enter their respective fields having qualified with honours, or are experienced in there given field. You must be confident that you are able to positively impact the group and meet the high standard already being met. You will be given a full games design doc and access to current assets via an intro pack or DropBox.

The project is voluntary, join for the purpose of being part of a career and portfolio enhancing endeavour. However we are looking to gain sponsorship or gain public funding from Kickstarter in order to achieve all targets set out in the Games Design Document. Potential remuneration for work completed, or sponsorship to continue development may occur once the main target for the demo release is achieved.

Please contact if interested, a project pack with the above mentioned design documents and assets will be issued.

What kind of visual style are you guys aiming for with your textures? I'm loving some of the concept art you guys have produced and the character designs, and I've been trying to deduce whether you were aiming for photo-real visuals, hand painterly stylization, or a combination of both, either of which would obviously fit in with high poly sculpted normal bakes of course.

Yeah a combination of both would be about right! Close to photo realistic but stylised.

I really like the idea and concept of this project. But I have one major question: Will there be singleplayer support?

Thanks, I hope that at some point it will be (its in the design doc), but I think it'll be multi player focused for the initial demo phase.

This is very interesting...As far as gameplay, can we expect a sort of 3rd person melee combat system, akin to Shadow of the Colossus?

NO!!! It is a 3rd person game, however gameplay is far from shadow of the colossus, its not about maintaining balance on the creature, or attacking a certain area. Its about using your creature to physically dominate your opponent to better deploy troops. It is also managing military unit numbers so you can gain as much Mana as possible from as few deployed units as possible as you must simultaneously defend from incoming attacks.

Enemies Reminiscent to Shadow of the Colossus

Artistic and conceptual inspiration came from outside games, such as nature itself, BBC's Human Planet, and works by Kakotomirai and Darksabata.

So sort of correct, that's the nearest gaming comparison, although these are continent size creatures that are home to settlements of people who are infinitesimal in comparison to Colossi size.