Our Kickstarter is live!

The game features a unique mechanic called Apocalyptic Form that allows players to shape shift into a highly customized character! You’re free to mold your character thanks to a deep and rich customization system. And thanks to our complex crafting mini-game and our housing module you will be able to make your adventure feel as YOUR adventure! 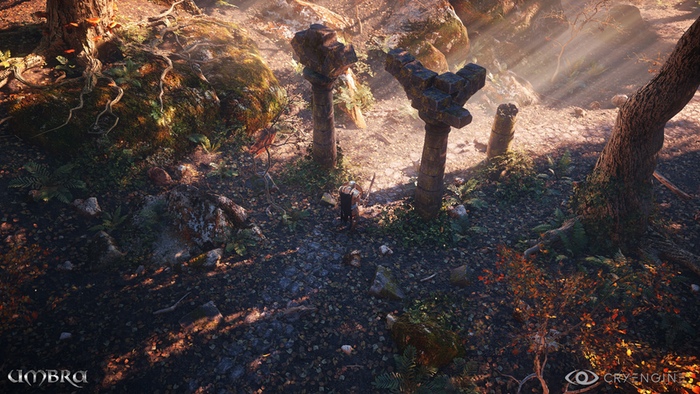 Umbra aims to deliver many features that will differ from the classic games of the genre: 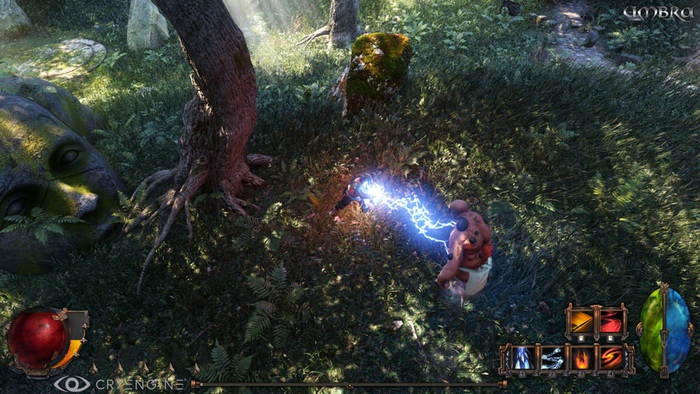 In order to maintain their grasp on the population, the Republic is using vicious tactics, poisoning the population to weaken it and removing all children from their parents to better mold their minds. Newborn babies are rare, and few are born healthy.

An unknown curse has made men lose their memory, provoking a limbo that has eaten their own history and technological knowledge.

Rumors say that the leaders of the Republic signed pacts with occult entities, and monstrously mutated humans are appearing in the wild, leading raids against cities and villages.

Food became rare, leading to an extreme measure. In the name of survival, the Republic declared that anyone over the age of 50 should be killed. The same rule applies to anyone presenting mutation. 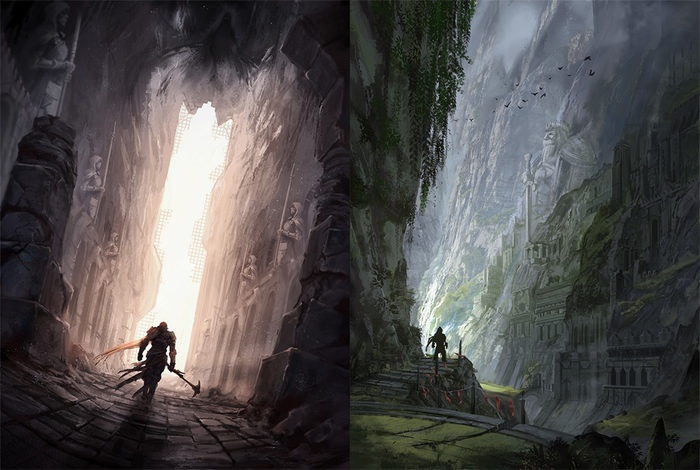 The game will include a large open world featuring various environments, from swamp to mountains, to ancient ruined cities, forests and villages. 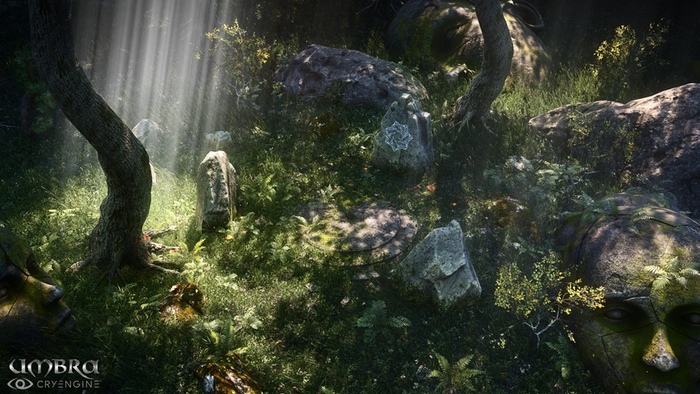 Humans populate most of the universe of Umbra. Other races exist, but are hiding because of the savagery of mankind. Most of the human population has actually forgotten about the existence of said races. The fact is that the Human Republic has conquered most of the known world and eradicated all of the potential concurrent living entities...

You can build your character as you want, picking any skills, weapons or armors and making the combination of your choice. There is no class restriction, the gameplay is balanced by three ressources:

Rage is gained by attacking enemies, but when you gain Rage, your Stamina and Mana will be reduced, and their regeneration rate will decrease. When you use Mana, your Rage bar will deplete faster.

You are free to use skills and spells as you want, but just like the Resource Opposition System, element-based spells will react to the environment and to other active elements in the area. For example, Lightning will spread in water and stun targets; Fire will spread unless water or frost gets in the way; a frozen enemy will unfreeze if you cast a fire spell on him.

Apocalyptic Form is a unique feature in Umbra making all players unique in their look and powers.

While you are playing at a low level, all important actions of your character are recorded. Based on said data, we will generate specific powers for your character, called Apocalyptic Upgrades!

You will be able to gain wings, horns, or even a third arm to equip and fight! 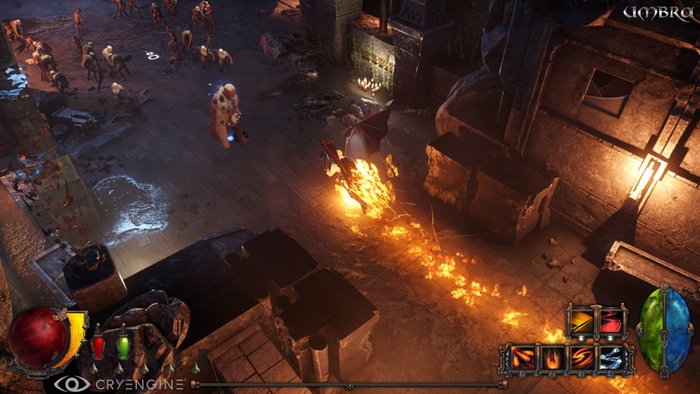 Of course, there will be more powers to discover by yourself!

An Apocalyptic form is created with three of the available powers, but some items or passive skills may allow you to choose additional ones. Entering your apocalyptic form will grant several bonuses for a certain amount of time, but by combining Skills and Items, maybe some of you will find a way to make them last longer!

Umbra allows you to really personalize every detail of your weapons. Weapons are built from several elements. For example, a sword is usually built with a pommel, a blade and two guard elements. Each component of a sword has its own attribute, allowing a huge amount of different possibilities and optimizations.

Final days of our Kickstarter !

Before we get started with our talk about mods and the Pets and Mercenaries you'll be able to interact with in Umbra, we want to take a moment to mention something that is very important… we have reached the first multiplayer mode for Umbra! Thanks to more than 9300 backers, Umbra just gained a whole new dimension and potential. We are so grateful for your help in reaching this goal, because multiplayer is really something we wanted to develop but we didn’t have the funds to do so! And on top of that, you've all helped to unlock the Kickstarter exclusive Green Crystal Armor that will be provided to all backers at Warrior or higher!

We’re now 145% funded and working towards the Female Hero stretch goal which will allow us ti include a proper female hero into Umbra (we’ll talk more about this particular stretch goal over the weekend, so be ready for that update!). And now, into today’s update!

We took some time to record some footatge to show you some really easy tweak example of what our game system can do. It is a glimpse of what modders will be able to do, since all our game system are based on XML files.

As stated before in other updates, please remember that the CryEngine Sandbox Editor modders will need for important modification is not our product, so we cannot redistribute it. We try to keep some compatibility with the CryEngine FreeSDK, but the optimal way to mod the game will be to get your hands on the CryEngine EAAS.

Many of you have asked several questions about what the Mercenaries and the Animal Companions (Pets) will do in the word of Umbra. Are you ready to learn more about how they will help you on this adventure?

How many mercenaries or pets can you have at any given time?

At first? Per the default set up, players will only be able to have one of each as they take on all the dungeons, missions and side-quests we’re creating for Umbra… but there’s a twist! Depending on how you build your hero, you will gain access to a set of passive skills that will improve your relationship with your pets and with the mercenaries you can hire, and this will allow you to have up to THREE dog companions and THREE mercenaries with you at once!

Like we’ve said over and over, we want players to play Umbra the way they want, and the game is very permissive for character building. Therefore, high-level passive skills allow for a lot of “super-effects” such as this one! Can you imagine running around a dungeon with the Umbra WarDog, the Zombie WarDog and the Frost Wolf by your side? Or how about a fierce group of experienced mercenaries to cover your back.

And since, again, players can enjoy playing Umbra anyway they want, they can even select to go at it solo with NO PETS and NO MERCENARIES at their side for an even greater challenge! How will YOU take on this grand journey? 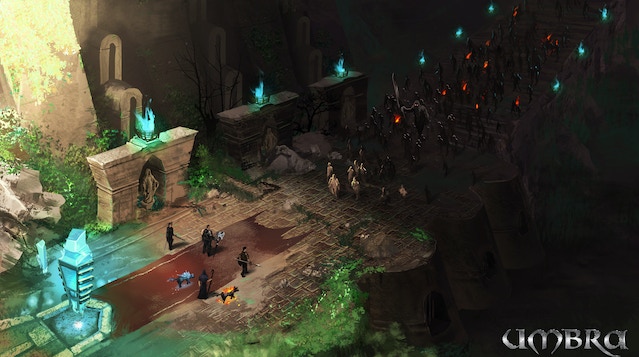 What can the Mercenaries do?

The first thing you need to know about Mercenaries is that they fight for gold! You first need to hire a mercenary by paying their initial fee. After that, for each mercenary fighting by your side, a percentage of all looted gold will be given to them! Their name says it all, and they won’t fight with you if there is nothing in it for them!

As for what they CAN do in the game, we want to let you know that Mercenaries have several “classes” for you to choose from in order to get the ideal companion to fight with you. A Mercenary can be of one of these classes:

Per default, all these class will have several attacks (such as, say, stun enemies, force enemies to attack them, cast various offensive spells, etc.). However, you will be able to give each of your mercenary one Spell Book – from the same ones that you loot and read to gain new active skills – for them to use, and this will be a great way to complete your strategy and personalize them a bit more!

On top of ALL OF THIS, Mercenaries will be able to equip any armor, helmet, weapon, ring and amulet that you loot or craft in the world of Umbra! This means that if you’re ready to pay the price, you could have a balanced party full of mercenaries to support your playstyle or to take care of filling a gap in your skill set. How cool is that?

What can animal companions/pets do?

Per default, unless you have a special pet skin for your animal companion (like the one for the WarDog, the Wolf or the Fire Wolf!), you will have a good old-fashioned dog. This dog (or the pet you use from all the available Kickstarter-exclusive pet skins!) will have several functions: 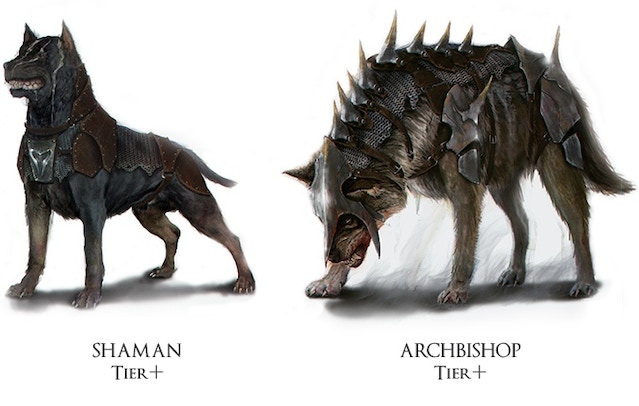 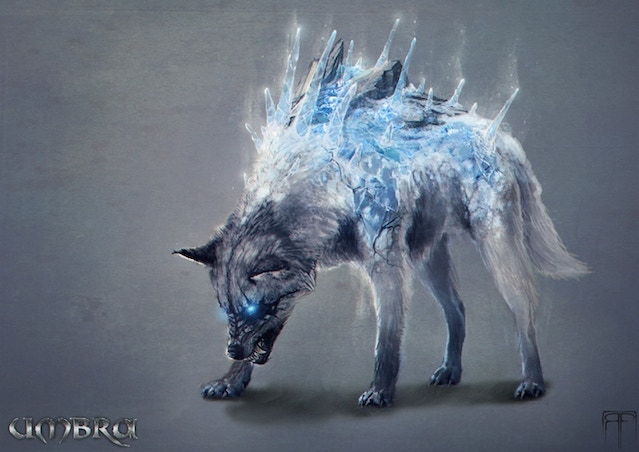 So, there you have it. This is what we have in mind for the Pets and Mercenaries in Umbra! And don’t forget that depending on what tier you’re pledging at, you will gain access to one or more cool-looking and Kickstarter exclusive pet skins for your animal companion!

We are going to present to you a glimpse of one of the most exciting features of Umbra: the Apocalyptic Form!

In today’s update, we want to share with you the early work available for the basic character customization elements in Umbra!

Information about end game, and a video about Randomly generated Levels and possibilities for mods!

Today, we are going to show you Umbra’s crafting and weaponry system!

This looks spectacular, and I can already imagine the potential this has on the gaming world when a small team can make something like this... Imagine a AAA dev being pushed to create a game of this level... oh dear god think about the next elder scrolls with this level of quality *Salivates*

Congrats on KS campaign succeeding! I was so happy to back your game and show my support. I love your game it looks amazing I totally look up to your guys work. So cool all the best with your game and your team I know your game will be huge.

This needs to be shared EVERYWHERE...

Tracking. Love me some aRPG.

If you get enough on kickstarter, I really want to see a ground-level 3rd person perspective option. I want to enjoy the game environment at every angle I can.

Another great idea... 3rd person might just be too much eye-candy for us to handle

Will I be able to fight with a quarterstaff? To many games neglect staff fighting.

Really good point... the last time I remember fighting with a staff was in Sacred 2 and Magicka. I would love to see more staffs in games.