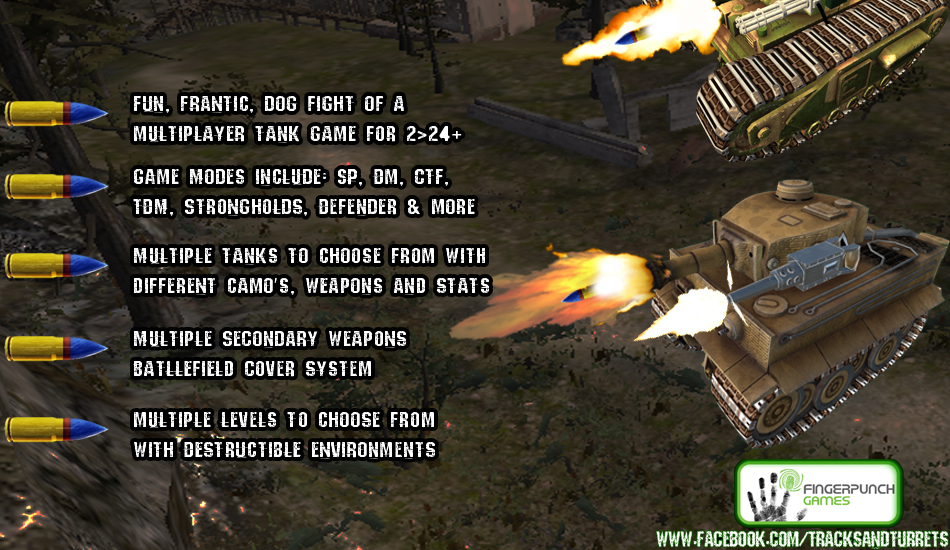 Tracks and Turrets is a top-down, Single, and Multiplayer, tank battle game.

Play against challenging AI, in Single-Player, or compete to be the best on the high score tables in Multiplayer Deathmatch.

Tracks and Turrets is a fun, frantic, dog fight of a multiplayer tank game.

Tracks and Turrets Update Is Here!

Tracks and Turrets Update Is Here!

It's been, just over, a month since our last news update and we're very happy to announce that the latest update, for Tracks and Turrets, will be available Friday 19th February 2016 at 13:00pm GMT! We have so much to show you that we had to make 2 announcements to cram it all in :p.

We've made a lot of changes, to TNT, since our last game update, and we hope it's been worth the wait. We still have loads more that we want to implement, including another 3 multiplayer maps, the long talk-about Single Player Campaign and much more.

However, for now we'll just cover what the new update includes, or doesn't include:

New GUI We've been working on implementing the new GUI, it's not 100% completed, but provides everyone with enough info (for now) to navigate the menu system easily and cleanly.

Not much change here, except for the addition of the 'New Game' and 'Load Game' buttons, ready for our Single Player Campaign. We've also added a generic garage level background, which we'll be changing for something much more dynamic, and pleasing on the eyes, in one our next game updates.

The Options Screen is one of our least updated screens. However, we have added the option to reduce the Audio settings, however, only the Music Audio can be reduced, the SFX will be added at a later date. We have also included a 'Show My Tank's Name' check box for those who like to see their name above their tanks in-game :).

Again, not a great deal of work has taken place here, but there are a few additions that you might not, necessarily, have noticed. Firstly, when you connect from Steam, you'll automatically connect with your Steam user information. The game server should also auto-connect. Tanks can now be rotated manually by holding down the Right Mouse Button and moving the mouse left-to-right, this is a function that we've introduced to provide better control of your tanks, and also allows for visualising new upgrades, and additions that we aim to add to Tracks and Turrets.

The Create Game screen allows for the usual, multiplayer, settings. You can apply a name for the game server, select a map*, select a game type**, decide whether the server should be a private server with a password*** set the maximum number of players allowed in the game and also set a Score Limit. Score limits are simple measures to allow you to finish the game when you reach a certain 'kill' score. These are set to generic values, but will be replaced with alternative options at a later date.

This screen has been updated to include the server name, the map being player, the number of players active, and the maximum number of players allowed, it also includes the current ping of the game server. To the right of the screen an image of the map is displayed, with duplicated information about the server, with the addition of the score value applied.

In-Game Improvements We've spent a great deal of time thinking about how to make the game more fun, challenging and visually more appealing. We've spend many weeks tweaking the environments, camera effects, particles and environmental objects, all the while trying to add as much fun as possible. Below, is all the work we've done to help make TNT much better.

Explosions have been improved, dramatically, they have been scaled to ensure that players can actually see, and feel, the explosive force of your tanks and the objects that you have destroyed. Every object has a specific PFX assigned to it, so every object explodes in a completely different way, depending on the object type, for example: Rocks have a dusty particle, whilst barrels have a fire-based explosion. This is also true for wood, other materials and the Tank also has it's very own, specific, shell explosion.

We wanted more things to destroy... MUCH MORE! Because that's what we love to do! So that's exactly what we did. We introduced hundreds of new props that could be destroyed in-game. These will provide players with loads of things to destroy, objects to hide behind and ways to even trap other players behind. Every, destructible, prop (as previously mentioned) has it's own, personal, stats. These include:

We have removed the ability to destroy larger structures, or buildings for now, as we want to ensure you have the best visual experience by implementing destroyed structure's replacements. So, we haven't given up on these, we're simply waiting until we have suitable replacement meshes.

HUD Improvements/Updates The HUD has been another of the main focuses of the new TNT game updates. Many of the previous HUD items were confusing, provided little information, weren't user friendly or simply didn't fit well with the rest of the game. So, we set about improving all of these flaws and hope that players will enjoy, and benefit, from the latest additions/updates to the HUD.

We have a new Mini-Map with new player and power-up icons. The Mini-Map is cleaner, and smaller, to provide as much screen space as possible for players. We also have new North East South West directional letters for those who need to know where they're going. We've also added a new Orientation bar at the bottom of the screen to further provide players with location/orientation information.

We also know how important it is for you to keep track of your scores, and position, on the scoreboard, so we've updated that screen too. It can be access by pressing the Tab key and details your game stats, including your current ping rate.

Players need information! So, we're doing our best to keep players up to date with everything that's happening, in-game, 'when' it's happening. We've added a central notification bar that alerts players to when new players have joined the game, and also when existing players have left the game. In the top-left of the screen, players will also see the kill stats of all the players.

As previously designed, players should be notified of the powerup they have collected and the time span in which the powerup will run out. So, players will receive a central notification bar, when a powerup is collected, and to the right of the screen a bar which will slowly run down as the effect of the powerup runs out.

And to conclude the GUI/HUD updatest, we finally reach the player/tank stats HUD. This is where the player can establish all the things that are important to the them. In the bottom-left of the screen is the armour and health values of the player's tank. These will deplete, at different rates and amounts, based on the type of ammo used, the percentage rate of the hit and also the critical chance hit. Alternative ammo types have still not been implemented, but will be added at a later date. On the bottom-right of the screen are the ammo values/stats. The ammo section, naturally, displays the ammo 'types'; on the top is the secondary ammo type with a current stock and a max stock value, this can be replenished by picking up the ammo refill powerup.

Below that is the primary ammo reload information bar. The bar simply flashes 'RELOADING' when the ammo is reloading.

And 'READY' when the primary ammo has been reloaded.

I know that we promised the cover system, prior to launching the first release of TNT, way back when, but never included the feature. And this was purely down to some issues we encountered with the networking code and communication with the server. The cover system was 'always' intended to part of the initial release, but was only pulled a few hours before the game was released. However, we're working very hard to reimplement this system as we know how important this mechanic can be to players, especially those who like to lie-in-wait for their prey. So, to show you that we haven't forgotten about the mechanic, we've made sure to add plenty of cover locations, in every map, for players to hide in, whilst we work on the fix (can you see me??) :).

We've also implemented a much better player highlight system, which ensures you can see yourself, whilst under cover, or visually obstructed by a large object.

Closing We hope that you enjoy the changes we've implemented in the game, and look forward to you all playing the game very soon. Our next updates will include more multiplayer maps, whilst the rest of the team works towards the improvement, and refinement, of the Single Player Campaign. We're hoping that the Single Player Campaign will encourage more players to find an interest in the multiplayer game and that it contributes to the game by starting to fill the multiplayer servers.

Many thanks, the TNT Dev Team :)

As promised, in our last post, we were working towards improving the games overall visual style and look. We think we're well on our way there!

Indie
Tags
Embed Buttons
Link to Tracks and Turrets by selecting a button and using the embed code provided more...