Warlords Battlecry: The Protectors (or TPC), is a mod for Warlords Battlecry 3
and sequel to the Warlords franchise.
TPC is an ambitious project which focuses on a new interactive RPG experience and a streamlined &
modernised RTS experience. It is stand-alone, meaning that it can be run without having the original
game installed.

Currently, TPC is in development (and has been since 2010), and has not reached a stable version.
However, there are beta versions available for download. All users are considered beta testers and are
encouraged to report bugs and make suggestions:
- On the TPC forum
- On the TPC Discord channel
Multiplayer games are also run on the Discord channel.

For more information, including the forum, videos and other, non-ModDB download links,
check out the official TPC website here. Becoming a member of the official TPC site will
also ensure your name's (or nickname's) appearance in the credits list once the mod is
fully developed.

Among various other features, TPC attempts to achieve the following:
- Provide new RTS and RPG elements which deliver greater strategic and role-playing depth,
including greater terrain influences on battles, unit types, dialogue choices, multiple endings
and psychological profiles
- Improve old, poorly designed systems or mechanics, including the resource, combat stat, damage type/armor, hero, retinue, conversion and terrain systems
- Integrate all official Warlords lore into the game, including lore from: Warlords, Warlords 2, Warlords 3 & its expansion, Warlords Battlecry, Warlords Battlecry 3, Puzzle Quest & its expansions,
Puzzle Quest 2, Puzzle Quest 3 and unofficial TPC lore to help fill any gaps (which is based on and respects Warlords lore)
- Provide new content, including music, maps, productions, heroes, items and a new story-driven, multi-choice campaign with diplomacy, new locations, quests, characters, and videos, which also changes based on hero traits and any of their prior actions or choices
- Provide the campaigns of the previous Warlords Battlecry games, including the Tears of Dawn WBC1 campaign, the Conquest WBC2 campaign and The Fifth Horseman WBC3 campaign, all updated with TPC’s gameplay
- Improve pre-existing content, providing new graphics, audio, features and functionality
- Provide up to 16 player gameplay which can be reliably played in multiplayer
- High resolution support for up to 4K
- Improve the editor, increasing the amount of control that map-maker’s have over their designs
- Fix every single one of the series’ bugs, from the most notorious to the most insubstantial, thereby providing the most reliable and bug-free experience in Warlords Battlecry history
- In general, bring the game up to modern standards and fulfil the potential of Warlords Battlecry, the founder of the role-playing real time strategy genre

Twenty months have passed since I've last written to you about the magical lands of Etheria. Much has changed since then. Firstly, the gateway interface into this world looks more appealing, in a dark and sinister way and it easily adapts to all resolution sizes. When a hero is born, you are presented with all his achievements, stats, skills, perks and psychological profile. Engraved in the tablets are also his racial background, class background and even faction background, with lore extracted from texts of old. 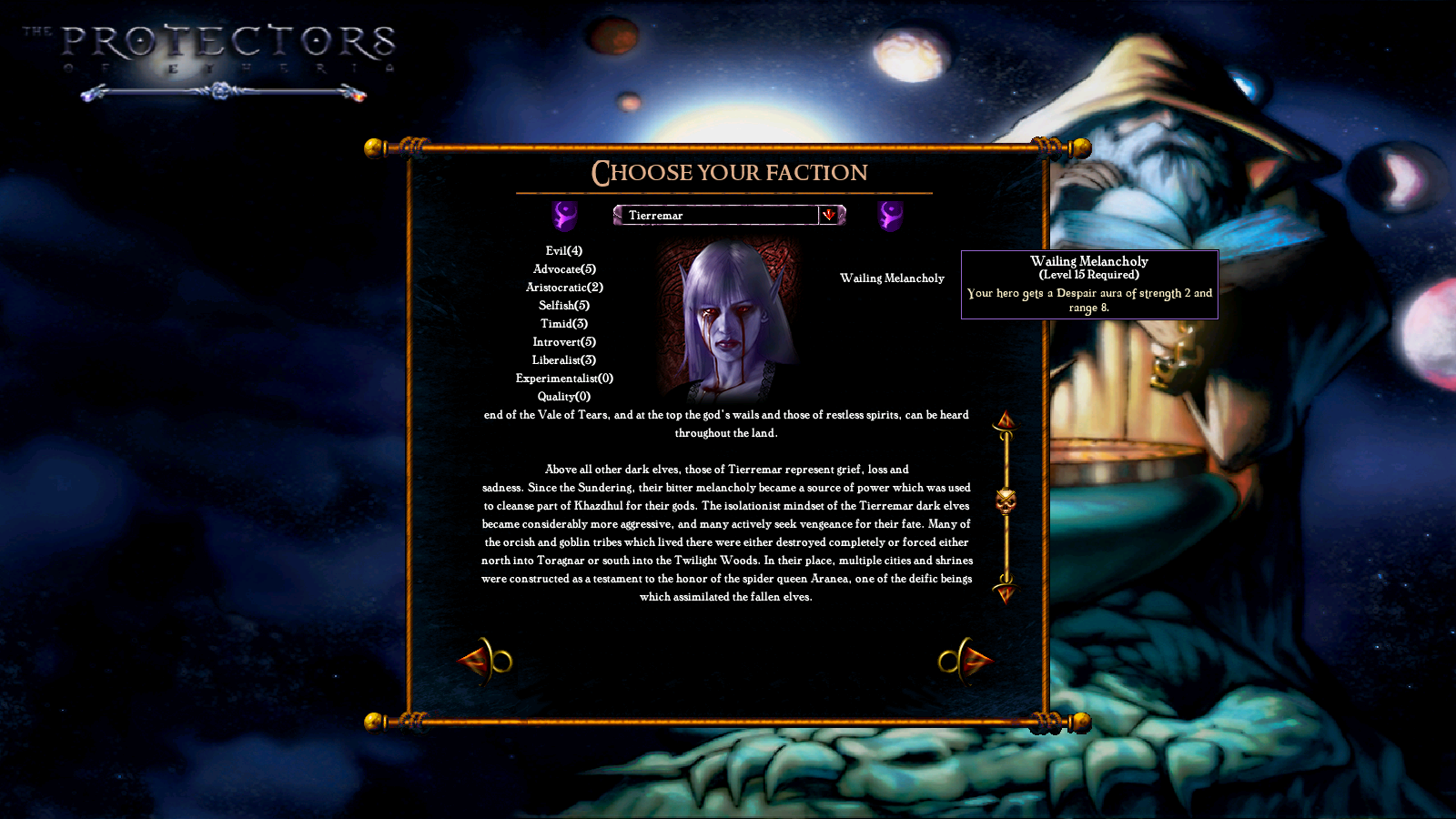 The peoples of Etheria have never-before been so divided and war-hungry. Every race has split into several factions, each with its own beliefs, culture, strategies, armies, buildings and researches. I have once met, for instance, a faction of undead who seek to do good, or gnoll pirates trying to steal foreign technology. Some talk of snakemen laying in ambush, totally camouflaged under the cover of jungle, Minotaurs gaining more strength the more enraged they are, Daemons teleporting their buildings to and from their plane of existence into ours, giant scorpions laying eggs into their victims… the list goes on. I will leave attached within this letter all the details I managed to gather about all of the different factions. Notice their symbols and emblems and act accordingly.

It has become harder and harder to survive these perilous lands. Strategies vary so much, you rarely know what to expect next from the enemy. What is worse, there’s been talk of a supreme being, a Demigod AI, which, using its superior intelligence, outmaneuvers, outsmarts and destroys any and all armies that stand in its way. Battles are sometimes fought on 16 different sides – can you imagine 16 warlords and their armies all clashing together? Truly fearsome. It is of no surprise to meet despairing units, terrorized ones, frozen, disease stricken or simply frenzied. I've also seen bleeding, frostbitten and even crippled soldiers. Gore is everywhere, with large blood pools of naga-green, human-red, demonic-black colours mixed together with scorchmarks, arrows and broken axes.

Naturally, more stories have cropped up in this period of time. Several new chapters have been written in the book of The Protector’s Campaign and some remembered and re-edited the War of the Broken Oath, The Tears of Dawn and other war-related tales. I find it quite exciting to relive these historical events.

Alas, war brings profit for those who know how, so many creatures have set up their shops. They buy and sell weapons, resources, potions and information. Sometimes they have to deal with thieves too, and most shopkeepers now have hounds and guards hired. They are also highly competitive with each other, and so overall prices fluctuate a lot. Often I’ve managed to obtain a profit by buying wares at a discount and selling them at a different shop. 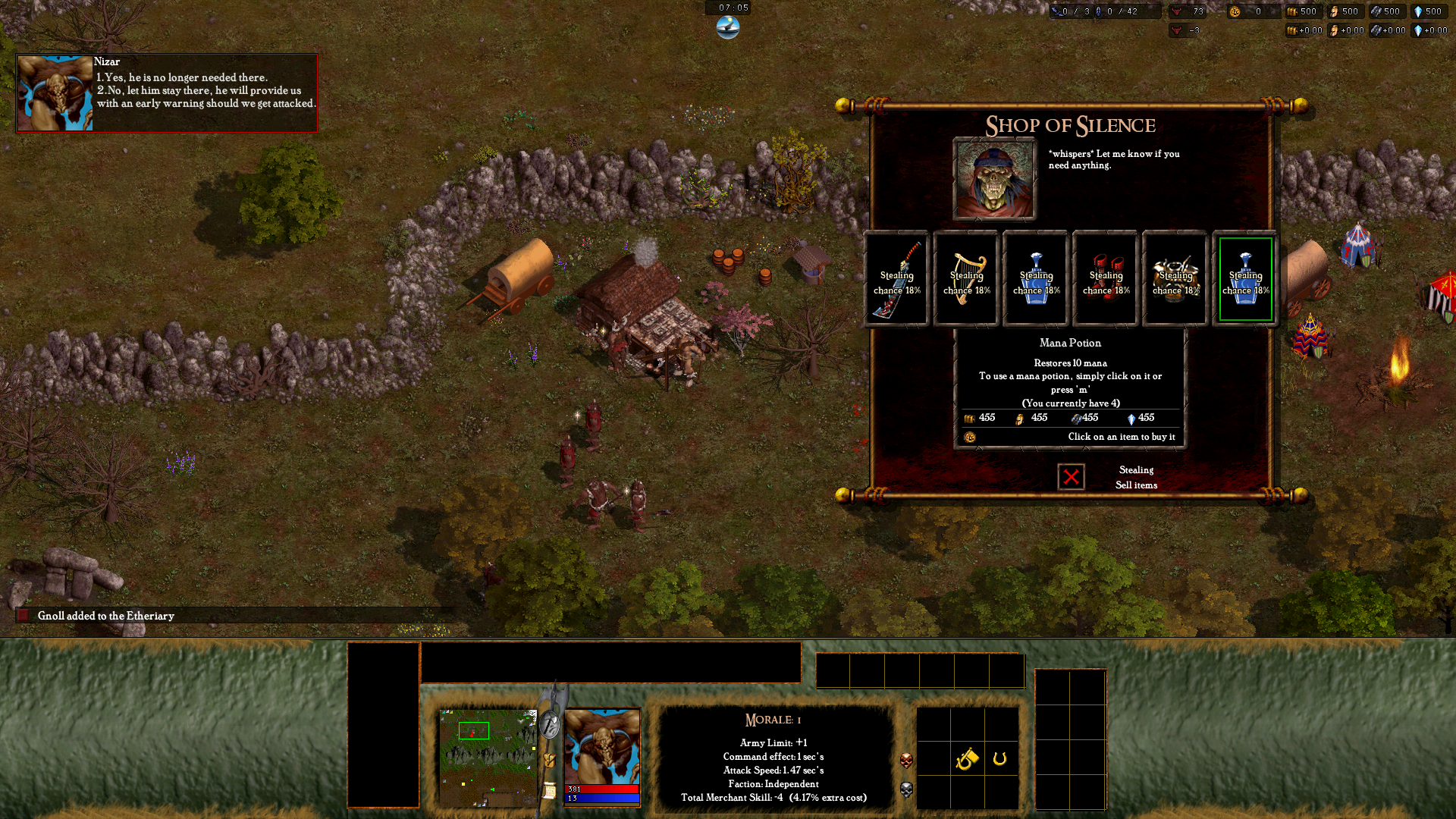 You have to be careful though, some items carry a curse. I once bought myself what looked like an ordinary ring, only to find out that once equipped, it got stuck onto my finger forever. The ring was whispering to me with evil words, telling me the name of the curser. I eventually met this creature and slew it and so the curse was broken and I was a free man again. Yet I somehow lost the ring’s beneficial powers too. I’ve later discovered that you can also break the curse at a shrine or mausoleum, and that some prefer to live with their cursed items instead of getting rid of them. Curious, is it not?

Well, with all this new information I’ve started writing it down and cataloguing it into an Etheriary – a compendium of all creatures, buildings, quests and items I’ve encountered along the way. I’ve heard others are doing the same in order to help them craft theories and new battle tactics. You should keep an Etheriary too, along with your Journal, for it is a very useful habit. 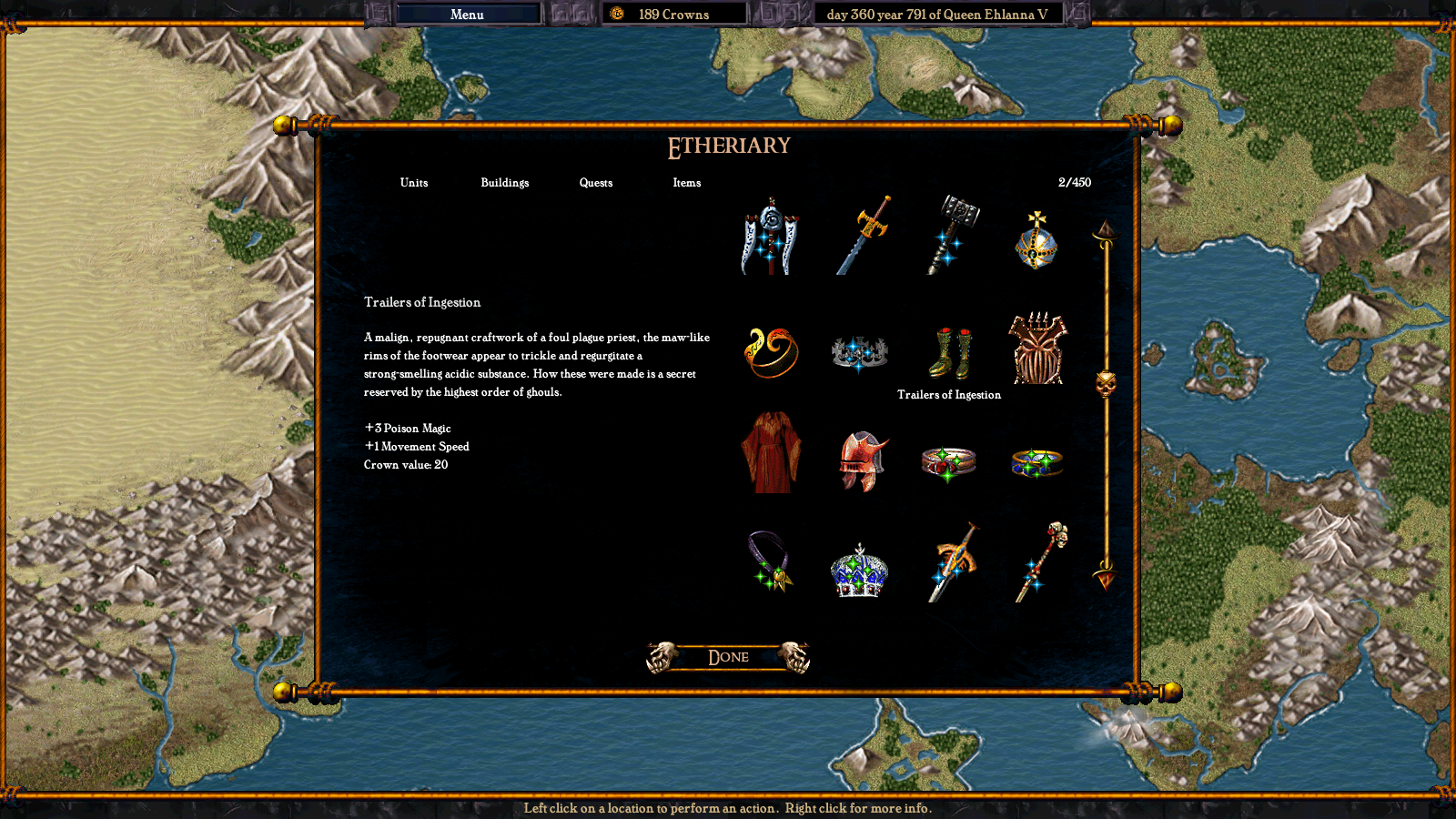 I bid you farewell for now. Remember to sharpen your sword and revise your spell chants. You will need them for what is to come. Enclosed I leave you my changelog to provide insight.

A Grand Councilor of The Protectors Team

P.S. If you want to help each other out with much needed coin, you can do so by donating. I also frequent the pub at Discord for friendly chats with other warlords… and warladies.

My fair warlords and warladies: it is with great pleasure that I announce the release of the newest and most awaited version of The Protectors. Witness...

Dear warlords and warladies, rejoice! 'Tis the time to celebrate the release of the newest version of The Protectors. After almost one year of development...

As the new version is about to be launched, we would like to present a feature we’ve been working on intensively: the quest system.

The Protectors dev team is finally ready to present the long awaited new version of your favourite game mod: The Protectors version 0.8.6. With over 580...

Warlords rejoice! Version 0.8.9b of The Protectors is finally here. Requires version 0.8.9 FULL and patch 0.8.9a. Heroes from previous versions are NOT...

Warlords rejoice! Version 0.8.9a of The Protectors is finally here. Requires version 0.8.9 FULL. Heroes from previous versions are NOT deleted, but saved...

Warlords rejoice! Version 0.8.9 of The Protectors is finally here.

Quick fixes regarding multiplayer stability and other minor gameplay tweaks. Requires patch 0.8.8a. Heroes and saved games are NOT deleted.

What started out as a hotfix ended up as a patch. Requires version 0.8.8 FULL. Heroes and saved games are NOT deleted.

My fair warlords and warladies: it is my pleasure to announce that the newest and most awaited version of The Protectors is finally released. Witness...

In addition, the comments mentioned version 0.9, but what can be downloaded on Moddb is the old version of 2019? Where can I get the updated version?

Hello, I'm a Chinese player. I hope to localize the language to promote this mod. I don't know much about programming, but I can help with the translation. I look forward to your reply. Thank you!

Another bug after battle, all perk what my hero have - wiped - elder dominion, ,master of arms, and wailing melancholy, and i lost 16 skill point's what i spend on this

When i equip sword phassorem blood reaper, it's cursed, but problem not that.
Problem - when i start fight and choise hero game crushed to the desctop with this sword, always. And i cannot unequp this becouse item cursed, what shood i doo?

Bug fixed in 0.9. In the meantime, try to get rid of it with a decurser on the world map.

My backpack was full and the game offered me the possibility either to drop an item from my backpack or not to take the quest item.

As I clicked on it I could not change between the window of the reward item and the window of my backpack/stash. The first window did not disappear and fully covered the other window, so that I could not see anything...
Because of that I had to drop the set item I wanted to keep to proceed.

I need this item but I do not want to start over because of this bug.
Can you tell me, how can I get it despite of that?

I am open for any cheats or editor.

I've been a huge fan of Warlords Battlecry II and III. The protectors is a mod for WBC III which brings some nice ideas to the original game such as an improved hero leveling-system, balance changes (in the first skirmish I played to try this mod out, I ran into barbarian war hounds which were strong and pretty useful, compared to their weaksauce-version in WBC III) and the re-introduction of bronze and zinman-mode. The new perk system brings an interesting twist to alter your playstyle. You can…

Indie
Tags
Embed Buttons
Link to The Protectors by selecting a button and using the embed code provided more...