Hello there! Here's what our development has entailed (or what is worth-showing) for these last two months:

(Pan around the Castle.) 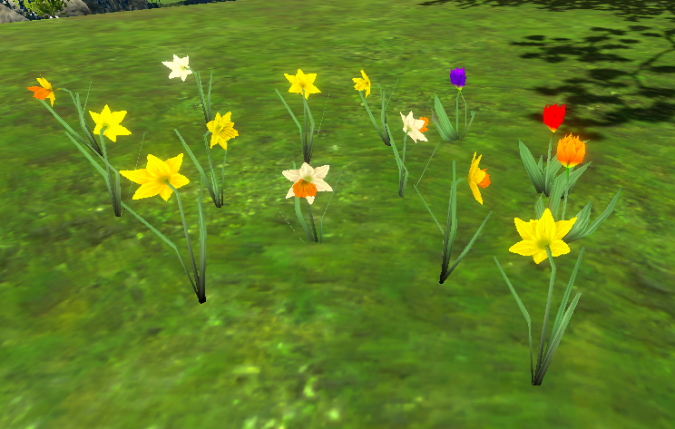 Jon has been working on the revised character motor. Some spoils include:

Swimming and tree climbing are almost back to where they were, but still have some issues with vertical movement.

An additional goody that has resulted from this past month’s motor work.

Once the new motor is “good-enough,” then v0.2 should be ready to go! There are quite a few bugs to get, however…

One thing we've worked on, over these past couple of months, is the adaptation of our splatmap shader to use world UVs. What’s “world UVs” you ask? It’s where the UVs, or how the textures/maps are laid out across the meshes, are calculated in world space, rather than the mesh’s local UV space. This allows separate meshes’ textures to line-up and the tilings to be the same (independent of their UV size/layout), thus reducing development time – which is important for this game! Now, only the splat color control (for deciding which texture goes where) uses the actual mesh’s UVs. Some sources I looked at to help with this shader are:

As you can see, world UVs are the same across all faces in world space (independent of UV scale, rotation, or orientation). It's not perfect, there's some issues with certain angles/normals where there is minor stretching, but it'll do for now.

The tiling of the textures was also an issue, as they were tiled in some larger scenes up to 100 times or greater on their materials. We are not sure if that would hurt performance or not…

That’s all for now, until next time.

Still loving the progress thus far. It keeps getting better and better!