Space Crew is a multiplayer game with first person action and strategy for 2 to 8 players to play cooperatively. Players will be part of the crew of a spaceship in great danger.

The spaceship will suffer flaws along it's travel and the objective of the crew is to cooperate in order to keep the ship in one piece until they reach a safe space port.

We will have several roles to choose: Engineer, medic, electrician, firefighter, repairman and even an Stowaway. This rol will establish the skills of the player and its ability to repair systems and objects.

Objective:
The game will be won if at least one player is still alive when the spaceship makes an hyperspace jump and reach a safe space port. The game will be lost if every player dies before arriving, and the game will end.

Game mechanics:
Players will face systems failures in every vital system of the spaceship, like the gravity system, oxigen, temperature, motor and fire extinguisher, and they will even have to face a plague of aliens making a nest in the electrical system!

Every crew member is able to repair any system, but efficiency and safety will be different according with the class (or role) and tool that you have at the moment. To repair a system, you should "hit" it to make the progress bar increase. If you release the repair button when the progress bar is at 60%, you will have a 60% chance of having made a successful repair and a 40% of failing your reparation attempt and having wasted your time.

The time you spend to repair each system is crucial. The player must take into account every second spent on a system, because as you are repairing something, other systems may be failing and making all your spaceship and its crew in danger.

The player will get points for repairing systems, healing mates and performing other tasks that helps the team to fulfill the objective. At the end of the game, you will be able to see how useful have been each player during the game.

With the points you earn you can buy new skins to customize your avatar. To unlock some tools you will have to get certain achievements. 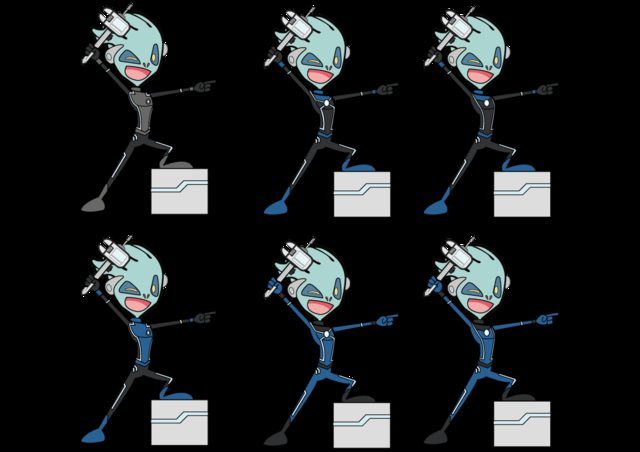 The Ship:
The ship would be our map. We can choose between differents ships, changing the playability of the game. It will modify too the difficulty level and the duration of the game. 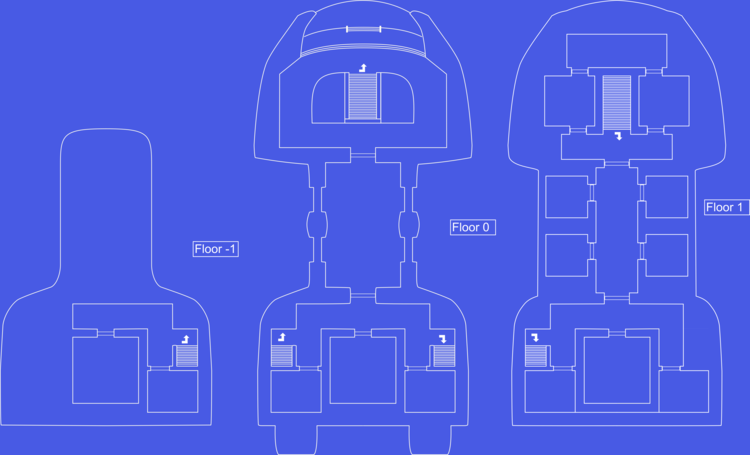 The ship will be composed of different rooms. On each room we can find differents systems that we should try to keep operative as long as possible. We'll have an information panel next to the door. Here we'll be able to see the oxygen level and the temperature of the room among other data. 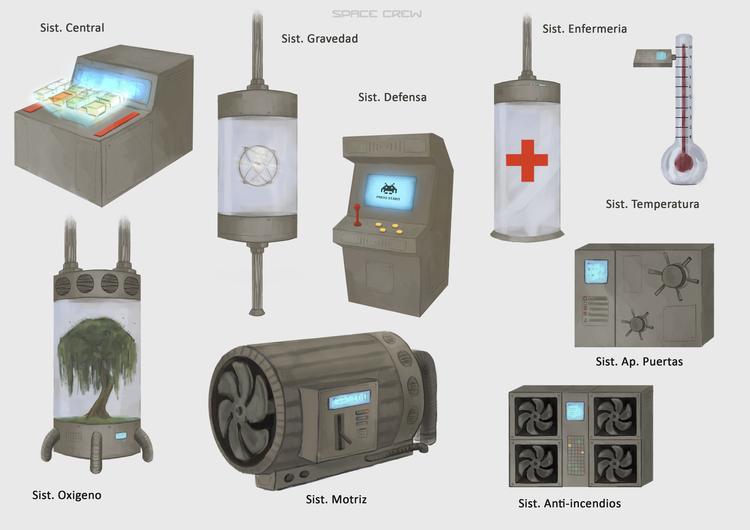 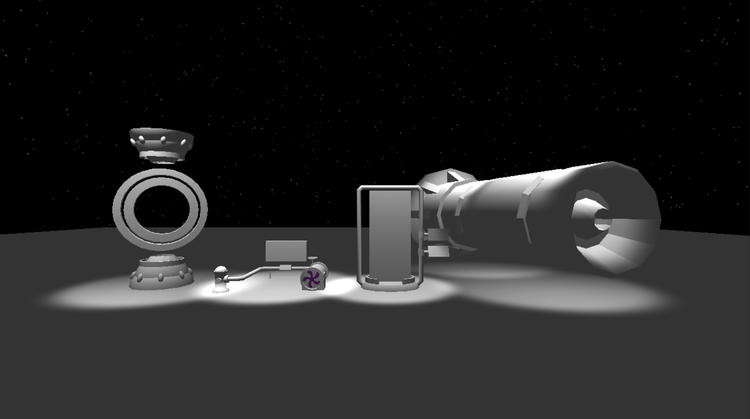 Game Modes:
In the alpha version we'll only have available the normal mode. Our objective is reach our destiny before the destruction of our ship. In the future we'll add other modes like the Saboteur where one player will be chosen randomly to disturb the others, but nobody knows who is he. His objective is to prevent the other players from reaching their destination. We'll have a competitive mode called Battleship. We'll fight against other ship, trying to destroy it before they destroy our ship.

References:
We have inspired a lot in Team Fortress and it's cartoon style. We want the game to be funny and with a lot of humor sense, very similar to what we find in that game.

For the playability, we are trying to innovate all as we can. We haven't found a game similar to this, so we haven't inspired on any videogame to design Space Crew. However, there's a table game that is a clear source of inspiration. We talk about Red November, a mythical cooperative game where our objective is maintain a submarine. We want that Space Crew have the same spirit, but with our own style and of course, more fun.

About us:
Ninja Code Studio is a video game studio from Seville. It is compound by students and graduates of Graphic Design, Computer Engineer and Arts. What began as a hobby became a serious project where everyone fight for the same goal: make a living making video games.

Space Crew is being developed with Unity 3D and Blender. We're going to release an alpha version free for all so everyone can try the game. After we'll have created a bigger community, we would like to commercialize the beta version and its anticipate access. We'll try to release the game on Steam and , of course, in other platforms without DRM. More or less like Kerbal Space Program did. We don't discard other funding options.

If you want to know more about us or our project you can visit our web site clicking here!

Space Crew's development is booming. We have started to negotiate the Steam release with one famous publisher and, if everything goes right, it could be released on consoles, so we are very excited for this. We have always dreamed about seeing one of our games in our Steam library. When everything is formalized, we will give further details about the publisher.

Today we are going to talk about the new map that we are actually working in. This map is much bigger than the previous one: while the first prototype was designed for 4 players, this map is designed to challenge even 8. It has 4 floors connected by a gravitational elevator and some emergency stairways (we don't recommend using them if you are short of time). These are the floor planes from the new ship. 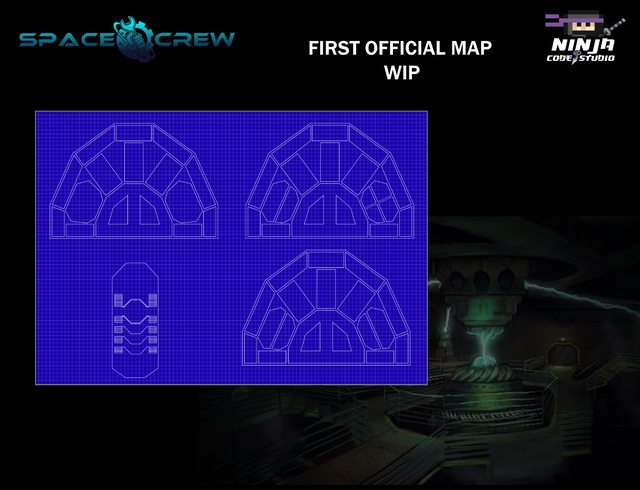 At the moment, we only have modeled the control cabin (4th floor). This is an advance. 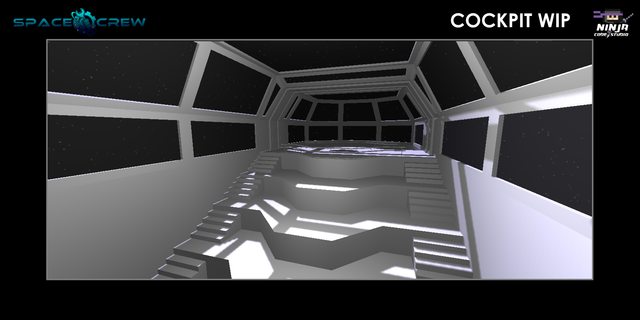 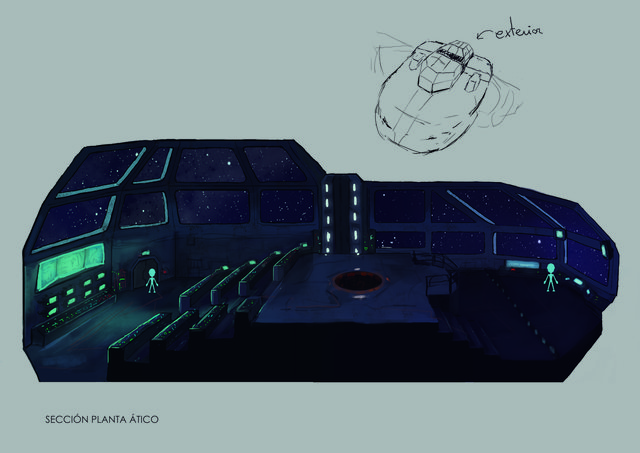 We took inspiration from the Sevastopol from Alien with an 50s style (Fallout style). We've redesigned all the systems and added lot of probs to give the ship a great ambience. 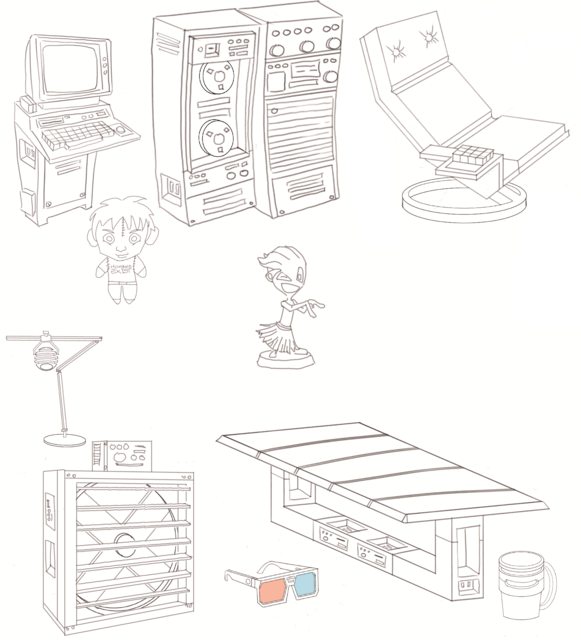 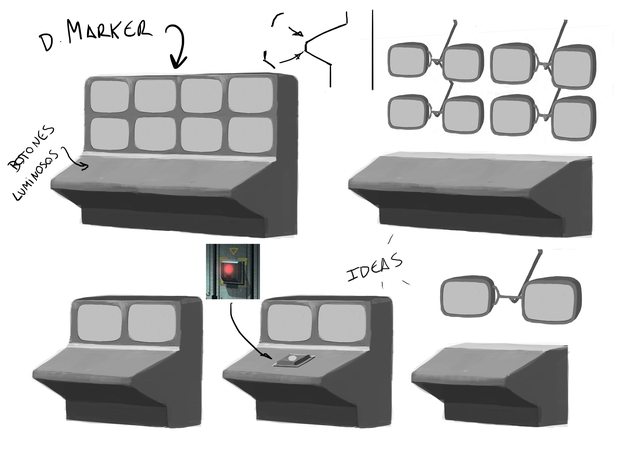 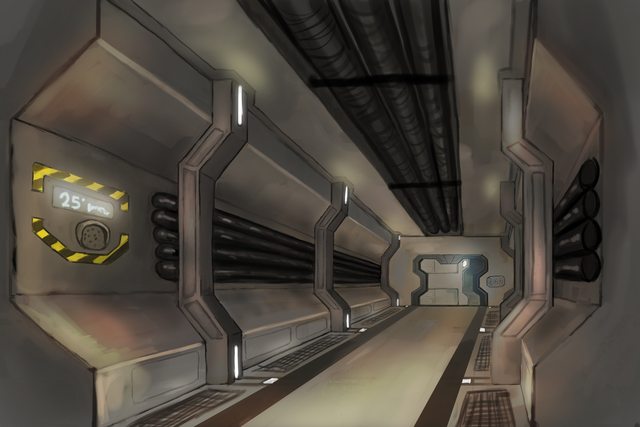 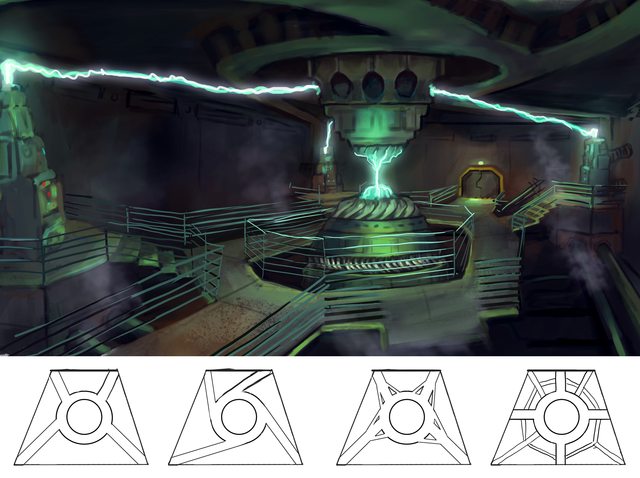 And finally, last but not least, let’s talk about the interface. We’ve received lot of constructive critics about how we can improve the gameplay and the player interface. This is the result of all those opinions. 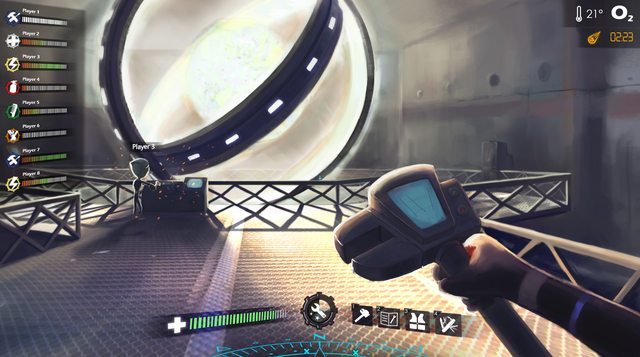 Now we will always have the temperature and oxygen level visible from the room that we are. We can also see our teammates’ HP and a compass who points towards the closer events. With all this new improvements we hope to solve most of the gameplay problems that we have detected. We will discuss in the future about objects and abilities.

We hope you like how this is going. If you have any suggestion or you want to participate in the closed alpha, you can contact us through this post or emailing us to info@ninjacodestudio.com.

The first Alpha Version of Space Crew has come!

Today is a great day. The first Space Crew’s alpha version is available for the use and enjoyment of everybody. We have added lots of technical and...

It’s been a while since our last announcement. We have been busy this month but we’re glad to announce that the first version of Space Crew is almost...

The first iteration of Space Crew is coming to its end. After a few weeks of bugs and hard work, we’re seeing the light at the end of the tunnel.

We talk about some changes (or discoveries) on the gameplay, new facilites for the player and the return of an old known enemy...

Yeah what is going on with development?

Is this still being developed?

amazing concept art!, i am looking forward to this!