Skylimit Tycoon is a management and simulation game where you build a complex that might end up in a skyscraper or a shopping mall. Skylimit Tycoon will be released as a single player game and you will be able to run different scenarios at various difficulty.

We have other day jobs as you might have read before, and the development has more or less been paused for a couple of months to get some insperation back. We have played some other games in the meantime.

It's more than 2 years ago since we started Kendanware and trying to find the right type of game for us to develop. The idea of Skylimit Tycoon come quite early, but we started to design a game that we after some months decided to redesign, since it should be possible to custom build all rooms in the building, but it would be very hard to build a complex with 1000+ unique rooms and you would never be able to complete your skyskraper or even 10 floors. Even though we've simplified a lot; the game is probably more complex than you think, only the source code is around 3MB, which equals about 5-6 books (250 pages each).

We have learned a lot over the passed two years, even though both of us are Java developers since many years back, but game development is different. We have written some minor games since 1999. We had to learn how to use the game engine, which in our case is JMonkeyEngine and also learn to do some 3d modelling, writing basic shaders, etc.

The first refactor of the graphics engine has been completed and merged to the main development branch. The new version is using an event system to retreive updates and we have managed to remove some multithread issues by doing the rewrite. We hope that we haven't introduced too many new bugs during the rewrite.

The sad thing is that it looks exactly the same as before the rewrite, so it's nothing new to show you.

Our next task is to do some refactor of the definition structure. There are more than 30 different kinds of definitions that describe items such as elevators, stairs, furniture, rooms, etc. We hope to be able to reduce the amount of definitions and also reduce duplicate code for rendering, validate placement, path finding and other tasks. We expect that it will take a couple of weeks to get it done, since it's a major rewrite. This means that we need to update all room definitions so it is possible to place rooms. We will also need to reimport all models in to the new structure.

It's a quite massive job, but it will be easier for us to maintain and quicker to develop a good editor, less code to optimize and less code write tests for, which hopefully will lead to a better game in the end with less bugs, 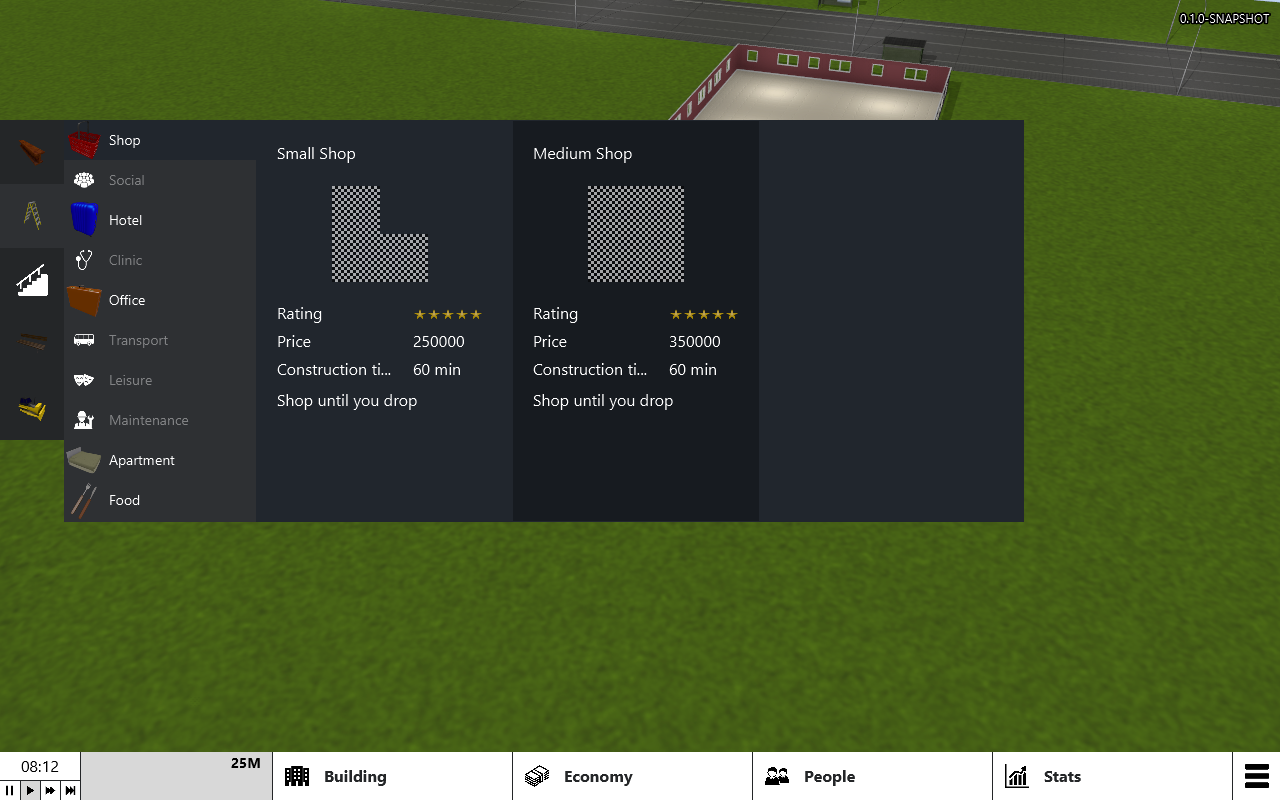 We've tried some different graphics styles for the user interface, but we've yet not found what we're looking for, so we will need to experiment some more before we are satisfied. We have tried more colorful generated 3d icons instead of just flat icons, but it is hard to get a UI that works from 1280x1024 to scale up to 4K and still have it to look good.

The challange continue, and we hope to get your support, since that inspire us even more!

The graphics engine has been redesigned and we have started to implement behaviour for people. Some additional models has been added for restaurants and...

New things in Skylimit Tycoon are the support for placing entrances and outdoor items. Implementation of the world economy has started and it's now possible...

Office and shop are two new room types that have been added to Skylimit Tycoon. The lobby light is now automatically adjusted as you expand your floor...

This is the latest that has been added to Skylimit Tycoon. The Mod Editor is now capable of importing and converting models. We have added animated escalators...

Love it, gonna follow that game :) Just make sure to make the gameplay simple and automated for redundant part and you gonna have an awesome game to play.

Btw if you ever get the time and knowledge, making the game 2 player or 4 player would be nice, like a fight between shopping center haha.

GG, it's reminiscent of SimTower on windows 95\3.1 which was one of my favorites, the same idea but first i've seen in 3D, do you draw inspiration from it?

Yes, we have been inspired by SimTower, but we didn't want to make a copy of it, rather evolve the game further.

Sorry, we have no final product and no beta testing started yet (we're still working on an internal alpha). You are however welcome to follow the project and come with suggestions if you like. You may do it here or at our site Hub.kendanware.com

Well, I have to say I'm a real sucker when it comes to tycoon games so I guess you got a watch from me :P Can't wait to see how this turns out.

Meditation And I Realistic Sim