Sha Cat - Free for your iPhone!

Jump into the role of a shamanistic kitty and battle through hordes of wicked creatures in an attempt to save her kidnapped boyfriend! Dress her up to enhance your Cat's Power! Meet friends along your journey to aid you in combat, through dark caves and spooky castles! Features: - Every action and reaction counts! Time your attacks wisely! - Suit up for action! Trade mushrooms for new clothes and accessories to expand your shamanistic powers! - Master the command of many Spells at your disposal to pave a way through the many exciting levels! - Enjoy a window to a unique, colorful world! Embark on an epic quest that will fill you with memories of the game's story! What is special about this game? Sha Cat is a casual, action role-playing game for girls and boys. Experience a rapidly changing difficulty curve that is sure to challenge anyone! Monthly updates are sure to bring forth new levels, and expanded story and enjoyable surprises! 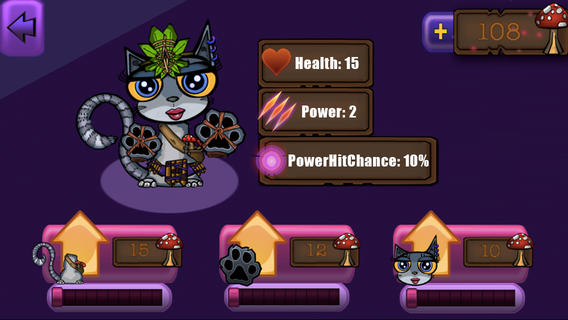 A new update just arrived.
Fixing some issues and changing some values.

or Android Version via
Amazon.de

Sha Cat's first update is here! Patch 1.1 extends the journey of magical Cat lady and leads her through a mystical forest and crystal dungeon to find...

“Every part of this game is perfect. From the soundtrack to the graphics and combat system you won’t be disappointed.” Octavian Ristea, appcomrade.com...

Sha Cat is Live! Download it for free now!

The game is here! Sha Cat is some kick-ass rpg Cat action. Download it now free for your iPhone.

12 days until Sha Cat is arriving for the iPhone! Jump into the role of a shamanistic kitty and battle through hordes of wicked creatures in an attempt...

It looks interesting. A gameplay overview in the summary would clear up a lot of confusion though.

Jeah I thought I added one but the screens must have been to big..
I did not yet figure how to change the summary..

Twitter
Tags
Embed Buttons
Link to Sha Cat - Free for your iPhone! by selecting a button and using the embed code provided more...