Sha Cat - Free for your iPhone!

The Sha Cat is coming! Jump into the role of a shamanistic kitty and battle through hordes of wicked creatures in an attempt to save her kidnapped boyfriend! Dress her up to enhance your Cat's Power! Meet friends along your journey to aid you in combat, through dark caves and spooky castles! Features: - Every action and reaction counts! Time your attacks wisely! - Suit up for action! Trade mushrooms for new clothes and accessories to expand your shamanistic powers! - Master the command of many Spells at your disposal to pave a way through the many exciting levels! - Enjoy a window to a unique, colorful world! Embark on an epic quest that will fill you with memories of the game's story! What is special about this game? Sha Cat is a casual, action role-playing game for girls and boys. Experience a rapidly changing difficulty curve that is sure to challenge anyone! Monthly updates are sure to bring forth new levels, and expanded story and enjoyable surprises!

“Every part of this game is perfect. From the soundtrack to the graphics and combat system you won’t be disappointed.” Octavian Ristea, appcomrade.com

Shat Cat is a really great game that levels the playing field for females in video games. Almost all of the popular games on the App Store, and even on Nintendo, involved a man saving his girlfriend or princess.This game changes all of that because the main character is girl cat that sets out to save her kidnapped boyfriend.

Gameplay:
The gameplay is similar to that of Pokemon. You keep advancing forward by defeating enemies, and eventually bosses. The combat system is really advanced though because it takes timing and reactions into account.Playing this game will keep you on your toes because you have to time shields, power ups, and attacks for maximum efficiency.After enemies are defeated they drop mushrooms which can be used to upgrade your character.

Mission Accomplished:
The graphics of this game will feel really odd at first, I know they did for me, but they became really enjoyable. I haven’t seen any other game with this style of animation or graphics but I would enjoy if there were more games with it. I wouldn’t mind if other games picked up the combat system Sha Cat uses either.Every part of this game is perfect. From the soundtrack to the graphics and combat system you won’t be disappointed.

Room to improve:
If you want to upgrade your character but don’t have enough mushrooms, you can purchase more. The only downside is that with a couple of in-app purchases of mushrooms and upgrades, you can overpower your character. Because of this, it would make more sense if upgrades had to be unlocked first. Then the game remains balanced even if you purchase mushrooms instead of earning them.

Conclusion:
Regardless of the fact that you can buy mushrooms in this game, you can easily complete it without making a single purchase. The style, humor, and equality this game brings to players makes it a must-have. Not to mention that it’s also free 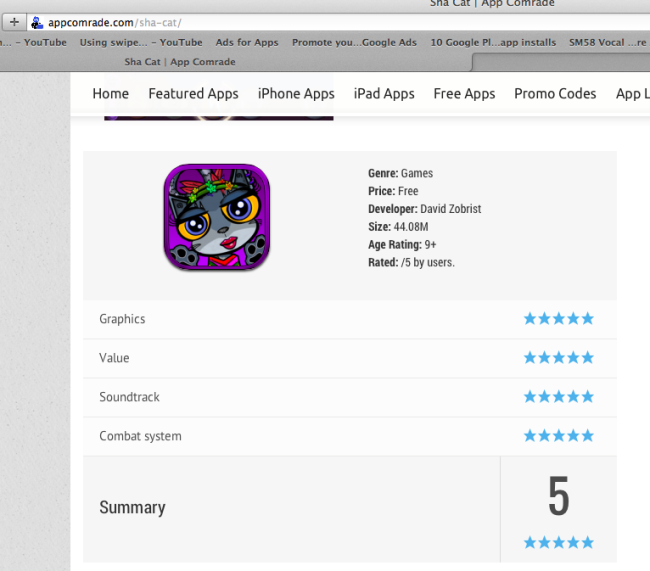