Descend into the Dungeon of Chaos, retrieve the Amulet of Yendor, kill all who stand in your way and return with your prize. 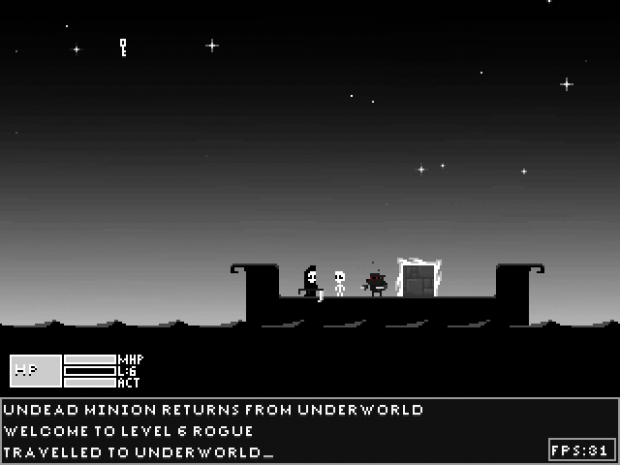 There are also big changes to the pace of the game. The content is now randomised in its introduction. Level 1 will always be the same and content is still introduced one at a time each level, but now the order is randomised within the zones. The zones are also shorter, leaving the left over content until very late in the game or until the next zone.

You can now sleep to regain health like in the classic Dungeon Master or Legend of Grimrock, helping you get further into the dungeon, if the monsters don't hear you make camp that is. Or if you don't suffer from nightmares the deeper you go...

When falling you now roll to smite on attacking (stacking with blessed weapon smite) - use those ladders! And when surrounded with a throwing weapon in hand you now do a dual-wield-whirlwind attack. Beware, the playing field is level, the monsters have these attacks as well now.

In addition to many other changes, the game now has a new home: redrogue.net (redirects are in place).

I hope you enjoy the new changes, they are not the last.

All of the core content in Red Rogue is now implemented.

More features added to the game, the list of things left to do getting shorter...

Just an update on the new content that's been added to the game.

I did a gameplay of it here Youtube.com

Played the game and i loved it, but I think it should be turned into more of a stealthy game.

i really like the sprites. i have a question though, will there be any colours besides whites greys and blacks? like sunsets and sunrises in the background?

one area is in full colour, that's all you're gettin

Probably one of the best indie games currently in development.

Great game, love the gameplay and the aesthetic! Any chance of a downloadable version?

When finished, yes. There will be downloads for as many OS' as I can support.

If you find game.swf at the url you can get the flash file and run it with a desktop Flash Player. This will give you full keyboard access in fullscreen mode (contrary to the warning).