Outlands is a new world, and a new journey.

Capture beasts, explore, meet new friends, and challenge enemies. Train your beasts to be the best and defeat all the others!

The child of farmers, you start your journey being tasked to save your village from ruin. Travel to the city and capture and train beasts along the way. The city holds the tournament where glory and riches are bestowed to the victor. But what challenges and hidden secrets will keep you from becoming the best?

- Combat -
Outlands features an intuitive real time combat system that puts the focus on player skill rather than game time logged. Action based combat allows new players to jump right into the action and veterans to test their skills.

- Training -
Beast tamers will be able to raise their beasts, grow their friendship, and test their bonds in battle.

- Skills -
Beasts all feature a skill tree. Unlock powerful attacks by leveling up, and questing. Then buff your favorite attacks with permanent boosts to make them even stronger.

Hi guys,
So Kloen's had all the fun updating you guys on the game for the past few weeks! Up until now most of the art has been behind the scenes finessing the attacks (I'm sure you've all see the gifs!), fine tuning the animations, and piecing together reference material to create a cohesive style.

But now it's really exciting because we are starting to move past that initial preproduction phase into areas that are a lot more fun and exciting to show off!

A lot of prototyping is going on in the coming weeks of various effects and area implementations and hopefully we can give you some thrilling peeks at what we are up to. First off is a prototype of gust: 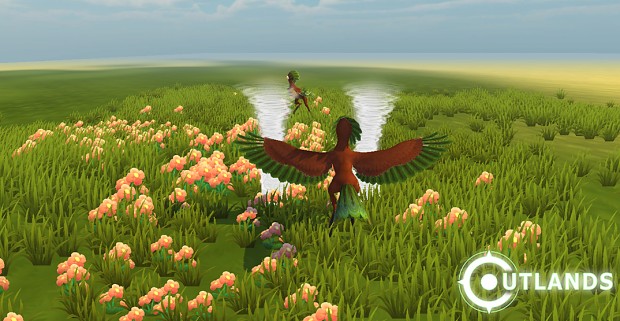 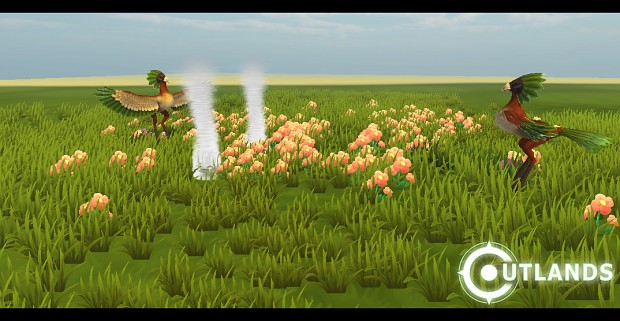 Basically this attack creates two tornadoes inside Ortia's wings, who then sends them hurdling towards his enemy where they will converge to create a knockback effect. Just hitting one tornado will deal a small knockback while hitting both will deal a larger knockback.

This is primarily a defensive attack as it doesn't deal any damage and pushes the affected targets farther away from the player. Right now only Ortia is able to use this attack, but as more winged beasts make their way into our menagerie you may see gust rear its head again!

We know you guys are eager to toss in your input at this point! We'd love to hear what you like and dislike, but bear in mind that things may play differently and certainly things will be quite different once you get your hands on it!

Hopefully in the coming days I'll have more exciting tidbits to show you guys! Thanks for reading,
-endie

This is the first version of the Outlands Game Tools app, it includes the Language Manager. Now you can help us localize the game!

Here is a little preview of the Language Manager Tool.

Since we want that the game supports all the languages as possible because everyone want to play a game on his native language. We make a little tool...

This is the first verion of the Outlands Game Tools app, it includes the Language Manager. Requires Java 7 or higher.

This game is dead isn't it?

Dude you are awesome. Good luck with your studie <3

Is this still ongoing? cause you guys haven't been posting anything new in a long time.

This looks quite interesting from the description. I think this could definitely be a fun game. I would like to see more screenshots and maybe a video? but good job!

Anything new to be seen?

Really curious how this turns out. You already have nice materials. Will be watching this project. :)

aw man you guys don't post every picture on here, now i gotta follow all of your twitters too... I follow you Endie but who else is on the design team?

Like kloen said the major updates get posted here. I do post smaller WIP and sneak peaks on twitter just because it's a bit faster for small updates. If you want to see the newest minor changes and updates ASAP you should follow us. But if you only follow this indiedb you wil still get all the necessary info regarding updates and features.

I now follow all three of you guys :) I love seeing your WIP... quick question tho; is it really only the 3 of you, nobody else is on the team?