Big Brother has arrived - and it’s you. Investigate the lives of citizens to find those responsible for a series of terror attacks. Information from the internet, personal communications and private files are all accessible to you. But, be warned, the information you supply will have consequences…

Orwell is a new governmental security program that has the power to survey the online presence of citizens and access their personal communication and technology devices. But to successfully profile suspects and protect the privacy of citizens, Orwell needs an impartial human researcher—someone operating outside of the Nation who can interpret relevant chunks of data and make decisions when conflicts arise.

Selected from thousands of candidates, you have been chosen as Orwell’s first human researcher. And when a terror attack rocks the Nation’s capital city of Bonton, Orwell is immediately put to the test.

Required to investigate the web pages, blog posts, chat messages, files and private information that Orwell retrieves and serves up, you will help the Nation create personal profiles of suspects and uncover the perpetrators.

But are these people really terrorists? What does the information you reveal to Orwell say about them? What if you find out things about them that not even their loved ones know? What is the real price of maintaining the security that the Nation is yearning for?

Determine the relevance of information. Only the information you provide will be seen by the security forces and acted upon. You decide what gets seen and what does not and influence how the suspects will be perceived.

Secure the freedom of the Nation. Find the terrorists so the citizens of the Nation can sleep safe, knowing Orwell is watching over them.

You need to return to service! You may now play Episode Five of Orwell, titled "Under the Spreading Chestnut Tree". If you already own the game your Steam client should update the game automatically. If it doesn't, check the game's properties whether auto-updates are enabled. 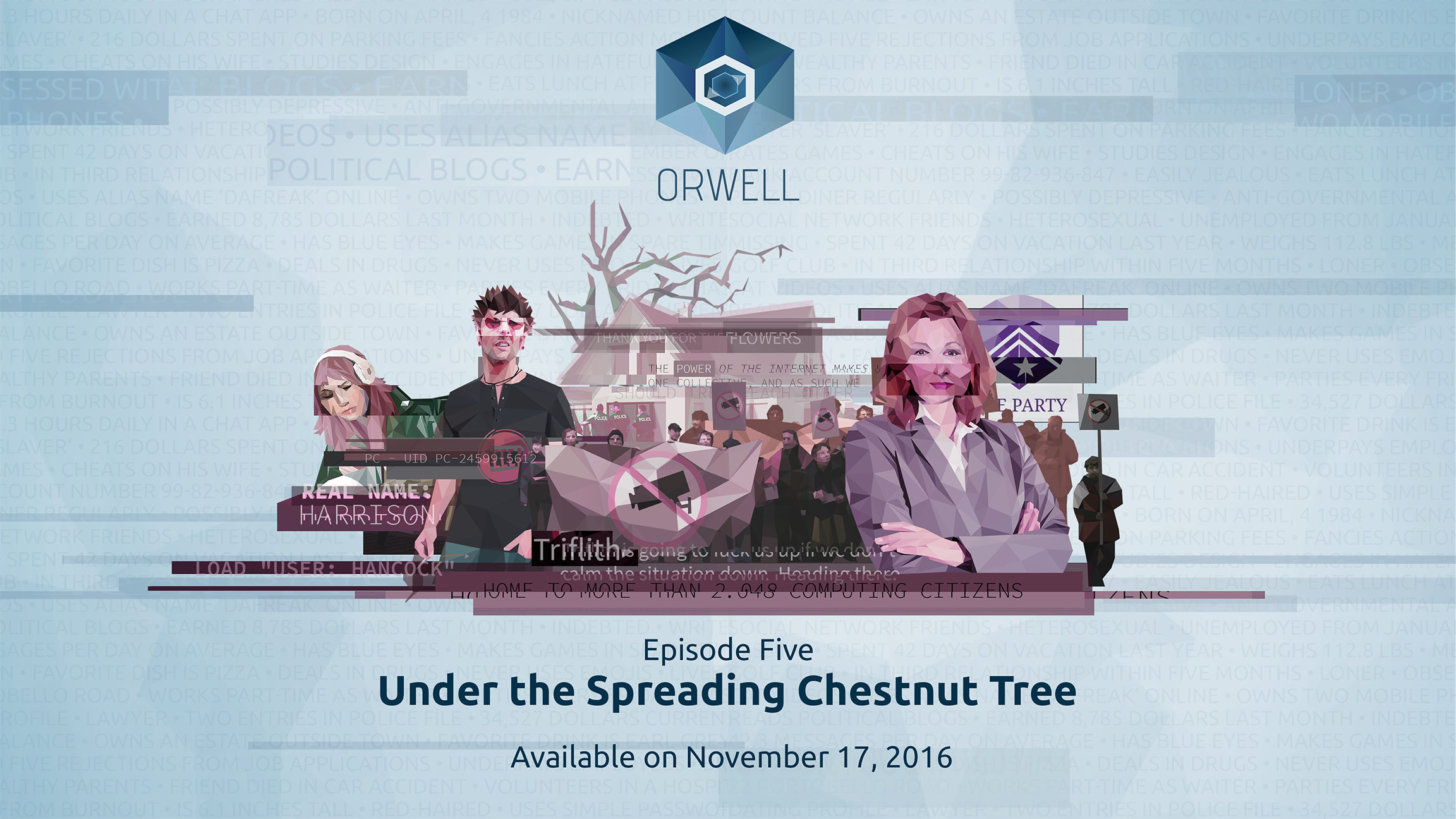 In the wake of the drastic events of last week, you will need to confront the remaining members of Thought directly. This concluding chapter will reveal the answers you have been looking for, while raising one more important question.

This is the final episode, and thus concludes our weekly release schedule! We want to thank you all so much for joining us on this wild ride. Reading all of your comments, theories and questions has been utterly amazing, and filled us with so much joy! Now anyone who plays Orwell will be able to binge just like a new release on Netflix, but together we experienced something truly special.

What's next? We're all going to be in here answering your questions and responding to any issues that may arise, and then we're going to take a few well deserved days off. After that we'll be working away on a Mac version of the game!

On behalf of everyone at Osmotic Studios, and Surprise Attack Games, I would personally like to thank each and every one of you who has played the game, talked to us on Steam or Discord, joined us at PAX or Gamescom, and recommended our game to friends and family. You guys have been an awesome community, and I look forward to talking about Orwell, and all of its twists and turns.

Have fun, and as always, stay vigilant!

Investigators, You need to return to service! You may now play Episode Four of Orwell, titled "Memory Hole"! If you already own the game your Steam client...

Investigators, The time has come to return to your job! The third episode of Orwell - "Unperson" - is now available! If you already own the game your...

Investigators, Once again we call upon you! Today we release the second episode of Orwell - "A Place where there is No Darkness". This also marks the...

Big Brother has arrived - and it's you! Orwell launches today with free episode!

Orwell has arrived on Steam and Humble. First episode released as a free demo right here on IndieDB!

This demo is the first episode of Orwell. There are five episodes in total and they will release weekly on the schedule detailed below. Purchase the game...

Thats an interesting game, I'll think of make some content of the demo if its enough material for it. Also I look forward what is with the episodes, sounds interesting to see some story in a mechanic game like that.
:)

To whom it may concern,

Hello there im just writing you here to ask if you have a contact email i can grab to have a short interview with you about your game for our site, i just finished playing through your demo you have out and thought it was a wonderful game and would love to do a written and video piece on it.

you can email us here at Spotlightgamesreview@gmail.com, i look forward to hearing from you.

Thanks for playing the game. You can contact us via press AT surpriseattackgames DOT com and we will help you out on Monday when we are back in the office - Steve