The Oort cloud, a vast resource of danger.

In the future, human numbers will reach into the trillions. To deal with this we have found many clever ways to harness our environment, including the earth, and the solar system.

We have established colonies on just about all planets, and anything that you can land a ship on, however it wasn't enough. We have also reached out into the outer asteroid field known as the Oort Cloud, and virtually hollowed it out.

We even figured out how to use that space to our advantage by using advanced ai to create farms within.

It worked quite well for a time, but as most stories go, that would change. 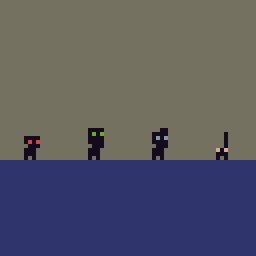 You play a technician assigned to general maintenance of machinery in the Oort project. That is until the robots take on a will of their own.

Unfortunately you are the only one who can deal with the problem since it's so far away from everything else. However the powers that be saw fit to equip you with a battle system that can be upgraded, for a price.

Your opponents are the former workers from the asteroid field. They have varying speeds, health, and attacks, so you must use some strategy to defeat all robots in each rock. You will not get any credit if you don't.

Speaking of strategy, you can use those credits to increase your own speed, number of boosted jumps, weapon range, and hit percent.

Press the x button in the left corner

wad to jump, and move

First touch makes your character go left or right(touch below, and right of character moves right, left moves the other way)

Touch above the character to begin attack.

Analog left side for left or right.

To promote Oort Uprising and grow its popularity (top games), use the embed code provided on your homepage, blog, forums and elsewhere you desire. Or try our widget.

This is my attempt to make the best unofficial Sonic game possible. Sonic Time Twisted borrows a few elements from Sonic CD including time travel to make...

DARTHY is a Simple Pixel Platformer based on old school mechanics.

Ayla is a causual 2.5D platform and puzzle game designed for platforms like Xbox Live Arcade, PlayStation network and Steam. The Gameplay focuses on gravity...

Side scrolling platformer, placed in 3 different worlds each with 5 levels. Your goal is simple, beat them all! There are rocket launchers, zombies and...

NSI: Operation Zero is an action platformer with stealth elements set in a cyberpunk world of the near future.