Me And My Dinosaur 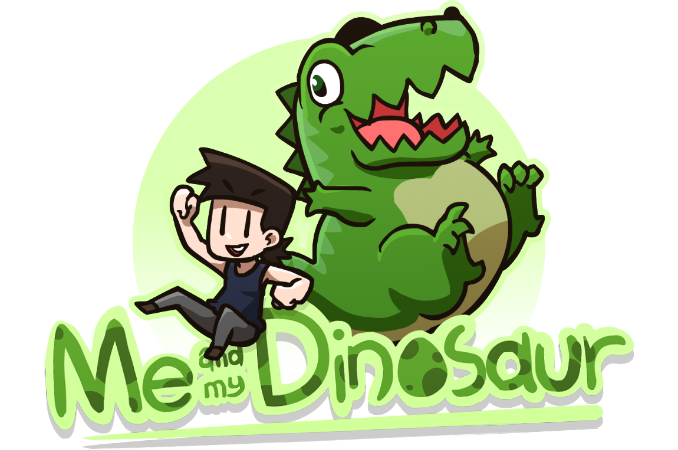 Me And My Dinosaur is a 2D puzzle-platformer that invites you to join Hunter and his pet dinosaur Rex as they explore a fantastical, sometimes dangerous world. With its breathtaking environments, strange creatures, and perplexing puzzles, Me And My Dinosaur recounts the timeless story of a child, their pet, and the unbreakable bond they share.

When Hunter moves to the city of Commonsville from his small hometown of Sumtown, his life is turned upside down. The school is different, the people are different, and try as he might, Hunter can’t seem to make any new friends.

But when he discovers a mysterious egg in the forest behind his new house, Hunter learns that friends can come in many shapes and sizes.

But not all the residents of Commonsville have friendship on their minds. Hunter’s parents don’t understand Rex and Hunter, desperate to keep his only friend, runs away with the hopes of returning to Sumtown.

And when word spreads that Hunter has found a dinosaur, the shadowy figures at Bioneer Labs quickly set into motion plans to capture Hunter’s newfound friend.

What sinister plans does Bioneer Labs have for Rex? And who is the young, oddly-dressed girl Hunter keeps seeing lurking in the shadows? These mysteries and more will be solved as you join Hunter & Rex on their grand adventure!

The story of Me And My Dinosaur unravels over 30 levels in its Story Mode, which can be played solo or with friends using the game’s drop-in, drop-out local co-op feature.

The majority of the puzzles of Me And My Dinosaur revolve around the game’s multiple characters and their various skills & limitations.

At the outset of the game, Hunter is capable of climbing on Rex’s back to avoid obstacles & enemies, he can move objects, and he can jump. Rex, while being completely invulnerable to damage, is unable to squeeze into smaller areas and cannot jump.

Using this information, we formulated the puzzles to exploit these strengths and weaknesses. We strove to design puzzles that would guide players through the various phases of puzzle solving: experimentation, identification, and application. We also wanted to give players a chance to explore puzzle mechanics in a variety of different scenarios, so that successfully solving a puzzle feels both natural & rewarding.

As the game progresses, the puzzles increase in complexity. To achieve the optimal difficulty curve, Me And My Dinosaur gradually introduces novel puzzle elements in the form of environmental obstacles, interactive objects, and perhaps most importantly, Dino Treats.

The Infinibone is a magical bone that allows Hunter to guide the ever-hungry Rex through the world. When you need Rex to follow you, just drop an Infinibone and he’ll sprint towards it.

Jumping Beans are nearly indigestible for Rex. Encountered a ledge that Rex can’t reach? Feed him a Jumping Bean, pinch your nose, and watch as his explosive toots propel him upwards.

Pyro Peppers are a variety of extremely spicy peppers. Keep getting tangled in creeping vines? Feed Rex a Pyro Pepper and he’ll belch up a potent fireball, scorching everything in his path.

Hunter also has access to other non-Rex-specific items that will help you solve puzzles in areas Rex can’t enter. Rocks can be collected & thrown to activate switches, and bombs can be placed to destroy blockades.

While most people would agree that Bioneer Labs is an undoubtedly evil organization, there is no denying that they have made tremendous breakthroughs with recombinant DNA. The scientists at Bioneer Labs have perfected their genetic splicing technique so as to extract the most evil aspects of various animals and plants and blend them together to create fearsome monsters. As such, the world of Me And My Dinosaur is peppered with all sorts of strange & dangerous creatures.

Tucked away in the hidden corners of Me And My Dinosaur’s levels are collectable Dino Eggs, each containing an adorable Baby Dino for you to hatch, raise, and train in the Dino Daycare.

In order to level up your Baby Dinos, you’ll need to feed them Dino Chow. At each level, your Baby Dino will crave a different type of Dino Chow. Depending on whether they are herbivorous, carnivorous, or omnivorous, they may want to munch on a mound of meat, tuck into a tasty tomato salad, or snack on a sweet snow cone!

To find ingredients to craft the various different types of Dino Chow, you’ll need to play one of three dinotastic minigames in the Games Room.

Feed the Baby Dinos until they reach the maximum level and you’ll unlock a special hat accessory to customize your prehistoric pals!

All of the artwork of Me And My Dinosaur has been painstakingly animated frame by frame. To support the storybook narrative, we opted for a bouncy, cartoonish style with vividly colourful environments and a cast of unique and quirky characters.

The levels of Me And My Dinosaur explores many video game location staples: you’ll sprint through busy city streets, crawl through dark caves, scale the ruins of an ancient civilization, tiptoe across lava flows, and slide across icy slopes. 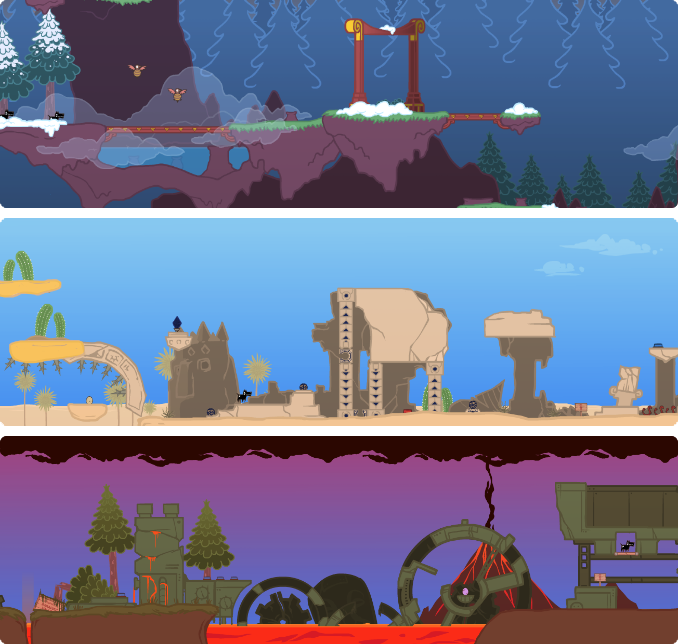 Me And My Dinosaur features a bouncy, spritely soundtrack that reinforces the whimsical qualities of game’s story with its strong, memorable melodies. With over 40 musical tracks, overlays, and musical stings, the game’s soundtrack fully immerses you in the adventure.

For the sound effects, we’ve brought on Dave Chan as our lead audio expert. Dave’s worked on amazing games in the past including Star Wars: KOTOR & Mass Effect.

To reinforce the storybook narrative of Me And My Dinosaur, Joshua Tomar will be reading the game’s script with his sweet, dulcet voice in a manner similar to that of a parent telling a story to their child. 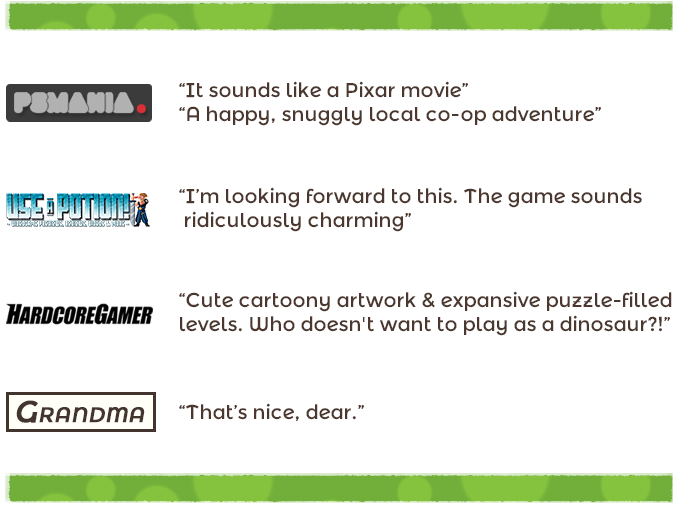 Me And My Dinosaur on Kickstarter!

You can now go to our Kickstarter page and choose from any number of awesome rewards to help support the game’s development. When you contribute to the campaign, you'll get access to exclusive Kickstarter only updates that will reveal more about the world, gameplay, and characters of Me And My Dinosaur.

Also, in order to help bring Me And My Dinosaur to PC and Mac, we’ve launched a Steam Greenlight campaign today as well! Make sure you go give us a ‘Yes’ vote with your Steam account and share the page with your friends and family!

Finally, we’ve launched a brand new, shiny Me And My Dinosaur website with more information about the game and some snazzy new graphics, so go check it out!

Me And My Dinosaur Has Been Greenlit!

It’s been an overwhelming and hectic couple of weeks for us here at the MADSOFT Games office, and it’s only going to get crazier as we head into the...

This is adorable haha 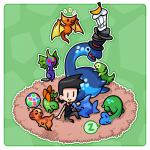 Tags
Embed Buttons
Link to Me And My Dinosaur by selecting a button and using the embed code provided more...

So Many Me Platformer