Deep down, we all love good graphics despite assuring ourselves that, no, it’s the gameplay that comes first. Still: A coherent art direction makes a shitty game at least bearable, elevates a mediocre title above the rest or makes a good game great. LUFTWIDERSTAND falls in the former category of being a mediocre game but since it’s my first I’m cool with that. Still that won’t keep me from trying to make it as good as I possibly can. Which brings us to tonight’s word:

FEATURE CREEP
Last time I told you that I was toying with the idea of implementing some diet RPG elements into the game and I’ve received very positive feedback every time I uttered these thoughts (although not at McDonald’s but that’s a whole different story). So I thought I get my hands dirty and right away and rip open again the patient fresh from surgery that is my game.

And since that’s a pretty big and critical task to implant some pounds of new mechanics without hurting all the other still healthy organs in it is a rather hairy task, I did what every one-person game developer and unlicensed basement surgeon does:

PROCRASTI-MMING
I wasn’t quite procrastinating but also not really doing some trailblazing programming but something in between, as my change notes reveal. I updated the sprites, rewrote some big portions of code and added new visual features entirely without adding much or anything at all to the core gameplay. I still got the samey old enemies and spawning behavior as in alpha 0.0.17 (and currently I am in alpha 0.0.22). But hey, what the game now lacks in new gameplay it really makes up in zazzy graphics! Here’s an excerpt of my change notes:

Below you can see the evolution the graphics wen through so far from alpha 0.0.17… 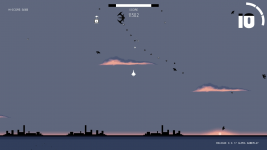 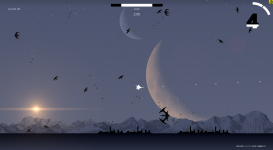 So a lot went into improved graphics and memory optimization to fend off the looming RPG-implementation. Why? Because of this familiar situation: Malcolm in the Middle - Hal fixes kitchen light.

Essentially this means for me that I need to know how long the game will be in terms of stages, bosses, variety, etc.. This means I should come up with a good narrative framing or, even better, a backstory that carries the game yet makes the game design decisions seem natural and straight forward. It also means that I need to some practical stuff like designing and coding the GUI overlays for the leveling-up stuff (and you probably can guess how much I “enjoy” coding GUI stuff). I mean, it’s bearable but I already see heaps of changes for it on the horizon and haven’t had the nerve to put up with that and just dig in, plow through and fix bugs later. But soon there will be the day where I pick it up.

Speaking of trying to avoid the inevitable: I started with messing around with trixles for the mentioned UI overlays recently and we’ll see how it goes from there. Basically I am thinking of the GUI of “Skyrim” along with “Gradius” gets trapped in a blender and an chopped up, so here’s a little draft. 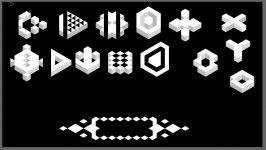 PLAYABLE ALPHA?
Because the gameplay didn’t change much at all I won’t be compiling and uploading a playable version for y’all. If some of you still want to play with the nice graphics as featured in the latest video, well, maybe I can be convinced to do it. But no request, no alpha.

Oh right, because Luftrausers clearly invented that kind of gameplay.

Games of this type have been around for ages!

Here are just two examples:
Youtube.com
Youtube.com (sopwith is probably the oldest one, released at 1984)

So please know the background before ranting about such things.

Name, type of graphics, type of gameplay... It's the overall picture and it is staring you right in the face.

Thanks for your concerns. Yes, I was inspired by Vlambeer’s Luftrausers but also from classic games like Defender and Asteroids and plan on adding RPG mechanics to make things more interesting, as I mentioned a couple of times.

It's ok to get inspired, especially since no one can make something out of nothing. We all use things that inspire us. Hell the projects I work on are odes to what I respect and each point can't claim to be original.

But seeying you using this type of name, these types of graphics and the same kind of gameplay(watching the movies), I would dare to say you are doing that on purpose and it's a shame for all the other interesting ideas you are planning to throw in.

I would advice you to at least change the name and try to make a bigger change in graphicstyle.This will increase the ammount of help/respect you will get for this project ;).

looks a lot like luftrausers indeed, but im curious as to where this game is going. looks good though ;)