Ironguard is a fast-paced roguelite shooter with procedurally generated levels and a wide array of unique weapons and items.

For Ironguard, we tried to focus on making our weapons and items fun and interesting; we've foregone the usual roguelite approach of having a single, simple weapon which is buffed over time with a variety of passive stats & effects. 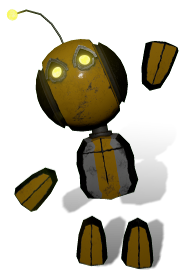 It's been a while since we posted an update but we've finally got something to share. Over the past few months we've been hard at work on our next release: a first-person roguelike shooter named Ironguard.

We're still in the early stages of development at the moment, but we've released a video and some screenshots showing some Ironguard gameplay in the first stage of the game: the Foundry.

We'll be posting regular updates to our twitter channels @AegonGames and @IronguardGame from now on with a weekly spotlight of one of Ironguard's weapons or items.

Another quick look at the weapons in Ironguard - this time we're checking out the Chakram, Flamethrower, and Plasma Shield.

A quick look at the weapons in Ironguard - starting with the Scatter Blaster, Beam Rifle, and Grenade Launcher.