I'm Gonna Be God of The Forest

A very unique strategy game that is hard to define but is most similar to Tower Defense games. You are in charge of managing a complex ecosystem in order to protect yourself from evil machines come to destroy your forest. Grow stronger creatures and organisms by 'culling' weaker ones in order to fight for your Forest!

Oozy is one of the slower creatures in the game although it is still very useful. Just like Ellyps it is one of the first stages of evolution from a Dot egg. So along with Ellyps it will be your first line of defense in many cases as they are the first offense capable creatures you will create.

It will gather around both Shrubs and Trenches as they are it's primary food source. Since they can attack from a distance they are very useful in large groups as a support unit. 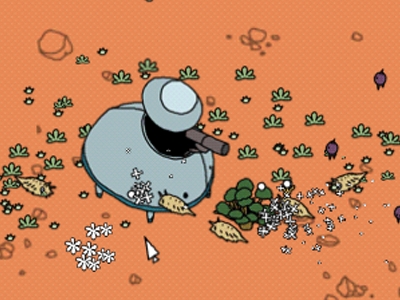 It actually looks exactly like what I thought a Yeerk looked like as a kid...minus the eyes of course!

Rex is a large carnivore that evolves from the Ellyps egg.

One of the creatures that can evolve from a Dot egg.

At the very bottom of the food chain, Dots only live to eat Shrubs and lay eggs. They are the workhorse of your army!

Check out the original Japanese trailer for the game.

yo this rocks. just sayin

I played the demo too during the last Tokyo Game Show, and it was fund. Might purchase this one if the price is cheap...

I actually played the Japanese version without understanding a word! :D
Nice game concept and art style, just the music takes getting used too... LoL

Ecosystem simulators tend to be quite interesting, and what a lovely art style! Tracking!

Tags
Embed Buttons
Link to I'm Gonna Be God of The Forest by selecting a button and using the embed code provided more...