Garden of Ants (GoA) is a platform independent real-time strategy written in Java. The game simulates a living strategy of hypothetical ant species (it is mainly inspired by leaf cutting ants - Atta). The environment is situated to the soil where the colony is developed and where is an infinite space for expansion.

It is possible that the game is running without JRE8 but with high risk of freeze or fall down, therefore it is recommended to install it!

P.S.:For Linux users there is short tutorial how to install JRE8.

To run the GoA just unpack a zip file to desired directory and double click on "goa.jar" in unpacked folder.

To run from the command line use:

Goals of the game 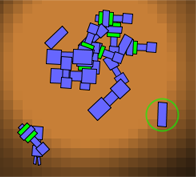 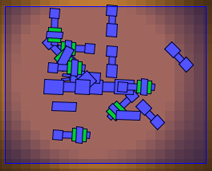 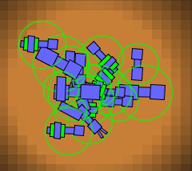 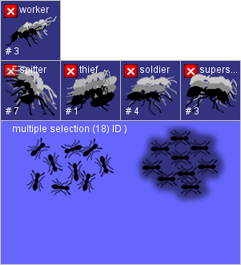 Multiple selection
You can select multiple ants by dragging left mouse (or using the shortcuts - see below) and choose group of desired caste by clicking to icon above right selection panel. You can also deselect any group of caste from selection by clicking to red cross button on caste icon above right selection panel. Or you can also deselect all of the selected ants by left mouse click to floor or ground without ant(s). You can move the selected ants to desired place by right clicking to excavated area. 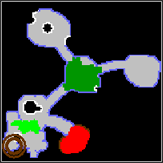 Minimap (top-right panel) shows the explored area where enemy rooms (fungal gardens, aphids grasslands are symbolized by red color) and your fungal gardens are green. Positions of events in explored area (soil digging, player invading, attacking or killing ants) are highlighted by circles with specific color. You can switch the screen to desired position by right click on minimap. 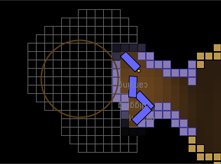 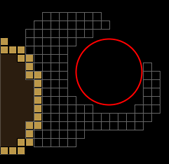 If there is no ant selected and the cursor is moved to excavated soil digging tool will spears. Clicking or dragging of right mouse you can mark the soil which you want to dig out. When the area of soil is marked workers automatically start to dig. Digging the soil is the way how to expand your living area and how the most of the grains are generated.To remove the part of the marked soil you could press the "Ctrl" when you move over the marked area with the dig tool. Deleting tool has red color.

You can change the speed of the game by buttons on left-bottom panel.

Life cycle of the Ants 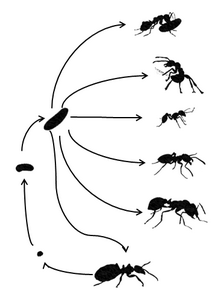 The life cycle of the ant consists of four stages: egg, larva, pupa, and adult. Fertilized eggs produce female ants (queens, workers, or soldiers); unfertilized eggs produce male ants.
Egg: Ant eggs are oval shaped and tiny (they are on the order of 1 mm long, but the queen's egg is many times larger).
Larva: The worm-like larvae have no eyes and no legs; they eat food regurgitated by adult ants. The larvae molt (shed their skin) many times as they increase in size.
Pupa: After reaching a certain size, the larva spins a silk-like cocoon around itself (against a solid object, like the wall of the chamber) and pupates. During this time the body metamorphoses (changes) into its adult form.
Adult: The pupa emerges as an adult.

Queen cast is the most important in the colony. She could establish new fungal garden. When the garden is established she lays eggs depends on sum of gardens sizes. Garden without queen became abandoned and could be colonized by another queen. When all queens are dead colony will die out.

Eggs are produced by queen and larvae are born from them.

Larvae can be transformed into different castes depends of reached colony progress and size of fungal garden.

Workers are the fundamental units of the colony. They are digging the ground and harvesting nourishing grains from the soil or from the aphid grasslands. Grains serve as food for the fungus and allow the fungal garden to expand. In some cases they can attack the enemy ants but they are quite weak fighters.

Soldiers are basic assault units. They can attack enemy ants or patrol at some place to defend a part of the nest. They are fast but not so strong as major-soldiers.

Major-soldiers are strong and resistant warriors but they are quite slow. They can also attack enemy ants or patrol at some place to defend a part of the nest.

Acid-spitters are quick as solders but little weaker. They can squirt drops of formic acid and thus they can attack on longer distances. For that ability they are especially suitable for defending a part of the nest by patrolling there.

Thieves are the fastest ants. They are not able to attack enemy ants but they can steal foreign pupae and bring them back to their maternal colony. Ants from stolen pupae belongs to ant colony where the pupa maturation is finished. 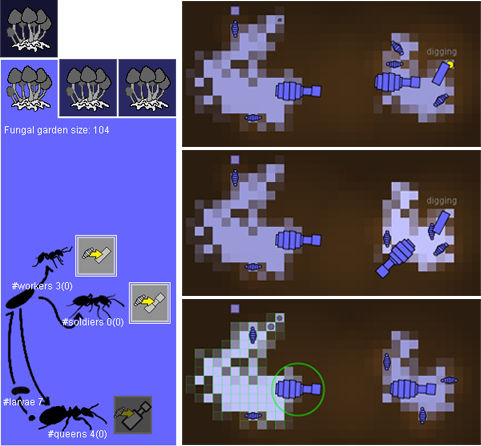 Most important parts of the colony are the fungal gardens. Fungus is inoculated by ant queen and is fed by grains collected by workers. Fungus serves as food for the ants, regenerates them and the total area of the gardens determines size and progress of the colony. Queen remains on the garden and starts to lay egg depends on actual garden total size. Every queen can established several fungal gardens but colony garden became the garden where is at least one queen. When the queen move to another garden or die garden became abandoned and there is no more contribution to total colony progress of such a garden. Abandoned fungal gardens being slowly decomposed since another queen occupy them.
When new larva is ready cast buttons on left panel became active depending on the progress of your colony. Clicking on them by the left mouse you should convert one larva to desired cast or by the right click you can permanently select the cast to be produced. This permanent selection will be discarded when dependencies as colony size of progress drops under the limit required for desired cast.
Selected fungal garden is brighter and highlited on minimap by "lime" green.
When ant is selected his parental fungal garden is marked by green grid.

Aphid grassland is an area where aphids live and secrete sweet grains. You can harvest these grains by workers skill carry.

Allow to attack specific living object.
Usage: Left click to icon and then left click to living organism which should be attacked.

You can specify the area where selected workers will dig preferably.
Usage: Left click to icon and then left click (or multiple clicks) to desired place where soil should be excavated.

Allow ants to patrol at some position. It is good for guarding the access path to your colony or queen pupae especially with acid-spitters.
Usage: Left click to icon and then left click to place where selected ants should patrol (excavated areas only). When you holding "Ctrl" you can select multiple points and ants will circulate from one to another.

You can set the source of enemy pupae (enemy garden) for the thief/thieves. Thieves are going to steal automatically until garden belongs to enemy ants.
Usage: Left click to icon and then left click on enemy ant fungal garden.

Are you still working on this game?

Yes :) There was little break, but now I started to rewrite the whole engine to client-server based to set up the multiplayer in proper way. The new results will come soon...

Indie
Tags
Embed Buttons
Link to Garden of Ants by selecting a button and using the embed code provided more...