When hipsters turn themselves into zombies and haunt the living it's time to fight back. Ironically.

Fight against legions of pretentious undead in this light-hearted arcade action game.

Available for iPhone, iPad and Android

At night the hipsters leave their hiding holes to shamble towards you looking for brains. Brains and vintage clothes. Now it's your job to stop them from infecting and plundering your neighborhood. Granted, it's not that bad a job if you ignore the lethal risks. After all you get to frag some zombies.

Crossposted from the Sharkbomb Studios blog.

I hope you like numbers, cause this article will be chock full with the beasts. Not only that, there will also be graphs! I’ll be looking at the performance of Hipster Zombies over the entire lifetime. That includes, among other things, downloads and revenue for iOS, Android, Ouya and Samsung Apps. 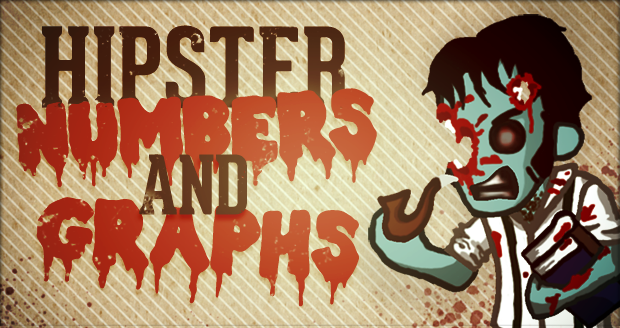 Let’s start from the beginning:

We decided to try our hand at one of these fancy soft launches. To that end we silently released Hipster Zombies on Google Play. The game went live on the 10th of March in Austria (as a test for Germany) and Canada (as a Test for the US). It was on for five days before we launched for real.

Here’s a look at the downloads during that time:

As you can see there was only a single download during that time. From an Austrian account no less. To be honest, we expected a bit more downloads and attention, simply from being new in the store listing, yet that did not happen.

Instead of some downloads, we got something else though:

Even before we released Hipster Zombies on the 15th we already had pirated APKs flying around. Obviously that was from that one Austrian, who grabbed the soft launch copy, presumably just to crack and distribute it. So pirated before release? Achievement unlocked, I guess. So we were off to a good start but how did things develop from there? 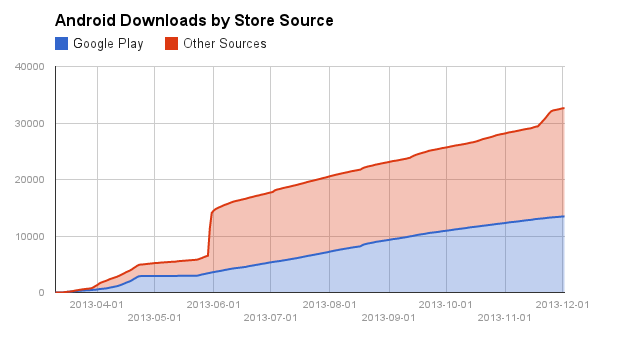 This is a graph of all downloads on Android seperated by marketplace. The blue set are all downloads that went through the Google Play Store, the red are all those that did not have a marketplace set. From what we can see they represent the pirated copies.Oddly enough there’s one huge spike from the 30th to the 31st of May. We have no idea where it came from but that was about 2500 downloads in a single day. We also had pretty good growth with the pirated version, probably because we were in some nice, exposed spots on the apk piracy websites.

Regardless, what you can see it that piracy makes up about 50% of our total Android downloads. Looks scary but we don’t really feel like we’ve lost much revenue there, especially since we’re a free-to-play title. If Hipster Zombies was an upfront payment app we’d probably feel different.

But where did all these pirates come from? 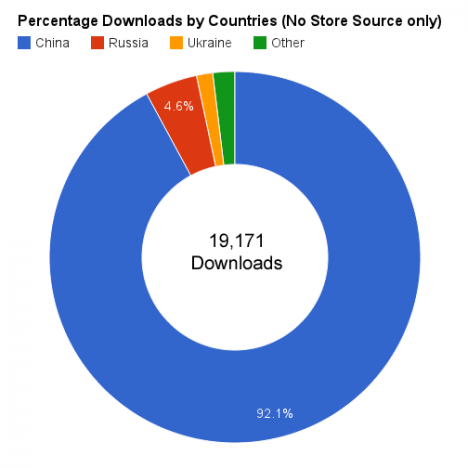 As you can see most of them come from China. We’re assuming that part of that is because the Google Play Store is not available in China and there is simply no other way to get Hipster Zombies ;)

So on to more positive things. How did we actually do in terms of legal downloads? The following graph gives an overview over the total lifetime downloads of Hipster Zombies so far. As you can see we released Android first, then iOS, OUYA and finally on Samsung Apps. 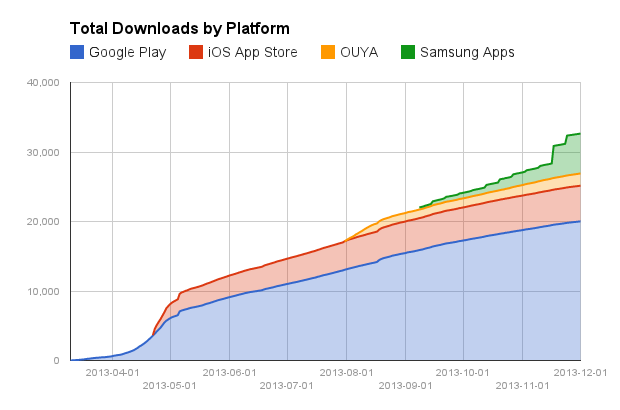 The graph does not represent uninstalls but you can clearly see the launch effects. It’s a bit difficult to read from this graph but the iOS launch effect seems to be a bit more pronounced but not to hold on as long. What is evident though is that Android makes up the majority of our total user. Here’s a closer look: 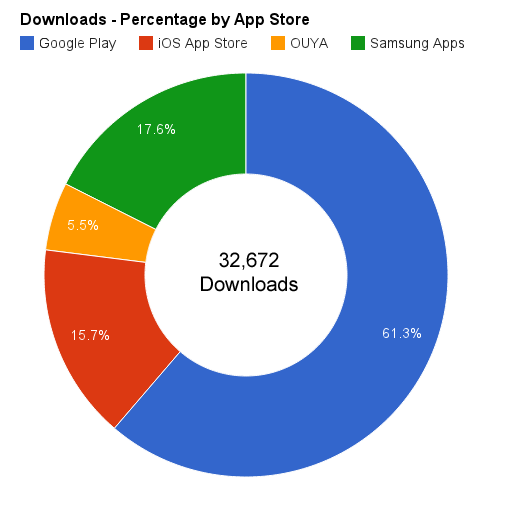 So we had downloads, but how did people like the game?

One of the good things on mobile platforms is the ease with which users can review and give feedback. Granted, there’s often lots of frustrating feedback but it’s nice to get a feeling for how well your game is received. 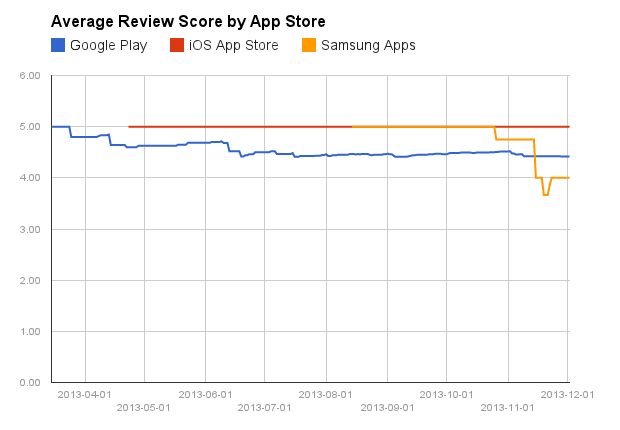 So looking at the average review for the Google Play Store we end up at around 4.5 stars after a total of 160 reviews. That’s pretty satisfying to us. The 5.0 rating on iOS should be more satisfying but considering that it comes from only 5 reviews, that’s by far not representational. 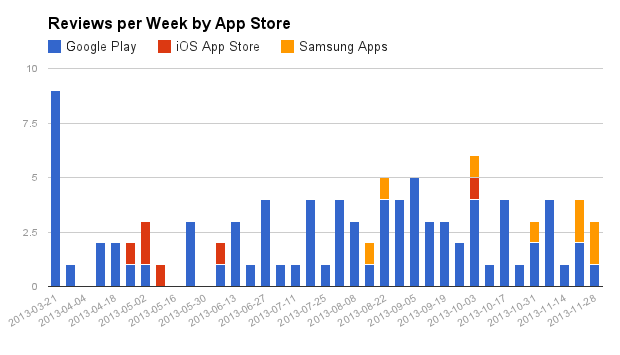 As you can see on iOS and Google Play, there’s an initial spike from friends and family. Where iOS stops completely, Google Play keeps the reviews coming consistently. Why? Well one reason is that we put in a review prompt on Android sometime in mid July. But that can’t be all of it because you can notice a clearly higher frequence of reviews before that time. Our assumption is that this is because it’s easier to write a review on the Play Store than it is in the App Store App.And if you’re wondering why we did not put in a Review Prompt on iOS: Initially we didn’t have the plugin and when we did, we just forgot about it.

As we mentioned before, we’ve tried our hand at a little Halloween update earlier this year. Here’s how that panned out in a graph of the daily downloads by platform: 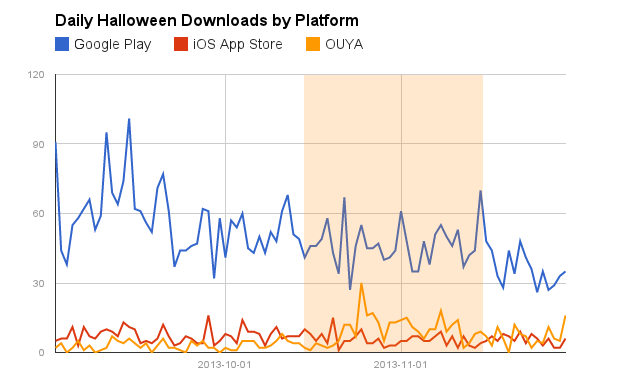 It’s a bit difficult to read with all the noise but you can see that both Google Play and the iOS App Store didn’t really move the needle much. In fact you can even see the steady decline in Google Play downloads. However the OUYA saw a spike in downloads. We’re assuming that happened because we were featured in a few of the official Halloween communications from the OUYA team.

So after all these users, how did we actually do on the money side of things? 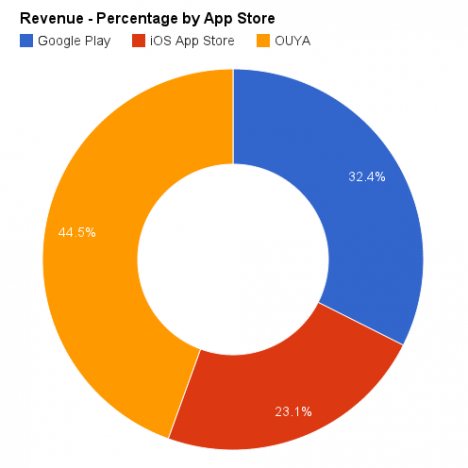 Considering the OUYA only makes up 5% of our users but 44.5% of our revenue, that’s a pretty good cut. If you’re wondering where Samsung is in that graph: the Samsung Apps version is not monetized, it is simply released without in-app purchases because we did not really have time to deal with their store system yet. 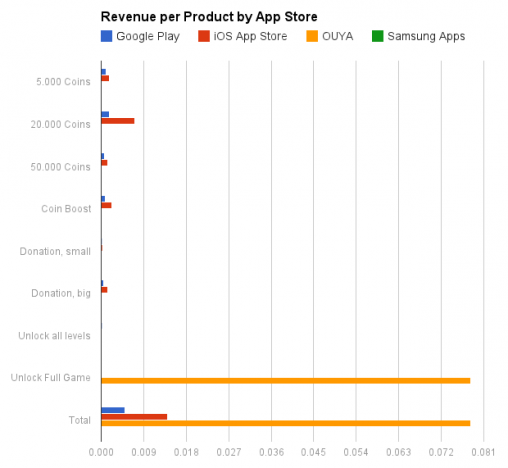 Two additional notes though: Firstly the monetization model is also different on OUYA: Instead of selling items to accelerate the gameplay experience, we only give out the first 2 levels for free. Further levels need to be unlocked in game. Secondly the OUYA team gave out some free store credit to all backers, which happened around the time of our release. We believe that this made some people more willing to spend, among other things, on Hipster Zombies.

So after all these words and numbers on the performance of Hipster Zombies, how did we actually get there? Luckily we decided early on that we wanted to track our time spent. Among the two of us Hipster Zombies took about 980 man-hours (or about 120 man-days or 6 man-months). 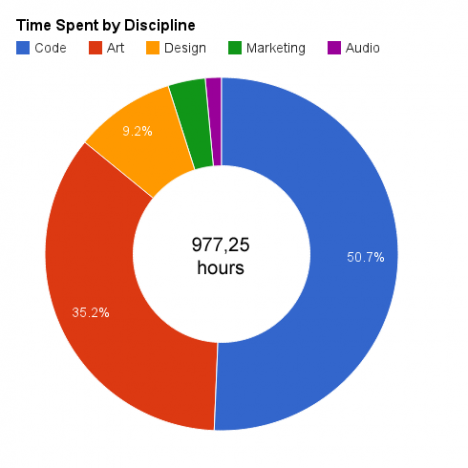 As you can see the primary part of that was code work. The art aspect was also significant, followed by design. As mentioned during the Hipster Zombies postmortem, we believe that this is actually too little time spent designing and we could have improved the game if we had kept a better balance.

So after all these numbers? How did we actually do? To be honest? Not that well…After substracting everything we only made about 315€ (about $425) in revenue with Hipster Zombies. Counting all the way up from March up until now, about 9 months later. That’s not a lot, and it’s even less if you consider how much development cost us:

Putting in an average flat fee per day for our hours spent and adding our expenses for office, audio, plugins etc. we came up with a total project cost of about 50.000€. And that puts us pretty far away from break even.

Welp, we didn’t get rich on Hipster Zombies. We didn’t expect to but the financial success (or rather lack thereof) is beyond what we had hoped for. However we’re still proud of the product. We think it’s a fun little game. And so far we managed to reach over 30.000 people with a consistently high app review score. That’s a pretty nice success in our book.

However if we ask ourselves if we would do it again, we probably wouldn’t. Not that we regret the time spent but we started Hipster Zombies as a small, fun project. A pragmatic test run for us to get used to the tech and the market. While it fulfilled these goals it also ended up too big, costing too time, energy and money. Instead the next time we’ll be focusing on a project that’s truly dear to our hearts.

And that’s it. Any questions? Any comments? Feel free to let us know what you think! We’d love to hear from you.

With Halloween just around the corner we decided we’d try our hand at a little seasonal update. Here's a look at what it is and why we've done it.

Hipster Zombies on the OUYA

Hipster Zombies is now released for the OUYA Android Console!