Emberheart is a top down ARPG Hack and Slash in the likes of Diablo, Torchlight, Grim Dawn! It’s an indie title that focusses on new and exciting gameplay systems and unique end game gameplay while also going back to the roots of iconic games like Diablo 2 for inspiration. The game is being made by a solo developer who has played and developed ARPG games for a decade! In Emberheart you’ll face viscous monsters that got control over the Emberheart, the Heart of the Mountains. It is the Emberheart that makes magic possible in the world and the enemy cannot continue to have control over this precious item. The player will go on quests to fight the mutated monsters and gain back control over the Emberheart!

It's finally that time where we can say Emberheart has been released on Steam Early Access! After 3 years of blood, sweat and tears we are finally happy with the state of the game. There's lots of items to collect, there's 3 playable classes, there's pre-end-game and end-game systems and the game feels fast and vicious. Leveling feels fast, combat starts to feel more and more responsive and the passive skill tree has almost been finalized.

We are so excited to finally see people play the game. The feedback and bug reports that will come from the players will help to make Emberheart a better game and shape it in a true unique and interesting experience. It is our intention to listen to player feedback carefully and shape up the game based on that feedback, your voice matters, so feel free to hop in the Discord and join the community in their discussions! You can find the discord server at:

If you are not yet convinced, we are happy to announce that a free demo will be coming to Steam on 7 October 2020!

While we finally can say the game is becoming what we want it to be, we realize that there is still a lot of work left to do. That's why we started writing a roadmap for the players to see what's in store for them for the months after initial Early Access release. A kickstarter campaign is planned for December or early 2021! Keep your eyes out for that if you want to support the game's development further. 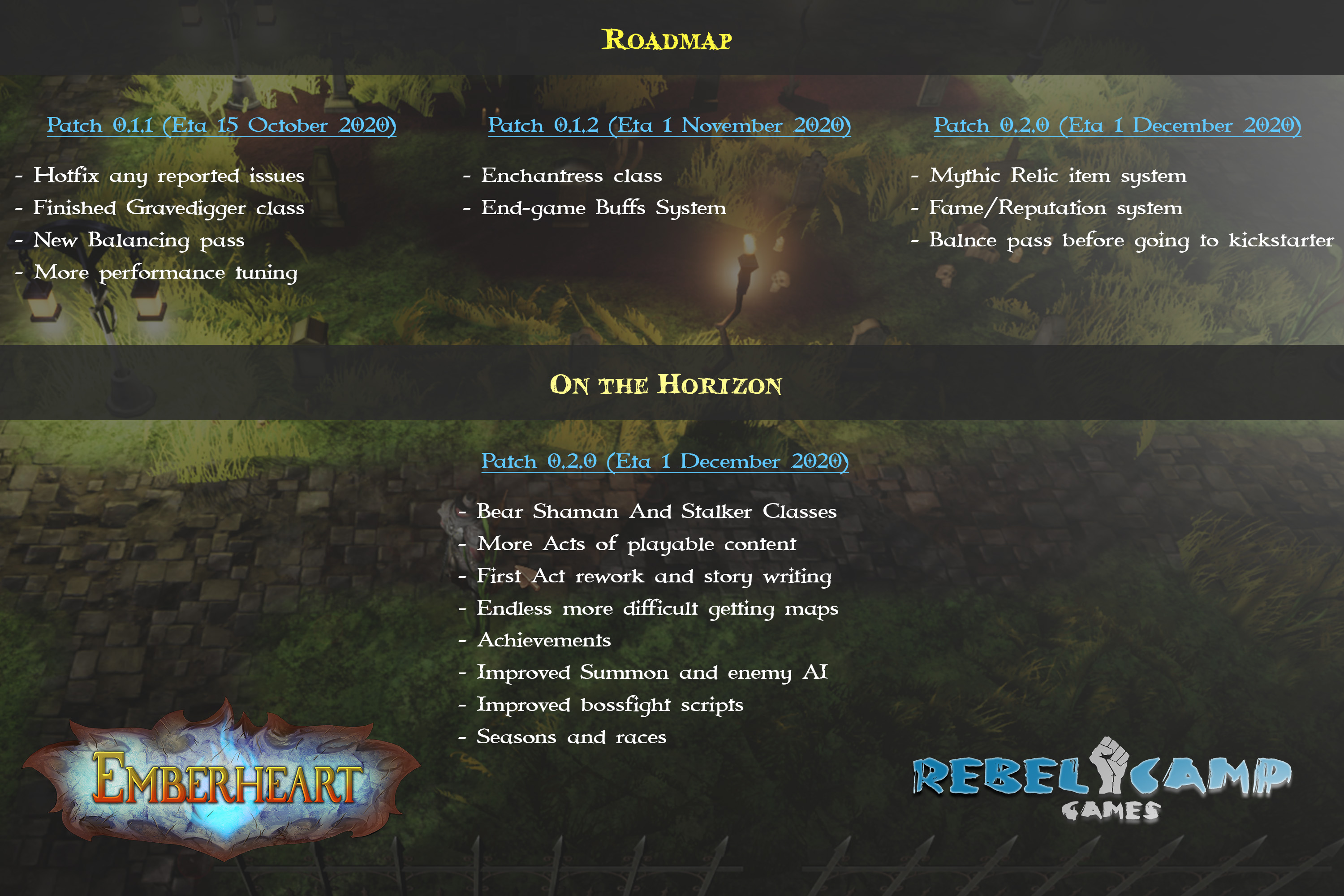 Here's the roadmap in text rather than the attached image.


We want to thank everyone for their patience and support and we hope to see a lot of you in Wraldor!

It's been an exciting month for me since the launch of the public demo! I had contact with a publisher and a possible investor and they were impressed...

With a new year came hard but also exciting decisions at Rebel Camp Games. With the year changing it was time to evaluate where I was at with my projects...

So, another week has gone by. Development on Emberheart has continued at a fast pace. The focus of this week was on finishing the Crystal Caves level...