Cyrano and the Rusty Planet 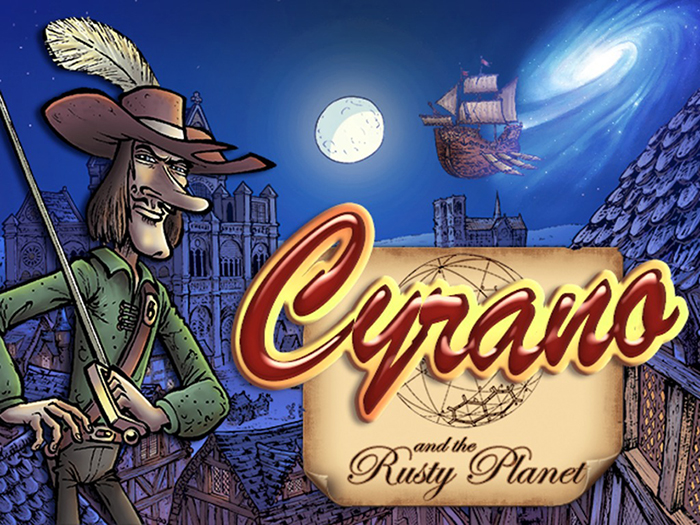 A point-and-click adventure and a space trading game with LGBT friendly content in a cartoonish 17th century filled with duelists, sorcery & flying ships. 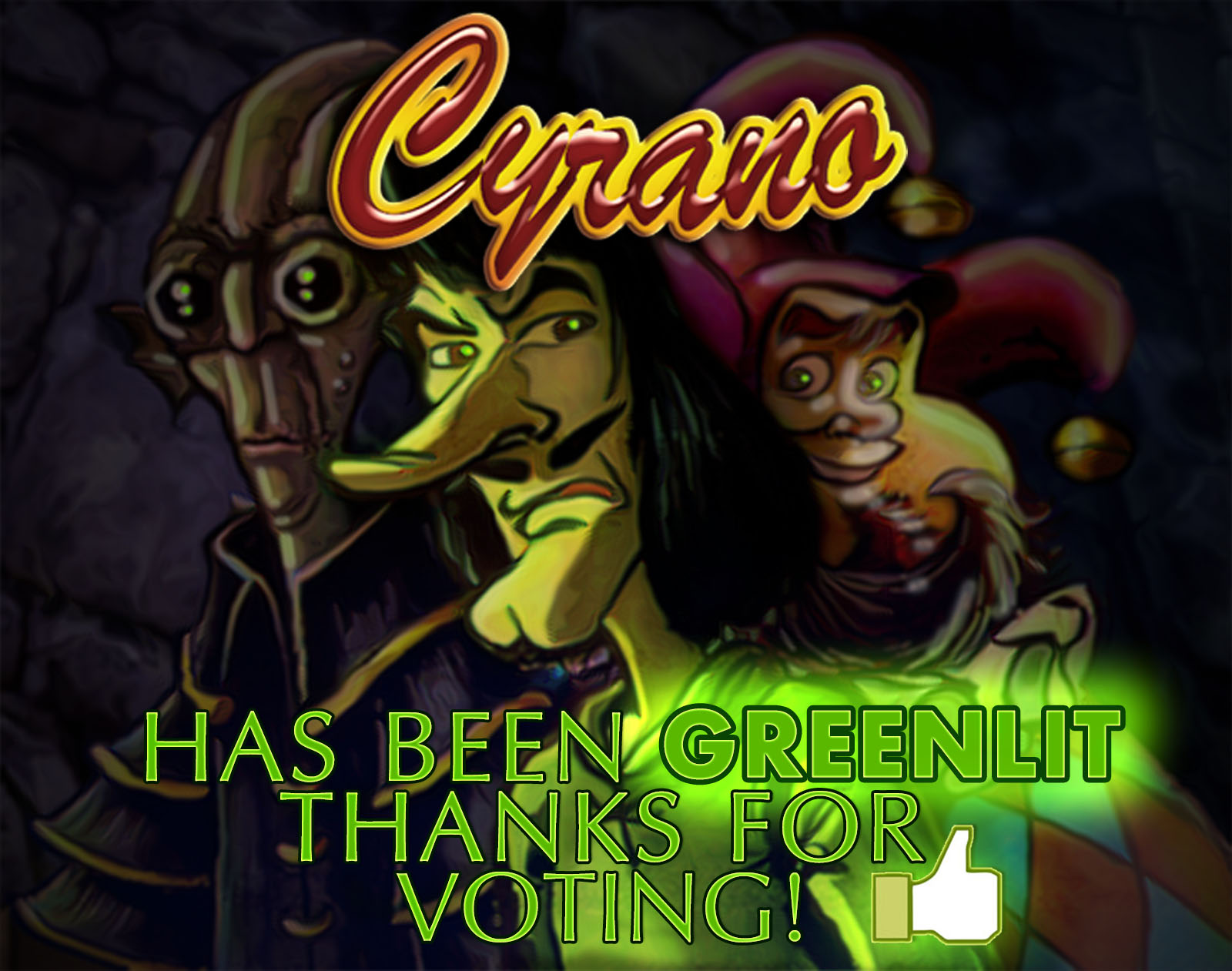 "Cyrano must be credited both for first applying the rocket to space travel and, for inventing the ramjet." Arthur C. Clarke (2001: A Space Odyssey)

Cyrano and the Rusty Planet is mainly a point-and-click adventure but also an isometric RPG and a space trading game with LGBT-friendly content for PC - Mac - Linux in an expensive and detailed open-world, a complex storyline, some unforgettable characters and a flamboyant gameplay.

The game offers an open world where you have the choice to roam, steal, quest and explore, without necessarily following the main quest. Many activities are available in the game, such as, exploration of space, gathering resources, crafting, commerce, and combat. 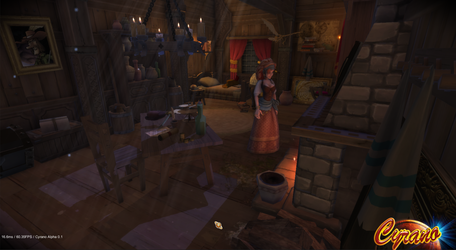 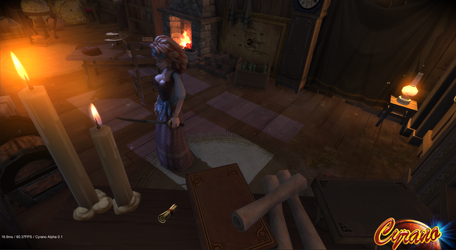 We want to bring you an amazing point-and-click combined with gorgeous graphics, a wonderful story, a great cast of colorful characters and thoughtful gameplay. 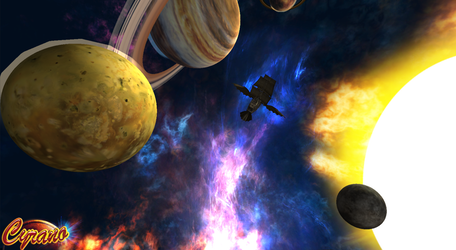 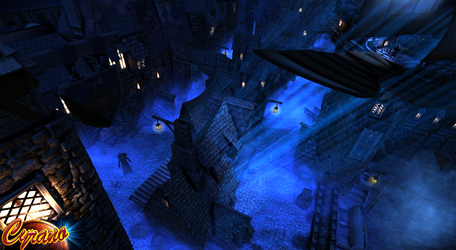 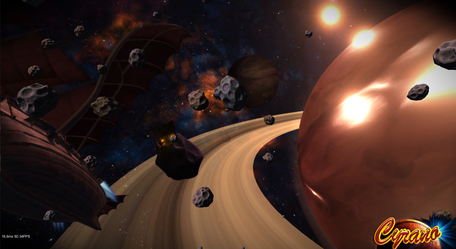 In this game you will switch between (at least) three different characters :

To uncover a galactic conspiracy, you will have to build a team, explore the massive city of Paris, find the best weapons and armors, fight Cardinal Mazarin's mercenaries and then finally... take off for space to reach the rusty planet, Mars, where lies all the answers. 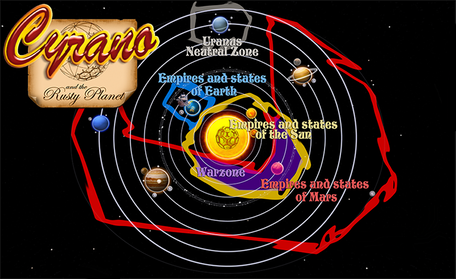 On the way, maybe you'll stop for a visit on the Moon, where grows the tree of knowledge near by the celestial city or bring you ship alonside extravaganza, the asteroid where Dassoucy, the King of Burlesque performs or run aground a space spiderweb and collect the precious silk, or even worst, get caught in the stomach of a giant star whale with a bunch of unfortunate psychopath pirates?

The storyline of Cyrano and the Rusty Planet openly reflects the reality of a fascinating unorthodox 17th century through the quest of a group of glamorous and adventurous characters despites the prejudice of the foolish inquisition and the tyrannical states of that time.

In fact, in the French 17th century, the free society (the bourgeoisie) was quite open-minded and likewise similar to England, we see a rise of a Gay Community, transvestism and lesbianism during that time period.

Cyrano and the Rusty Planet is a point-and-click adventure but also a RPG and a space trading game at some turning points in the main story. Also the game often uses the comic book format to move through the storyline .

In term of gameplay, Cyrano and the rusty planet is a 3D point-and-click, but it also has its own distinct style of gameplay and while give you the ability to shape the game's world by it's actions. For example, if you decide to cut the tree of knowledge on the moon, all the Selenians will lose their magic abilities but will hunt you down through out the entire game!

Exploration, freedom, emotion and conflict are the master words for this great adventure.

Each character can be customized, both during creation and throughout the game.

Through an experience system based on battles, quests and exploration, characters advance through levels and develop their skills. The player can follow side-quests, interact with NPCs, kill foes and travel anywhere in the solar system.

Selenian are known to be very good astronomers.

You can avoid the main plot as long as you want and just content yourself with exploring, buying and trading cargo at the various outposts to earn enough money to equip your ship with better systems.

Prior to battle, the player can manage character equipment and abilities, and then select which available ship to bring into battle. On each turn, for each warship, the player can move and then perform an action such as ramming, firing heavy or light artillery (culverins, ballistae, cannons, mortars, etc.), casting a spell or using an items. Different ships move at different speeds, and turn at different rates.

♛ Open exploration of the whole city of Paris and the entire Solar System (moons and planets).

♛ Non-linear gameplay and greater mission variety with many side quests.

♛ Shape the game's world by your action.

The origins of Cyrano and the Rusty Planet - Dev Diary #1 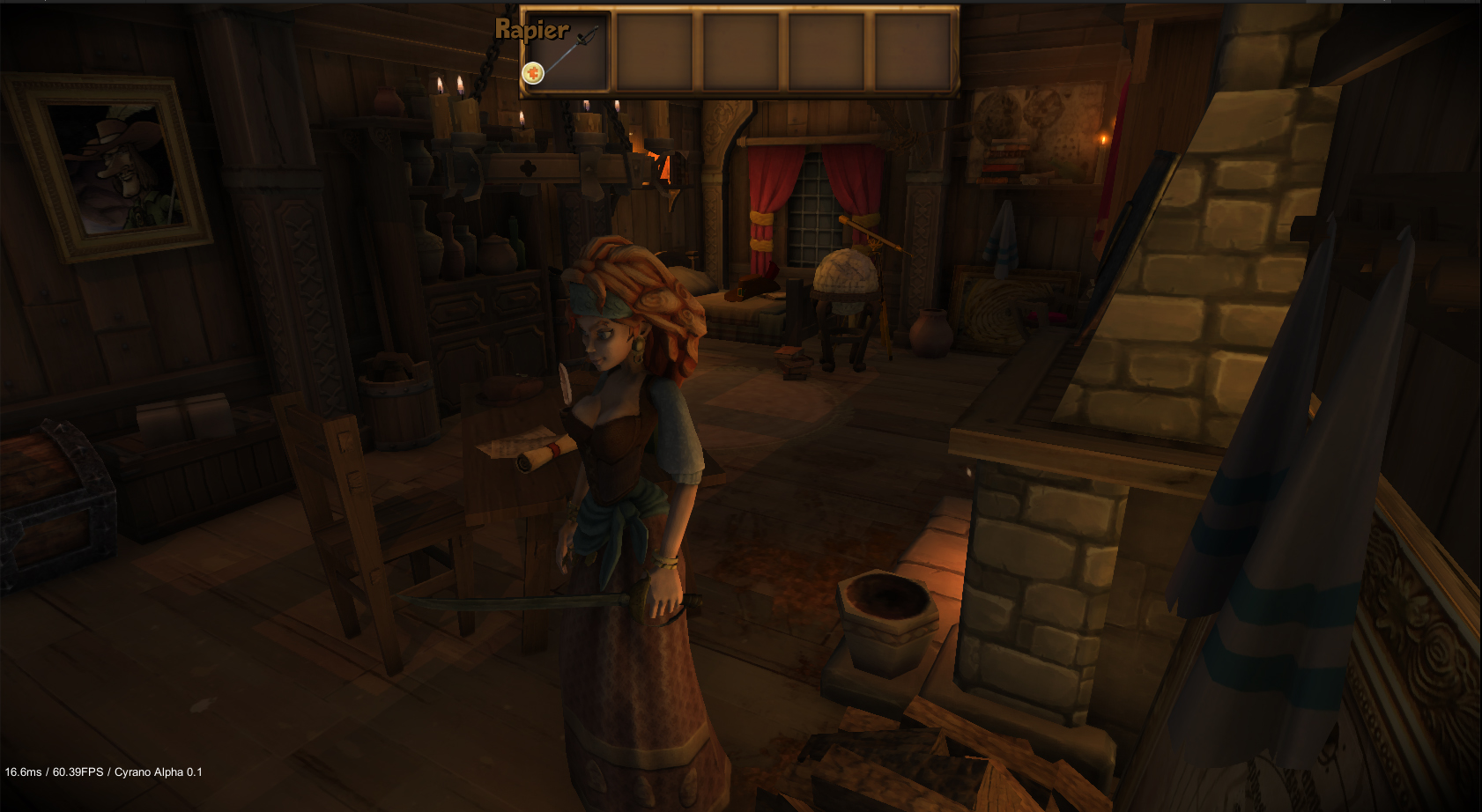 Cyrano and the Rusty Planet - Act I: The Basket Case

In 2008, I was working with some French illustrators on a new comic book: Cyrano and the King of the World. A story about an alternative and cartoonish 17th century filled with duelists, sorcery & flying ships. We were all exited about the project but, at that time, I had to focus on other things and we all lost our window of opportunity. 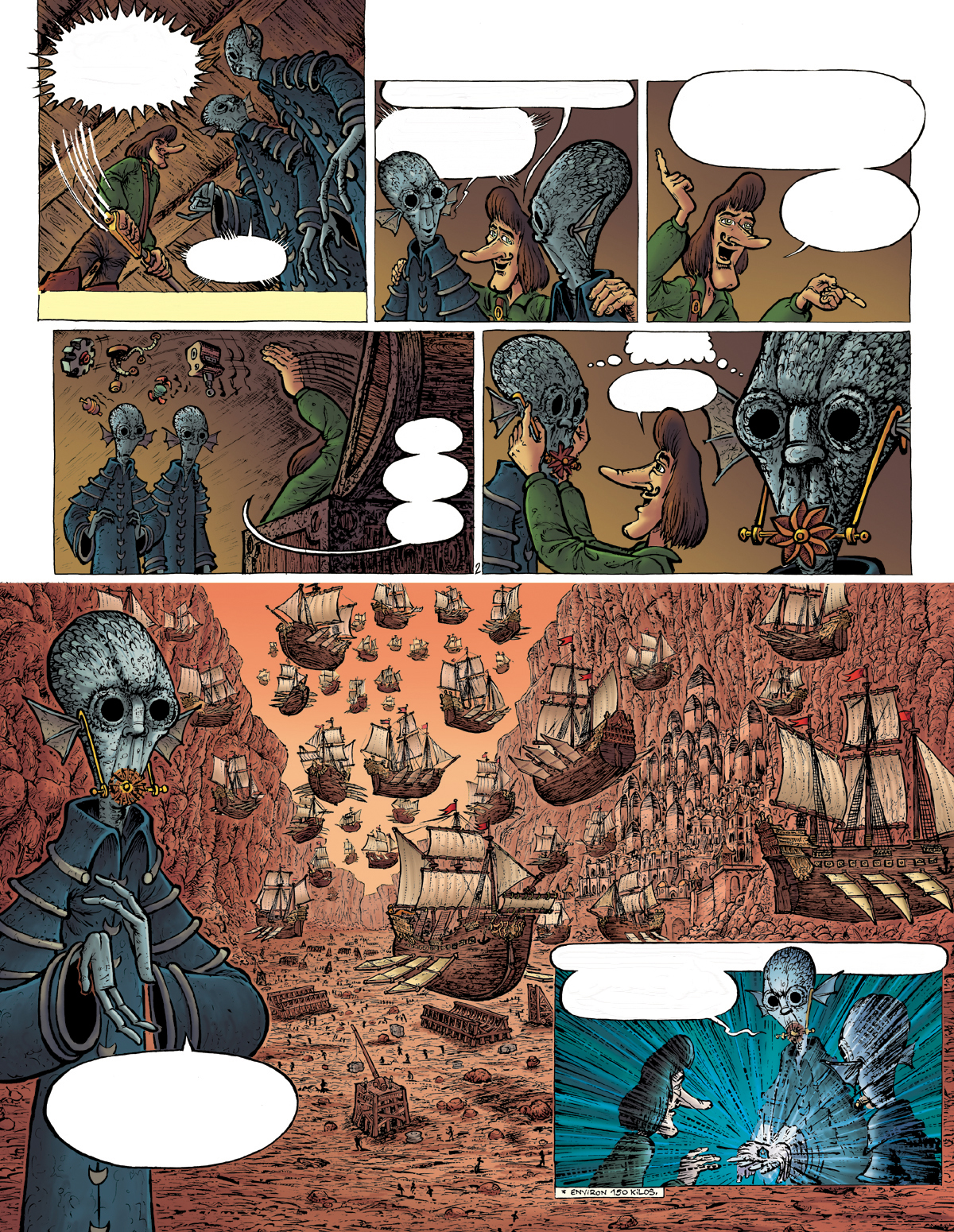 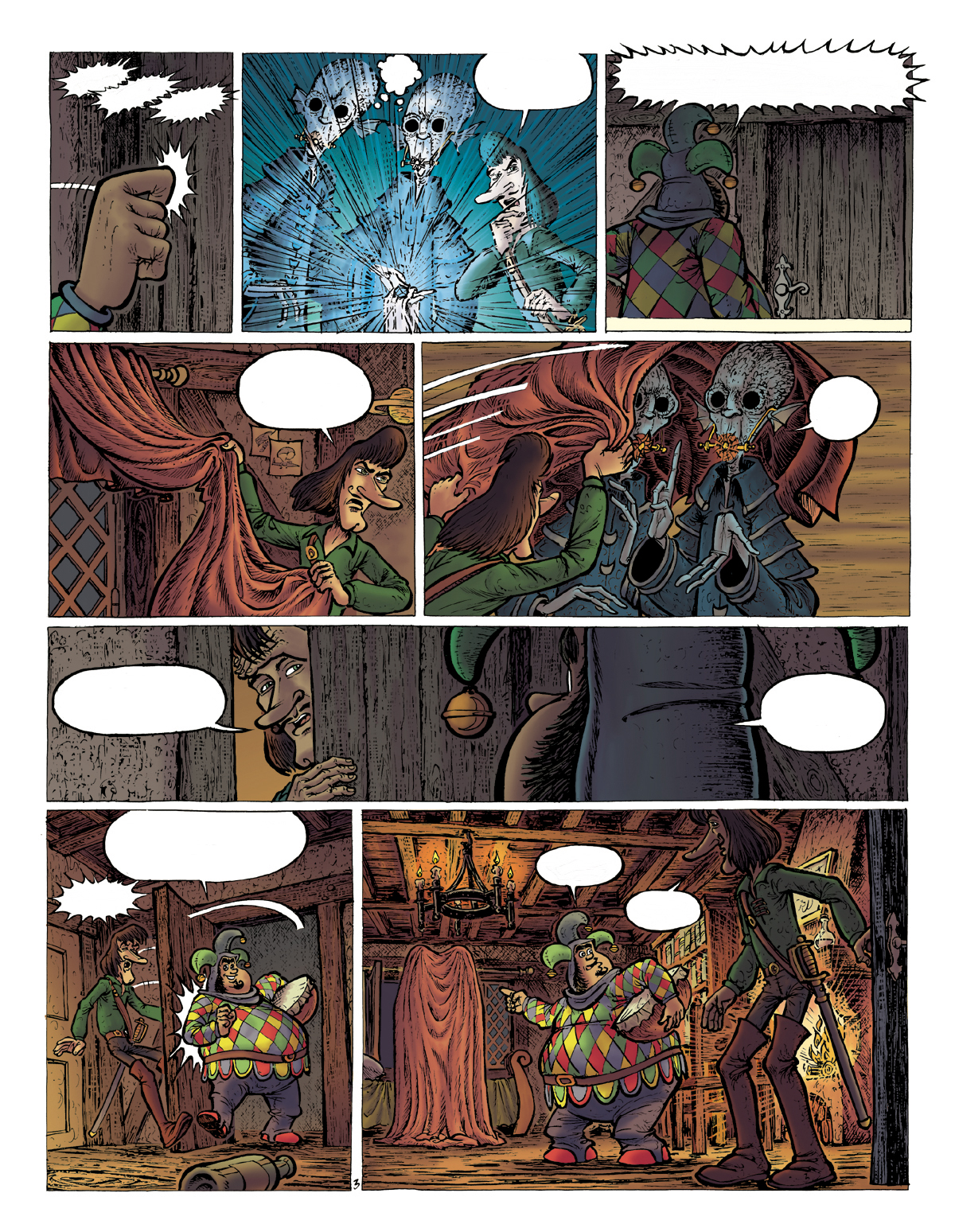 Cyrano and the King of the World - Comic Book

A few years after, as I was digging through piles of documents, here they were... a dozen pages of Cyrano and I knew immediately that it should be a game. An adventure with a good scenario but also a game that offers an open world where you have the choice to roam, steal, quest and explore, without necessarily following the main quest with many activities, such as, exploration of space, gathering resources, crafting, commerce, and combat. 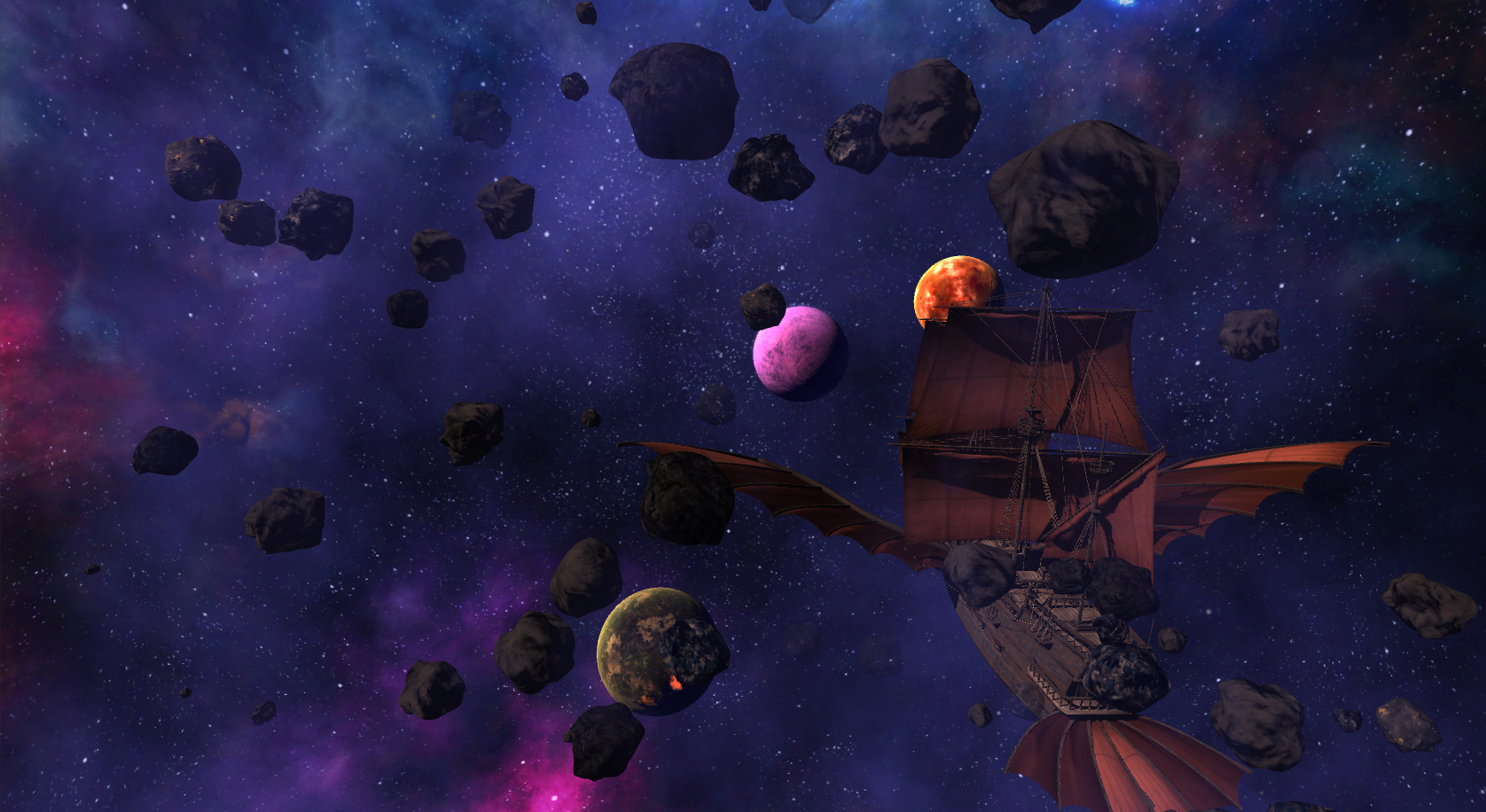 So I started the layout with UNITY. I used to work in the video game industry in the 90's and the early 2000s as a game designer but this time, it was different, I was going to be alone! After two years and with the help of UNITY forums and the Asset Store, I was able to finish the shape of how the game would look like. 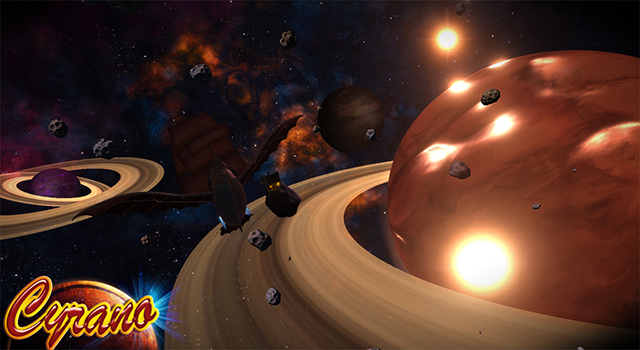 Cyrano and the Rusty Planet is a hybrid: mainly a point-and-click adventure but also an isometric RPG and a space trading and exploration game with LGBT-friendly content for PC - Mac - Linux

A detailed open-world, a complex story line, some unforgettable characters and a flamboyant gameplay. 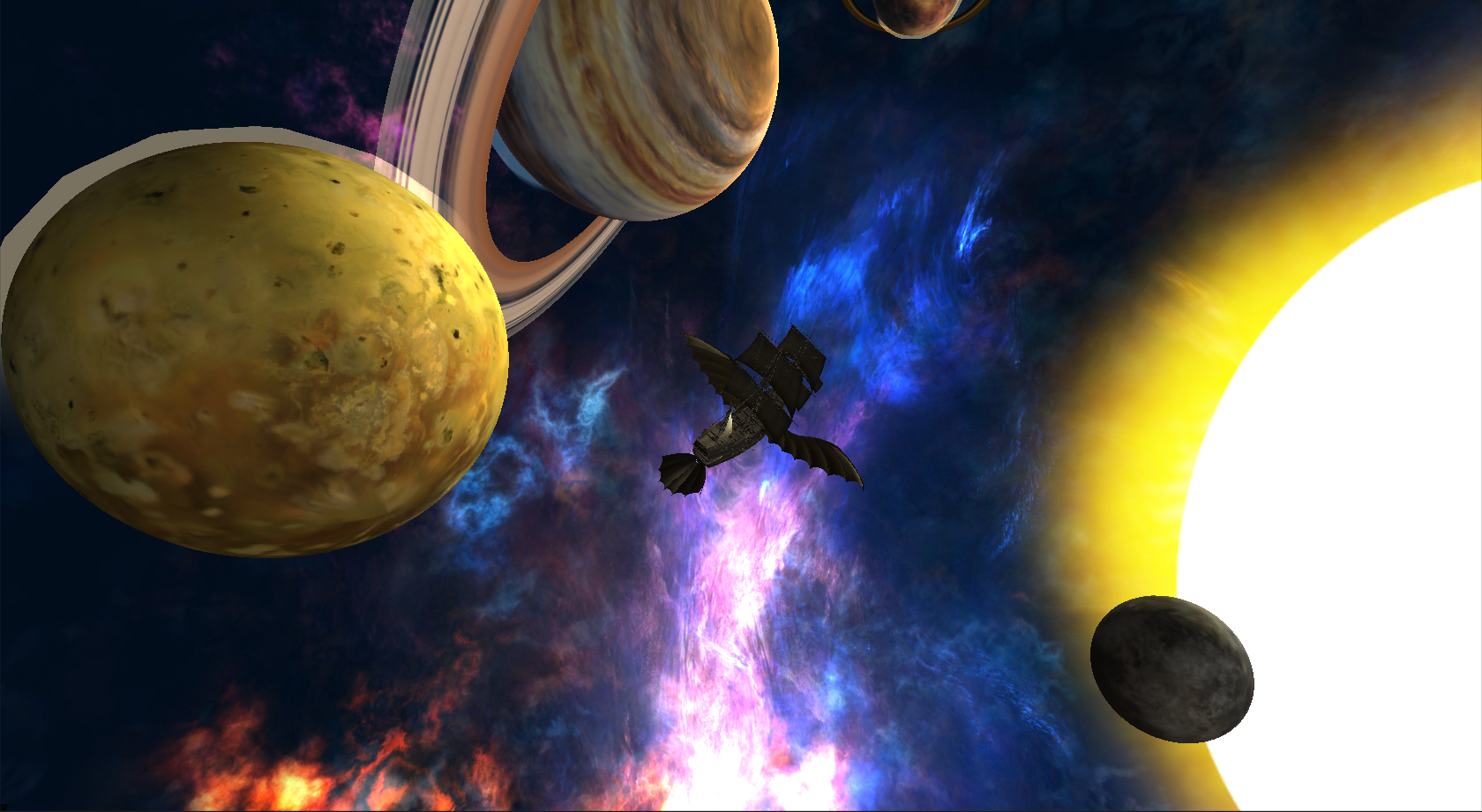 What needs to be done?

Although we already have a lot of indoor environments ready, there is still tons of work:

* The creation of new 3D models and characters

* The voice over and lip sync

That's it for today! Hope you enjoyed the update..

THANK YOU for your attention and support!

Indie
Twitter
Tags
Embed Buttons
Link to Cyrano and the Rusty Planet by selecting a button and using the embed code provided more...