Cubicverse is a full role playing game running directly in your browser, doesn't require any plugin and yet offers an experience similar to those isometric role playing games which made history. The game includes an infinite 3D procedurally generated world mixed with staff and user created maps.
You can walk seamlessly across the whole world, never having to wait for a map load (unless you teleport yourself), and yet explore our ever growing universe.

The game runs in an alternate medieval fantastic universe, where magic exists but will require some efforts to gain, where you are able to craft your own items or gather them from your adventures and combats, explore mines and dungeons, meet new people and follow quests and missions.

However the game doesn't stop here, it also offers an area open to player modifications, letting them modify the map at their will, create their own missions and stories and let other player visit it.

The game is free to play, forever, with later on a premium membership which will unlock special abilities.

Join our Telegram chat group at T.me and join the conversation!

The work on Cubicverse is not slowing down, actually I could say all the reverse. Last week was even a particular week with the release of the game client, and posting Cubicverse on steam.

A game client has been produced to access directly the game without any browser installation, without having the browser decoration and yet having exactly the same features has the browser game. We decided to offer it, and hope some of our players will enjoy it: Indiedb.com

To make more people aware of the game we also invested some money to try to publish the game on steam, even if the chances are pretty, being due to the limitation of the technology, the kind of game or other reasons. Anyhow if you want to support us, please go on steam and vote for us: Steamcommunity.com

A new GUI has been developed to make it cleaner and let the game use more space on screen: 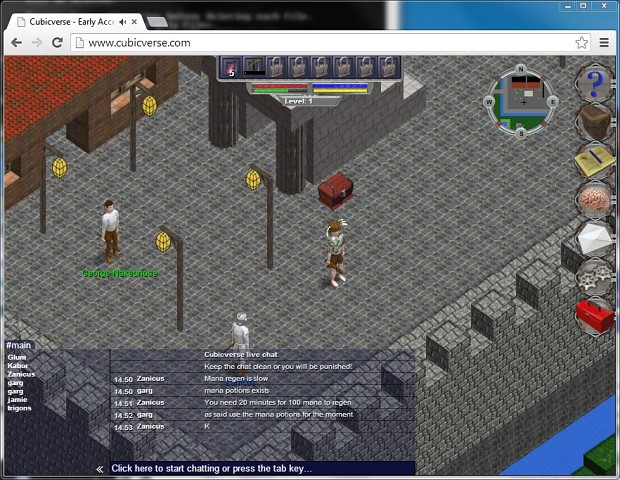 A lot of new features have been added, from information panels, to NPC logic, and NPC moving around to give more life to our virtual world. (Those are available as player too)

New quests have been released to keep you busy, with the addition of new quests writers to help us.

New monsters have been added for example this quest monster here (red daemon):


Without speaking about all the small changed and bug fixes we did. Therefore if you didn't tried the game yet, it could be the right time to check it out, or if you tried already well, why not try to spot those changes inside?

What would be an heroic fantasy game without magic? Well, not something I would personally like to play. Cubicverse however has been first released without...

The project, even if it is playable, and should already offer some good content, doesn't contain yet all what we have in mind. Check out our road map!

A game client which let you play the game directly and doesn't have any browser decorations.

Everyone please join us on Telegram by going to T.me and take part in the conversation!

Hello. We have been experiencing technical difficulties with the server that Cubicverseis being hosted on. We are going to be creating a new hosted server and move the game files over to it and will be up and running before we launch officially using the Ethereum based gaming token called Flux Coin.

Hi everyone, It has come to my attention that Cubicverse is not working properly in 3D so I will be transferring it over to 2D since its made in both 3D and 2D. The 3D version seems to not have the castle in it where the players first come to and also there is suppose to be an NPC that is in the castle that is suppose to help you move forward with the in-game tutorial which is not there as well and I am not for sure if changing it over to 2D will work but I am going to either try to do that or fix the 3D version. So if you all could just give me some time to fix this that would be great and I will keep you all posted.

Hi, just an update to let you all know that cubicverse is now a medieval themed virtual country which is a kingdom with the owner as the king and if you would like to become a member of the kingdom's government you can contact me through skype at austinrowe1028.

Hi, I am just letting everyone know that Cubicverse is up and running again at cubicverse.com and it is under new ownership as of December of 2015.

Hi, I am here to let everyone know that I have bought Cubicverse as of December 2015. I plan to release the game soon but there has not yet been a release date set but when it is I will let everyone know on here and other forums. Also I plan to add a currency exchange program in-game to allow players to buy in-game currency from the game itself and then sell it back to the game if they choose to do so. Also I plan to keep the donation section open for players to donate to help me pay to hire developers to help better the game and also to make a small salary from it since I need to make some money I can't just lose money from the buying of the game so I will be taking a portion of the revenue which I will let everyone know on our soon to be community forums for Cubicverse how much the game is making and where the funds go because I want everyone to be apart of knowing how the game is performing and such. Also just to let everyone know as well that in the beginning I I may be taking more than later on to recoup the money spent and to give me a bit of a salary for administering the game and helping players out with their questions and just anything that may come up that requires a bit of time. So thank you to all who are interested in Cubicverse and want to play once it is released and if anyone needs to contact me please do so either by email at austin11rowe@gmail.com  or by Skype austinrowe1028 and please put Cubicverse in the title so I know that's why your contacting me or I may not respond.

Nice to see someone making a throwback. I could see the influence but that's okay. I was an Ultima Series fan as well.

I'm looking forward to see where you take it.

The engine and design reminds me of Ultima Online, right down to the radar. Any influence?

I always have been a fan of the Ultima series, while Ultima Online a bit less so. So certainly the isometric idea do come from Ultima 7-8 while... here the world is a full 3D world (like a voxel world).

Also, the game will focus a lot on player content, while in ultima you could not modify the world nor add your own content.