Codename Next Garden is a working title and will change closer to release. Humanity has lost it's home. Evacuating earth in large colonization ships looking for a new place to settle. The humans found other species, some friendly, other aggressive. The universe is your playground. Change how your character, your spaceship and your trusty AI companion look. Also, you can design a spacestation or use a preset spacestation and construct it in game. Build an empire with your allies and destroy the opposition.

So, what's happening? been silent for a while..

We have cleaned up the project. Seemed like a good time to remove everything that we don't need, want and generally take a good look on the project.

We have also improved menus, added in some graphic options into the client. 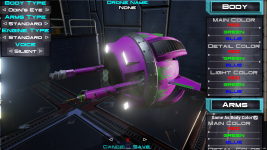 (I am still improving the menus. Making it 3d and changing the look.)

Raven is working on the spaceship and there will be screenshots of it later when it's closer to done. You guys will just have to wait for a while because this will take some time. (BUT, It's looking awesome so far :D)

Also, I am working on making the spacestation system both easier and more advanced :)
(Instead of screenshots I will upload the new system when it's ready to be abused).

I want to let players use premade room forms that they can scale up and down for people that don't want to use time on creating spacestations but rather want to make something functional to use in game.

When, the system is working a lot better I will look into also adding a randomise button for those that just want to have something unique. But, really don't want to make it themself.

I have also been working on a save/load system for the spacestation system. So, that when you have made something, you can easily construct it in the actual game.
Also, the save/load system will let you share it with other players and use it later when the gameplay is in the prototype.

I have been thinking that when the spacestation system feels right that I will reupload a new version and most likely we can have a competition with some prices of sorts.

Either way, we are still working on the project. But, we are at a point in the project where it will take some time before we will share any new content.
Next prototype upload will include mac and linux. Not only windows as earlier versions.
Also, don't be a stranger. Please post in the forums if you want to ask questions or just want to chat.

A real update on the project.

As most you would have guessed we posted an april's fools post yesterday. What's really going on is that we are working on the public prototype and hopefully...

LATEST UPDATE on the game!

Company Status: We are proud that we can announce that we been sponsor by the great leader of North Korea and the true leader of the world, Kim Jong-un...

Remember to vote in
Indiedb.com
we are getting release close to some kind of tech demo and need your help to find a name.

Just here to say that game is going strong. We have implemented the spaceship with customisation and added weapons ( for spaceship) and added multiplayer.

There are a few hundred other things we have added and polished.

Stay tuned for an upcoming in game video the next few days/weeks.

You will not be able to host a game or play the actual game.
You will however be able to join our server when we host one later. This makes it easier for us to test multiplayer when we get to that part.

I am also looking into finding/creating a launcher that will update the game so you won't have to download the whole client all the time.

Main reason for this upload is because I just have to do it. No matter the state the game is in. Because, I can work on this for a whole year and still feel that it's not good enough.

I like the look of this game and can't wait to try it out, good luck!

Thanks! we are working hard for a early prototype, hope will get it done soon :)

We are working hard on finishing the main menu, customization and getting things up and running. Hopefully we will have a video to show you all in 2-3 weeks.